Poor Andrew stayed up until around three o'clock this morning working on a couple of papers that he has to submit tomorrow. I went to bed with Zoë around one o'clock (after admittedly staying up too late working on a dog costume). At 5:30 in the morning I was shocked awake when Zoë turned into a fire hydrant of vomit (one of the dangers of co-sleeping, I suppose).

I don't know why I was whispering, precisely. The darkness or the hour or the fact that we'd all been blissfully asleep seconds before seemed to call for it.

What I wanted was fresh sheets. What I got was a towel over the vomit and Andrew's side of the bed (he left to sleep on the couch...again (he slept out in the living room with Benjamin and with Miriam while they were sick and last night was his first night two hours back in his own bed)). As it turned out fresh sheets would have been a real waste since Zoë would go on to throw up about ten times.

I grabbed a stack of towels from the cabinet and put one underneath her. When she'd throw up, I'd switch it out for a new one. She and I stayed in bed until around noon, sleeping, and vomiting, and just lying there miserable while a pile of dirty towels mounted behind us. Benjamin did a great job fending for himself after I put a show on for him. 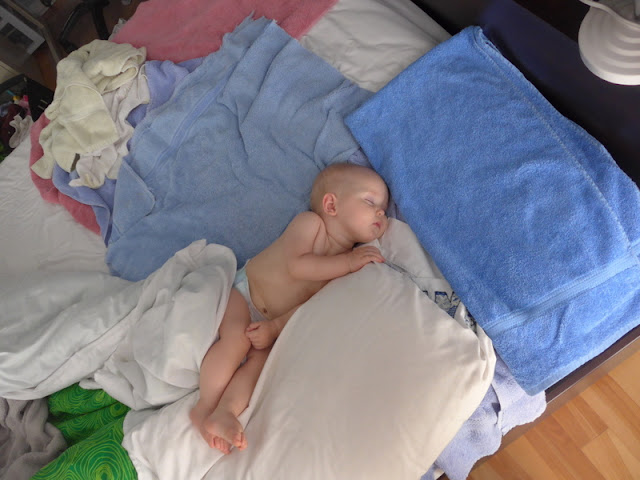 When the worst of it was over Zoë and I emerged from the bedroom and I told Benjamin that he couldn't have any more shows. And then I settled down in my rocking chair with Zoë, a bowl, and a towel and we watched Sesame Street videos for another hour. Sometimes the brain must rot for the body to heal, right? We've had so much screen time in our house the past few days! 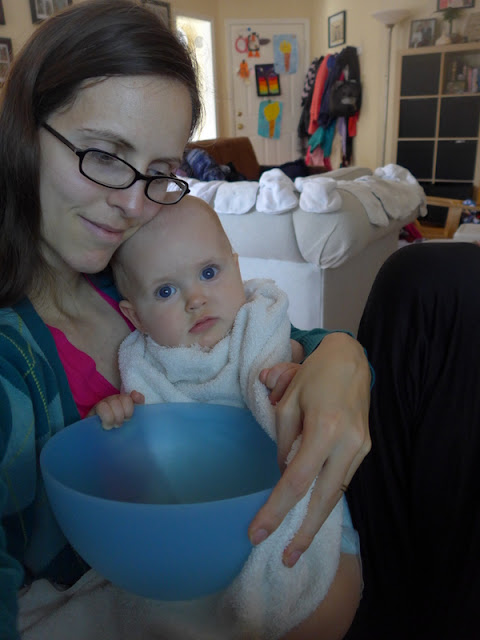 It's been so beautiful that we couldn't help but go outside. I set up a little play hut for shade and we hung out on the deck. I fed Zoë a little bit (that was difficult because she likes to nurse a lot!) and when that didn't come back up I went ahead and nursed her to sleep for a quick afternoon nap. 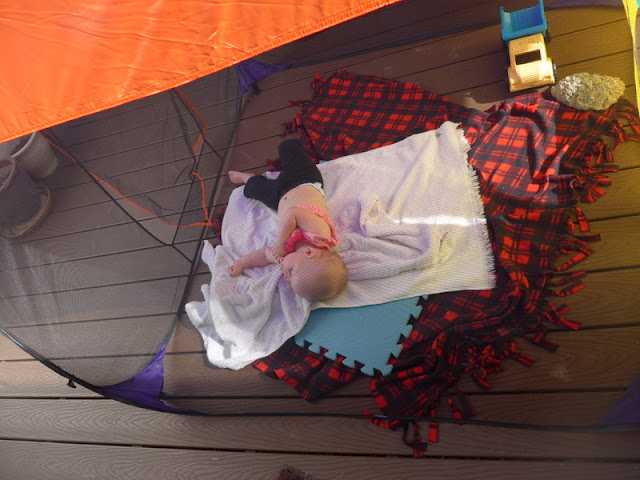 I put her outside, hoping that I would have time to eat a little something and strip the sheets off my bed, but all I got was the eating part. I managed to eat half a yogurt before she woke up again.

Doing the laundry from all this mess has taken forever (in fact, my sheets are still in the washing machine) but we're slowly going through it. I think I folded about three loads this afternoon and there's another load on the couch and one in the dyer and one in the washer. And I suppose that's a doable amount on an ordinary day, but not so much when you're battling a stomach bug.

I'm feeling a lot better, but was still a little out of sorts this morning (so I didn't mind having to rest beside Zoë).

When the girls got home from school I had them help me put away laundry and take out the trash, and then I fed the kids dinner outside, which is something they've been begging to do since we've had hints of springy weather. It didn't matter that dinner was peanut butter and jam sandwiches. They were thrilled. 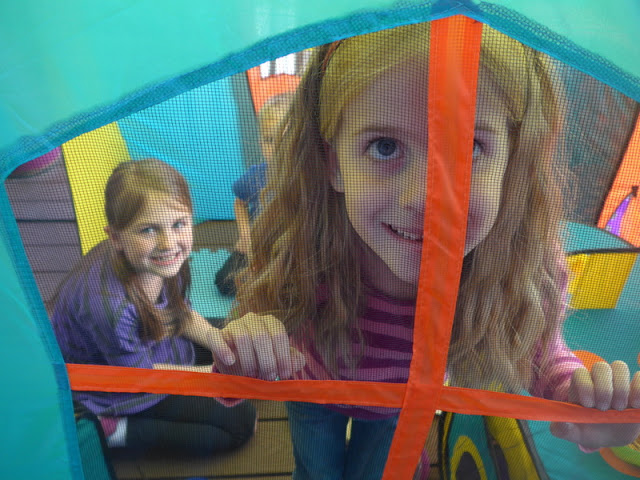 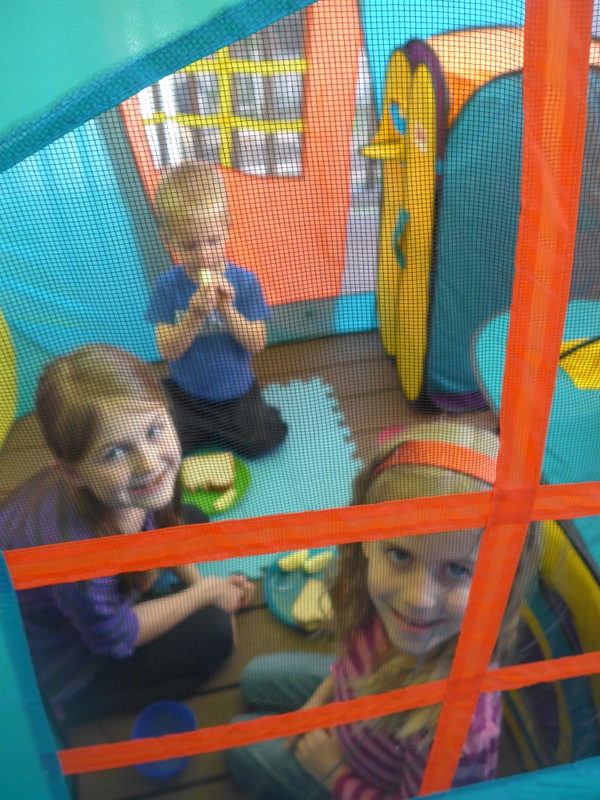 As soon as Andrew got home we had to leave for rehearsal. The way we worked it out was that we'd all go to the stake center, and then the kids would play in the nursery while Andrew worked and watched Zoë (and Rachel could help watch Zoë, too). That way if she got desperate to nurse, I was in the vicinity, and Andrew would only miss out on one hour of potential working time, rather than the whole three hours I'd end up being gone.

What happened was that the kids wouldn't play and Rachel got sick and Zoë screamed the whole time, so they ended up leaving early and I got a ride home with a friend.

I should have just left all the kids with Andrew at home and not even tried!

Miriam was the one who came in to tell me they'd be leaving. I told her that was fine, but to bring me my phone from the diaper bag and put it with my shoes.

"Where's the diaper bag?" she asked.

"Where are your shoes?" she asked.

"Right there by my water bottle," I said, pointing.

But I never saw her come back.

Later when we were sent to the back of the gym to practice some dance steps I saw my phone lying on the floor so I picked it up and put it with my shoes. About ten minutes later Andrew poked his head in the door.

"Did you find your phone?" he asked.

As it turns out, Miriam just opened the door to the gym and slid it across the floor. She started crying when Andrew pulled onto the freeway because she "never gave Mom her phone!" Even after they fixed that she continued to cry all the way home and was still weepy when I got home.

"I'm sorry I didn't give you your phone," she wailed when I walked into her room to check on her.

I told her that I was a little worried when I didn't see her come back, but that I had thought of a million solutions (okay, two): I would borrow a phone to call Daddy to see if he had my phone, and if he didn't then I could call my phone to see if I could hear it ringing. But ultimately it was just fine because I spotted it on the floor. It wasn't even a big deal; I just wanted it to text Andrew to tell him when I left so he would know when to expect me home reinforcements.

So here we are now, with Rachel in agony on the couch, binge-watching Star Trek... 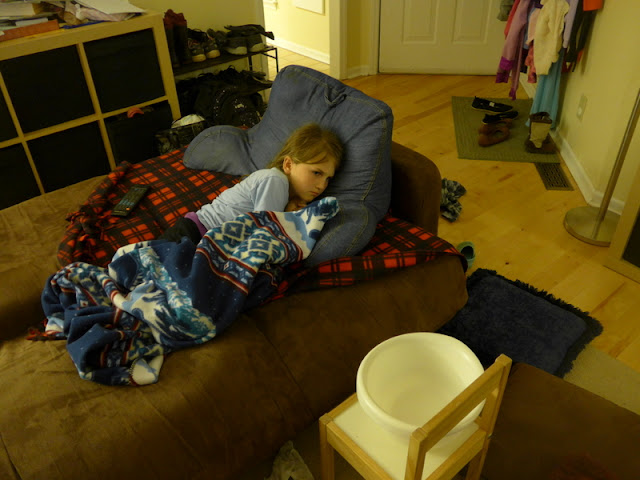 And Zoë is acting like she napped a lot today, crawling around and getting into everything, so we've barricaded her out of the sick room using the bench from the table and a couple boxes of toys (the couch helps, too, I suppose): 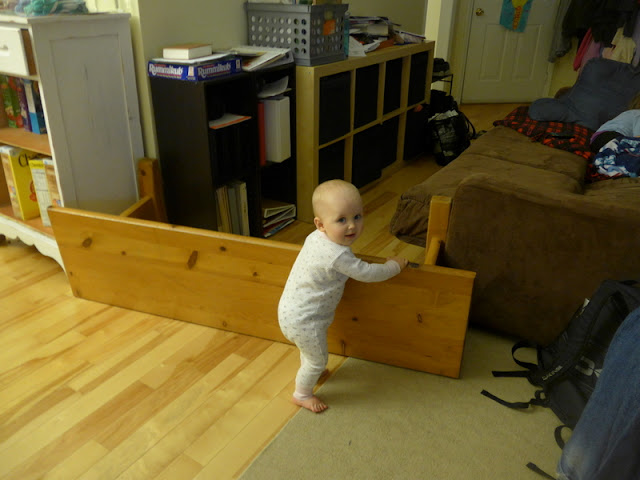 Soon this virus will have cycled through our entire family and we should be free of it! Let's just hope Andrew manages to finish these papers before he succumbs.