It's always fun when Grandpa comes

Zoë took about a week to warm up to Grandma. I left the kids with Grandma on Wednesday last week because I had dance practice, which means two solid hours of dancing. I've been getting away with holding Zoë on stage through most of these rehearsals but I simply can't dance for two hours while holding her. So even though she'd just met Grandma, I left her anyway, all alone (Andrew was out of town).

So I took her to rehearsal with me on Thursday.

"She's just gotten used to me and now we're going to introduce her to another new person," Grandma said.

And then we wondered how Zoë would react when she (re)met her grandpa. Would she be shy of him for the whole week? Or would his baby-whispering ways win her heart outright?

We found out today when Grandpa texted Grandma around 10:30 this morning.

The kids were so excited that Grandpa was on his way and reminded Grandma that she has the Find My Friends app on her phone so that they could follow his progress. Rachel took Zoë and Benjamin outside to wait for him when we saw he was getting close.

He pulled up in his rental car, stepped out of the vehicle, and Rachel handed him the baby.

And that was it. 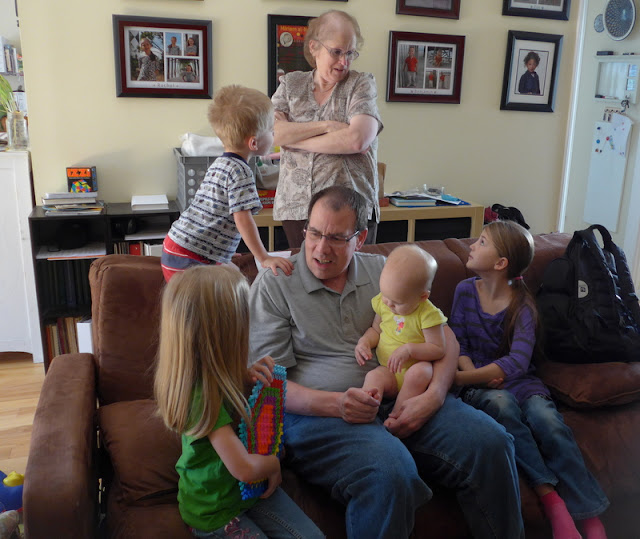 Zoë thought he was the best thing. He carried her around for a bit and she didn't even reach out to me, which is really weird. Not even Andrew can hold her attention like that. Zoë was perfectly happy with Grandpa, though, so he plopped her in her stroller and took all the kids to the park.

Later he and Grandma took the three older kids on an outing (shopping, to their hotel, and to Pelican's) while Zoë and I took a nap together.

And then he and Grandma watched Benjamin and Zoë while Andrew took the me and the older girls to play practice. And she didn't scream the whole time I was gone (though I hear she still did some screaming).

This (Zoë liking anyone besides me) gives me hope that this baby might one day not need me quite so much. I love the stage she's in, and I love that she's cuddly, and I love holding her. But sometimes she gets a little needy and clingy and I feel like all I ever do is hold her and feed her (because it's true—sometimes that is all I ever do).

Anyway, we're looking forward to spending a lovely week with Grandma and Grandpa at the beach, away from our daily stressors (and play practice (though part of me is also sad to be missing so many rehearsals because I know I need the practice as much as anybody)).
Posted by Nancy at 1:02 AM