We dyed Easter eggs on Saturday afternoon, a task my children took very seriously so don't mind their lack of smiles! 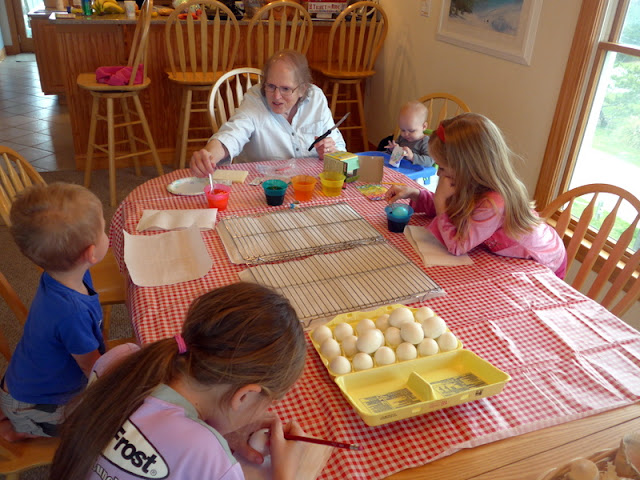 Waiting for the colour to deepen... 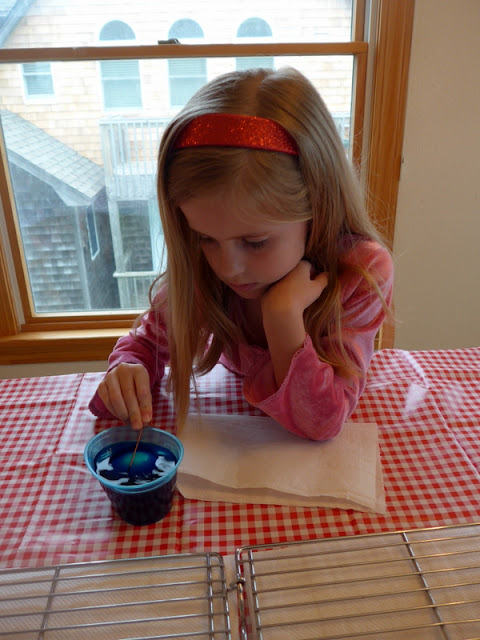 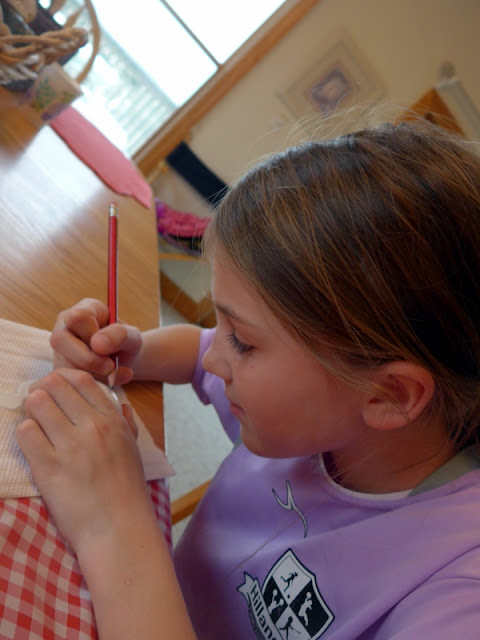 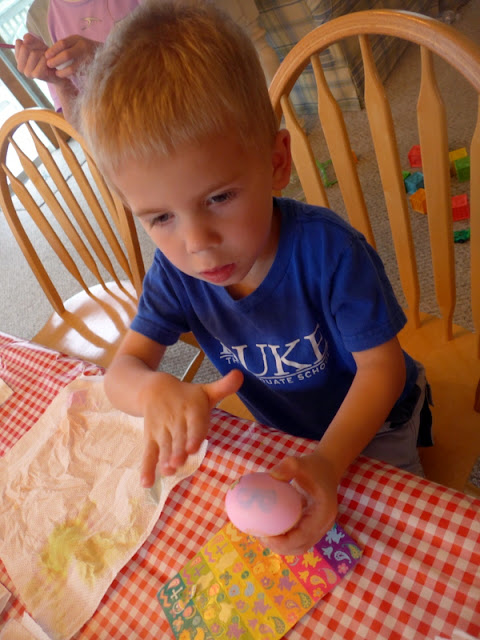 Here's a smiling Miriam ready to show off one of her works of art: 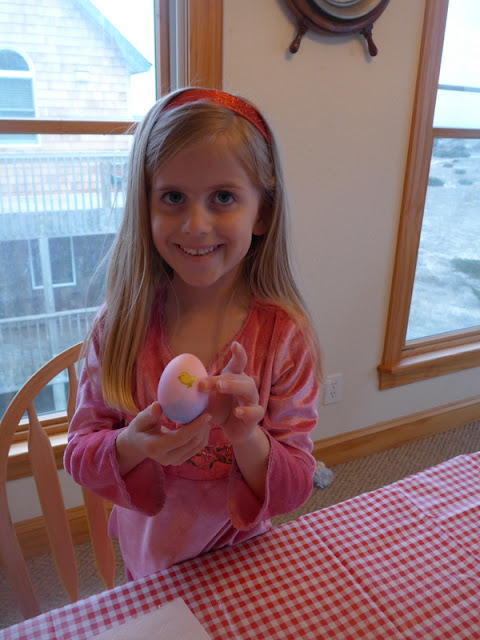 We got up this morning and headed out to Nags Head to attend sacrament meeting. That poor little church building was bursting at the seams! Their chapel has a divider curtain right in front of the stand, which separates the chapel from the cultural hall, which is also rather small. The room was packed and they'd set up overflow seating in the Relief Society and Young Women's rooms.

All those Mormons on vacation!

I especially enjoyed a talk one woman gave about finding peace through the atonement. She told the story A Picture of Peace:

There once was a King who offered a prize to the artist who would paint the best picture of peace. Many artists tried. The King looked at all the pictures, but there were only two he really liked and he had to choose between them.
One picture was of a calm lake. The lake was a perfect mirror, for peaceful towering mountains were all around it. Overhead was a blue sky with fluffy white clouds. All who saw this picture thought that it was a perfect picture of peace.
The other picture had mountains, too. But these were rugged and bare. Above was an angry sky from which rain fell and in which lightening played. Down the side of the mountain tumbled a foaming waterfall. This did not look peaceful at all. But when the King looked, he saw behind the waterfall a tiny bush growing in a crack in the rock. In the bush a mother bird had built her nest. There, in the midst of the rush of angry water, sat the mother bird on her nest in perfect peace.
Which picture do you think won the prize? The King chose the second picture. Do you know why?
'Because' explained the King, 'peace does not mean to be in a place where there is no noise, trouble, or hard work. Peace means to be in the midst of all those things and still be calm in your heart. That is the real meaning of peace.'

And then she talked about how we can obtain peace in our hearts--through the atonement--even though life is never quite peaceful.

After church we came home so we could do our Easter Egg Smackdown before lunch. Here are some of our candidates...

Rachel competed with Angelica and Eliza (the Schuyler sisters): 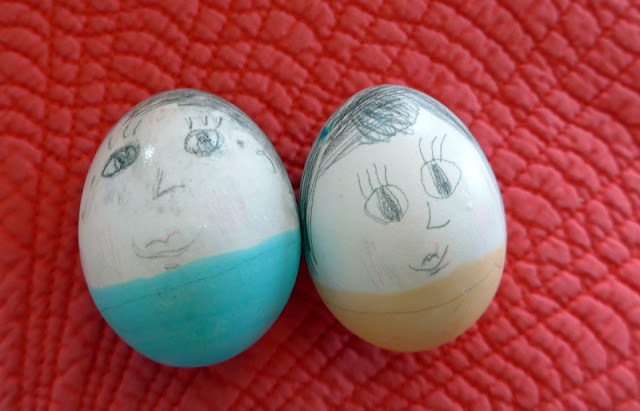 And here's Alexander Hamilton, who totally threw away his shot and didn't compete: 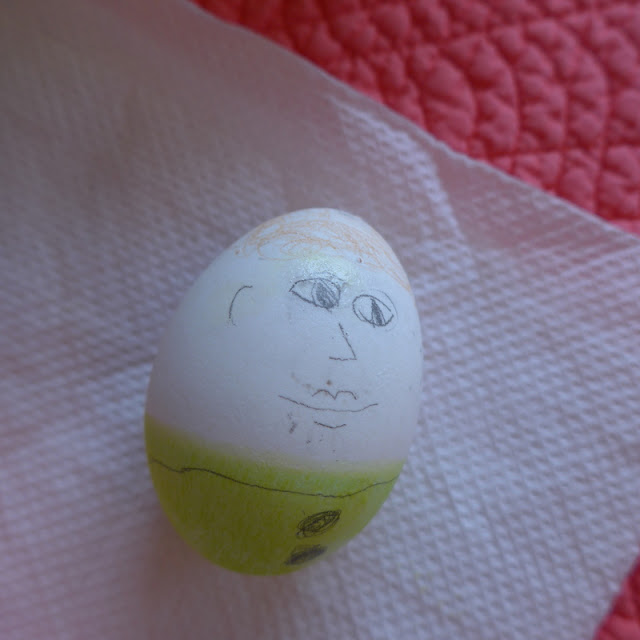 It's about time those Hamilton boys learned that dueling is a bad idea. Sheesh. I finally finished listening to Hamilton (the musical) all the way through yesterday and almost cried. It's like a real life Greek tragedy.

Miriam competed with Berry Terrific and Tough As A Sword: 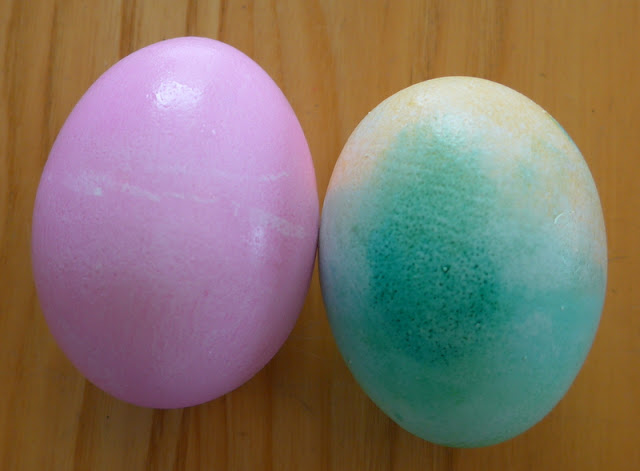 She wanted to pick a real tough sounding name to give her egg an edge. And what's tougher than Tough As A Sword? Probably nothing. I thought I got a picture of her other one--Half and Half--but I guess I didn't.

Here are my two, Blue Bird and Hattaras: 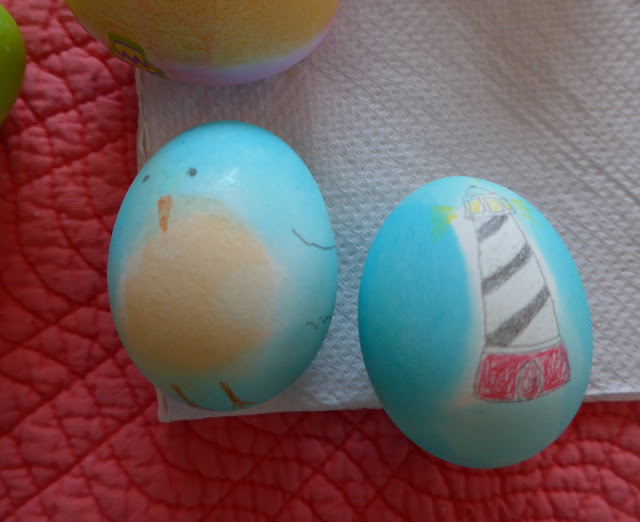 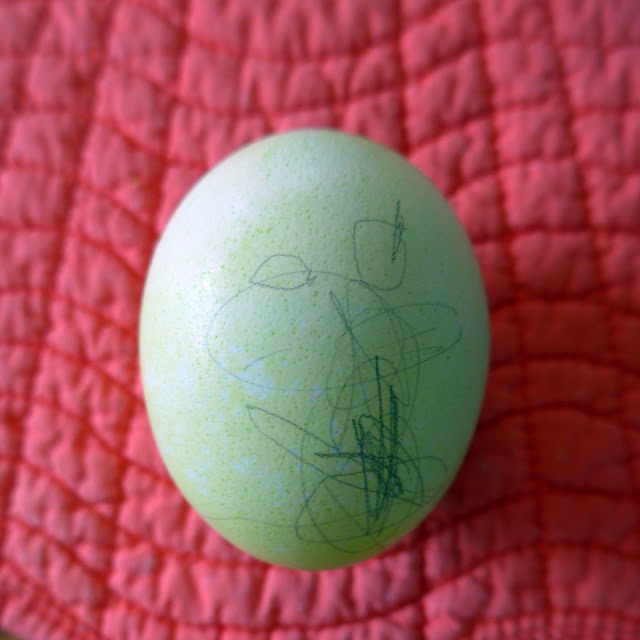 And here's a shark that he commissioned me to make for him--which he named Princess Leia: 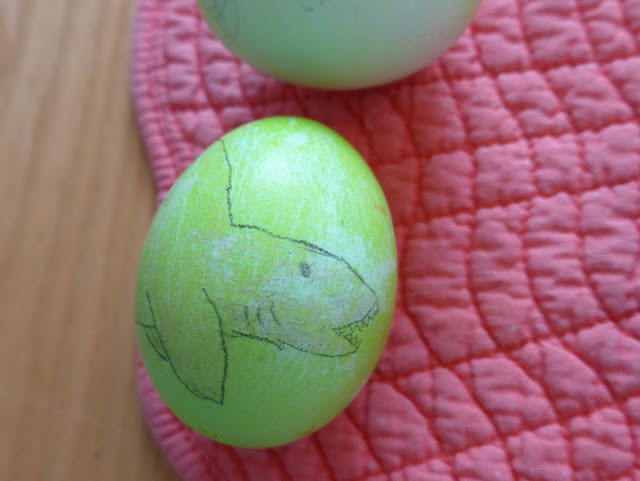 Grandpa doesn't like hard boiled eggs (can't stand the smell or the taste or anything) so he let the kids decorate his for him. He selected a chicken that Rachel made and called it Duke and an egg that I think Benjamin made, which he called UNC. Grandpa's got March Madness fever. 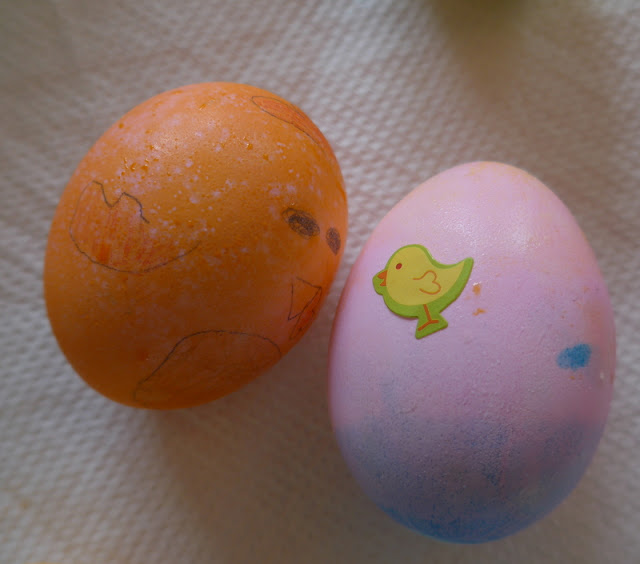 Daddy didn't decorated any eggs this year either (the kids thought this was awesome--more eggs for them). He chose this snail, which he called Speedy: 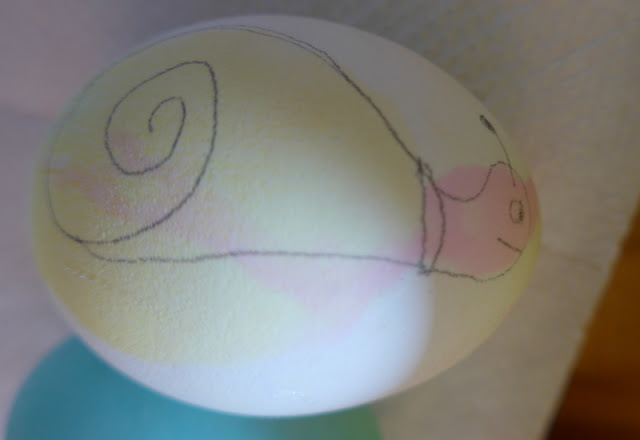 His second egg had little fishes drawn on it and he called it "Something Smells."

With our eggs claimed and named we were ready to compete. Here's Grandma and Grandpa going head to head: 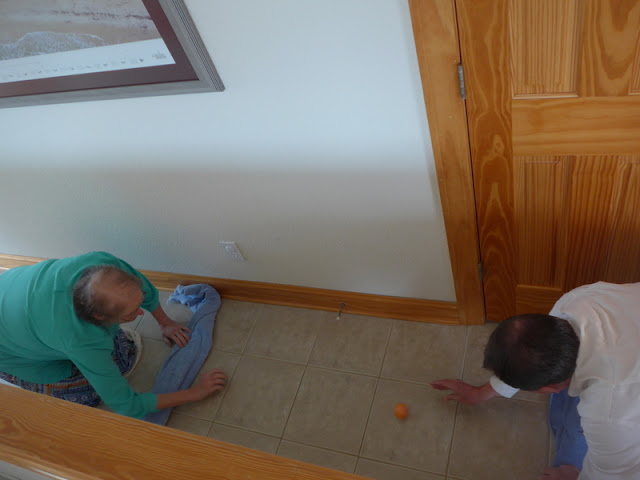 Poor Grandma lost both her eggs at the very beginning of the smackdown so she was dubbed the official baby holder.

The best carnage from this year occurred when Angelica (Rache) and Hattaras (me) smashed into each other. Angelica smashed Hattaras to smithereens, but a piece of Hattaras's shell lodged into Angelica's head. We've never seen the likes of that before! Later, as it turned out, Angelica--with her new dorsal fin--would be pitted against Princess Leia Shark: 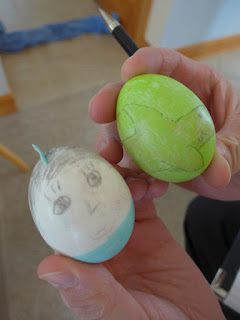 Here are some shots of everyone in battle: 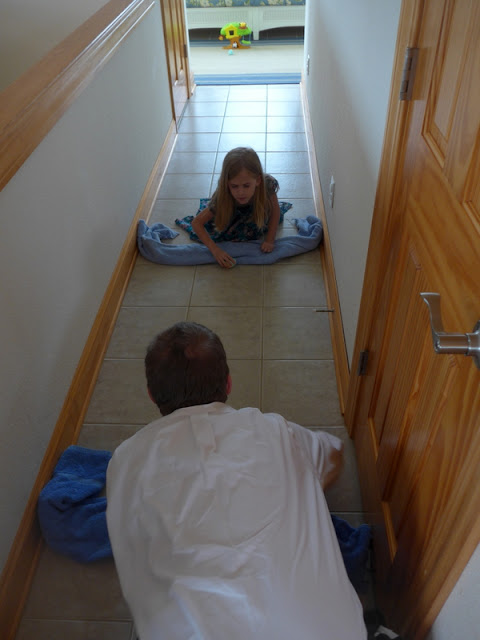 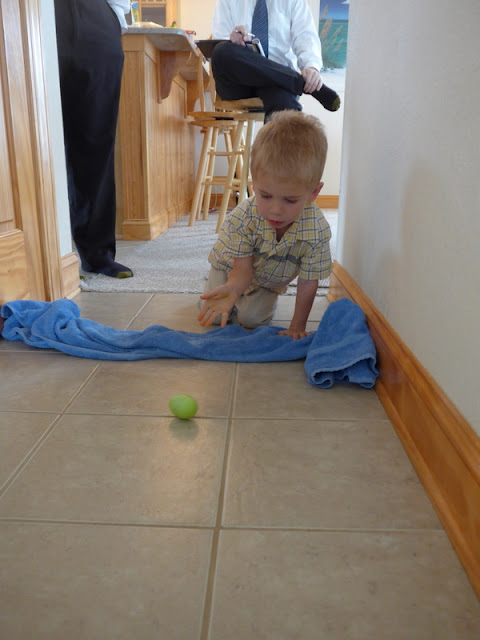 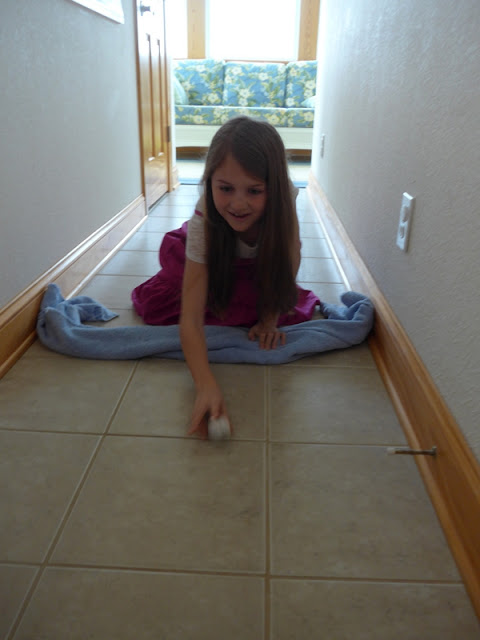 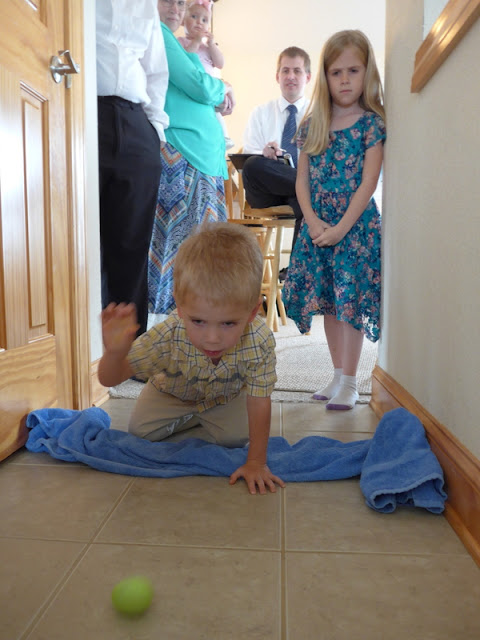 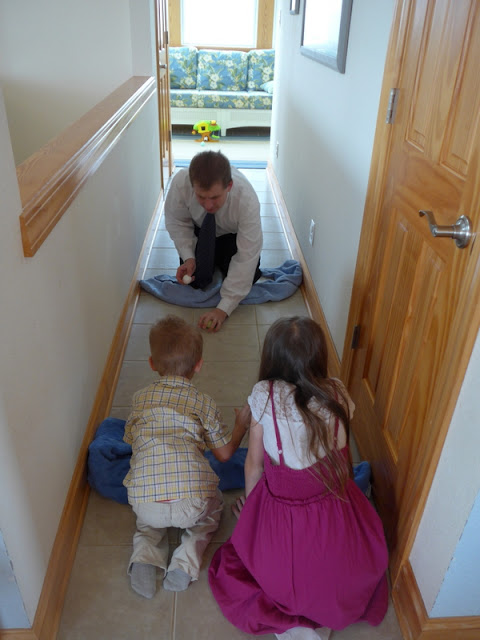 In the end Tough As A Sword triumphed, much to Miriam's delight! 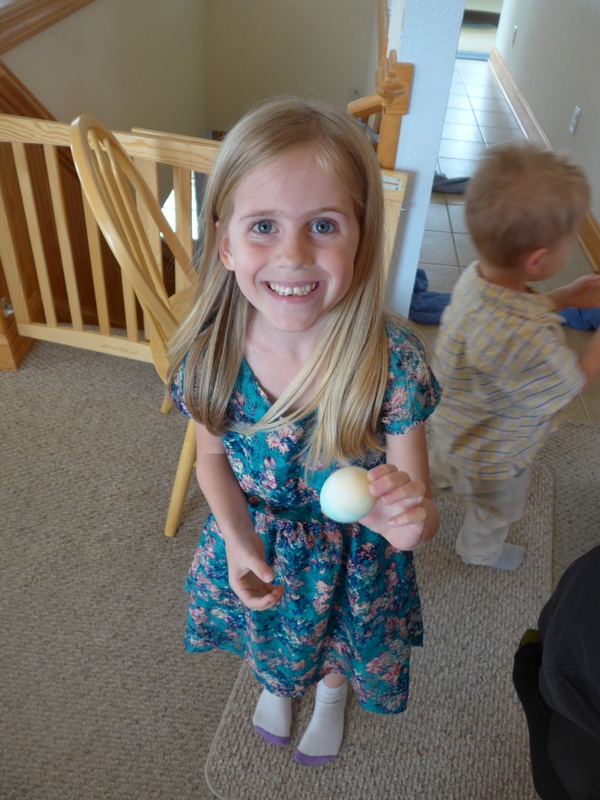 Here's this year's bracket, for your reference: 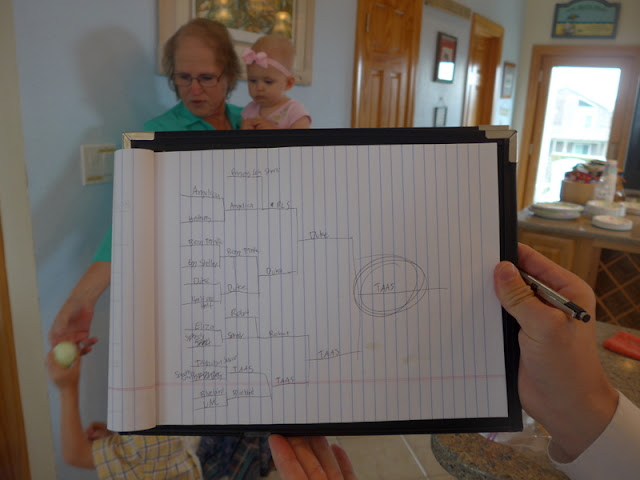 Benjamin's already looking forward to next year (he cried when he realized he lost because he "wanted to winned!"). It wasn't the first time we've had tears and it probably won't be the last...but it wouldn't be a wholesome family activity without a few tears, right?
Posted by Nancy at 11:13 PM