Peek-a-boo and throw up

We had a fool-proof plan for rehearsal on Saturday. I've mostly been taking Zoë with me, which is fine when we're just singing but not-so-fine when I'm supposed to be dancing. She's clingy so I end up dancing with her because she's entered that lovely stranger-danger age and no one but Mommy (and sometimes Daddy or Rachel or my friend Laura (for whatever reason Zoë adores Laura)) will do. That makes dancing hard.

So we decided that I will take Benjamin to rehearsal because he'll happily play in the nursery, and Zoë would be Daddy's shopping buddy. See? Fool-proof.

But then Benjamin started throwing up on Friday night so Andrew stayed home with him and I took Zoë to rehearsal again.

Andrew stayed home with Benjamin yesterday and I took the girls to church. We even stayed for choir, but on the way home Miriam announced that she wasn't feeling well. She made it home and managed to slip into her pyjamas before she started throwing up. 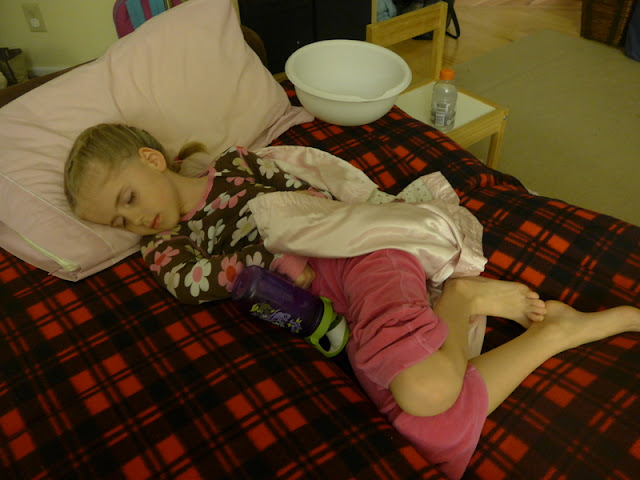 Miriam slept out on the couch last night. She got to stay up late and watch movies while she threw up every half hour. Eventually her tummy calmed down and she was able to fall asleep in spite of Zoë, who kept us up until 2 am.

She's busy working on teeth 7 and 8. I nursed her for hours (while watching Murdock Mysteries) but she wouldn't (or couldn't) fall asleep. When I could take it no longer (three hours of non-stop nursing) I offered her an ice cube wrapped in a cloth, which she gladly accepted. 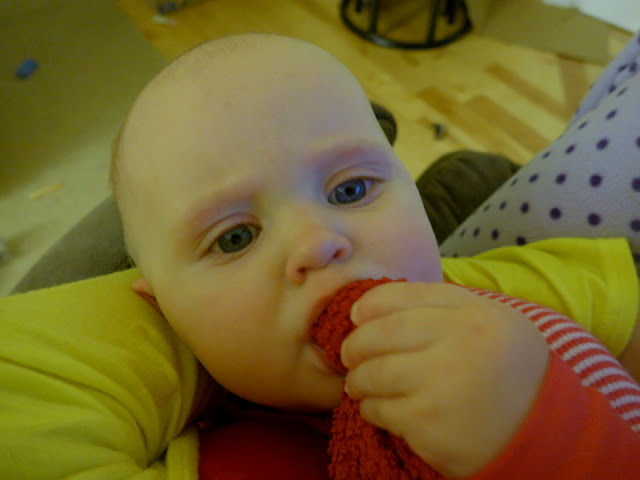 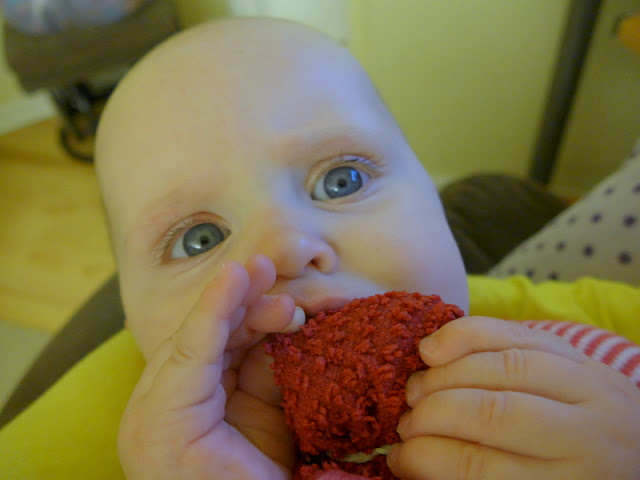 When she finished her ice cube she started a game of peek-a-boo with the wash cloth. I've tried teaching her how to play a few times but she never really caught on. And then last night out of the blue she decided it was time to peek-a-boo.

Videos are never as good as the real thing (because the camera is so distracting) but here she is:

We video-called Auntie Josie and talked with her until midnight, nursed and watched more Murdock Mysteries, and screamed a lot...until 1:30 when Miriam woke up and requested another show (we told her no) and threw up, I think, and Benjamin got up to go to the bathroom, and Rachel angrily grumped in her bed because everyone was being so loud. It was a complete party.

I'm hoping this will end up being good timing. I might just be over this sickness—and hit my 24-hour vomit-free mark—in time for rehearsal tomorrow night. I was hoping to not catch it at all, but I guess Sunday and Monday are okay days to be sick because we don't ever rehearse those days.

Zoë, who feels like she weighs 70 lbs today (I'm so weak), has finally fallen back asleep and I have the other two plugged into the television, so I'm going to see if I can nap for a while...
Posted by Nancy at 11:21 AM

Email ThisBlogThis!Share to TwitterShare to FacebookShare to Pinterest
Labels: sickness and health, Zoë