Dinner didn't manage to satiate Benjamin's little tummy today. Although he ate plenty he was begging for more food before we'd even cleared the table.

"We're not having dessert tonight," I said.

"But I promise I want dessert," he said.

And I totally don't doubt that, but it didn't change the fact that there was nothing for dessert.

Miriam finished reading Harry Potter 5 this week and was super excited to get to watch the movie. She and Rachel were going to stay up together and watch it after Benjamin went down for bed (because obviously that movie is too scary for a three-year-old, right?), but after stories he didn't really want to get into bed.

"I'm so, so hungry!" he told me, rolling around on the floor. "My tummy is saying it wants more and more food!"

"I think your tummy is saying it's ready for bed," I said, walking him back to his bed. I started singing  a lullaby to him, patting his tummy to the beat of the song since he doesn't like bedtime tickles like the girls do (they both want back rubs every night; Benjamin loathes back rubs).

"Don't do that, Mommy," he said, pushing my hands away. "My tummy says to stop that."


He's pretty picky about touching (touching is fine but everything has to be on his terms (meaning he has no problem touching other people beyond their limits but expects his boundaries to be observed (which is probably normal for a three-year-old))) so I stopped, finished my song, and helped him say his prayers. Then I settled down on the couch with all my girls to watch Harry Potter.

Benjamin fell asleep pretty quickly but about halfway through the movie I started seeing shadows drifting around in his room, hinting to me that he was up and about in there. I got up to check on him and found him sitting in his bed, covered from head to toe in vomit.

His tummy was telling him something, alright, but Benjamin was not picking up what it was putting down. Dessert was certainly not what his tummy had in mind (though the part about not wanting to be patted was probably accurate).

I did the only logical thing I could think of and ran to get Andrew, who was hiding away in our bedroom to work. Andrew cleaned Benjamin up and then held him for the rest of the movie, while Benjamin busily threw up every fifteen minutes (a sneaky way to watch the movie we told him he couldn't watch—and he jumped in at the scariest part, too).

I was busy holding Zoë, for the record. She was fussy and clingy. But I'll take that over vomit any day of the week.

I was sitting here, wondering how on earth Benjamin contracted whatever it is that's plaguing him, and I thought to myself, "We didn't even do anything this week!"

But then I remembered yesterday. Yesterday was a pretty busy day.

We left in the morning, aiming to have lunch with Miriam at school, but we arrived at school just as her class was leaving the lunch room. They eat "lunch" at 10:30, which, in my defence, is a ridiculous time to be having lunch. Instead of eating lunch with her we went to her classroom for an hour and then had lunch with Rachel. At noon. When we were actually hungry for lunch.

On the way "home" I took Benjamin to the museum. He'd been so wild this week that I was fine not being shut up at home with him another day. And it had been a while since we had an outing. It was a little chillier outside than we had dressed for so we played at the indoor exhibits.

Zoë is getting old enough to enjoy the museum as well, which is fun! I didn't get a picture of their two little noses pressed up against glass of the king snake terrarium, but I did get a few pictures here: 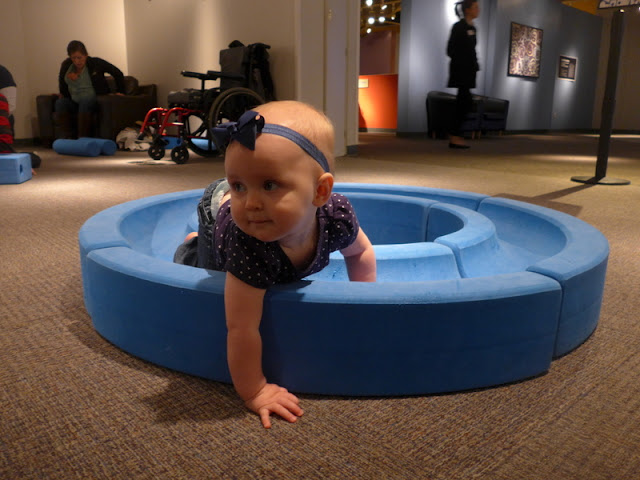 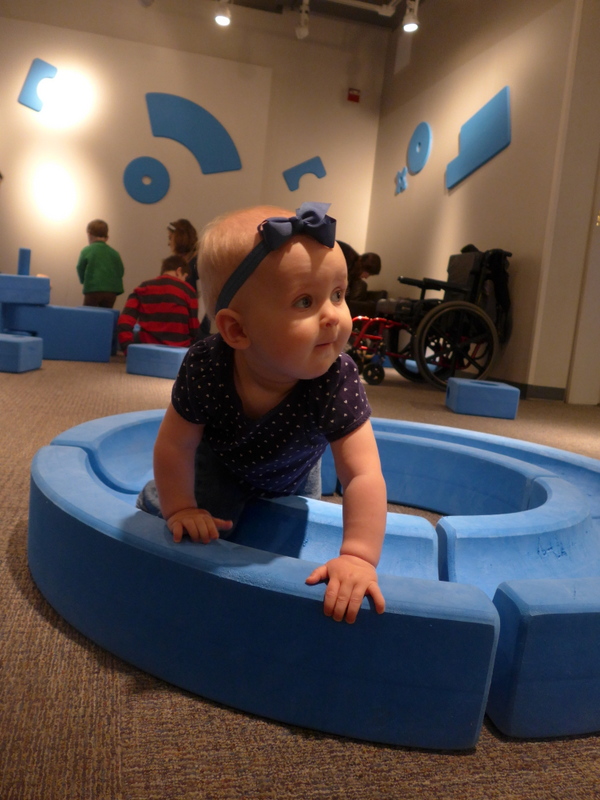 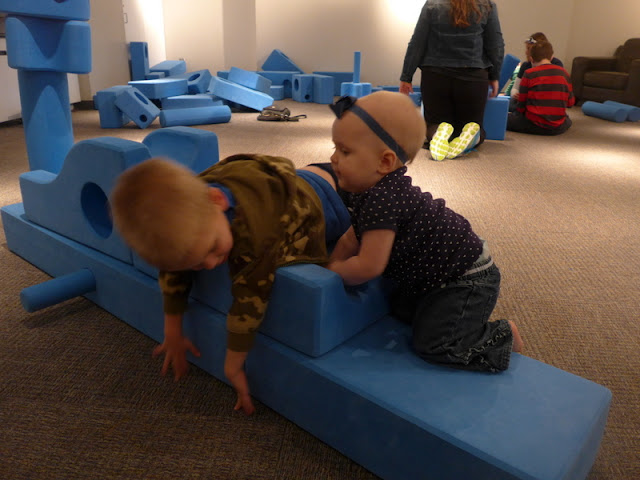 See what I mean about Benjamin not respecting others' space? When I called him on the carpet for rolling over his sister he said, "But she was touching my tower." So obviously his attack was justified. 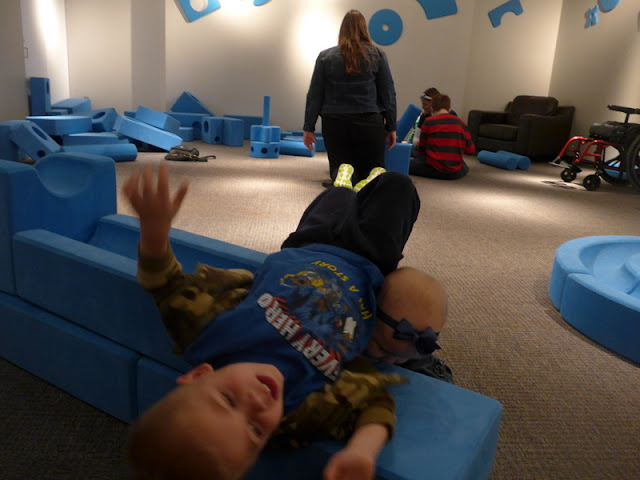 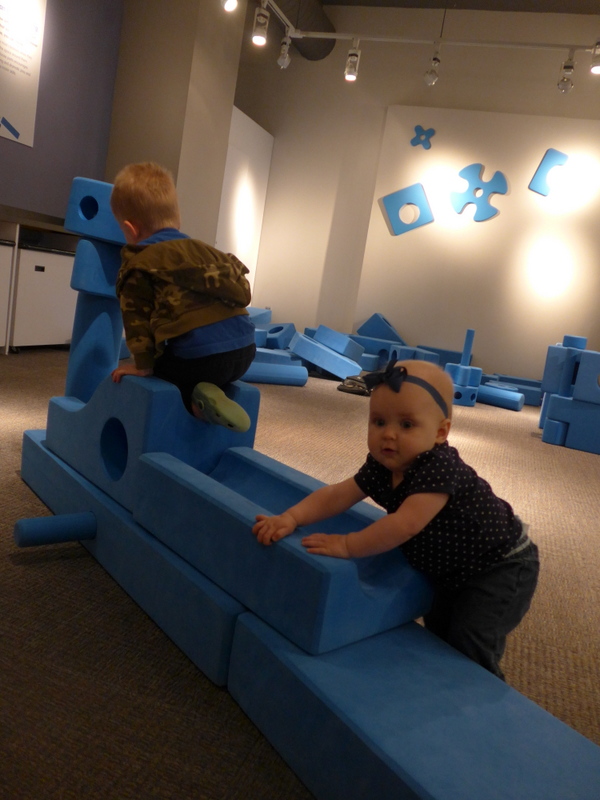 Her continued attacks on his tower prompted him to suggest a visit to the baby playground, so that's where we went next: 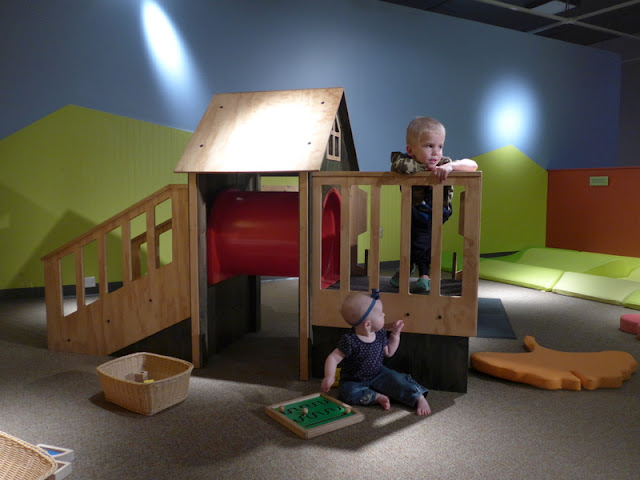 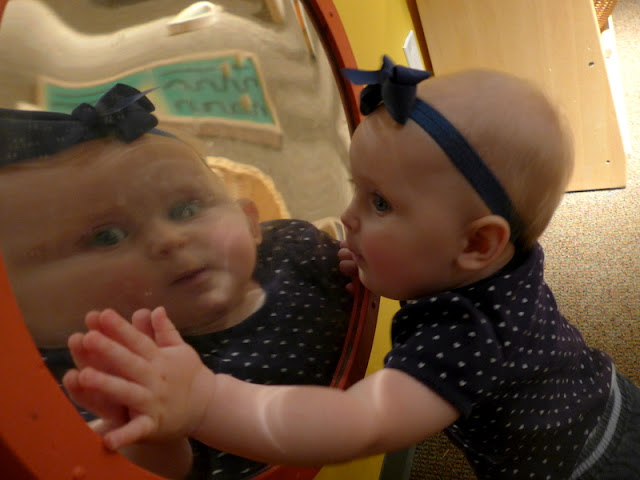 My point in bringing up our visit to the school and the museum is that I suddenly realized that Benjamin was exposed to hundreds of children and a plethora of germy surfaces. Who knows where he picked this thing up? Let's just hope that it's short-lived and that no one else catches it.

We'll be hand washing like crazy over here. Constant vigilance!
Posted by Nancy at 12:37 AM