My friend Jill also supervised Rachel's field trip a couple of weeks ago and when we were talking about spring break I mentioned that we'd be heading to the Outer Banks so she said we just had to visit Jockey's Ridge State Park. I told her we'd try and then mentioned it to Karen while she was making her list of things to do out here.

Anyway, I'm so glad Jill told me about Jockey's Ridge because it was a ton of fun. Basically it's just a sand dune--but it's ginormous! And frankly, the weather's perfect for it right now because it's not scorching hot. 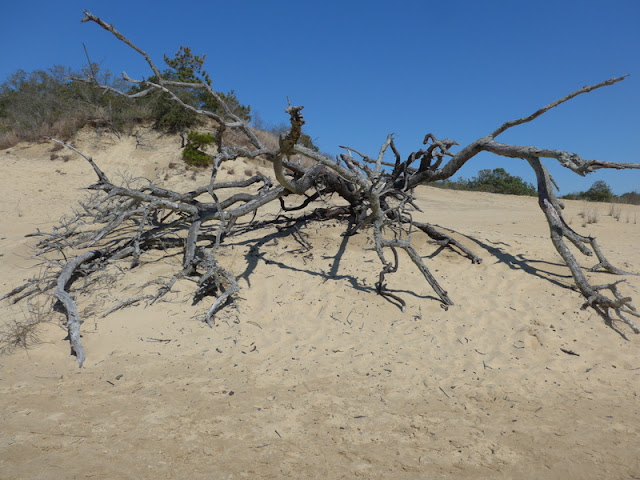 We were a little unprepared for just how huge the dune was. I kept racing ahead with the kids to what seemed to be the top of the dune and then would shout back at Andrew, "It keeps going!" 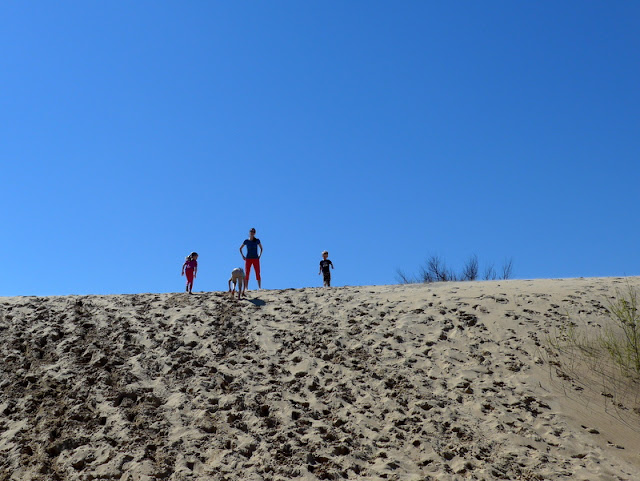 Eventually it had to stop because the dune is on a relatively narrow island. From the very top you can see the sound on one side and the ocean on the other. Here's me turning a cartwheel while Benjamin and Miriam are racing to the top: 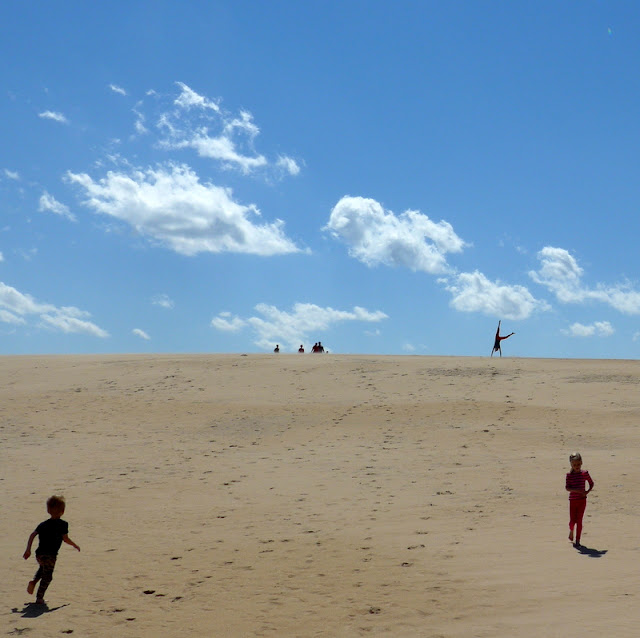 And here I am with those three at the top of one of the dunes: 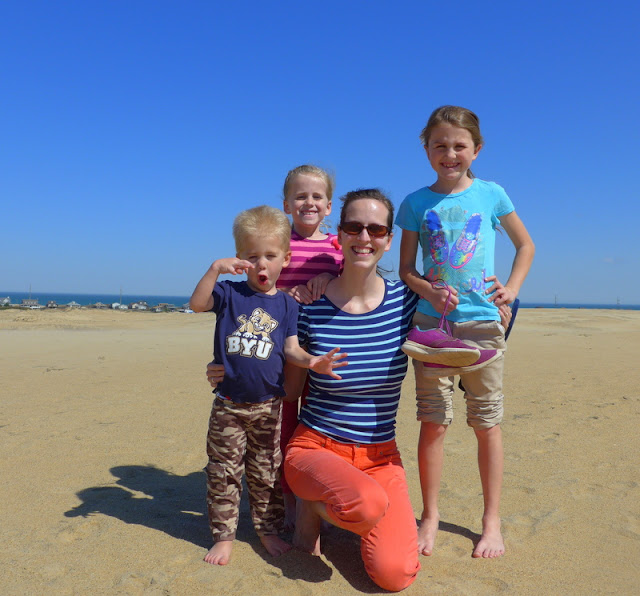 ‎Zoë stayed behind at the visitors center with Grandpa, so she's not in any pictures. And there's probably far too many pictures of us playing on the dunes...but here we go anyway...

It was pretty windy (that's par for the course out here) and there was a constant cloud of sand swirling around our ankles. "It pays to be tall," Andrew remarked. We were able to keep the sand out of our faces, for the most part, but when things got gusty poor little Benjamin had a rough time. 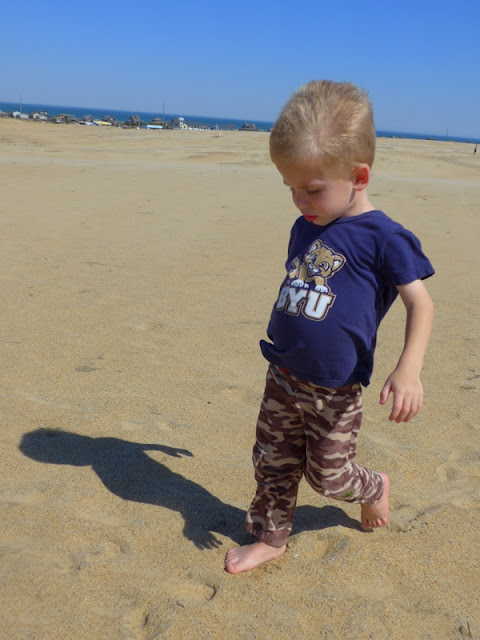 Since we'd just finished up at the Wright Brothers' Memorial there was a lot of pretending to be airplanes going on. 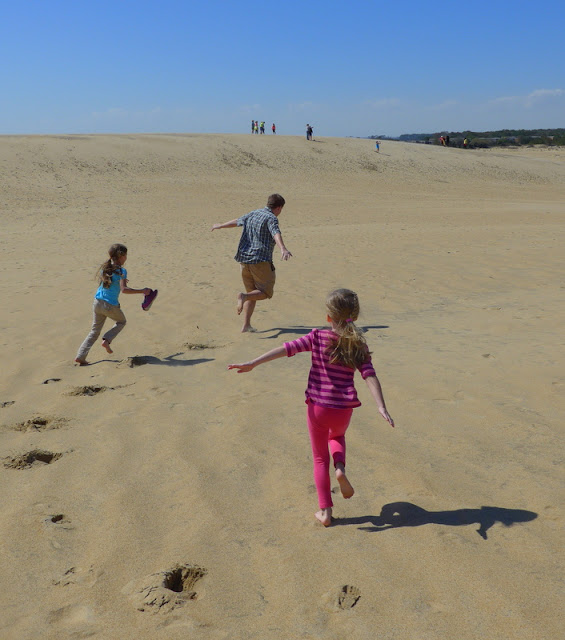 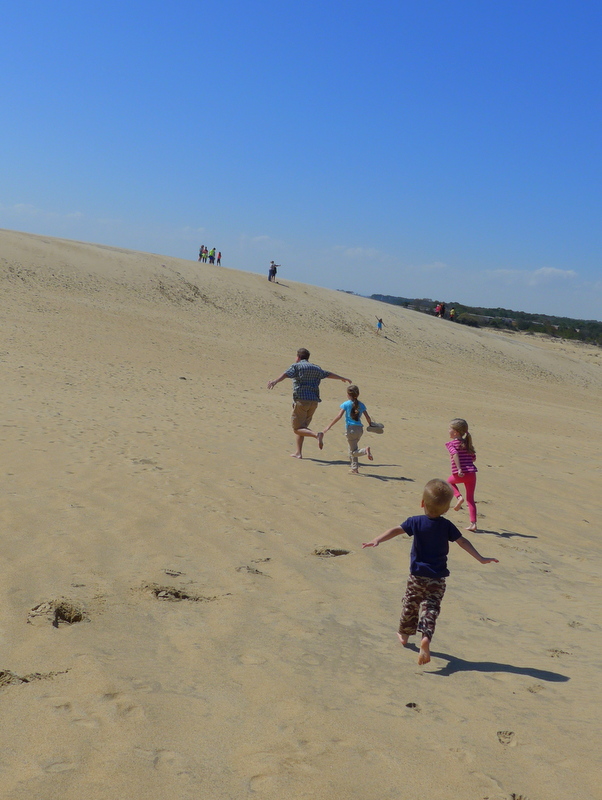 Here's Miriam rolling down the hill toward Grandma: 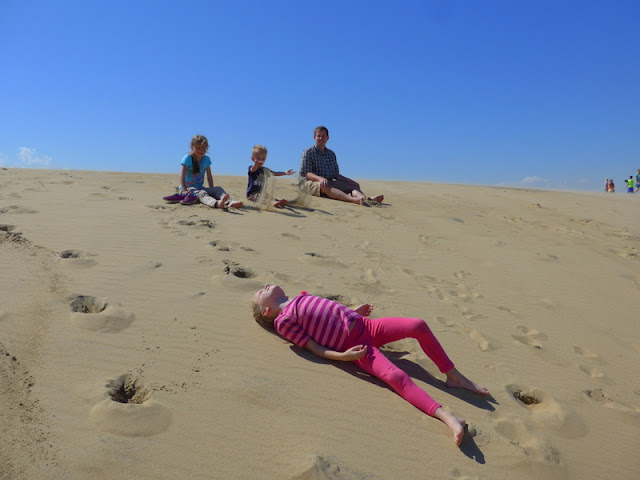 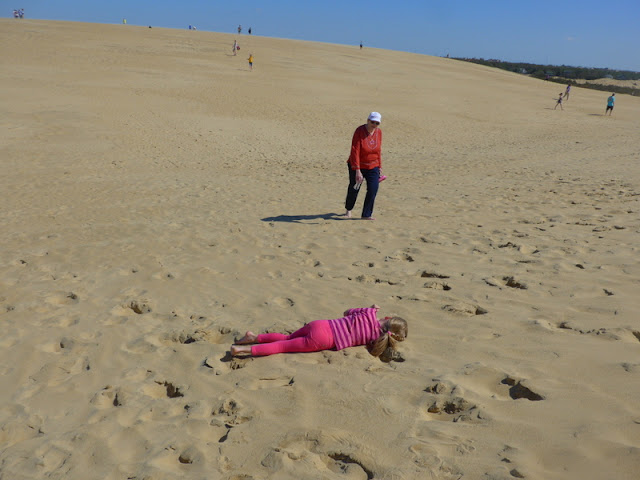 The kids were so sandy by the time we left!

When we were on top of the tallest dune, Andrew lined the kids up and said, "Let's race to the bottom! On your mark, get set, go!" He and the girls headed down one side of the dune... 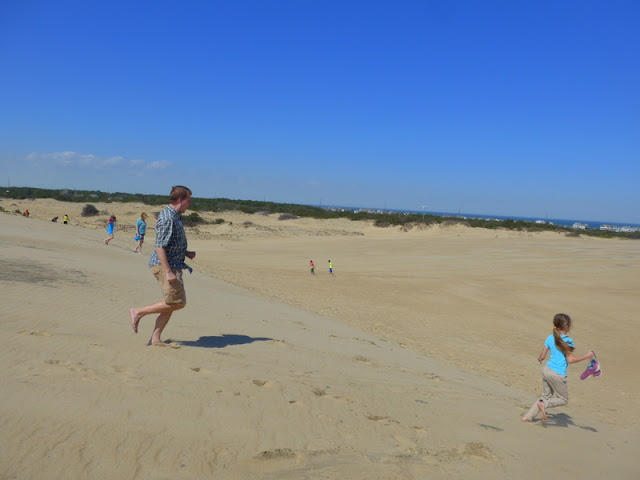 And Benjamin took off in the complete opposite direction: 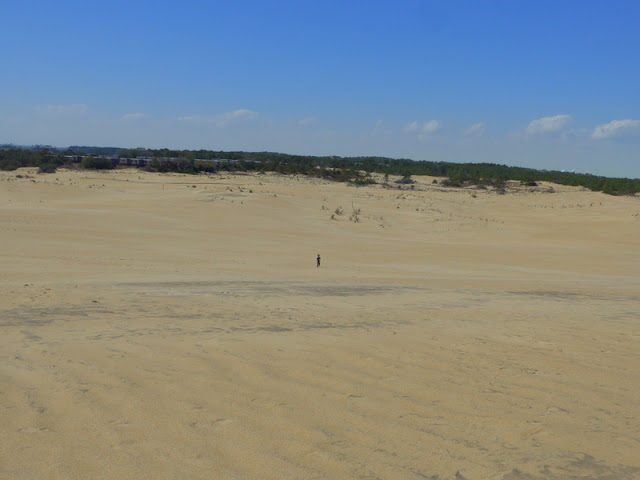 He ran all the way to the bottom before he turned around to see that no one was with him. But at least he was able to win his own little race!

Here we are racing down the hill to join Andrew (after collecting Benjamin): 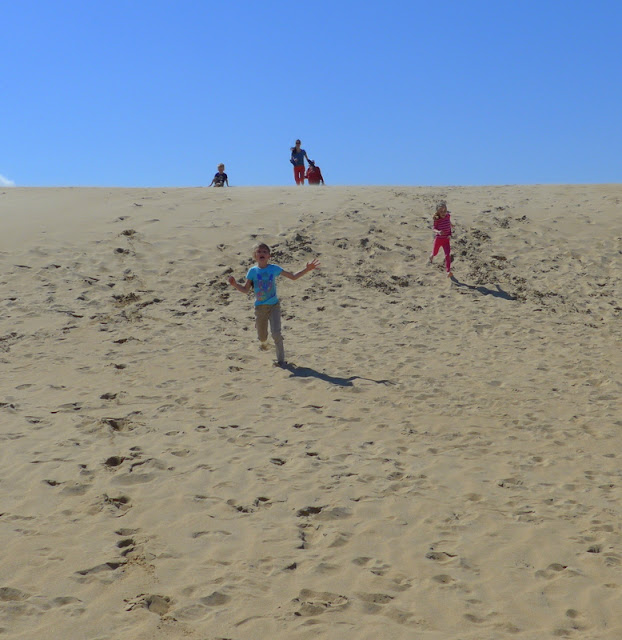 And here I am being a sand monster and chasing the girls: 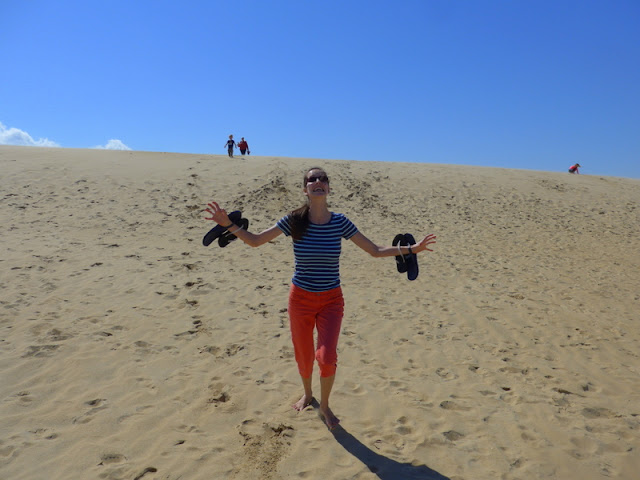 And here are the kids coming down a dune with Grandma: 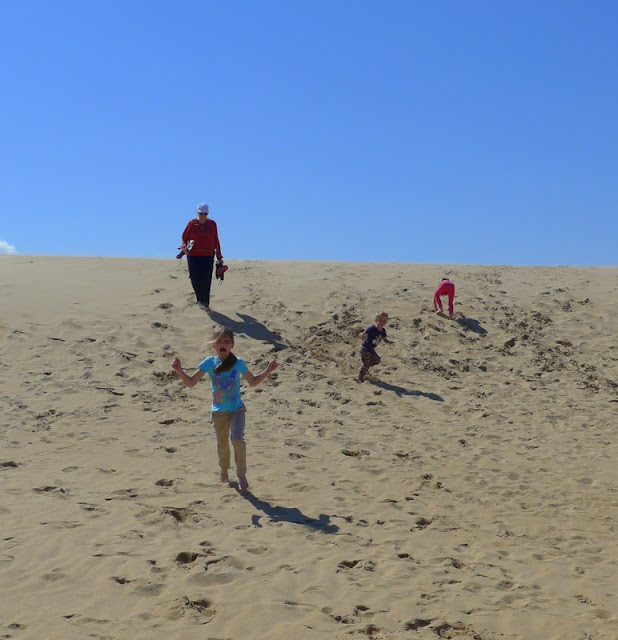 This picture kind of shows the little layer of sand that was swirling around our feet: 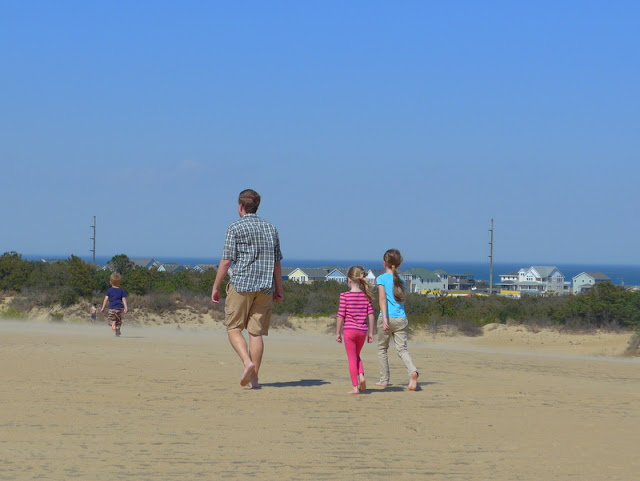 We spent a long time jumping down the last dune before the exit of the park: 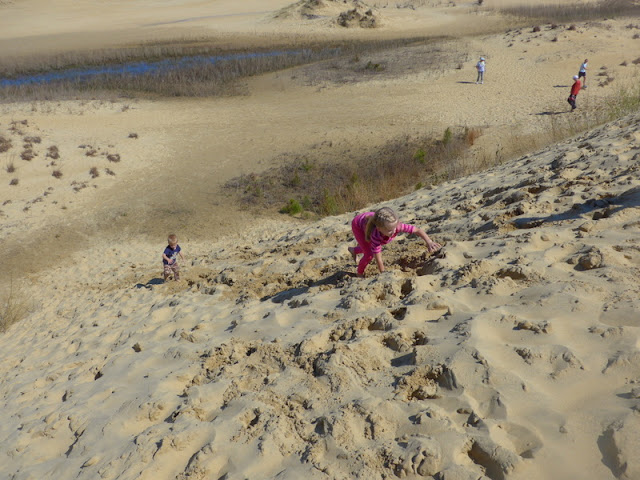 It's a popular place to go hang gliding and I looked into lessons but it was way out of our budget, but it was fun to watch others try it up close. You can see some hang gliding lessons happening in the background of this picture: 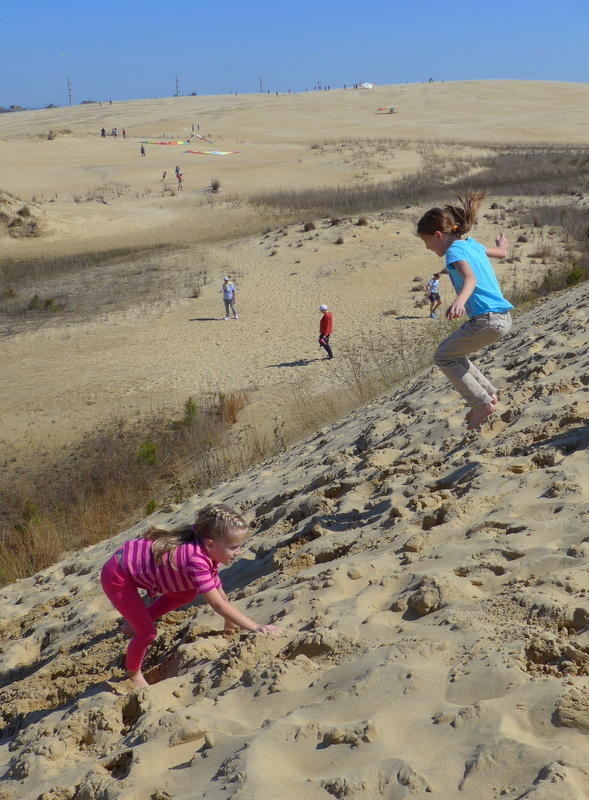 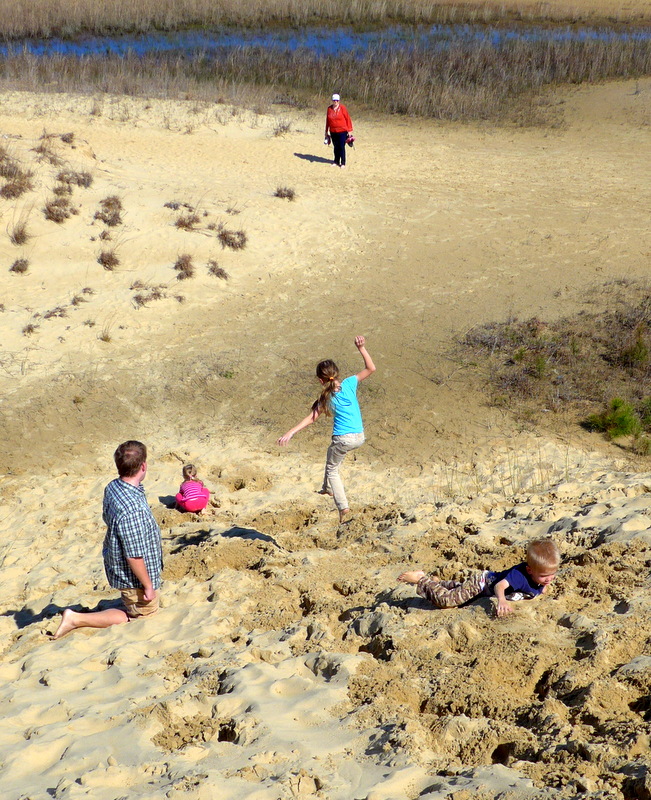 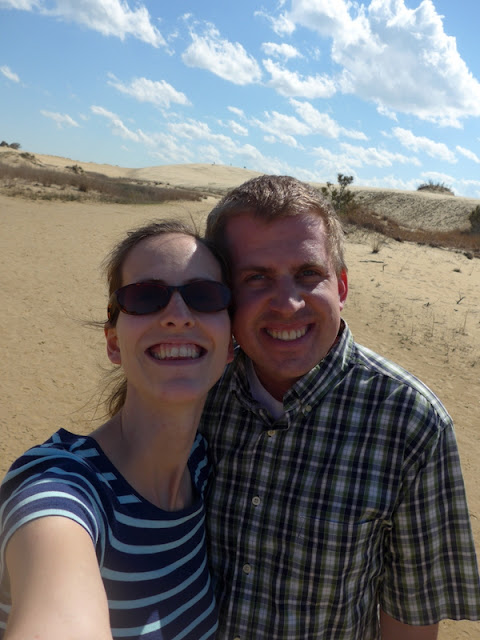 And then we were all exhausted and ready to go home. Of all days this was the day we forgot to pack hats, water, and sunscreen! The day we visited Roanoke, The Wright Brothers, and Jockey's Ridge!

And thank goodness for baby-carrying helpers!

Here's ‎Zoë looking over Rachel's shoulder (Rachel is one of my best baby helpers): 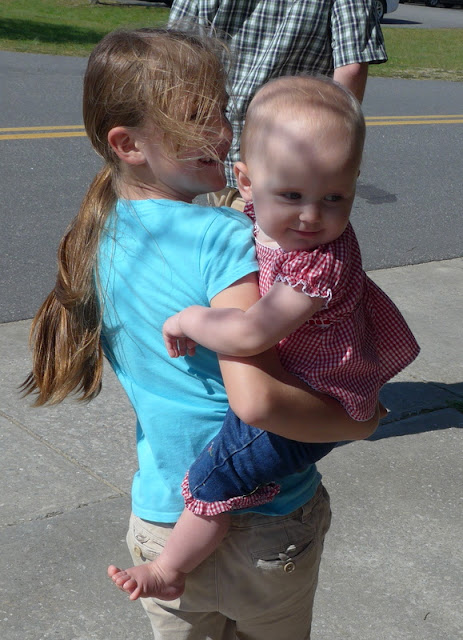 Here are Andrew, Benjamin, and Miriam pretending to hang glide: 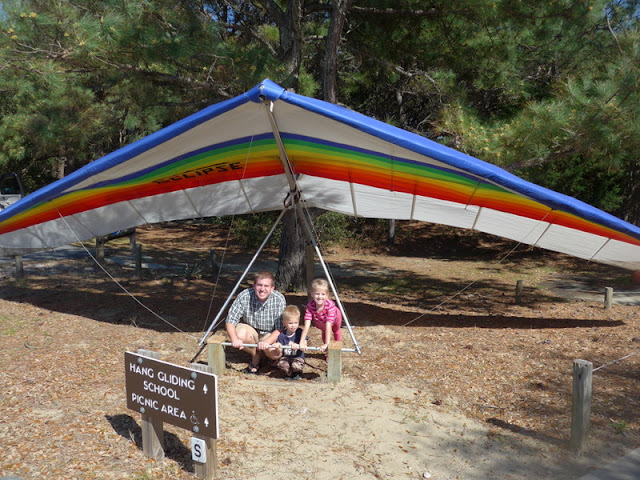 Rachel didn't take a turn on the hang glider because she was so happy that ‎Zoë was happy being held by her! Rachel enjoys holding ‎Zoë more than ‎Zoë enjoys being held by her, so when ‎Zoë's in the mood for Rachel time, Rachel drinks it up. 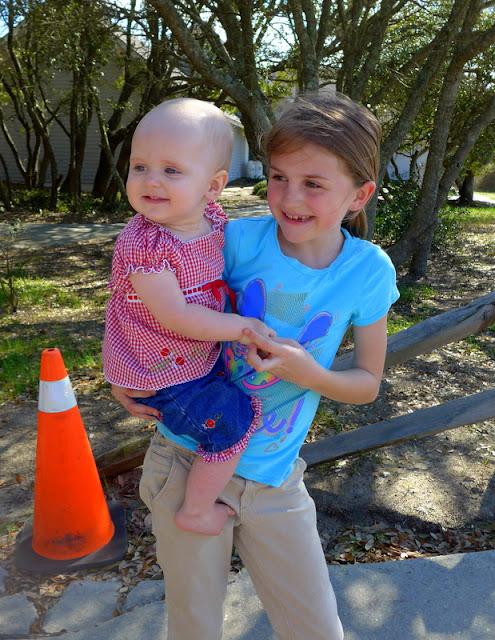 Also, ‎Zoë said, "Rah! Rah!" when she reached out to Rachel, so Rachel's pretty sure she was trying to say Rachel. It's possible. This little lady babbles all the time. She often says Mama and Dada. I believe that I've heard her say "Hi!" to people when she waves at them. I also believe she has screamed "No!" to me a few times (always while strapping her into her car seat, which is not her favourite place to be). So if she's really saying all those things (which, I'm not completely convinced is the case...but...it might well be), why not say "Rachel" as well?

Our favourite thing right now is when she hyperventilates when she wants something (usually if anyone is eating or drinking anything around her). She's cute. And she sure was happy to meet up with us after we got back from the dunes (though I'm sure she was also happy to spend some one-on-one time with Grandpa while we were gone).
Posted by Nancy at 12:23 AM