Our goal was to leave the house by 11:00 on Friday morning. We left at 11:07, so not bad in our book, but we had to pull off at a gas station half an hour into our drive. Half the kids--Miriam and Benjamin--rode with Grandma and Grandpa in the rental car. Andrew and I took Rachel and Zoë so that the oldest could help take care of the youngest in the backseat. This was mostly accomplished by looking up from her kindle every now and again to throw a toy or some food in her direction, but ultimately proved most useful when Rachel yelled, "Oh, no!!!"

"What?" I asked, whipping around in my seat as Andrew reflexively stepped on the breaks.

"Just,"Rachel said, a bit calmer now, "Zoë has yellow stuff all over her legs for some reason. She's smearing it all around. I'm not sure how it got there but..."

"Lovely," I sighed, craning my neck to investigate. "That's poop."

Clean up was fun and soon we were on the road again (and without further mishap, though we did have to stop again to nurse a screaming baby). For the most part I ignored the quickly passing scenery, engrossed in the book Into Thin Air. I had to get down from Everest before I could focus on anything else, though I did look up when Andrew slowed the car down for a long line of other cars rubber-necking at an alligator on the side of the road (it was humongous) and to shudder a time or two while driving over miles and miles of bridge spanning the open ocean (or sound or whatever (so many miles of bridge)).

The kids were all too happy to pile out of the vehicles when we arrived at the beach house and while Daddy and Grandma went to the store to purchase provisions, Grandpa and I took the kids to the beach. It was a beautiful day, though a little chilly and terribly, terribly windy. But I suppose that's to be expected around these parts--because that's the reason the Wright Brothers chose this area to try out their flight machine for the first time. The wind never lets up.

Lethbridge ain't got nothing on the Outer Banks!

The wind whipped the sand painfully against our bare legs, and the ocean is still icy cold from the winter currents, but we endured a happy hour or so at the beach, skipping in the waves and playing in the sand. We did not attempt boogie boarding because the minute we stepped over the dune our boogie boards lifted in the air like kites. Rachel accidentally let go of her strap and had to chase her board down the beach quite a ways before she caught up with it (so Grandpa walked them back to the house for us).

And not that this has anything to do with our first day at the beach, but overnight one of Benjamin's brand-new crocs blew away. We eventually found it (far, far away from where it was left) but it took quite a long time with several of us looking.

Anyway, here's a picture of Zoë enjoying the beach: 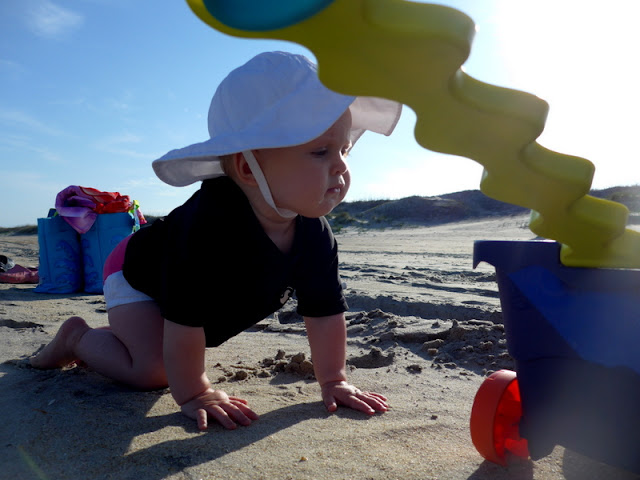 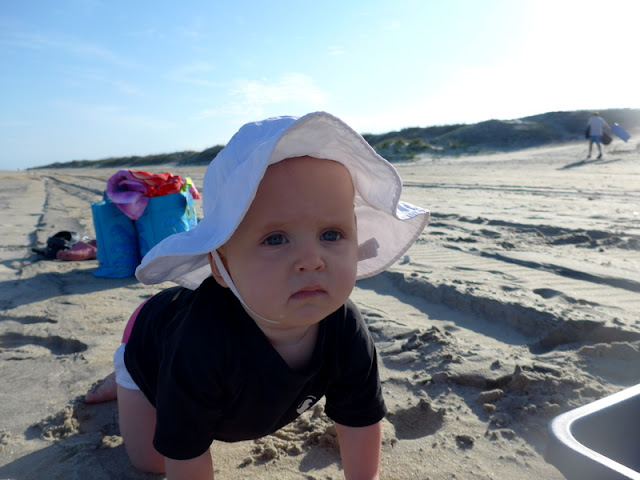 And here's Rachel and Miriam running off to test the water: 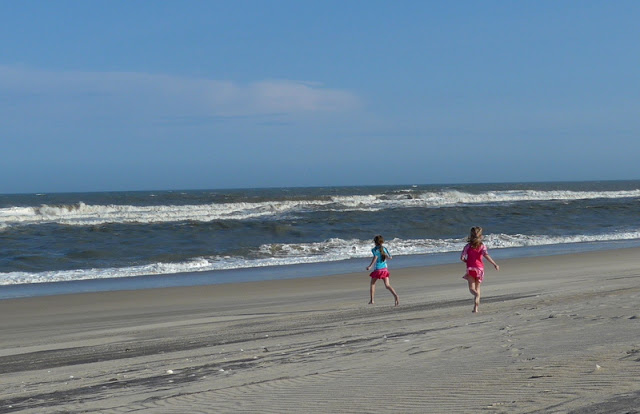 And here's Zoë and Benjamin playing in the sand: 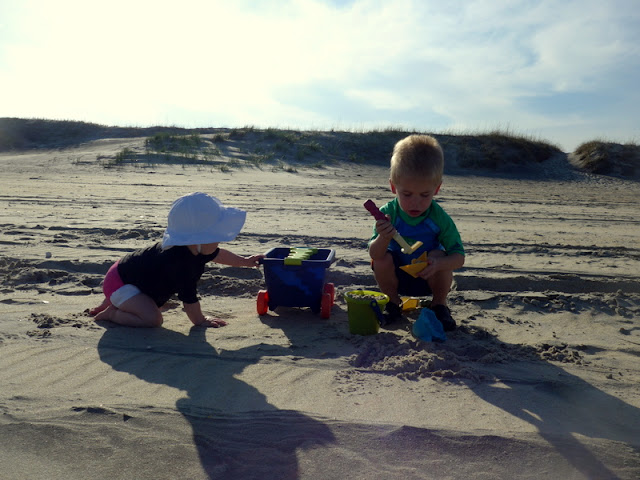 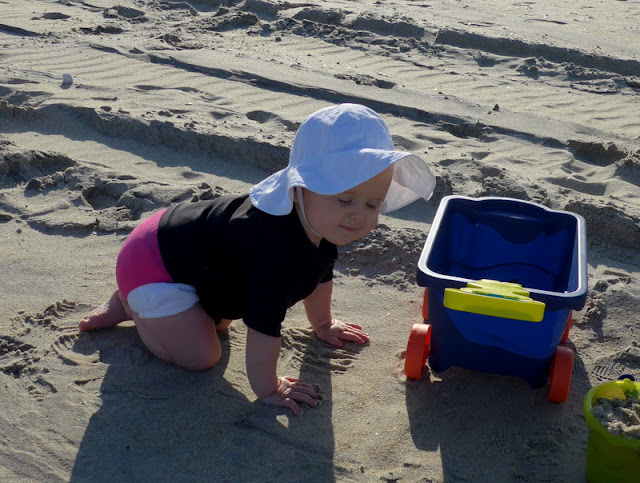 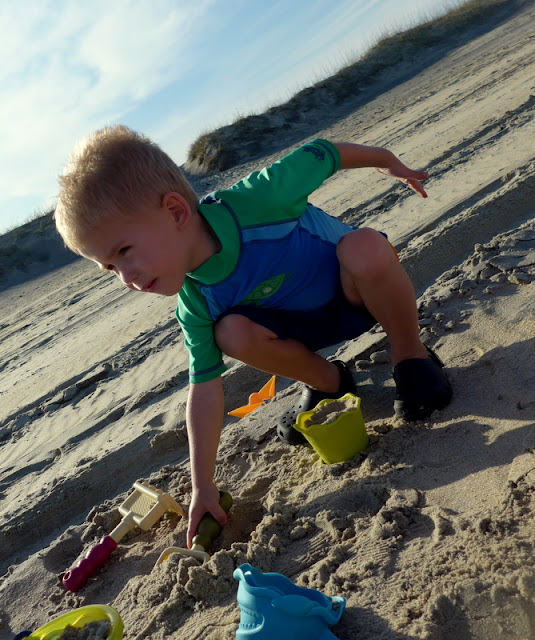 And here's Miriam trying to get warm in the sand: 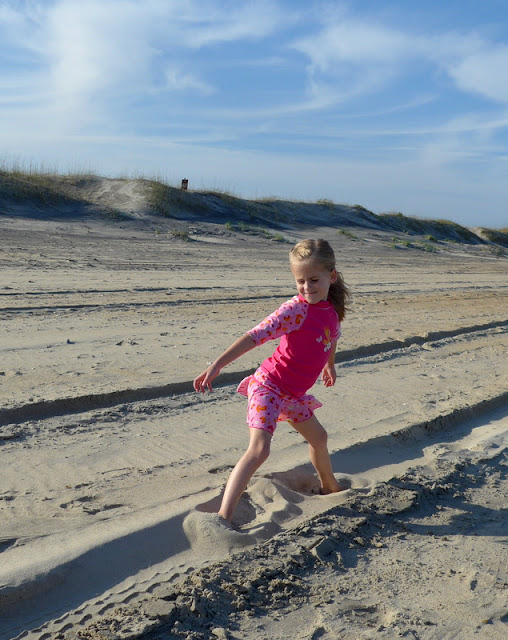 And Benjamin playing with Rachel now: 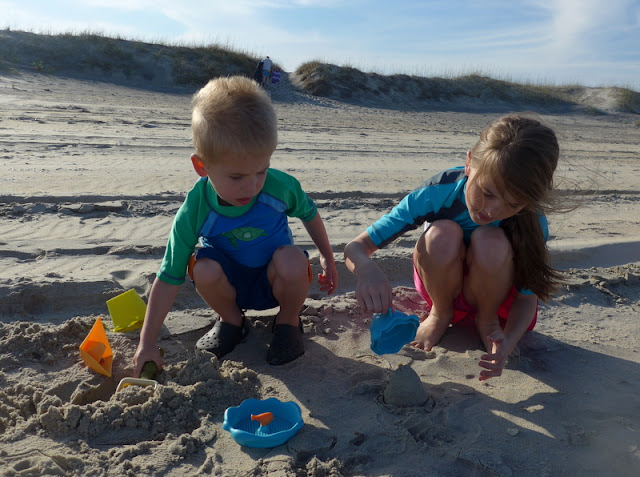 Once Grandpa was back the girls were much more excited about playing in the (frigid) water: 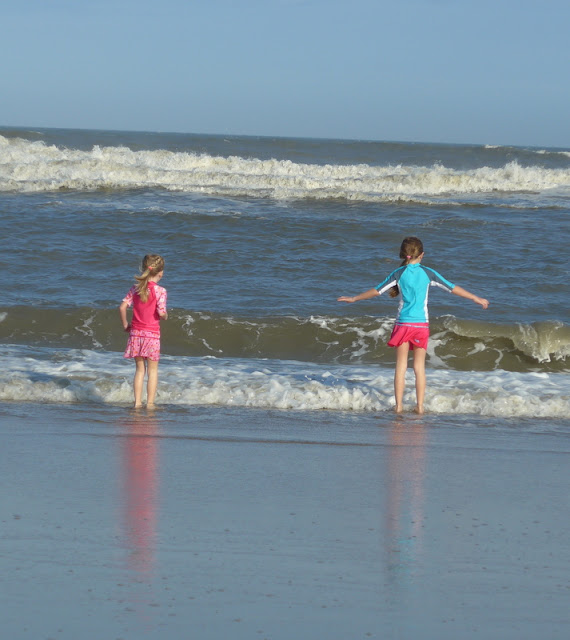 Benjamin tried the water as well, but he was not convinced that jumping in the waves was a good idea. 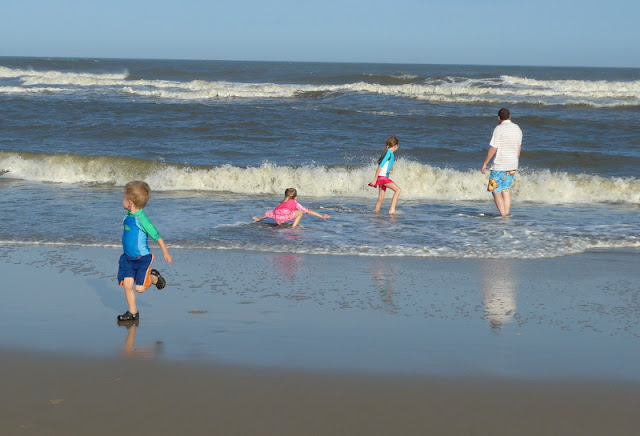 He was more a fan of hunting along the shore for shells: 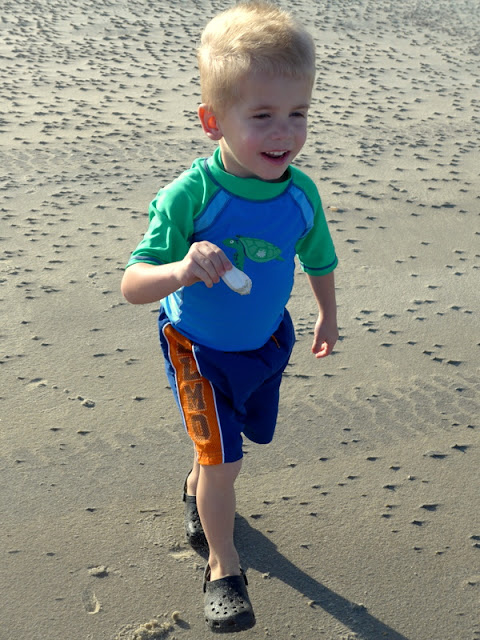 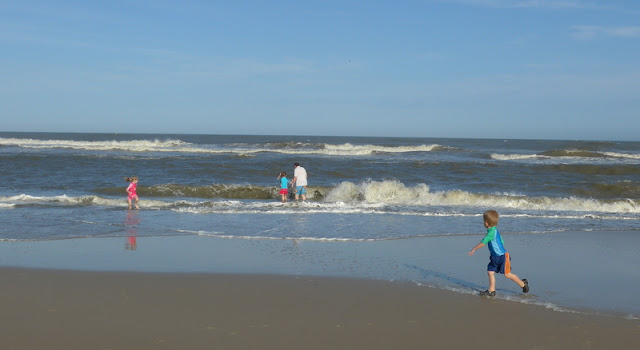 Rachel and Grandpa got a little crazy in the waves. 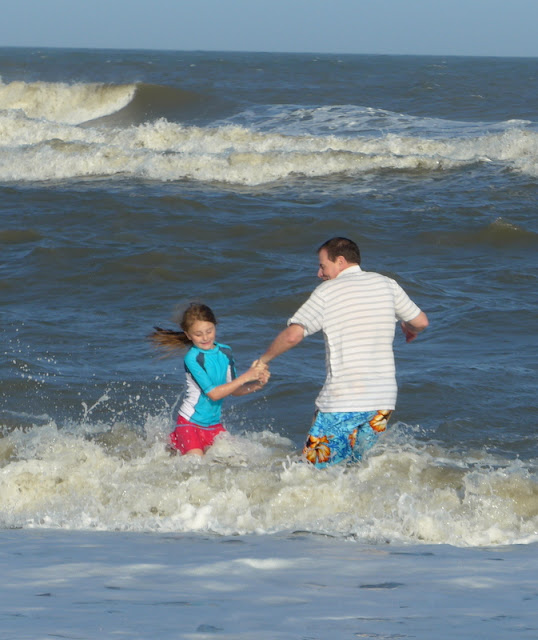 Miriam was wise and left Grandpa when she could. 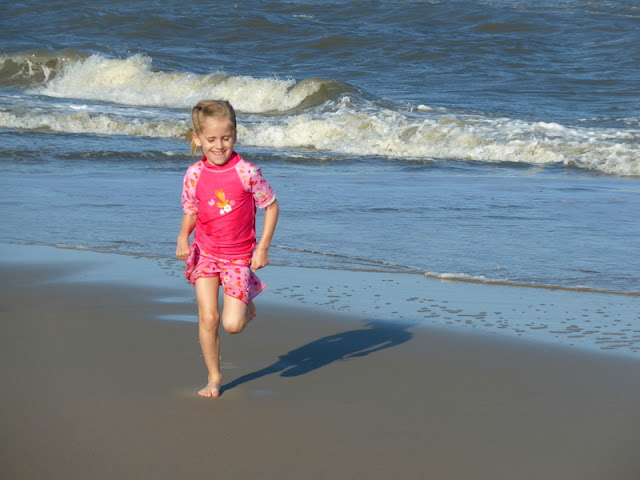 Rachel stayed to play and ended up getting dunked by Grandpa. 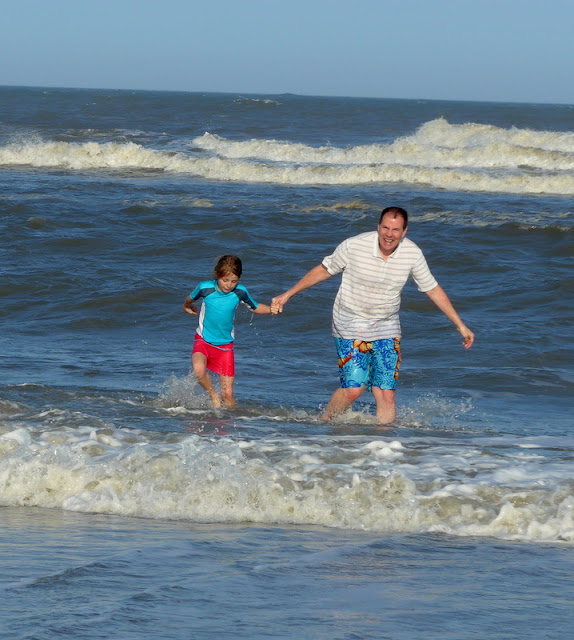 Here's Benjamin sprinting away from a wave that got a little too close for comfort: The house that we're in has five (and a half!) bathrooms so when we came inside out of the chilly spring air the kids happily claimed a few of the tubs and showers to warm up in. The view from the third floor is fabulous--we can see right over the dunes to the Atlantic Ocean and were treated to a little thunder storm our first evening. 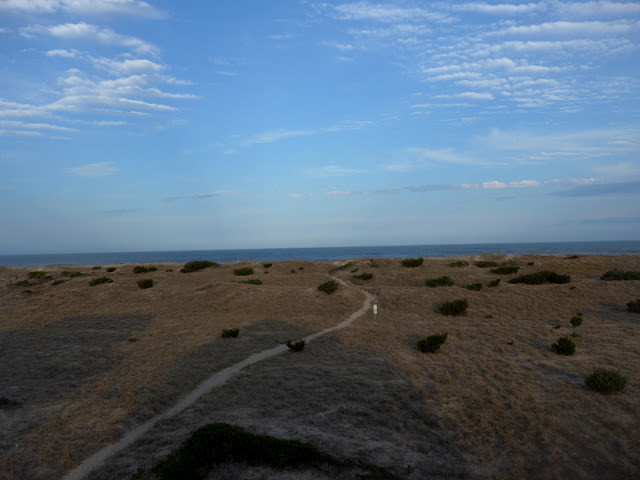 Daddy and Grandma got a little lost going shopping so it took a little longer than expected. We had a late dinner of sink spaghetti--specially made by accidentally dumping the entire contents of the pot in the sink. 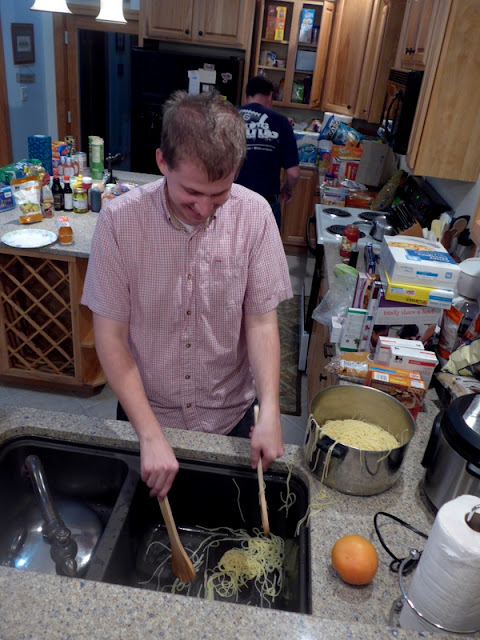 We're staying in the biggest bedroom--it has a king-sized bed and a trundle bed and, with a bathroom the size of our living room, boarders on being as big as our house. Benjamin and Zoë slept in our room the first night, though Benjamin really wanted to share "the blue bedroom" with Rachel. We told him he could if he stayed dry, and he did, so that's where he slept the second night, but the first night he slept in our room, Rachel slept in the blue room (on a queen-sized bed all by herself) and Miriam slept in the pink room (on a queen-sized bed all by herself).

Somehow, though, and much to her surprise, Rachel woke up in Miriam's bed in the morning!

She must have been doing a little sleep-walking.

Oh, and when we let Benjamin sleep in the blue bedroom he fell off the bed, which was too high for him to climb up onto by himself, and by the time we made it to him he'd fallen asleep standing up with his head resting on the bed. It was pretty funny!
Posted by Nancy at 7:41 PM