After our long day (Roanoke, Kill Devil Hills, and Jockey's Ridge) we relaxed by spending some time on the beach. Most of my time was spent making sure ‎Zoë didn't eat anything she wasn't supposed to, so most pictures are of her doing what she does best: exploring her surroundings. 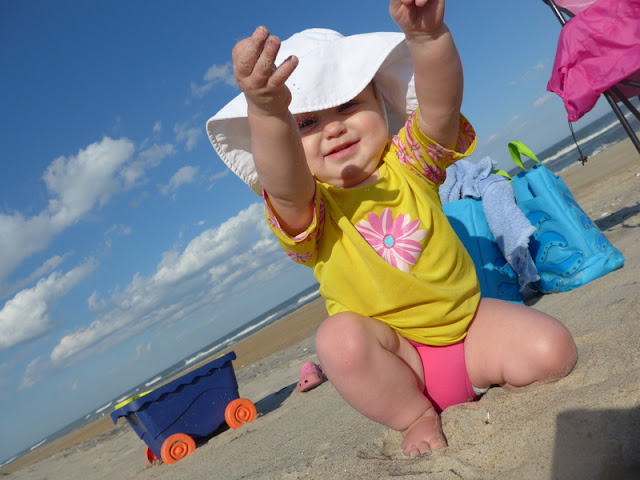 I have heard of kids being afraid of sand. Like, they scream if they have to touch it with any part of their body. Seriously--my friend Laurel took her little boy to the beach just last week and he flipped out, just couldn't handle it!

That has never been my children. 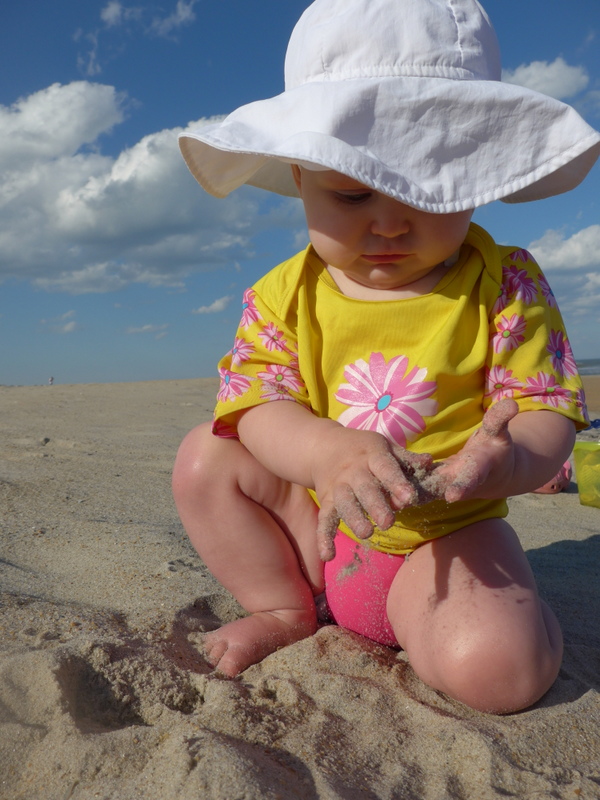 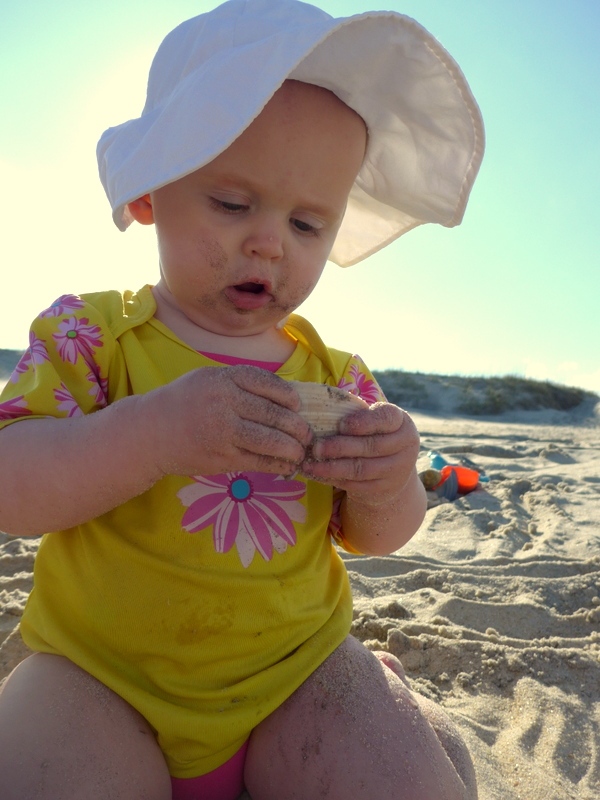 Zoë is no exception to this. She's followed in her siblings' footstep exactly in this regard.

For a change of pace, here's Benjamin a picture of playing in the sand: 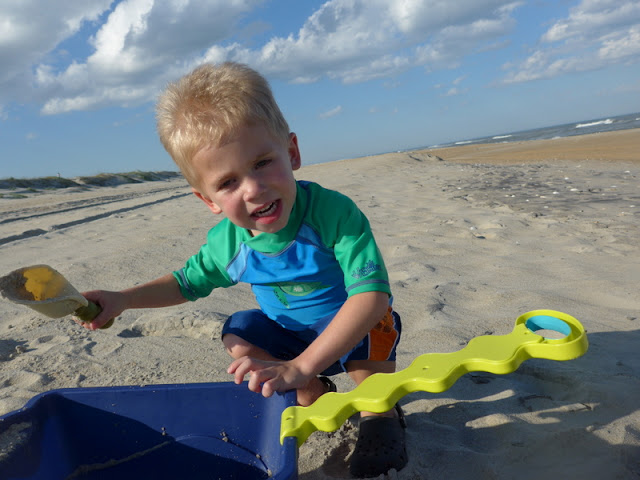 It was warm enough on Monday that the bigger kids and Daddy and Grandpa all decided that going into the water would be fun. Benjamin did not agree and neither did I or Zoë, so he hung out with us quite a bit. 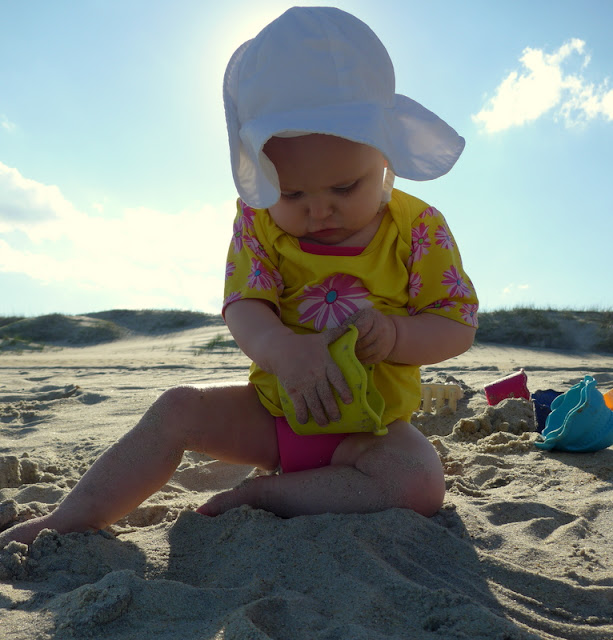 Zoë takes her playing so seriously sometimes that I wonder if she's actually having fun or whether she's too busy figuring out how stuff works to have any fun at all.

These guys look like they're having fun for sure though: 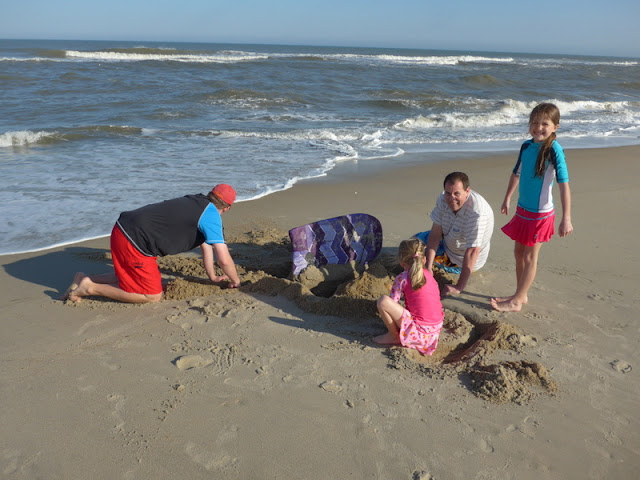 And back to Zoë: 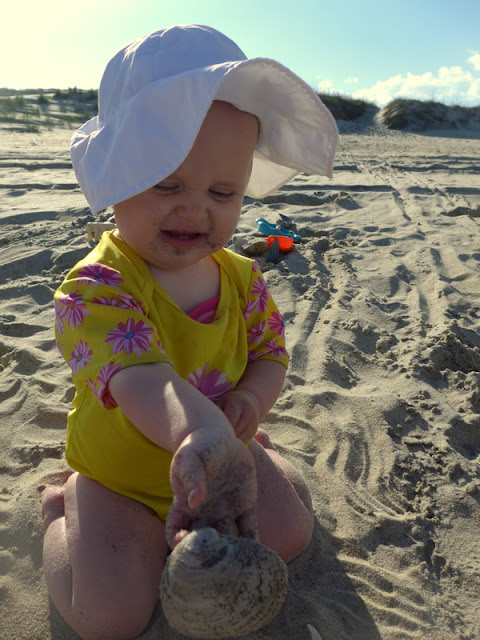 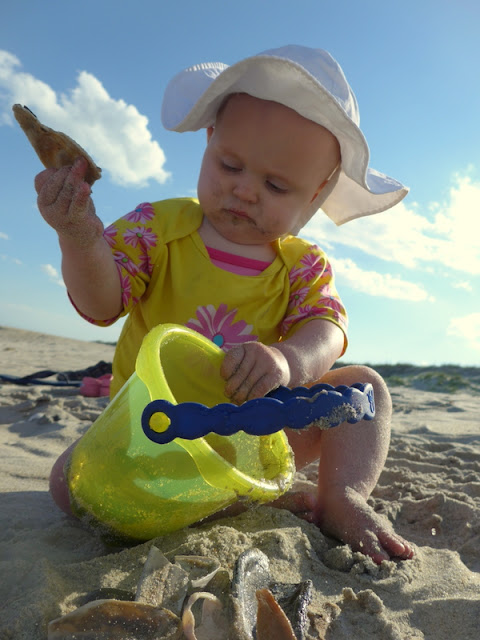 And back to the water:

Zoë eventually decided that the water looked like fun so she took off crawling toward the ocean as fast as her four little limbs could carry her: 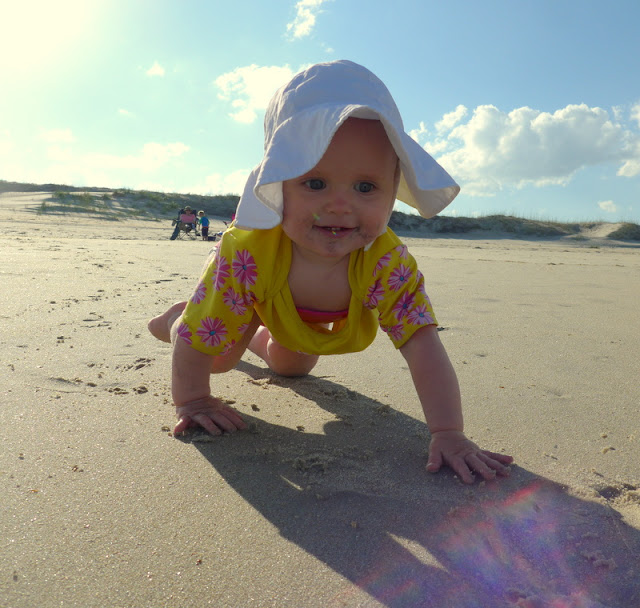 By this time her sisters and Dad were boogie boarding, in the freezing cold water! 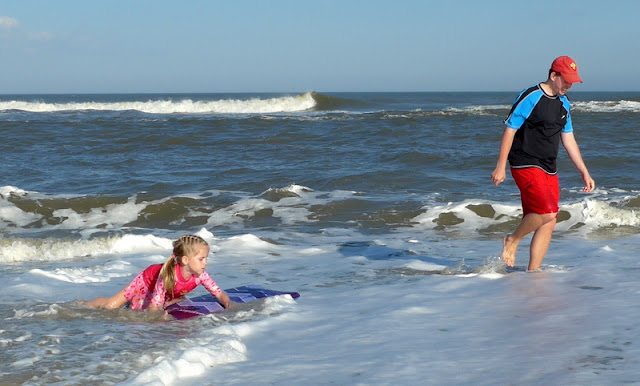 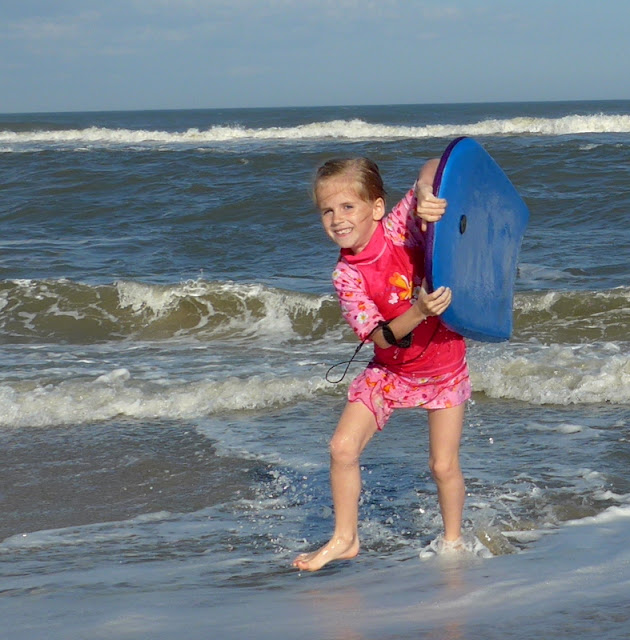 Daddy took her out to see the ocean close up: 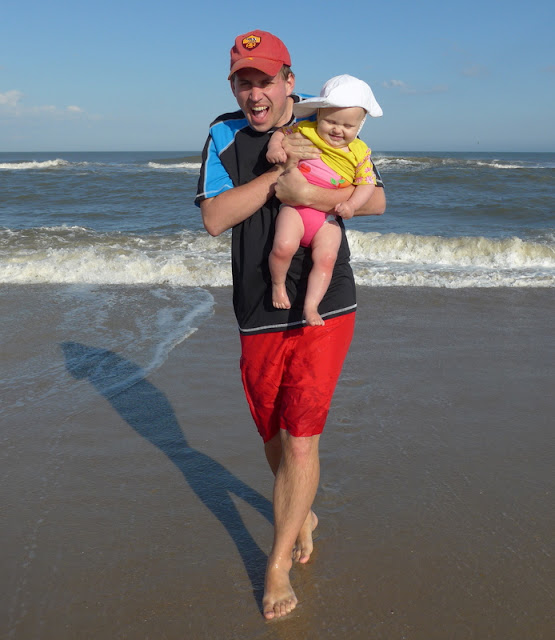 And she seemed to almost enjoy it... 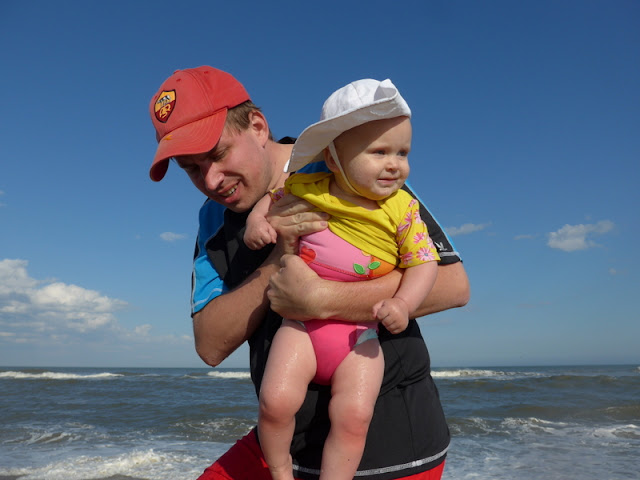 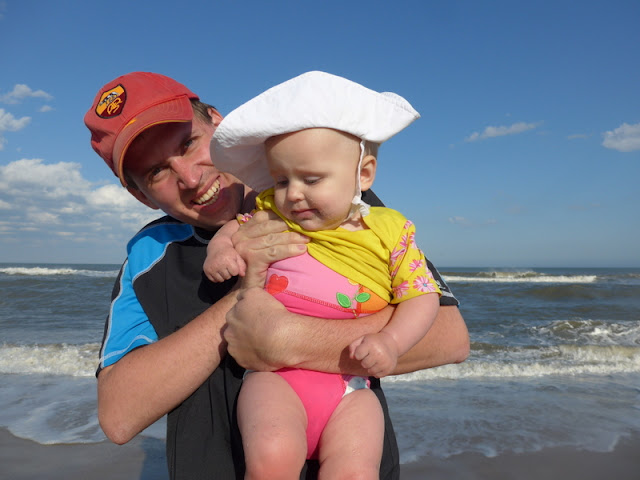 ...until Daddy put her down in front of an incoming wave. 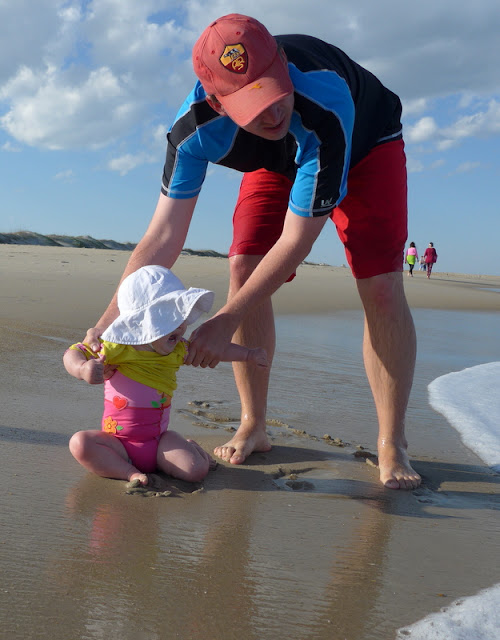 She yelled at it to stay back, roared at it with all of her might, screamed like she's never screamed before...but that big, terrible wave rolled right onto the beach and lapped at her hands and knees anyway. The nerve! 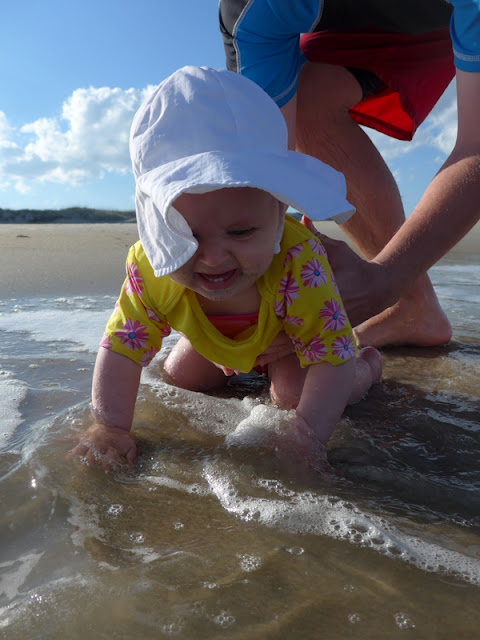 She snuggled up on Grandma's lap to warm up and watch her family boogie board from a much safer distance: 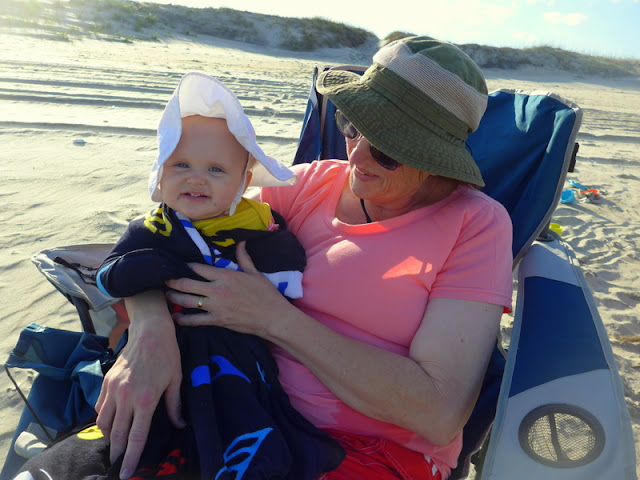 Poor Rachel got grabbed by a wave and rolled around several times. She was not too happy about it! 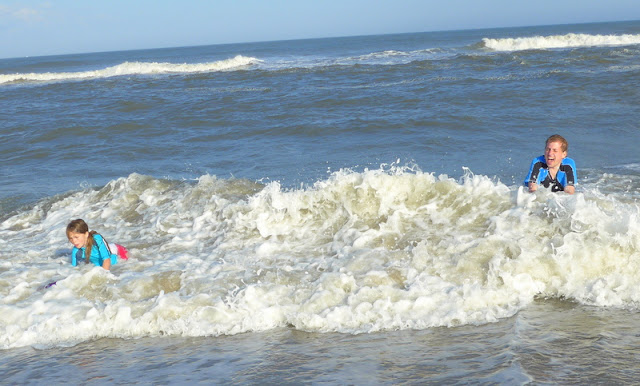 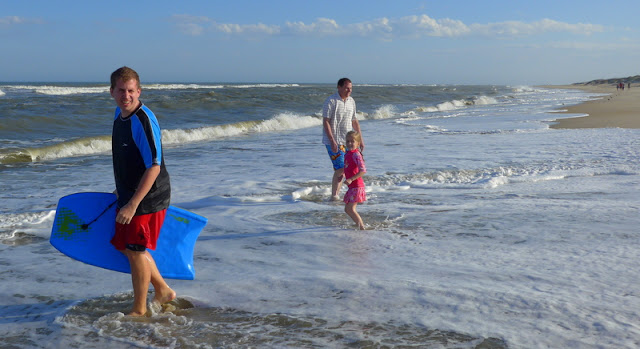 But at least Zoë was happier about life: 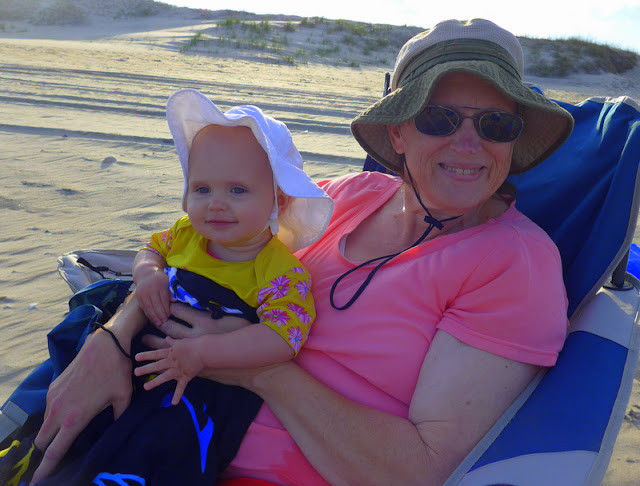 Even the wettest among us didn't stay in the water for long; it was far too cold! We got a lot of beachcombing done, though. Andrew found a whelk egg case (which we thought as a snake at first, but really it's an egg case (and can hold up to ~100 whelk eggs (whelks are a type of saltwater snail))). 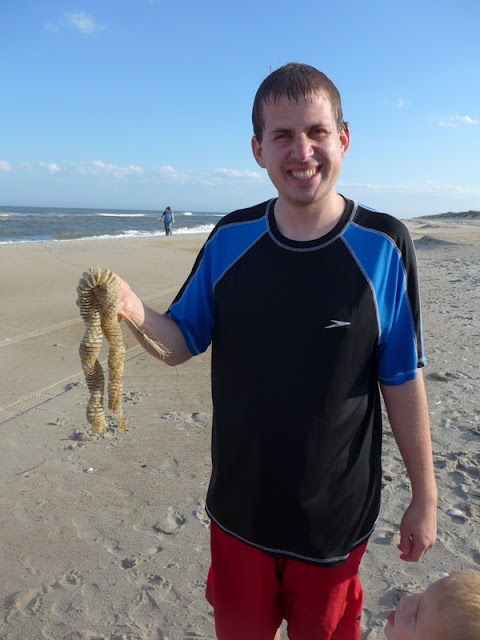 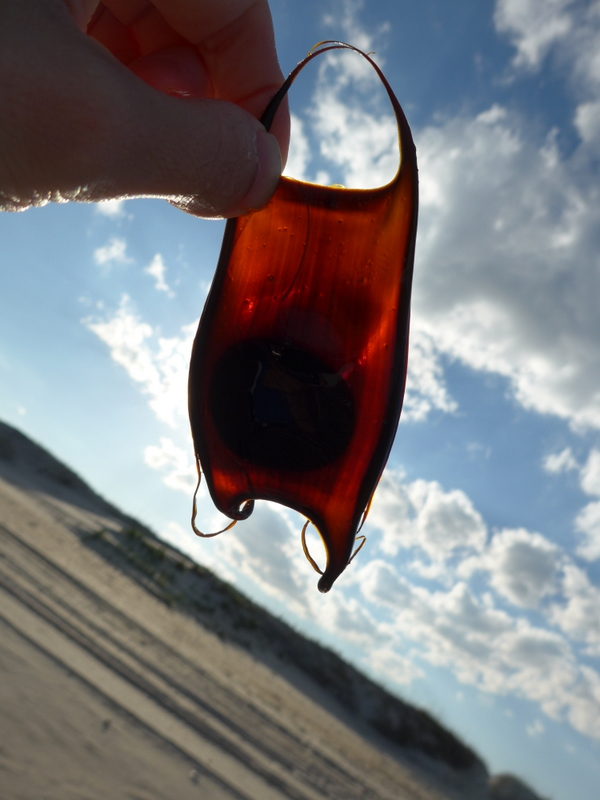 Miriam found an empty one dried up on shore and was so excited to have found a mermaid's purse (which is really a name for these; she wasn't making it up). If the number of empty skate cases i any indication of how many rays are in these parts, I'd say their population is booming! 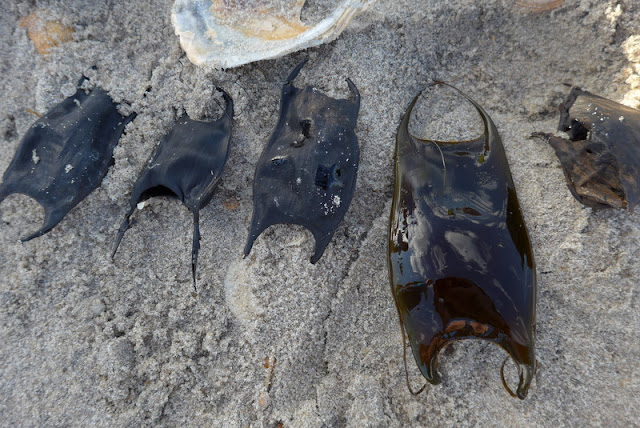 Here's Grandma holding the skate egg case up to the sun so she can peek inside: 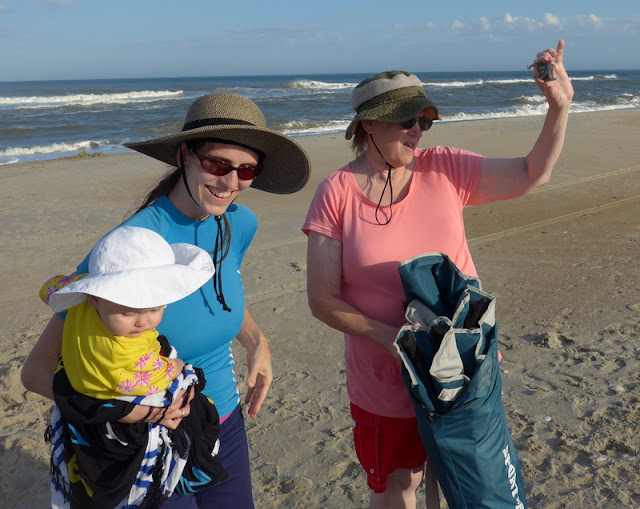 (I look so much like my Grandma Conrad with my hat on that I find it hard to believe!) 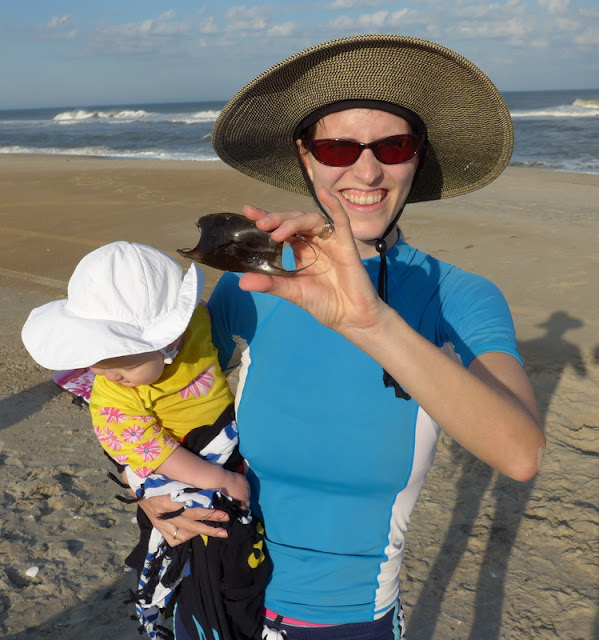 Part of me wanted to keep the egg case to see i we could hatch it (or dissect it) but I talked myself into returning it to the sea to give it a chance at life (and when I did so Andrew said, "It'll probably just get eaten anyway..." but it's the thought that counts.

Funnily enough, Benjamin had been crying in the morning about wanting to have sting ray for breakfast (an idea planted in his mind by a teasing grandpa) "We're fresh out of sting ray," Grandpa told him (after suggesting it in the first place).

And then here we stumbled up on a perfectly good ray (of sorts) and I tossed back into the ocean when I could have saved it for my little boy's breakfast.

I wonder what scrambled ray eggs would taste like.

We're not a very sea-food-loving family so I think all sorts of rays are safe from our palates. But just in case you ever get the hankering, here's a recipe.

Here's a couple final pictures of Zoë in the sand, just for good measure. You know, in case you hadn't seen enough pictures of her playing in the sand yet. 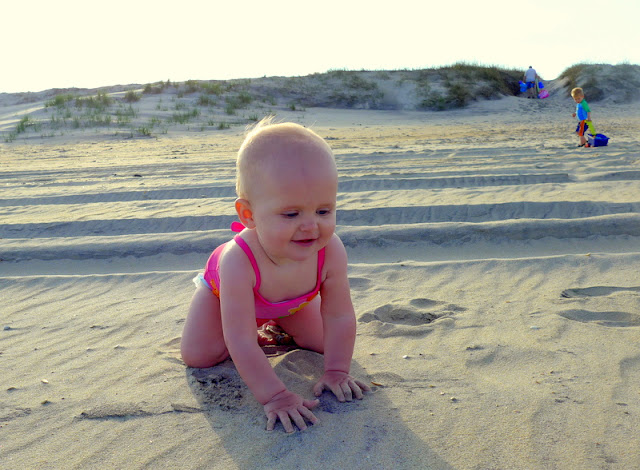 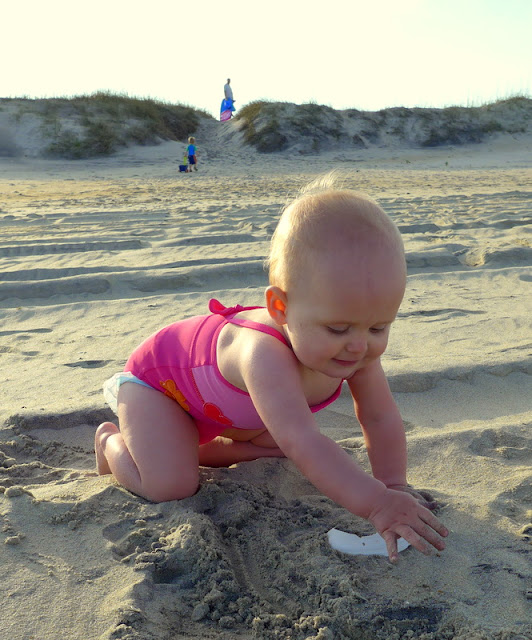 And that brings us up to speed for Monday, I believe.

Phew! This baby won't sleep so I've been typing one-handed and I can't decide which arm is going to fall off first--the one holding her or the one dancing around the keyboard!
Posted by Nancy at 1:23 AM