OBX: Hattaras Lighthouse and Graveyard of the Atlantic Museum

On Tuesday we headed to Cape Hattaras to visit the iconic lighthouse, the tallest brick structure in the United States (at 210 feet tall). The current tower was built in 1870 but due to shifting coastlines was moved (in 1999) about 3000 feet to keep it safe from the ocean for a few more years (hopefully about 100). The exhibit room showing the process was fascinating (and kind of reminded me of how the Provo Tabernacle was redone after the fire gutted it--by putting it up on stilts, only the lighthouse was put up on stilts, had a platform built under it, and then was pushed on a track until it was sitting on its new home). Crazy feats of engineering! 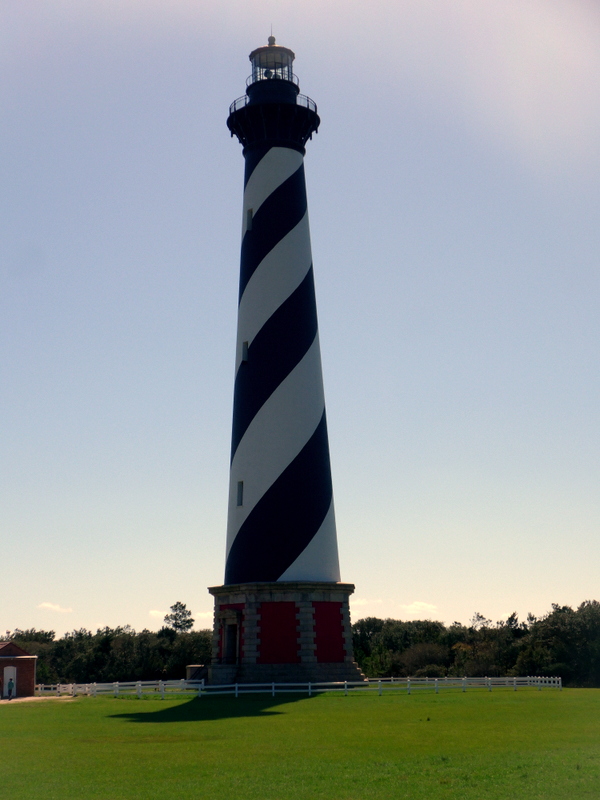 We picked up Junior Ranger booklets at the ranger station. Rachel was super excited about that, but she was not very excited about pretending to be a lighthouse on the steps of the lighthouse (a tragically clear indication that she's growing up). 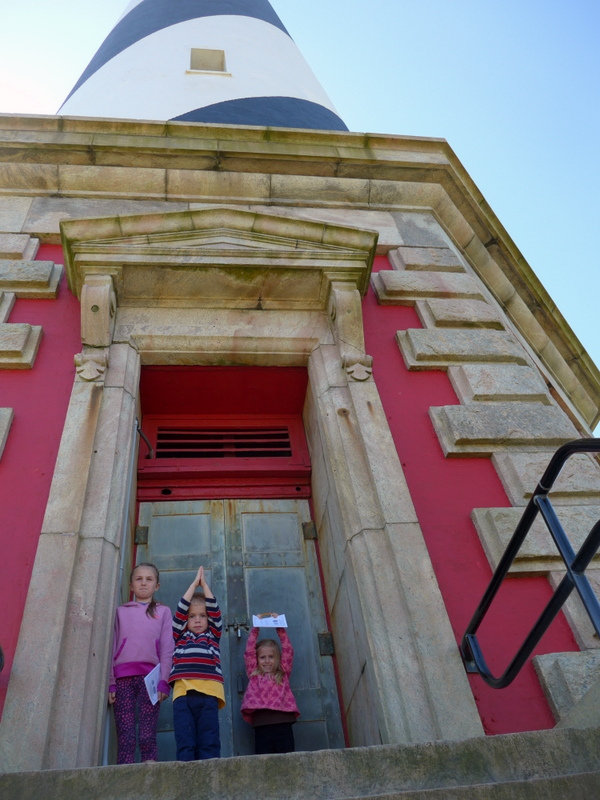 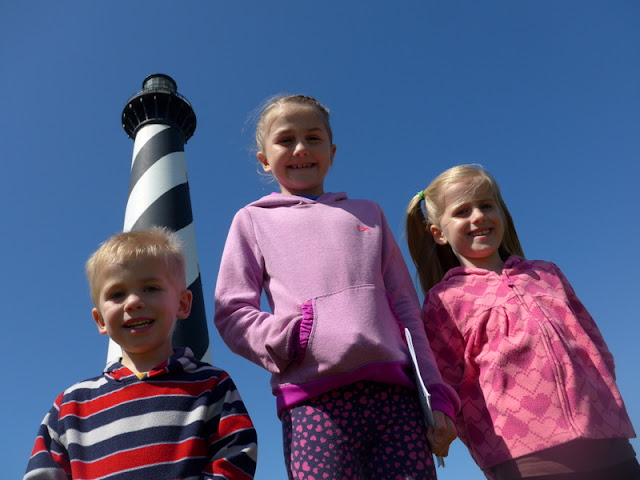 And then I reminded Andrew that we actually have four children and should probably include Zoë in a few of the pictures. So I took her out of the front carrier and made her endure the cold air so we could get photographic evidence that she came with us: 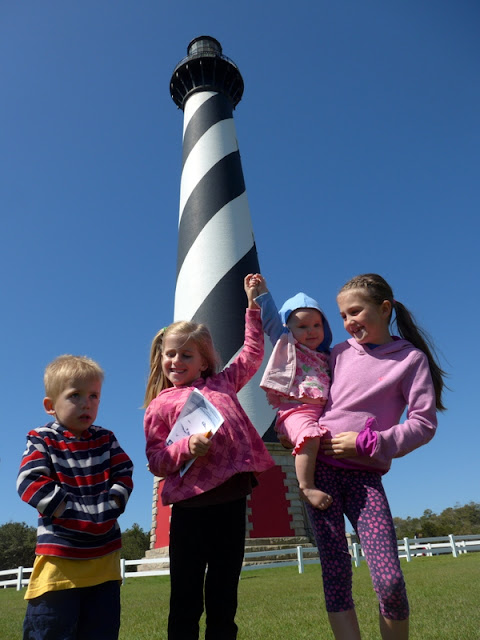 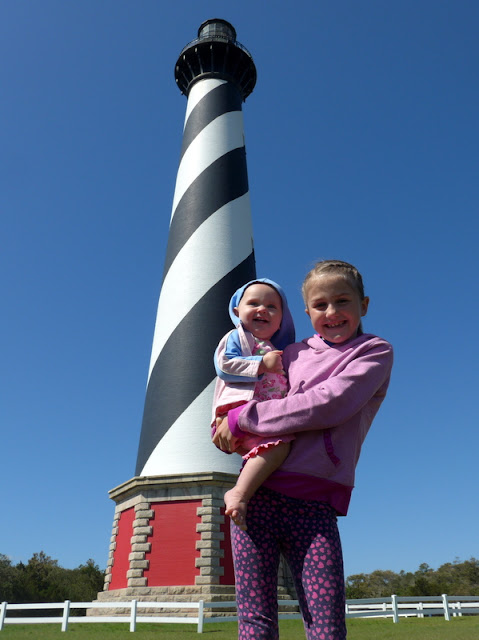 Andrew had to get down low in order to get the whole tower in the shot. Grandpa and Benjamin decided to sit on him: 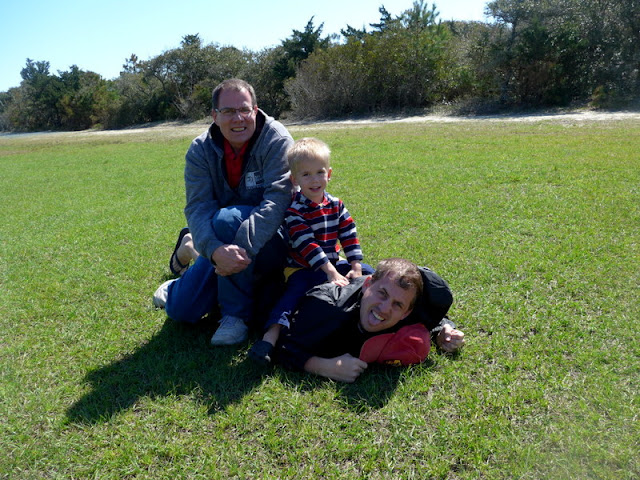 Here's our whole family by the lighthouse: 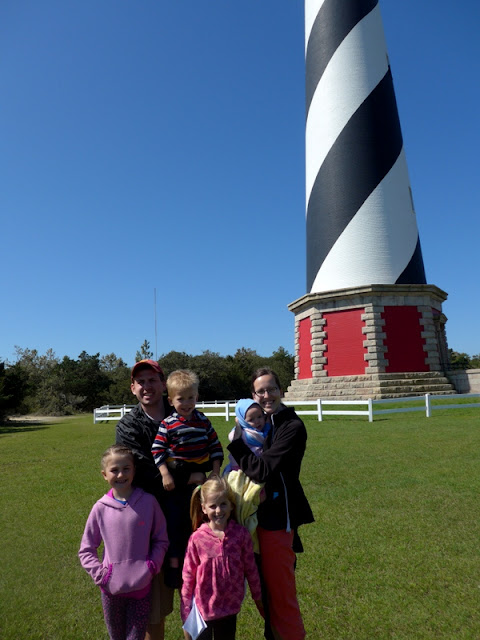 Here's Benjamin pretending to be a lighthouse: 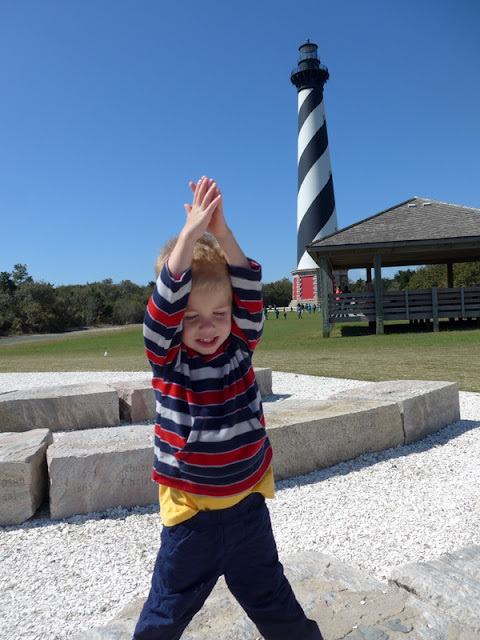 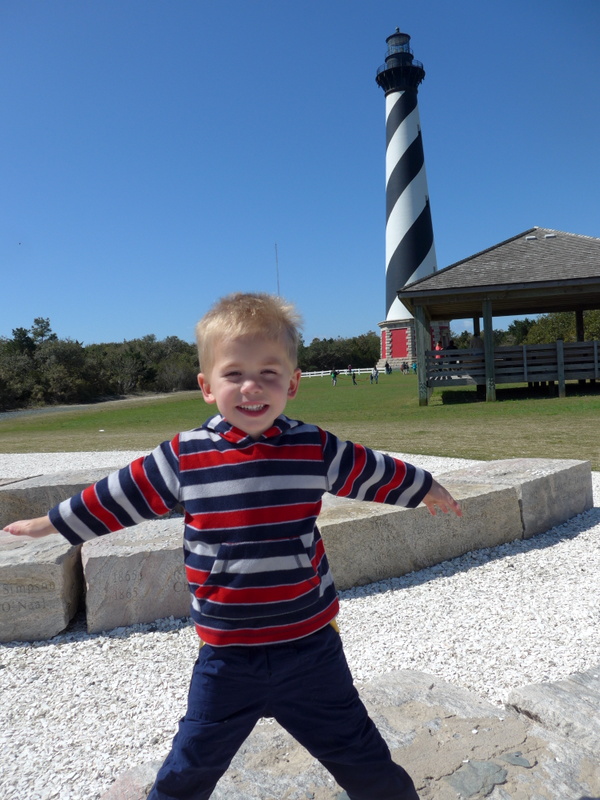 And here are the kids with Grandma and Grandpa: 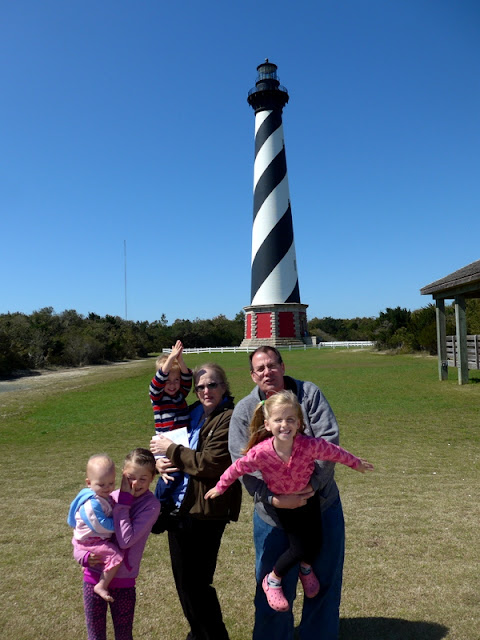 Our plan was to catch the ferry from Hattaras to Ocracoke. It's part of the highway system, so while it's free, it's also used heavily, and you can't reserve tickets in advance, so it's a bit of a gamble. We got in line around 10 or 11 and sat and sat and sat as we watched other lines of cars go (three ferries came and went) and eventually we decided it wasn't going to be worth the wait when we learned we'd still be waiting for a good two hours. And then we'd have an hour ride to Ocracoke. And then we'd have to get to the lighthouse and then get back to wait in line for the ferry to come back to Hattaras. It was getting too late in the day and the little ones were getting restless so we decided to postpone this activity until later.

Benjamin was upset about this because although he was bored, the only thing he wanted to do on this trip was ride on a boat. Miriam was distraught simply because she'd had her heart set on visiting Ocracoke. Rachel was fine (another sure sign that she's growing up).

To pass the rest of our afternoon we headed to the Graveyard of the Atlantic Museum. The shoals and things along the coast make for treacherous waters, thus all the lighthouses and all the wreckage. There are hundreds of sunken ships off the coast. The museum served as a fine diversion from our Ocracoke obstacle, but it wasn't as impressive as I was expecting it to be. Still, we had a fun time. The kids pretended to be Black Beard the Pirate... 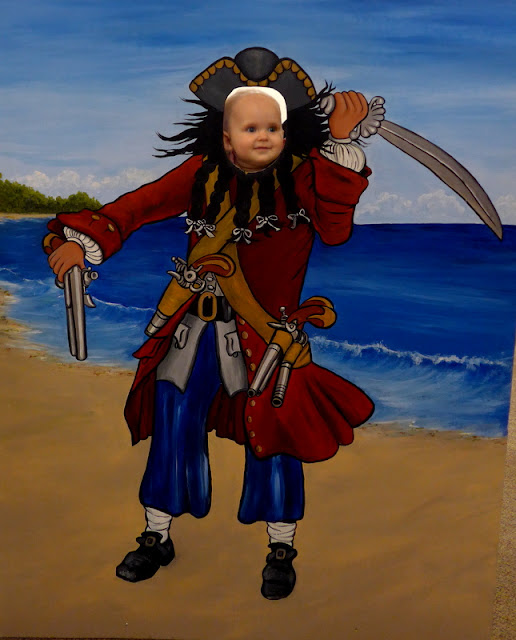 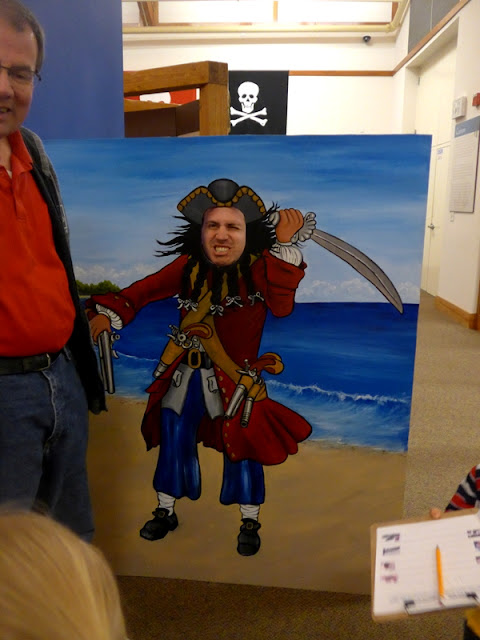 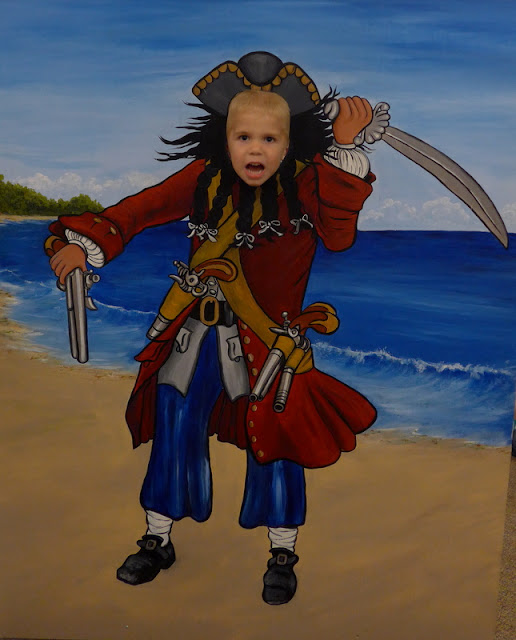 The kids also got to do a little scavenger hunt to earn a prize (a little bracelet). Miriam made very good effort to describe what each picture was about. She wrote things like, "Women hand-tying fishing nets" and "a boy soldier from the Civil War." Rachel, on the other hand, filled out her paper with snarky little answers: "life saving" and "not unsinkable" and "old." Another sure sign she's growing up. Benjamin just crossed things off as he found them. All three of them earned their bracelets. 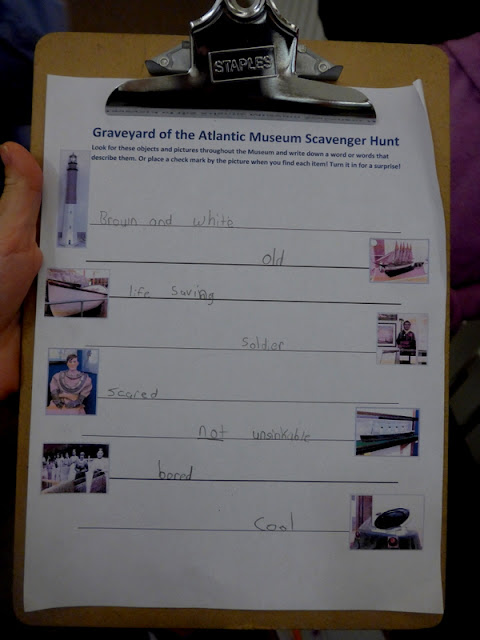 We went on a (chilly, chilly) walk along the beach after the museum before coming home. 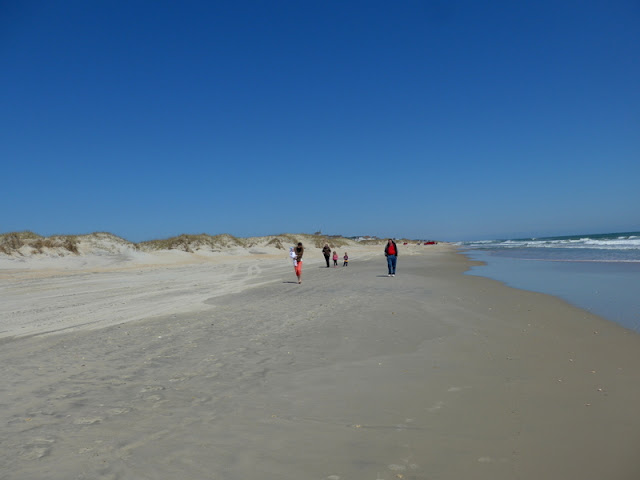 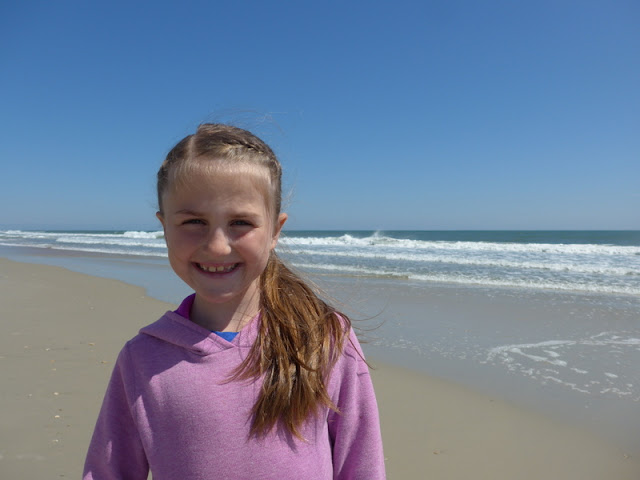 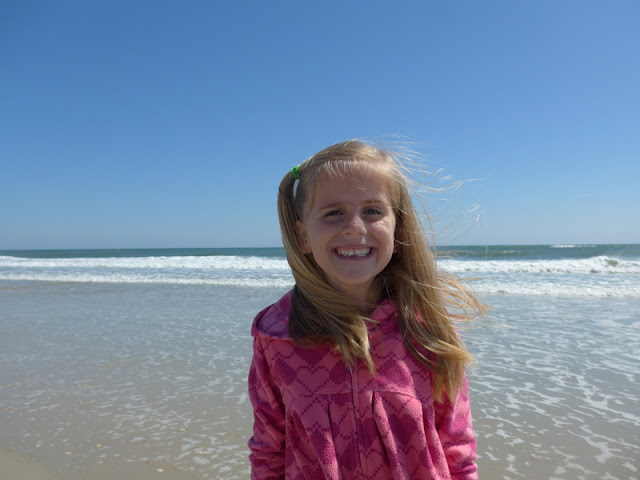 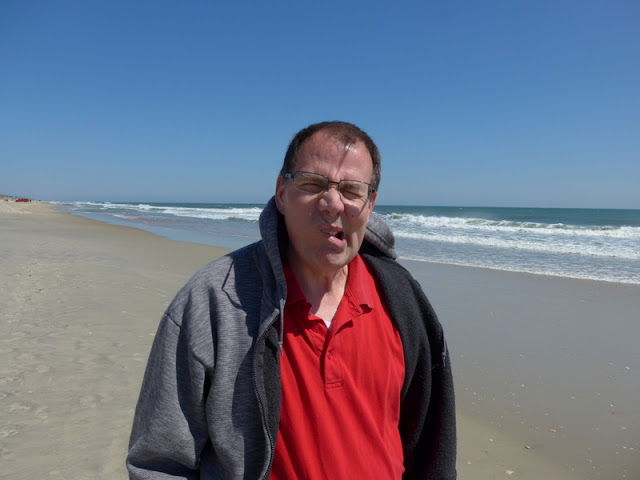 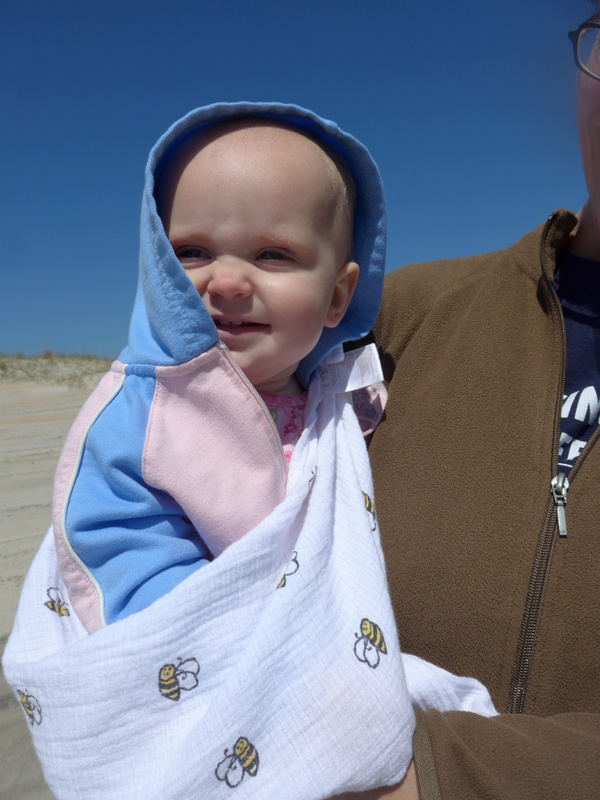 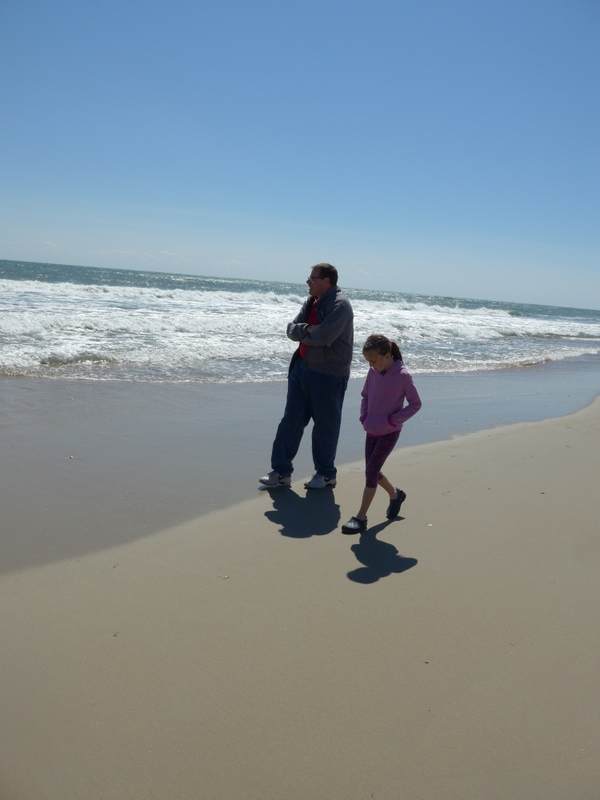