We've been meaning to visit Pullen Park for the past three years or so but somehow we haven't managed to make it down there. Miriam loved the carousel at Disney World (we went in the summer of 2013) so we figured we'd take her for her fourth birthday that year. But Grandma Sharon unexpectedly passed away and Andrew ended up spending Miriam's birthday in Utah, which meant that the rest of us just stayed home (since Mommy doesn't drive to Raleigh). And then we kept meaning to make it...and kept not doing it...until today when Grandma suggested we just go do it. 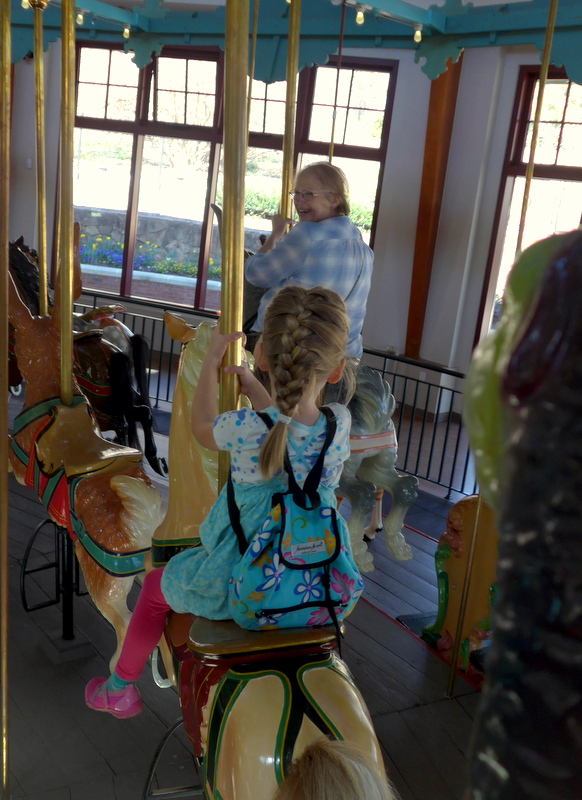 Pullen Park was the first public park in North Carolina and is the 5th oldest, still operational, amusement park in the United States (and the sixteenth oldest in the world) (source). It opened in 1887, as I believe Rachel mentioned, so visiting it was a little bit fun and a little bit historical.

We went on the carousel first—because some of us just couldn't wait!—but it ended up being a major disappointment because Miriam and Grandma chose seats on the outside of the carousel and those seats didn't move up and down; they just went around and around. So we ended up going back again, which was a good thing because I'd neglected to put the memory card into the camera (but Rachel had the "kid" camera with her so I switched it out later (she really saved the day) and was able to get some pictures (because we wouldn't have been able to survive without pictures)).

The carousel in the park today was installed in 1921, though it was made in 1900 (and was originally in Bloomsbury Park. It's a Dentzel original. Apparently that's significant. I don't know much about carousels, but I do think it's neat that they're taking such great care to preserve this one because I think history is important. They've built a building around the carousel to preserve it and made extensive repairs in the 70s and 80s, uncovering the original paint and documenting it so that they can keep it looking like it originally did.

Benjamin and I rode on pigs the first time, while the girls stuck to ponies. Miriam chose a pony the second time and it even had a "real" tail, which she thought was neat: 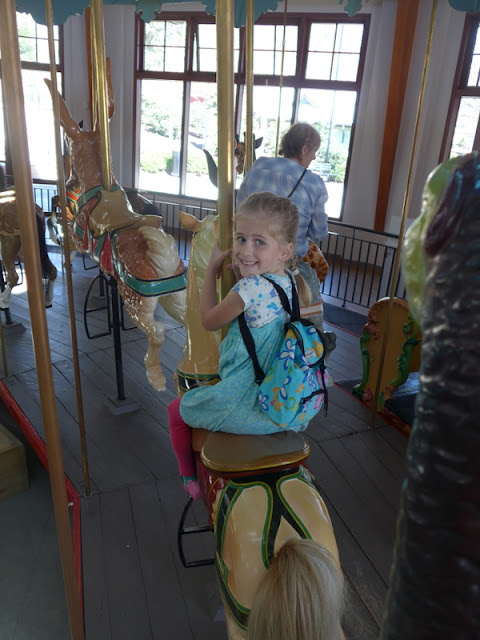 But I'm getting ahead of myself...

Our next stop was the train—because some others of us (Benjamin) could hardly wait for that!—and it was so much fun! We made one round around the park, crossing a couple of bridges and getting a nice tour of the pond. 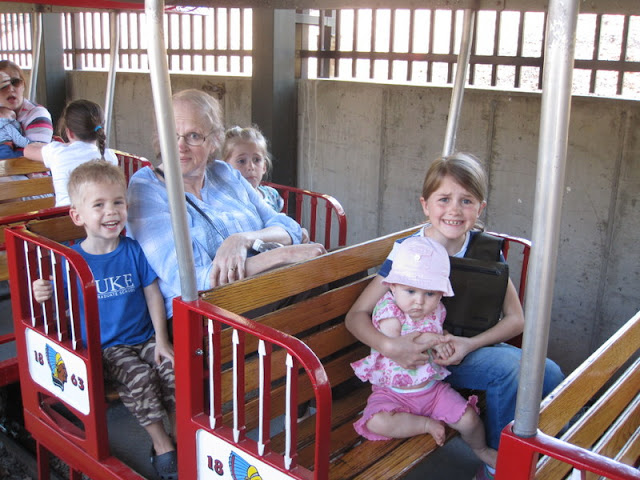 The train was installed in 1950 (and a second one in 1971). I don't know which train we rode, but it didn't matter because it was a train and, therefore, thrilling. 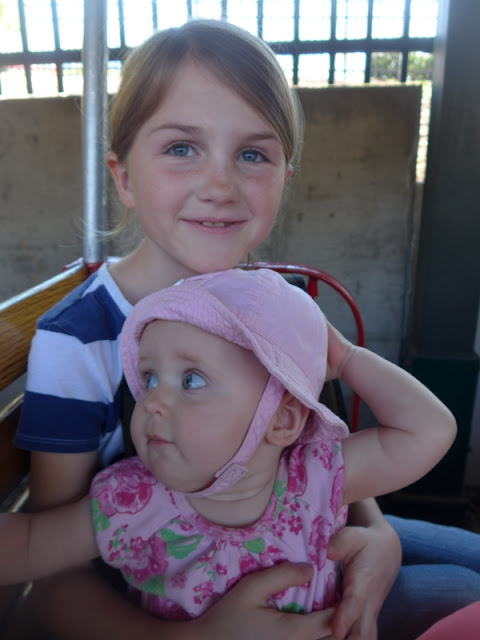 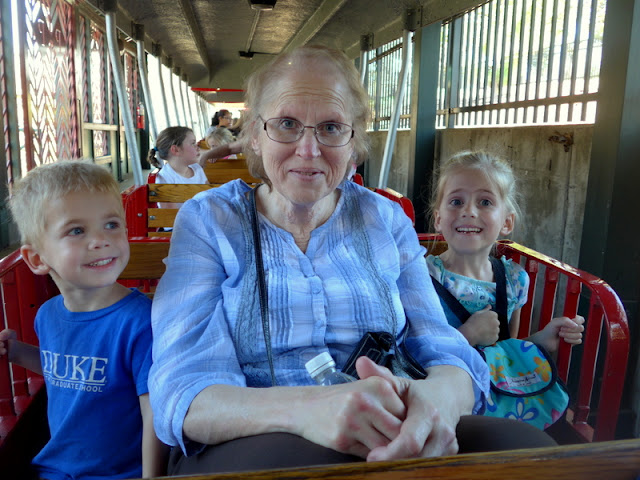 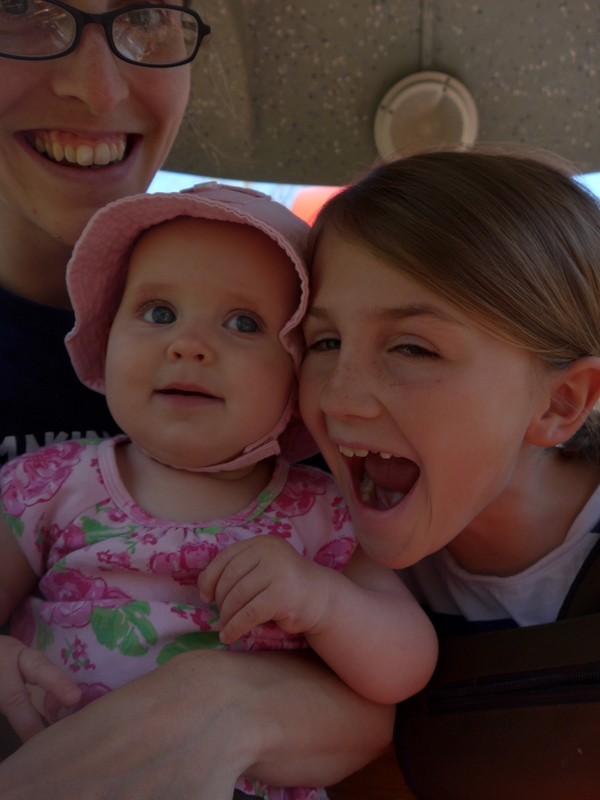 After the train the three big(ish) kids rode on the kiddie boats. Benjamin loved it. Miriam thought it was so-so. Rachel thought it was super lame-o. She probably should have just watched, but she was short enough to ride so thought she'd give it a go. Lesson learned: she's too old for that kind of a thing. She had a good attitude about it, though, and helped her sister and brother have fun. 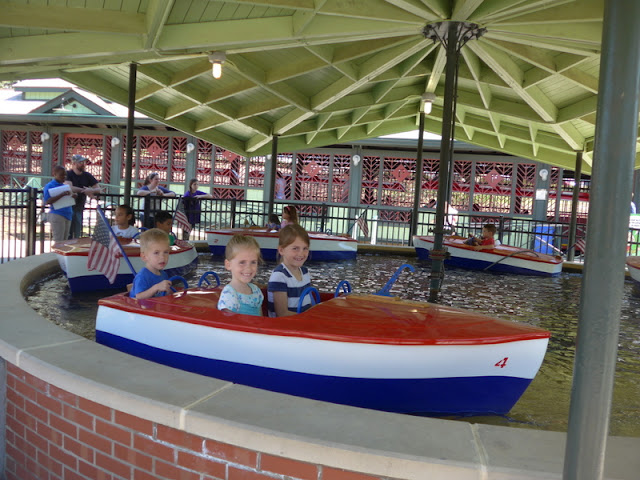 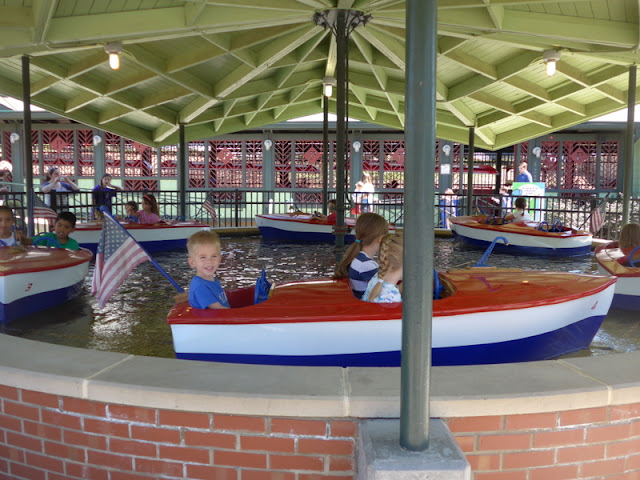 They also had a (full-sized) train car to explore, which Benjamin was super excited about because the one at the Museum of Life and Science has been closed for the past year or so while they're doing some reconstruction work on it. He asks if he can go inside every time we pass it, so he was thrilled to be able to go inside this one (and did so more than once). 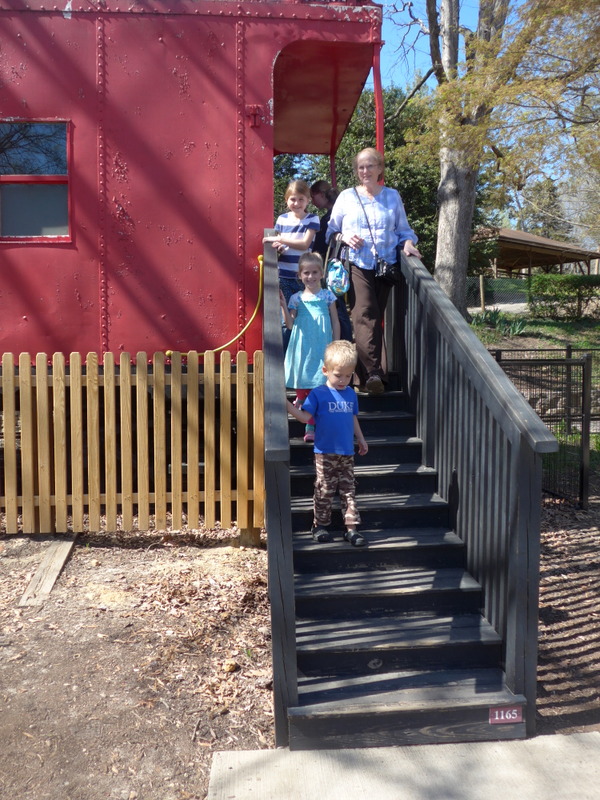 We played at the playground for a while: 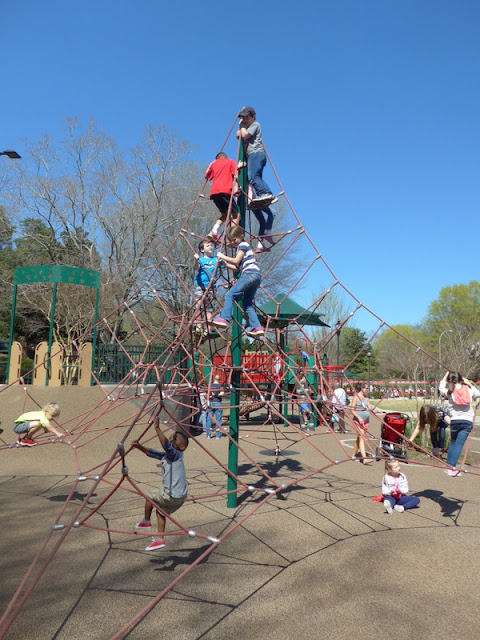 And then headed back to the carousel, being careful to select animals that moved up and down. The girls stuck to horses again: 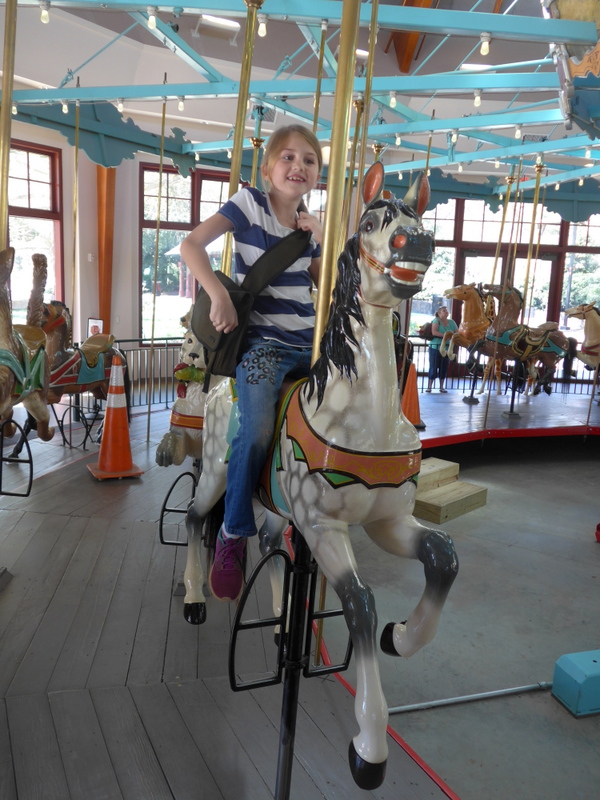 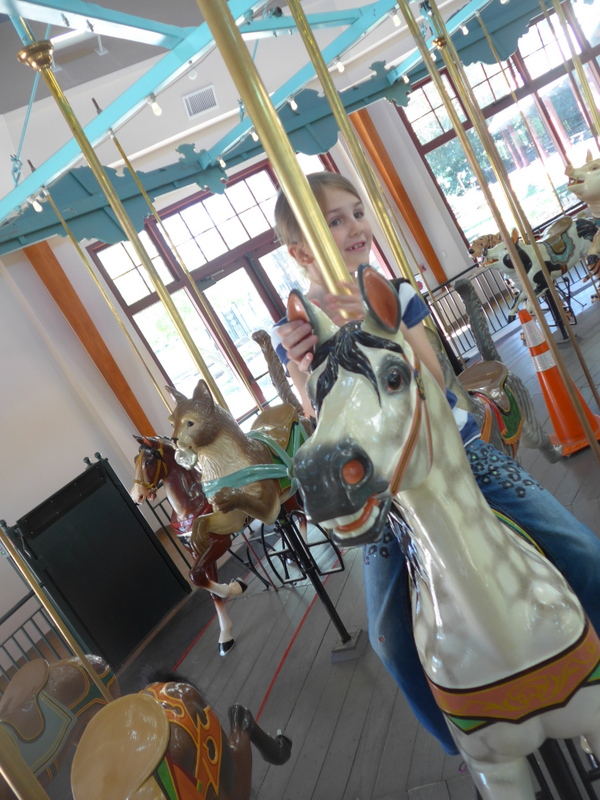 Benjamin chose to sit in the chariot (which doesn't bounce up and down, but he didn't mind): 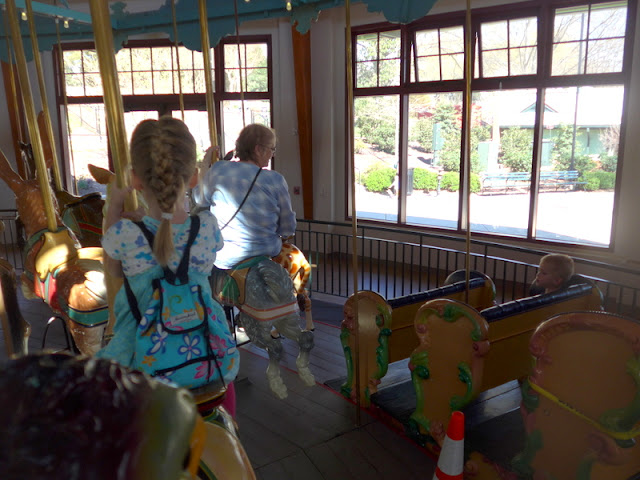 You can't tell, but Zoë and I are riding on an ostrich. Zoë was not particularly fond of the carousel. In fact she was rather freaked out by it. I tried to sit her down on a horse to take her picture and she would not have it. 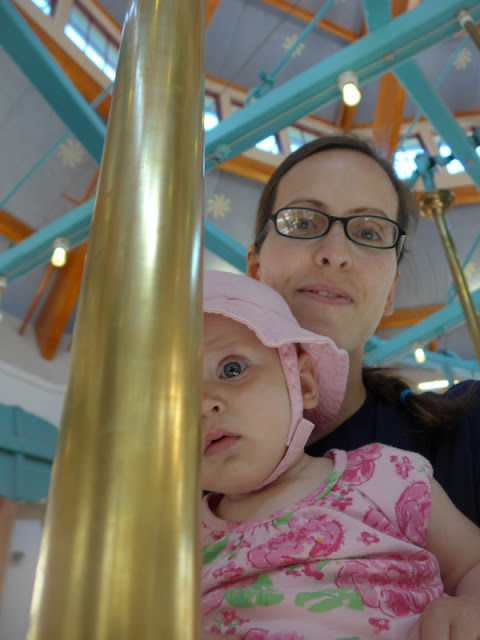 Here's Miriam waving to her reflection: 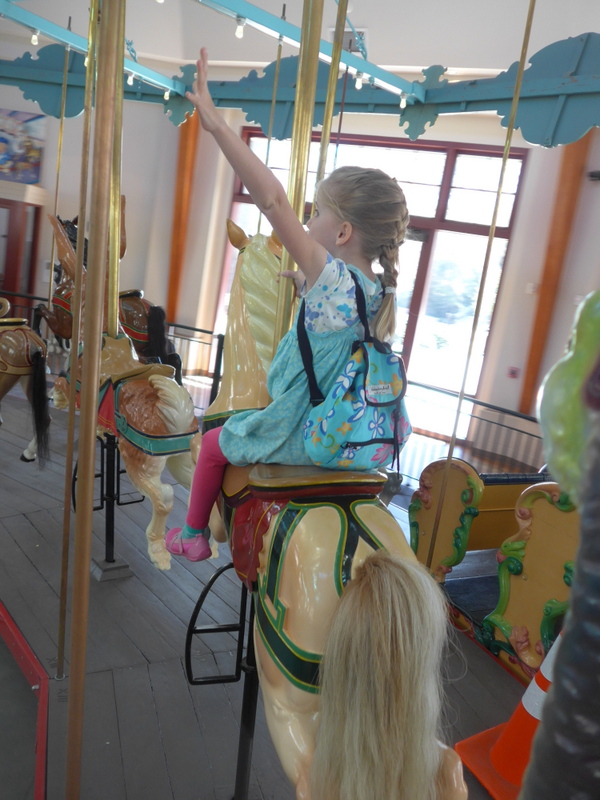 And here's Benjamin watching all the machinery at work: 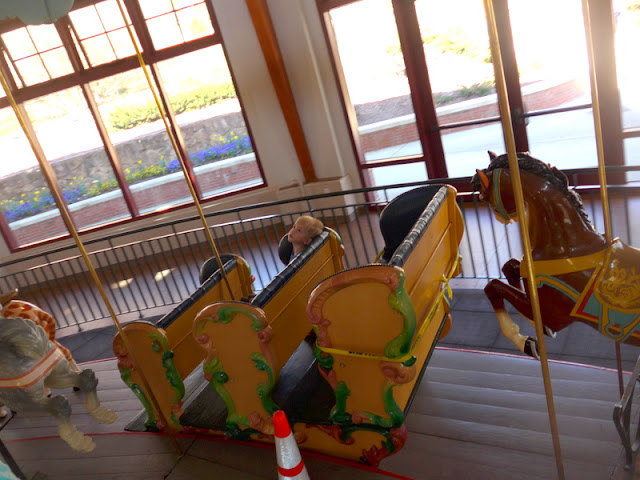 We headed back to the playground after our last carousel ride, which is where Rachel managed to face-plant on the ground. We also got to help a little (barefooted) girl find her lost grandpa. She was so cute, and did everything just right. We were all sitting on (and standing around) a bench having a little snack and she pushed her way through my children so she was standing right in front of me.

"I am!" she said. "I was just playing with my granddad and my little brother but now I can't find them anywhere."

"Well, I'm glad you asked for help. Let's see if we can find them."

She wasn't able to tell us what her grandpa was wearing, but I soon spotted a frantic grey-haired man carrying a pair of little girl shoes.

"Is that your granddad?" I asked, pointing him out.

They were happy to have found each other and it was a good opportunity to remind our kids of what to do if they ever get lost: find a mom or dad with lots of happy kids with them (or another safe stranger, like a police officer or someone who works at the place you're at) and ask for help.

Rachel's face-plant pretty much ended our day. She didn't feel like playing after that, so we decided to head back to Durham. We stopped at Chick-fil-A for dinner to use the gift cards the kids got for Christmas since we knew we'd never go with Daddy (he doesn't like chicken so there's really no reason for our family to dine there since everything on the menu is...chicken). We used our free dessert cards that we got from our neighbourhood Christmas party as well, and I gave Zoë some licks of my ice cream cone, which might have been a mistake. She may never eat any other type of food ever again—she thought ice cream was divine.
Posted by Nancy at 10:36 PM