It was ridiculously cold and windy on Saturday, but everyone headed to the beach nonetheless (well, everyone aside from the women and babies). No one stayed very long or got very wet. Here's Daddy and Benjamin walking back from the beach: 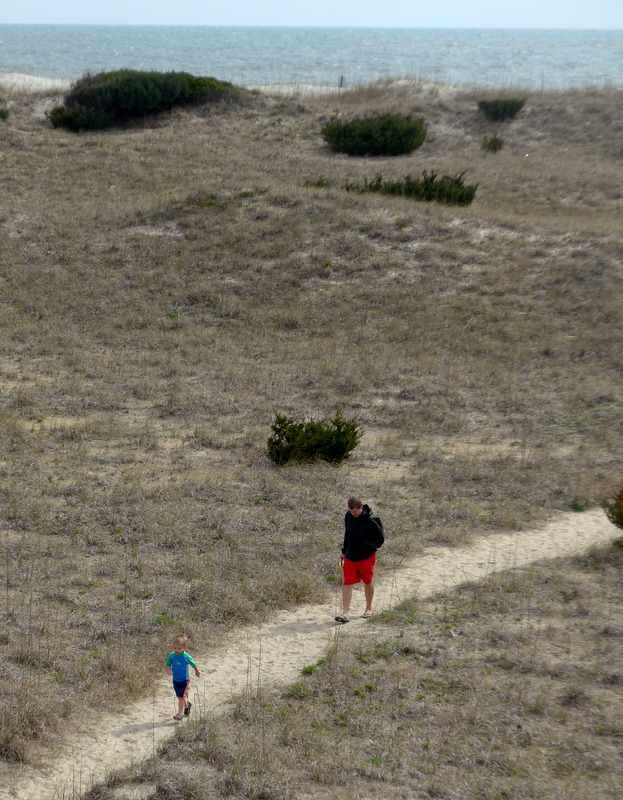 And stopping to wave to me and Zoë: 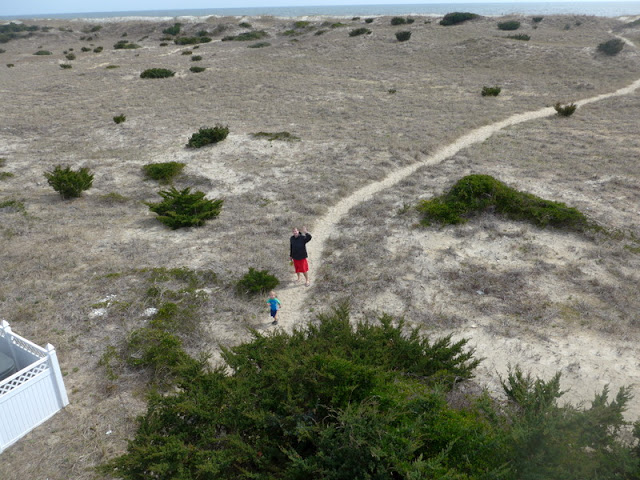 We weren't the only crazy ones to hit the beach on such a cold day; we got to watch several kiteboarders pass by our window (though I suppose we never saw the surfers themselves; only their kites):

We spent most of the afternoon playing board games (and Mommy managed to grab a little nap while Grandpa took Zoë out on a walk (she took an even littler nap)). Here's everybody playing Settlers of Catan: 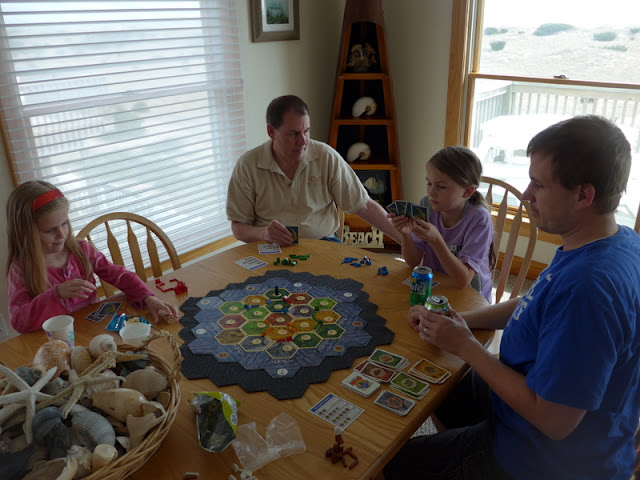 When I woke up from my nap we headed out to the Bodie Island lighthouse. It's out by Nags Head and Kill Devil Hills, about a half hour north of where we are (in Salvo) and about a half hour south of Kitty Hawk (because measuring distance in time makes sense). The Outer Banks are a narrow chain of islands off the shore of North Carolina. The drive on these islands is, at times, quite narrow.

And then there were the bridges! Miles and miles of bridges! Here is the view from one f the bridges we were on of the bridge stretching out in front of us (and then turning--the bridge we were driving on connects to the bridge rising up on the horizon in the left). I was so happy to have Andrew drive for us!

It was cold and windy at the Bodie Island Lighthouse, too! We didn't stay very long because everyone was feeling a little miserable (due to being underdressed for the weather). 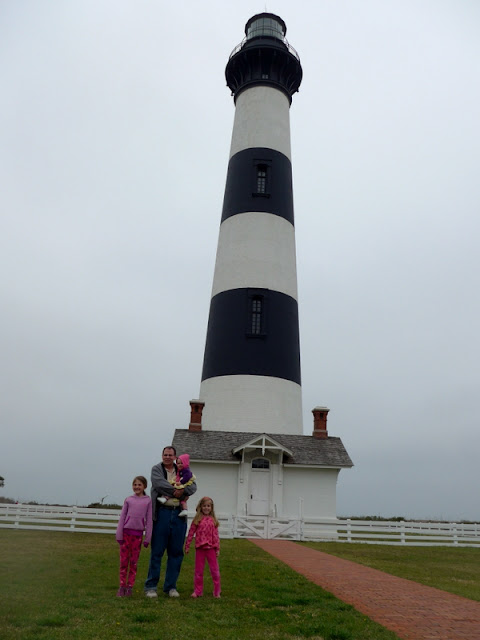 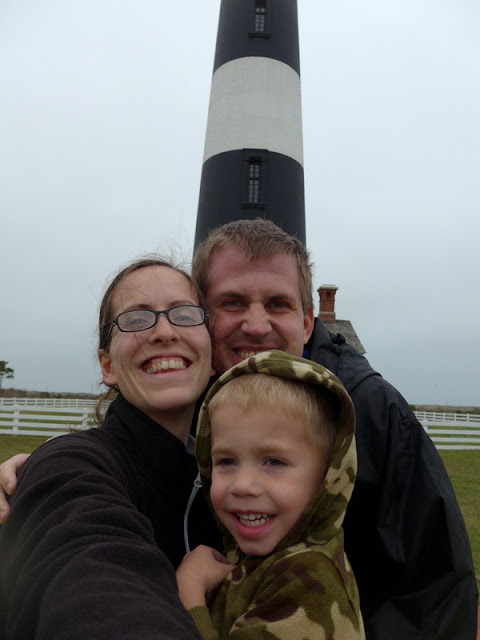 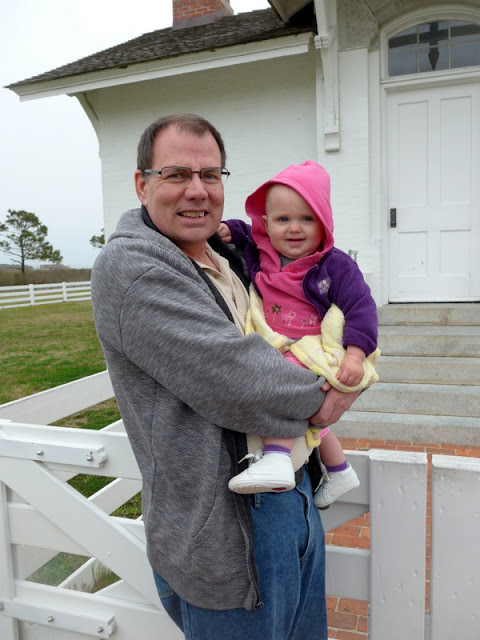 The current Bodie Island lighthouse was built between 1870 and 1872 (it's the third on this (or almost on this) spot: the first was overtaken by the sea and the second was destroyed by the Confederates (afraid it would be used as a lookout by Union soldiers). It's 165 feet tall, so two feet taller than the Cape Lookout lighthouse we visited in October, which is weird because it didn't seem as tall. 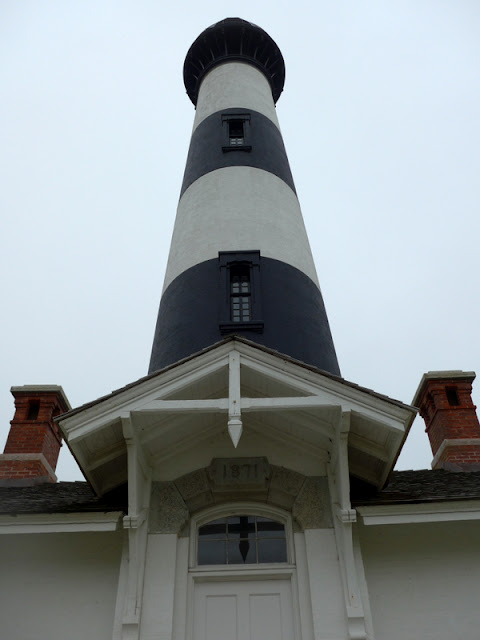 I jokingly asked Grandma if she remembered when this was built.

Last week Grandma was watching Chitty Chitty Bang Bang with the kids while I was at rehearsal (for the same musical, of course) and at the very beginning of the movie there's a sign for the 1908 Grand Prix and Rachel turned to Grandma and said, "Did you really dress like that back then?"

"How old do you think I am?!" Grandma asked.

Oh, children have no concept of time!

Later someone asked something about the Wright Brothers and what century they were in. Andrew said that they were in the 20th century and I said, "Well, I'm reading their biography right now and it definitely started in the 19th century, so..."

"You sound so smart saying, 'I'm reading their biography right now.' People are going to think you're reading an official biography or something when really it's written for second graders."

"Hey!" I said. "I'm reading it to Benjamin. And it's very informative."

Anyway, the Wright brothers were little boys when the Bodie Island was constructed (in case you needed that information for your mental timeline (some of us did)).

Here we are, trying to be happy in front of the Bodie Island Lighthouse. Windy, windy, windy! 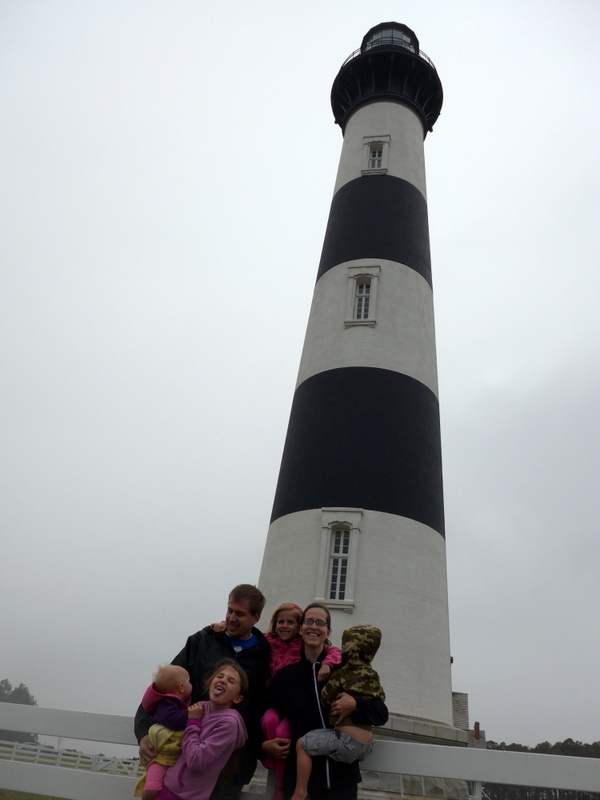 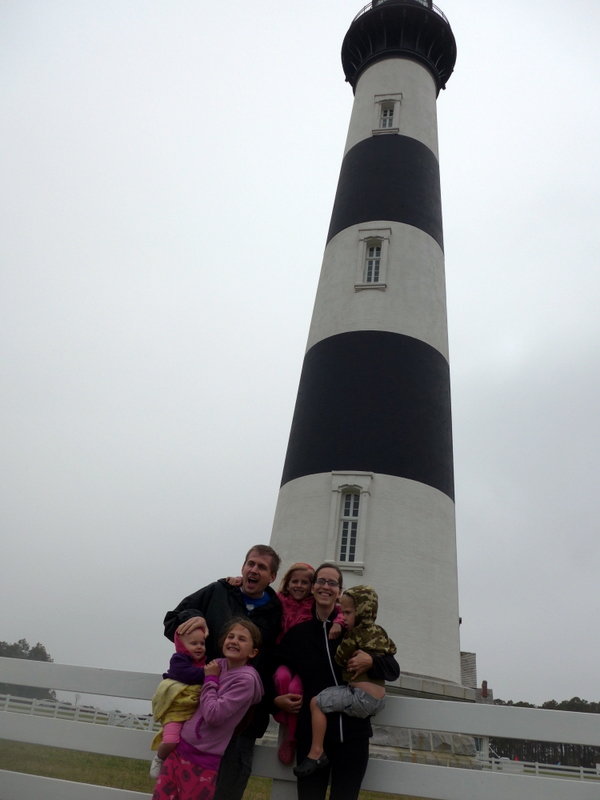 This third shot turned out...almost...the best. Poor Benjamin refused to put on pants before we left and then decided against his second sweater and left it in the van, so he was the most miserable little boy on the whole island, probably. He told me that he'd listen to my advice next time. Time will tell. 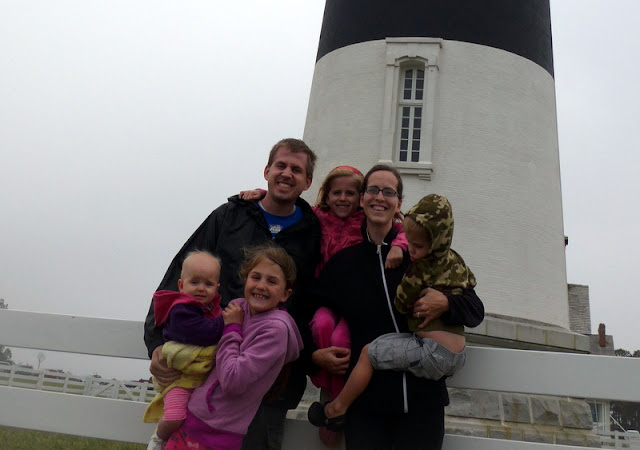 Here's Grandma and Grandpa in front of the lighthouse: 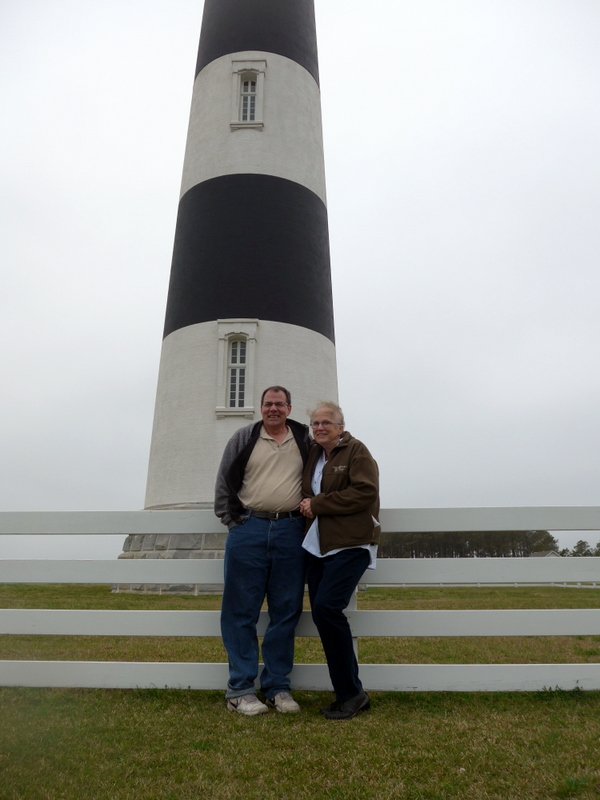 And here they are making fun of me: 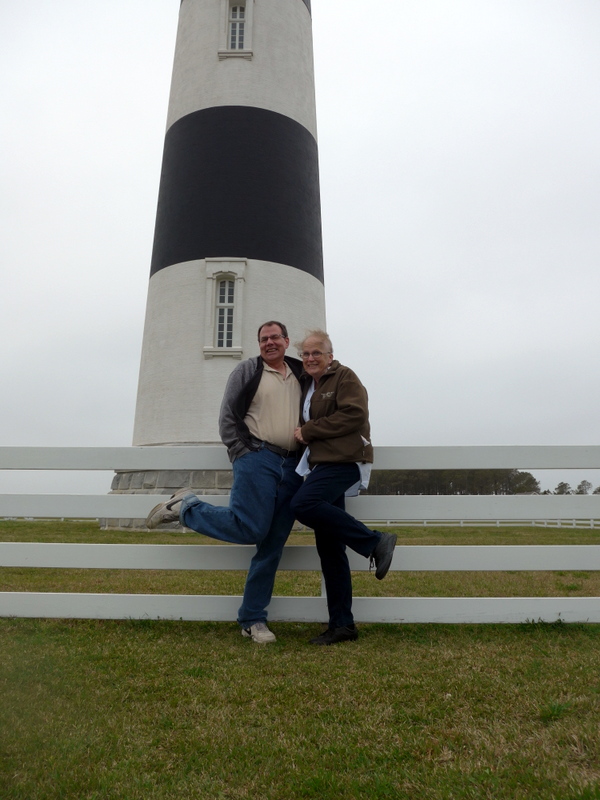 When Grandpa was taking our picture he said, "On the count of three everybody jump! One, two, three!" But I was holding Benjamin and helping Miriam balance on a fence post so I just kicked up one of my legs.

And here they are with their happy bunch of children: 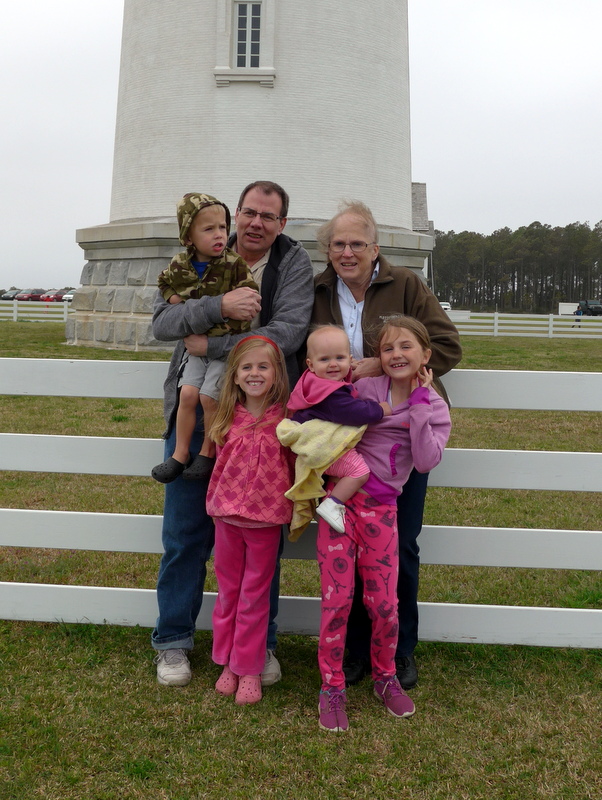 We ran up to a little lookout hut, but didn't see much or stay long--that wind! 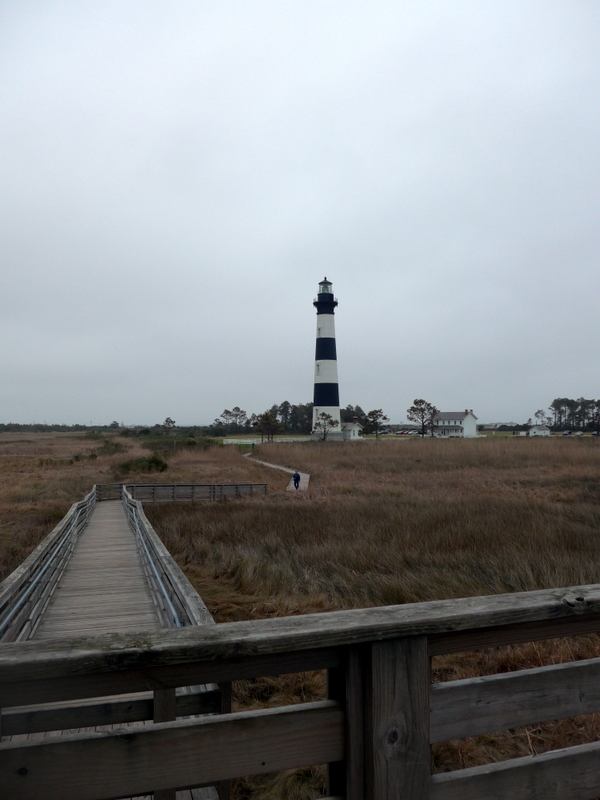 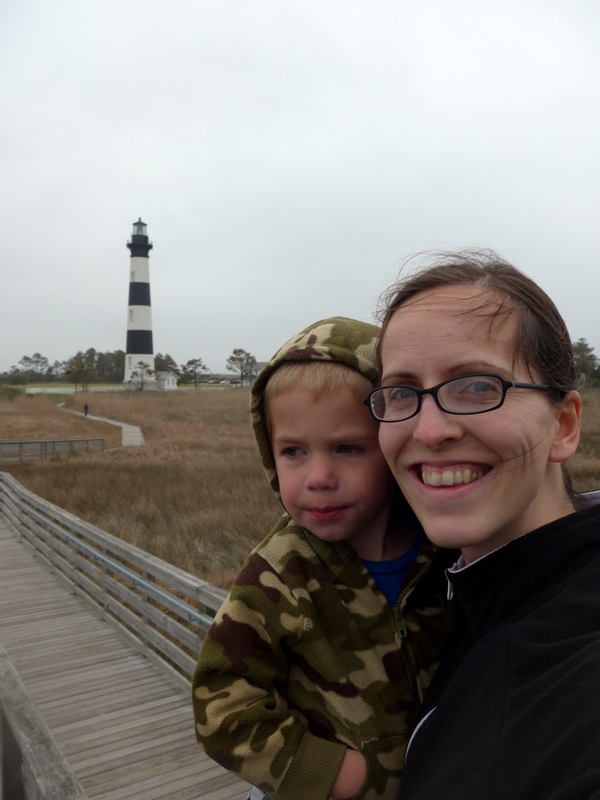 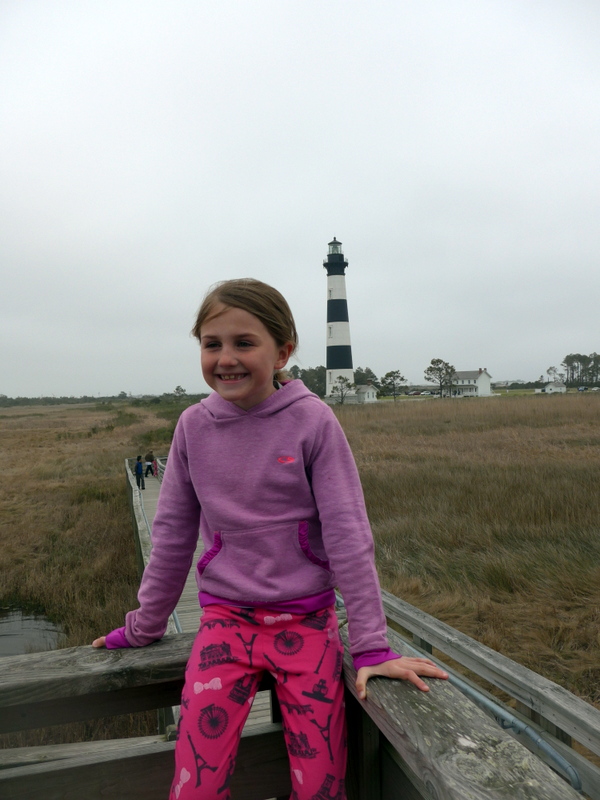 We all but raced back to the vehicles so we could get out of the wind and get warm. I gave Benjamin a piggyback ride. Miriam and Grandma raced ahead of everybody and won. Daddy and Zoë took a shortcut through the keeper's house (which is now a little gift shop) for a minute of respite on their way to the parking lot.

We were all certainly happy to get back to the beach house so we could be warm again!

By the way, were you saying Bodie Island with a long O sound the whole time you were reading this? Me, too. But apparently it's pronounced like "body."

I can't pronounce anything correctly out here: Appalachia. Bahama. Bodie.

What else is marking me as an outsider? Probably more than I'll ever know.
Posted by Nancy at 9:47 PM