I never wrote a post about how we did with our goals from last year (even though Andrew made me a nice pretty graph showing how we did not meet our walking goal) and I never formally declared my resolutions for this year either.

Part of me thinks that's because "keeping a baby alive" is a lofty enough goal but another part of me knows that it's kind of laziness. I've been thinking about goals. I just haven't formalized them.

One of the goals I was thinking of attempting this year was to do a service project every month. I had January and February covered with milk donations and I've been looking for other easy (ie. able to accomplish with limited funds and four children) service projects. I have a few up my sleeve for later in the year (ie. after the musical is over) and I'm totally going to count Trading Tables in April, but I didn't having anything planned for March.

At enrichment meeting last night we talked about scattering sunshine and tied fleece blankets for Project Linus. We didn't finish all the blankets, though, so I volunteered to take one home for the girls to help me with (not being sexist but ageist—I will welcome Benjamin's help tying fleece blankets in the future when he's older and less infuriating three). I cut the fringe last night after the kids got to bed (because of course they were all still awake when I got home) and Rachel and Miriam helped me tied the knots when they came home from school. 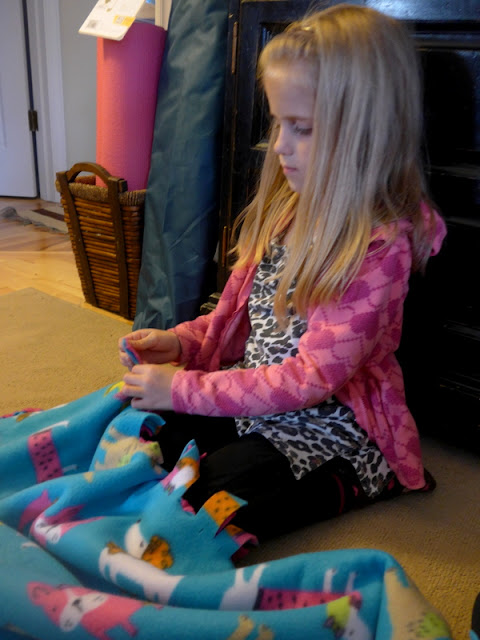 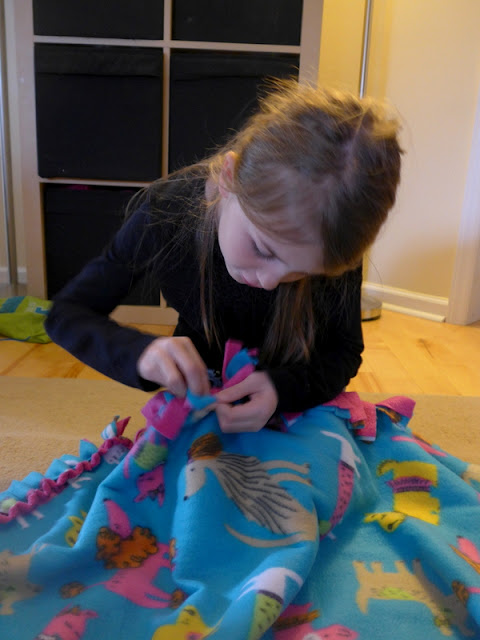 Maybe we'll manage to donate a few more blankets later in the year. Rachel's been trying to learn how to crochet and baby blankets don't take that long to make...
Posted by Nancy at 1:02 AM