The girls had their final choir concert Monday night (aside from, you know, the one next month, but that's only the show choir and it's at the high school) and it went great. They went with a Disney theme and sang a good mixture of classic Disney songs, as well as songs from newer movies, and even some songs I had never heard before. 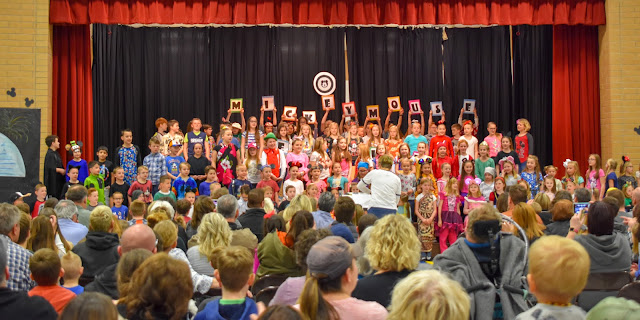 Miriam is on the righthand side of the stage in a green shirt and princess crown. Rachel is "somewhere in the back," as she put it. I have no idea where.


The Junior Choir sang first: Whistle While You Work and We Are Siamese seemed to be big hits, though they sang plenty of other songs (The Ugly Bug Ball? Don't think I'd ever heard that one before). Miriam's on the back row, green shirt: 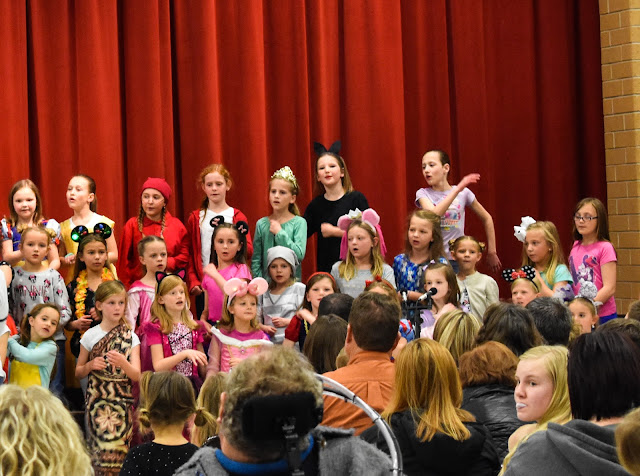 The Show Choir got a little more...showy. They sang a song from High School Musical (which I've never seen) and some of the kids, including Rachel, had pompoms to shake. Rachel is in the purple shirt, second from the right: 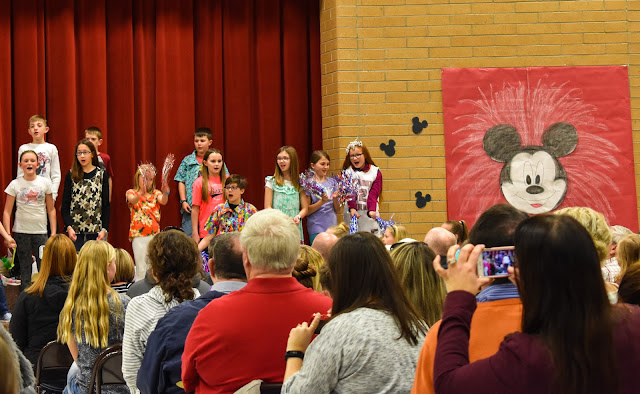 They sang Under the Sea, which Zoë has been singing ever since (though I don't think she's watched The Little Mermaid...but I should probably mention that last Monday Naanii took Rachel and Miriam to see The Little Mermaid at the Hale Center Theater, and they loved it). For that song they turned off the lights and shone a black light at the choir. Each one of the kids had made a fish, which they'd painted with neon paint so that it would glow under the black light. They waved them around as they sang, which was pretty cool.

They also sang Someone to Lava and had some of the choir accompany their singing on ukuleles. Rachel volunteered for that—so brave!

We're happy to say goodbye to early morning rehearsals (except, you know, for the few that Rachel still has for that concert next month)!
Posted by Nancy at 1:11 AM