DARE and The First Day of Spring

Here's my confession for the day: I was totally not planning on going to the DARE graduation. Like, I'd heard about it and everything but I didn't put in on my calendar because, well, I didn't. I guess it didn't seem like a huge deal in the big scheme of things.

Kind of like kindergarten graduation photos. I didn't order those either. So sue me.

But I did get up this morning to bedazzle Rachel, 1930s-style, for her first performance of Annie. She had to be at school at 8:30 this morning, so Andrew stuck around to herd the other children while I played makeup artist and hairdresser for Rachel (I don't know what we're going to do without him tomorrow morning). He drove her to school and then went to work and I finished getting Miriam and Benjamin out the door and then sat down to pump and check my email.

There was a general reminder from Rachel's teacher about the DARE graduation (ha—ignore!) but there was also a second email from her teacher that was just for me (so I read that one):

Just wanted to let you know that Rachel was selected as one of the winners for our D.A.R.E essays. Please do not tell her she will find out this afternoon. Hope to see you there :)

So then I had to go back to the email I'd just ignored to find out the details. Today at 2 PM. Completely doable. So after picking Benjamin up from school, having lunch, and then getting the kids ready to go again, we headed back to the school to watch the DARE graduation assembly.

We got excellent first row seats and seat-mates.

Another kindergarten mom sat behind me. She has a baby just a couple of weeks younger than Alexander and those two baby boys chatted and giggled with each other through the whole assembly, which lasted an hour and had me really regretting attending with three little ones in tow.

But the mom sitting beside me was such a great help. I have no idea who she is but when she noticed me trying to juggle Zoë and Alexander and the camera she said, "Can I hold your baby for a little while so you can take pictures? I don't have any little buddies at my house anymore." Then she turned on her baby voice for Alexander and said, "All my widdle buddies are all grown up, yes they are!"

So she held Alexander and I convinced Zoë to sit on her own (Benjamin, who has had a hankering for some math homework the past few days, was in his own little world, sprawled out on the floor with a math workbook and a pencil) while I snapped a few pictures of Rachel.

She was quite surprised when her name was called, but she bravely stood up, retrieved her paper from her teacher, and read it in front of everyone with a clear, unwavering voice. Like a boss. 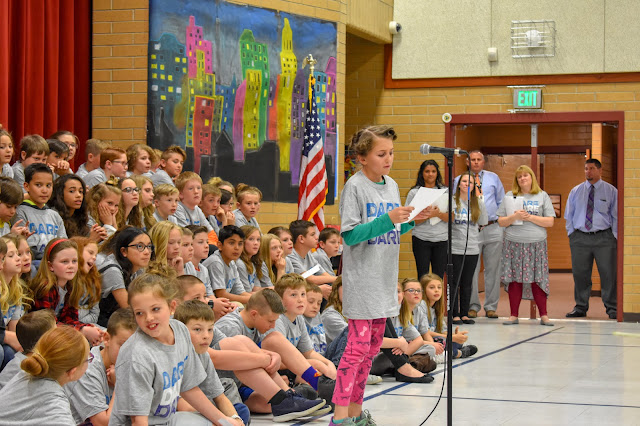 She did so awesome! The effectiveness of DARE programs have come under scrutiny in recent years (because studies have shown that they're largely ineffective) but the kids seem to have had a good time and Rachel seemed well-versed in the ills of peer pressure and mood-altering substances. 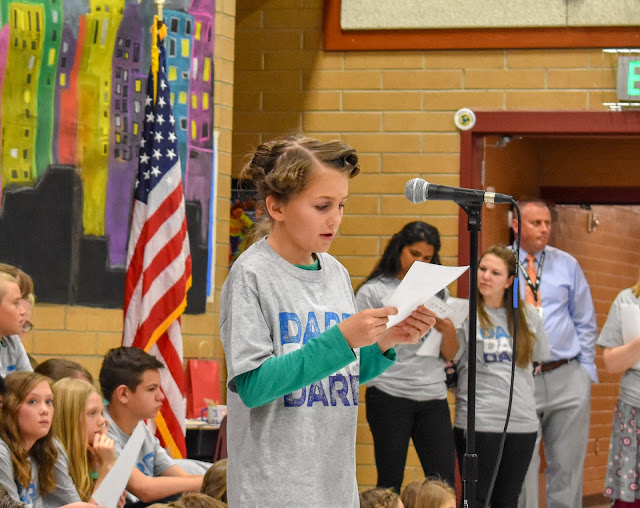 In this paper, you'll learn about the effects that alcohol and tobacco can have on a body that we learned in DARE. First, you'll need to know what DARE stands for. DARE stands for Drug Abuse Resistance Education. You'll also need to know what a drug is. A drug is any substance other than food that affect the way the mind and body work. Alcohol and tobacco are drugs because they affect the way your mind and body work. We had a fun time in DARE this year. I hope you will learn a lot reading what we learned about.

First, I'll tell you about alcohol. Too much alcohol can slow down the body and cause coma and death. Alcohol goes right into the bloodstream and can damage every organ in the body. Alcohol can lead to loss of coordination, poor judgement, memory loss, loss of self control, and slow reflexes. There are 75,000 deaths related to alcohol each year in the US alone, which is why it is illegal for anyone under 21. Also, alcohol affects teens and kids more severely than adults, which is also why it is illegal for anyone under 21. You know how I told you how alcohol can lead to lack of coordination, right? Well, we got to experience that ourselves, not by drinking, but by trying on drunk goggles. We had to go around a simple obstacle course, but all of us failed because of the goggles. That just proves how alcohol affects the body. Lastly, Officer Dewitt told us a story about an 11 or 12 year old girl. She had gone to a party her mom had told her specifically not to go to. She got drunk, and ended up in the gutter with four inches of snow on top of her, unconscious. This story taught me two lessons (probably more). First, obey your mother.* Second, don't drink.

Did you know that in the US, it is illegal to sell alcohol to anyone under 18? Well, it is. In some states, the maximum age can even go up to 19.** Did you know that there are more than 200 known harmful chemicals in tobacco? Cigarettes also contain nicotine, which is a powerfully addictive substance. Nicotine reduces the amount of blood that flows to the brain, which can be harmful. Smoking can cause mouth cancer, lung caner, heart disease, tooth loss, yellow teeth, bad breath, and wrinkles. And, more than 400,000 people in America each year die from tobacco related causes.

In conclusion, I learned a lot in DARE! We learned the dangers of alcohol and tobacco (and drugs). We got to try on drunk goggles and see police dogs. Overall, DARE was a great learning experience.

She was quite relieved when she was able to sit down. This is the look she shot me:

At the end of the assembly they invited us to check our kids out from school. I had been planning on taking the little kids to the playground for a little while so I asked Rachel what she wanted to do—go back to class or ditch the last half hour of school and come to the park with us. She's basically been living at the school lately (rehearsal, rehearsal, rehearsal) so I wasn't surprised when she said she'd like to be checked out.

And then we went ahead and checked Miriam out, too, because we're renegades like that (and because it seemed, from my observations in the check-out line, to be the thing to do—all the other moms were asking to have their other kids called down to the office—peer pressure...what?—*shrug*). Besides, it's the first day of spring—Happy Nowruz, the Persian New Year! It's quite fitting, I think, to celebrate the turn of a new year in the spring when everything's legitimately new (January's a lie; nothing's new in January).

We celebrated by playing at the park for two hours after school (well, the older kids did, at least; I took the little ones home for nap time (or "show time" for my non-napper) after a while because Utah just passed a free-range parenting law that says I can leave my kids playing at the park unattended (because apparently we needed a law for that (we'd like to thank you Gov'ner Hoover (just kidding; I know it's Gary Herbert but because of Annie I can't call him that and instead I call him Hoover))))).

Here's Rachel looking into the new year after taking out her pin curls: 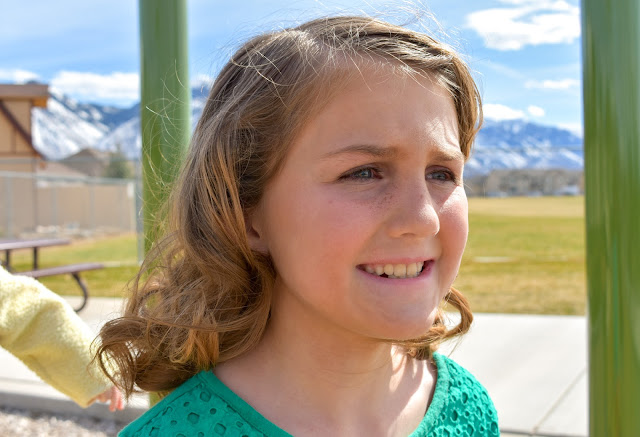 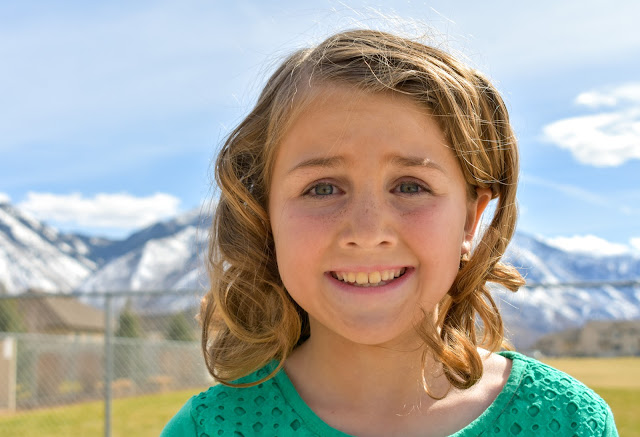 She took a package of baby wipes to school so she could scrub all the stage makeup off her face. (That's my girl!)

Perhaps if the weather's this nice on April 9th I will pull the kids out of school to celebrate Sham Ennessim (Smell the Breeze/Zephyr Day in Egypt, marking the beginning of spring).

Just kidding. I know that their spring break is only one week long—spanning the first week of April—so the 9th will be their first day back at school. Therefore I am fully prepared to and am planning on sending them to school that day (like a good little parent (who is completely on top of calendaring her life)) and won't make any other crazy school-skipping plans (like the accidental encore to their winter break).

They'll just have to sniff the breeze during recess that day. Sorry (not sorry) kids!
Posted by Nancy at 1:17 AM