Do you wanna build a snowman?

Since it last snowed on us (last Friday) the weather had been warm enough to melt off nearly everything we got (and we got quite a bit). Yesterday afternoon we went to the park with Naanii and Zoë ran around barefoot (avoid patches of snow), Benjamin wore shorts, and Rachel and Miriam kept taking their sweaters on and off. And when we got home we made Benjamin go into the backyard to collect all the flotsam the melting snow had been hiding: an orange bowl, a frisbee, some boards for the porch swing, and several other things.

And then last night it snowed once again—and quite a bit, too!

We knew it was coming. The winter storm advisory had been in the forecast for about a week. Still, it was hard to believe that a storm actually was coming because yesterday had been so balmy. But we woke up to a good eight inches of snow—and then it kept on snowing for four or five more hours!

Some wards in our area met for sacrament meeting only and then went home to help shovel out the neighbourhood. Other wards in the area cancelled church altogether (areas closer to the mountain really got pounded). Our ward met for all three hours (and then went home to shovel, although some of us shovelled before church (some of us had 5 AM skype meetings so had plenty of time on our hands before church (ahem, Andrew)).

After choir practice, I took the kids outside to play in the snow. It was perfect snow for building a snowman, which I was happy about because the last time we had snow good enough for a snowman was at Christmas (and Andrew took the kids out to build a snowman because Alexander was still so new and I was still so just-had-a-baby, and we forgot to take a picture of it)! We haven't managed to build a snowman since then. Until today.

Andrew had been napping (see above for the reason why) but he joined us when we had reached a crucial part in our snowman building process. We'd rolled two ginormous snowballs but had no idea how we were going to get them on top of each other (they were just that big). 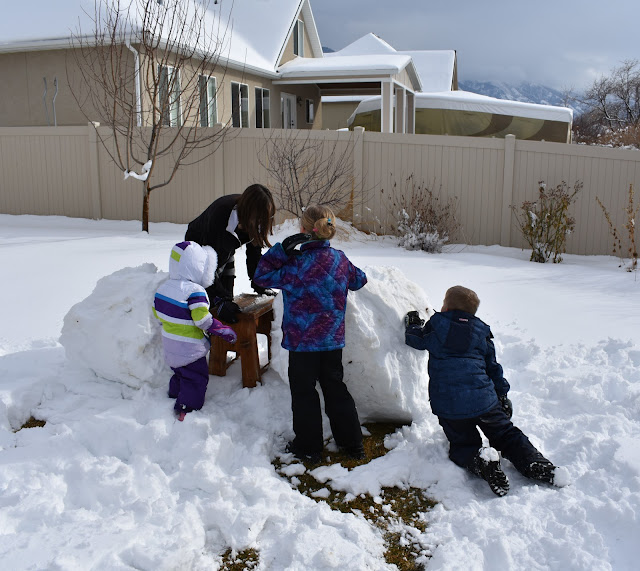 We figured we could lift the smaller snowball onto the stool and from there lift it onto the bigger snowball, but then Andrew came outside and suggested we go even bigger. So we did. 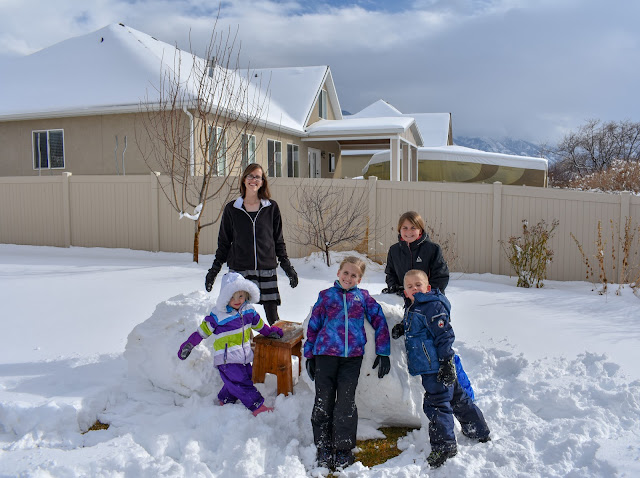 We ended up jabbing the stool into the base of our snowman and rolling the second ball up the stool and on top of the the first ball. There was a lot of grunting involved, but we did it! We used brooms for his arms, a banana for his nose, some big crackers for his eyes, and lollipops for his ears.

Here's a picture of me with the oldest three and our snowman: 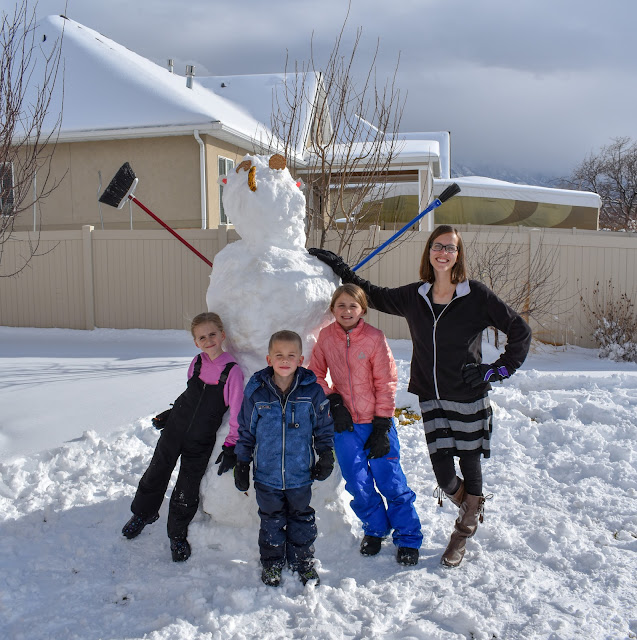 And here's a picture of Andrew with the same: 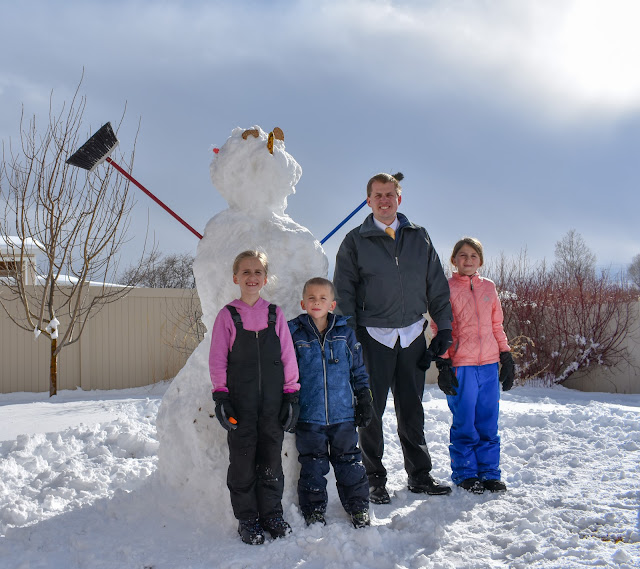 Zoë had gone back inside by this point but I dragged her back outside for a photo (along with Baby Ander) because, as I told her, she might not want to have her picture taken with the snowman today but when she's five years old she'll probably regret it and ask why she didn't get a picture by The Big Snowman of 2018. 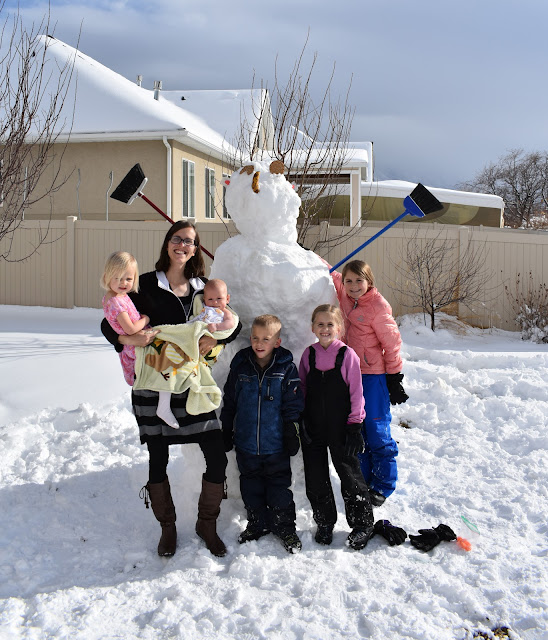 Alexander may or may not have any clothes on (he was so spitty-uppy today; he drenched Grandma at church and, well, I'm basically resigned to being a walking burp cloth) but don't worry because it wasn't terribly cold outside (plus we wrapped him in a blanket, so that scores us some "good parent" points, right?).

Grandpa came outside to take a picture of all of us together: 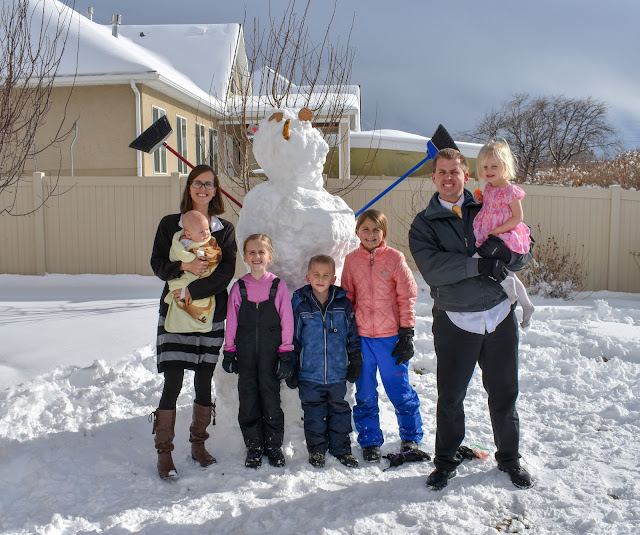 We sent Daddy inside with the babies and then the big kids and I built a snow ramp. They tried using a sled with it but found it too difficult to climb on the sled before it started going down the hill without them (poor design on our part). 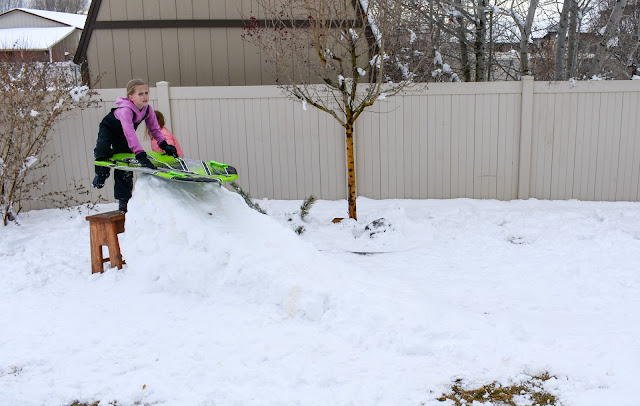 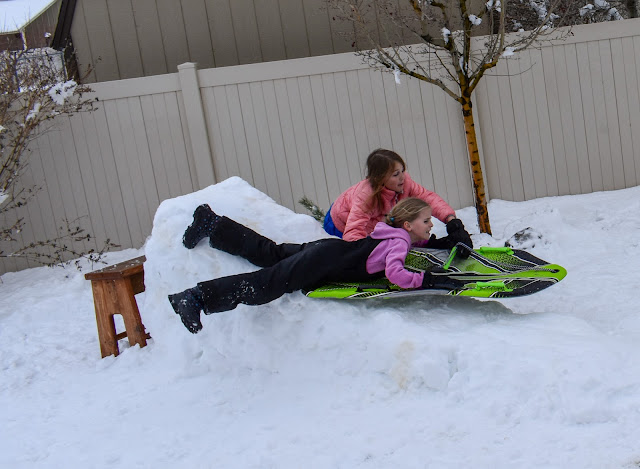 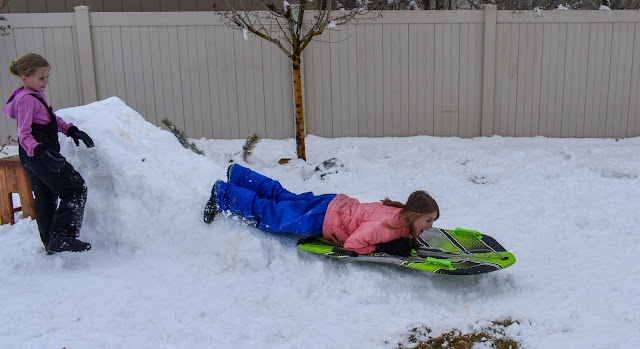 Instead they took turns rolling and sliding down the hill as creatively as possible. 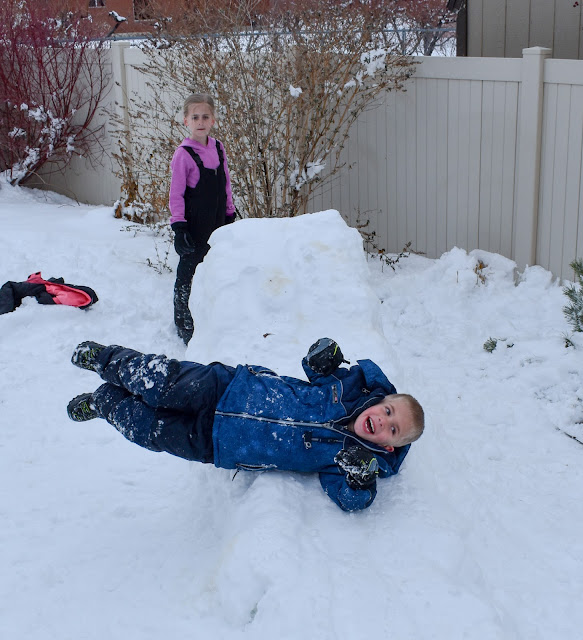 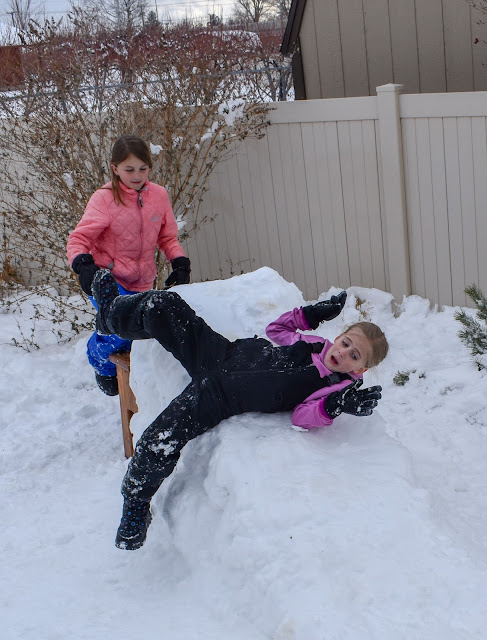 Benjamin was really the best at this, I think because his body was proportionally just the right size for this hill (while his big sisters were just a tad too big). 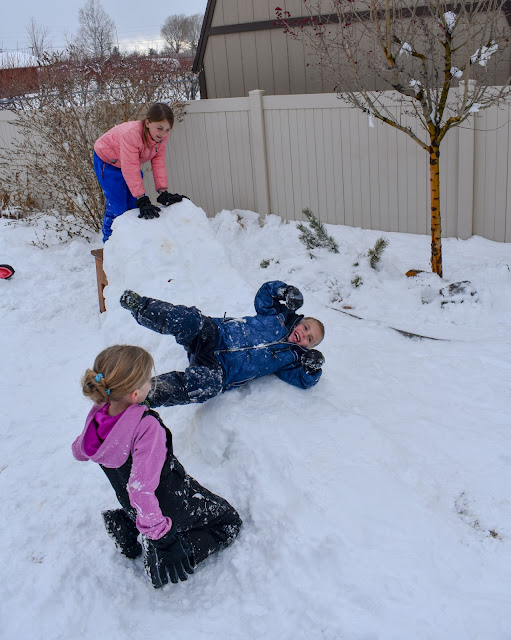 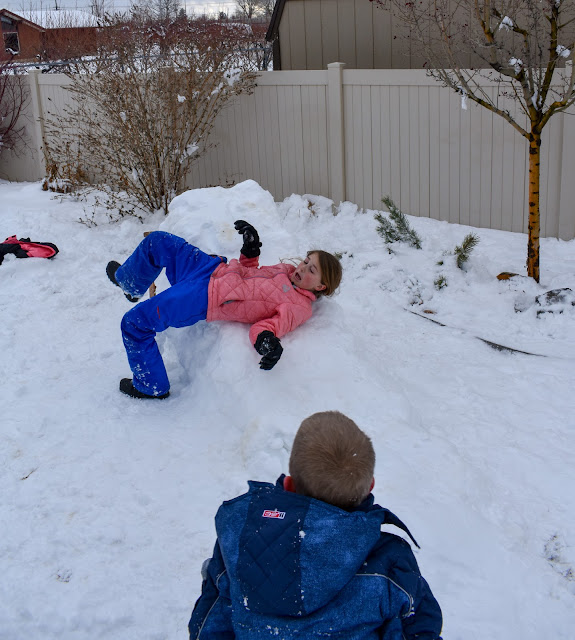 Soon Benjamin decided to head back inside, but Zoë, who had been watching the kids play together, decided that she wanted to go out and try our snow slide, too. So here are a few several pictures of our three girls playing together: 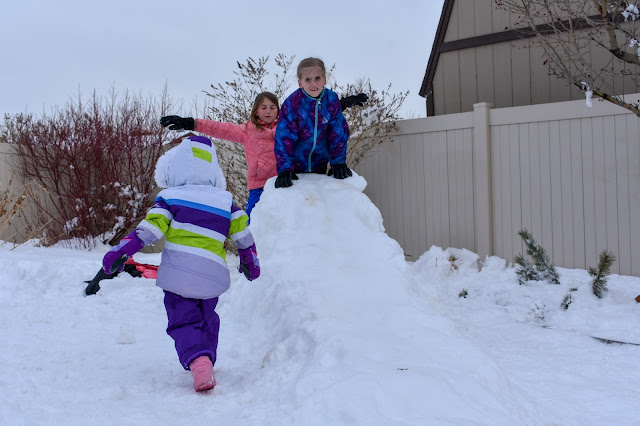 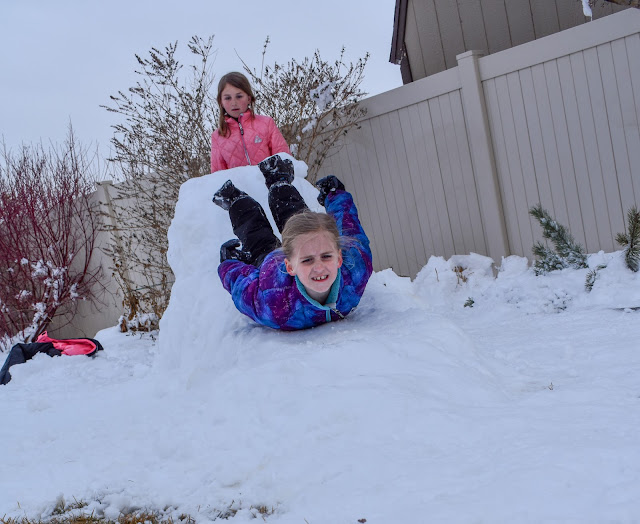 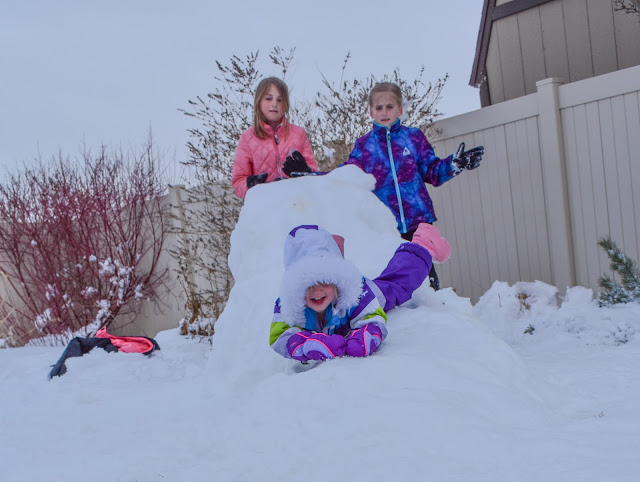 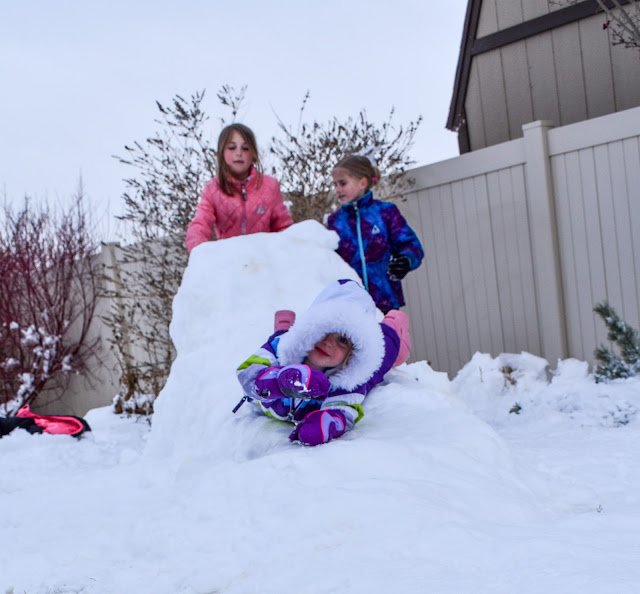 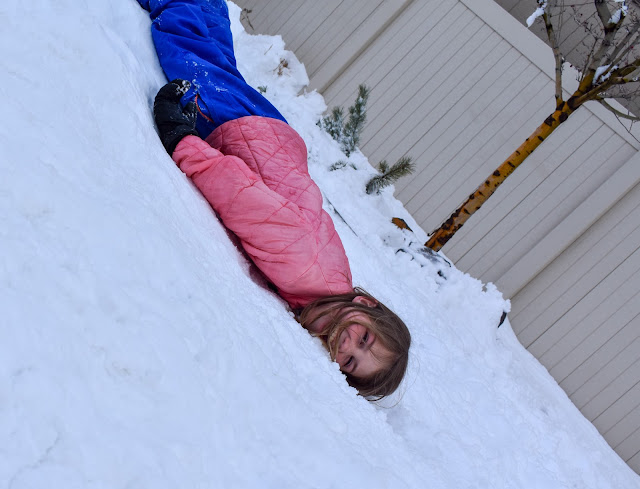 Right before we came in for good (it cooled down fast once the sun set!), Rachel had Zoë use her as a sled, which was pretty funny: 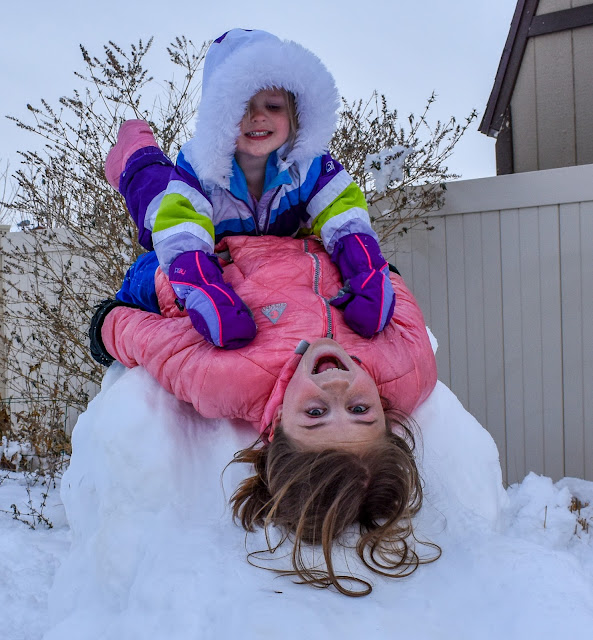 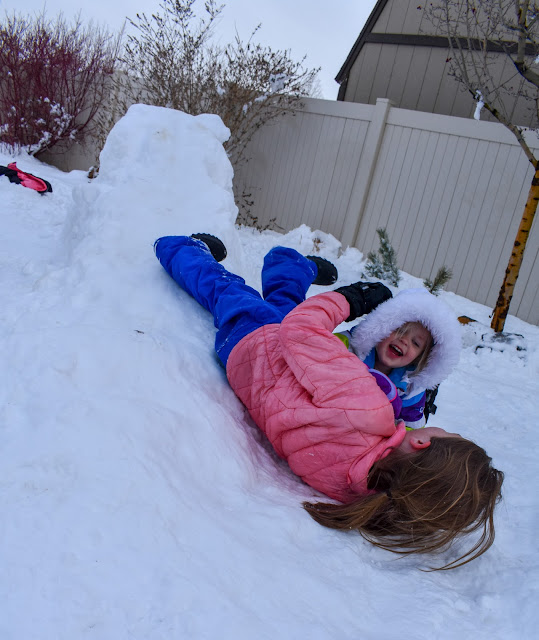 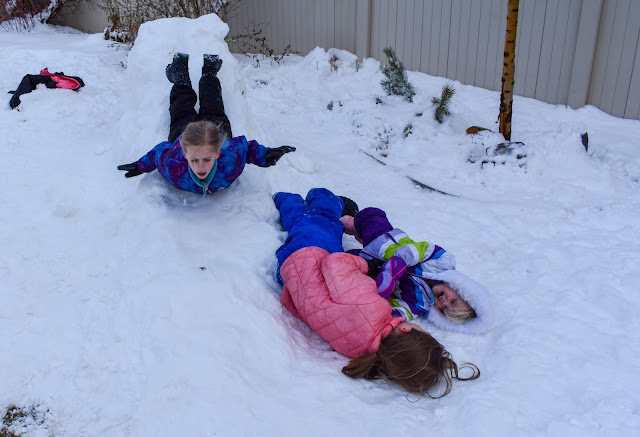 To give you an idea of how deep the snow was, here I am in some untrampled snow at the side of the house, where the snow was about a foot deep (if not more), wearing my nearly-knee-high boots: 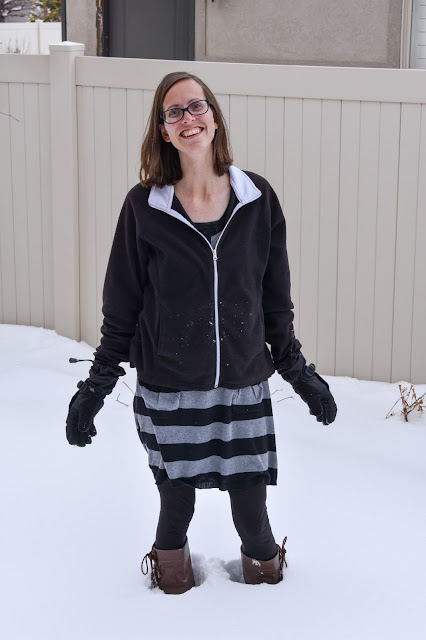 Granted, it does tend to drift here a bit (we guess we got about eight inches, officially (or at least as officially as a guess can get)). 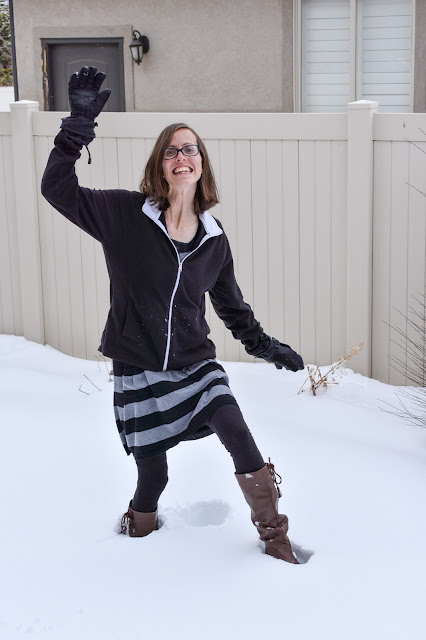 It looks like things are going to warm up quite a bit next week, so I don't expect this snow will stick around much longer, which is the great part about March snows! Unlike January snows, which sit on the ground for weeks, March snows are typically gone within a couple of days. Spring is on its way!
Posted by Nancy at 11:26 PM