This evening we dropped the four big kids off at my sister Josie's house and enjoyed an evening out—with the baby in tow—at the MPA awards banquet. In complete contrast with our last MPA banquet (in 2012), Andrew only had to get out of his seat once. And that was to bounce the baby, not to accept any (or all) awards. But it was fine that way.

It's still rather surreal being "on the other side" of things.

Dr. Heiss sometimes doesn't respond to that title because, well, he's not very used to it. Some students clearly adore him, others not so much, but that's the way it is with teaching. We sat at a table with one of his TAs and a handful of students from Andrew's classes, who all seemed to like him, so that was nice. I was a little jealous that they all knew exactly what they would be doing next year (two will be starting PhD programs and three will be finishing up their MPA degrees and one will be a trailing spouse for one of the PhD students) while we're still flapping around in the breeze.

Dinner was a little awkward. We haven't been to any formal banquets recently and have apparently been out of Mormondom so long (living, as we were, in "the mission field") that when we were invited into the banquet hall and found our seats and salads, we dug in. Our entire table did. I mean, first we talked about etiquette (wait for your entire party to be seated and served) and found our salad forks (work your way outwards in, right?), and then we figured we could just go for it.


Slowly we realized that ours was the only table eating. Everyone else was patiently waiting. For what...?

Oh, the opening prayer and blessing on the food.

Oops. Appetizers had already been served downstairs...so...obviously eating before praying wasn't a strict no-no. Where is the line in the sand?!?!?

"I said a prayer in my heart..." the student beside me mused, digging in.

By the time the food had been blessed our table had mostly finished with our salads. But then, somewhat ironically, we were the last table to be served the entrée! Other tables were working on dessert by the time we were served!

We joked it was our punishment for eating before the prayer.

But probably it wasn't. After all, we'd said prayers in our hearts.

"I prayed this morning over all the food I'd consume today," another student at our table offered.

"January 1st, I pray for all the food I'll eat all year," Andrew said.

We were totally covered.

So maybe they served us last because our table was #13. Whatever the case, the meal was good.

Poor Alexander is getting aggressively interested in food. He's five months old now so I suppose it's about time that he became interested in food, but starting solids is always difficult for me, emotionally, and this time around exceptionally so. So, sorry, Alexander—I'm going to need another month of exclusively breastfeeding (or at least a couple of weeks).

The speaker was interesting, though I only got to hear part of her speech because Alexander had a poorly-timed, excessively loud poopy diaper in the middle of it. And in my attempt to find a washroom I somehow wandered into a long hallway full of suits—dry-clean-only suits!

That's the stuff of nightmares for any mother of a child with severe reflux!

Speaking of restrooms, we made a pit stop at the Tanner Building before heading over to the Hinckley Building for the banquet. I used what must be the smallest restroom on campus—two little stalls, that's all. I was quite surprised to find such a small bathroom but was even more surprised when I couldn't find my way back out!

I washed my hands, walked over to the paper towel dispenser (which put the door to my back) and then walked into a (very) little lounge. It was momentarily disorienting that I couldn't find the door and I was glad there was no one to witness my confusion because, as I said, it was the world's tiniest bathroom!

Anyway, here's a picture of Alexander and Andrew at the banquet: 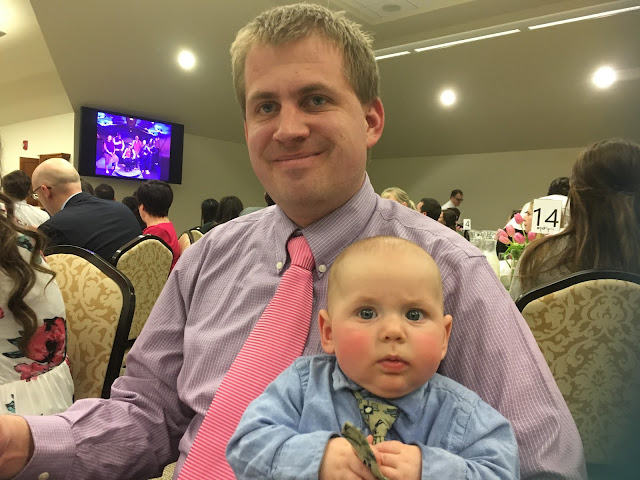 Oh, during the "mingle" portion of the evening, Andrew and I sat down in some chairs and were joined by the person they passed Andrew over to hire for the permanent position (it was nothing personal; they just were told by administration that they had to hire someone in finance, not policy, so here we are). He was super nice.

He asked us a lot about Duke and Durham and told us a lot about his family's time in Louisiana. He told us that graduate school is so different from future employment because where you go to school becomes a part of you in a way that where you're employed never will. Jobs come and go, but you'll always have your alma mater.

I suppose there is truth in that and I'm sure we'll find deeper truth in it down the road.

Recently I've had the words of Lead, Kindly Light running through my head and I've been wondering at how John Henry Newman got to the point where he didn't need to see the distant scene. Is one step really enough to go on? Because I need two or three to feel really comfortable. Or perhaps I feel so uncomfortable right now because our foot is hovering in midair but we can't see the next foothold yet. We don't have one step. We're getting ready to trip in the dark.

Near existential crisis aside, it was good to have a night out.
Posted by Nancy at 9:27 PM