I wanna hold your hand

Yesterday Auntie Emily arrived with her youngest and oldest in tow. Benjamin and Zoë have been so excited to play with Gavin! I think they overwhelm him a little bit (they fight over him, literally tugging him in opposite directions (no matter how much I've tried to convince them to stop)). Zoë always wants to hold Gavin's hand—going up the stairs, going down the stairs, going into the backyard, just because they're both standing there.

We went to Rachel's play last night and Zoë insisted on holding Gavin's hand as we walked to the school (from the parking lot; we drove because I told my mom we'd meet her at the school at 6:20 and we didn't leave the house until, like, 6:17). Things were fine until we made it to the school doors. 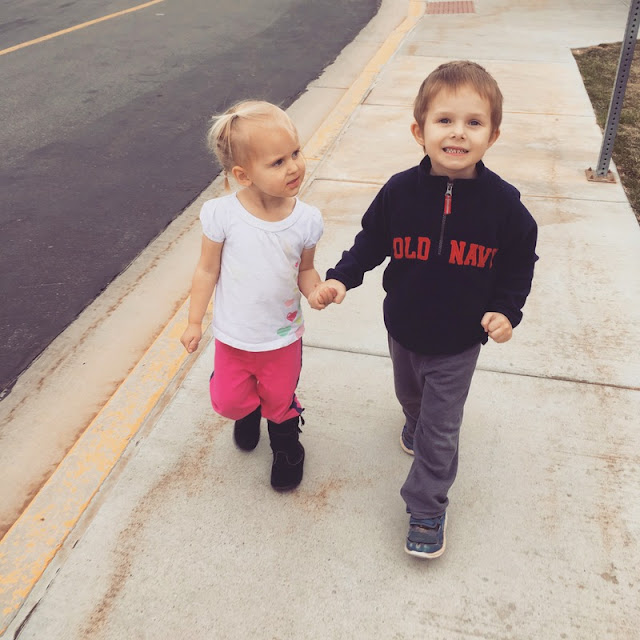 Benjamin held the door open for them, Gavin walked inside, and Zoë blindly followed his lead, completely unaware that he was leading her right into the open door. Of course, he hadn't meant to do this (and she really should have been paying attention), and, unfortunately, I only noticed what was going to happen when it was a too late to prevent the collision.

"Zoë..." was all I managed to say before she smacked into the door. She ricocheted backwards, the force of which caused her to break her grasp on Gavin's hand, and she landed on her bottom.

I honestly think she was more upset that Gavin let go of her hand than she was about bonking her head! Gavin quickly apologized and gave her a hug and the two of them walked off holding hands again (hopefully paying a little more attention to their surroundings).
Posted by Nancy at 1:40 AM