A little over 10.5 years ago, we went on a family outing up South Fork Canyon. You currently can't see any pictures of that outing because once upon a time Facebook had external links for its photos that I could use on Blogger but those links are all dead now (maybe I will fix that later). I still have the pictures on my hard drive, * however, so I pulled them up so you could see how much has changed in the past ten years and how much has stayed the same. 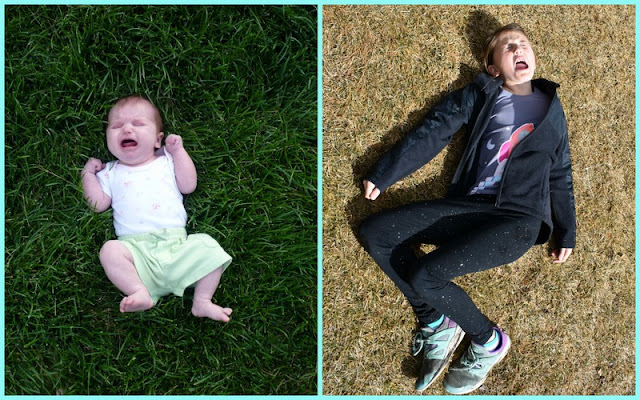 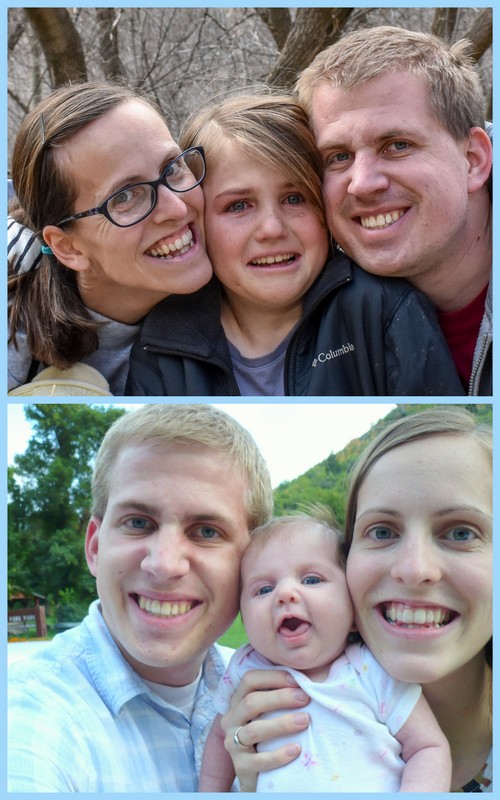 For some reason she trusts us less now than she did when she was six weeks old. She was afraid we were going to play a prank on her (in the top picture, where she's crying...not because we played a prank on her but because she'd just tried running down a wet, muddy hill, slipped, and landed flat on her "everything," as she put it—head, back, butt, you name it). I don't know why she'd think we were going to play a prank on her. We're actually very nice people. It's like she hasn't bothered to get to know us at all these past ten years (sheesh, Rachel). 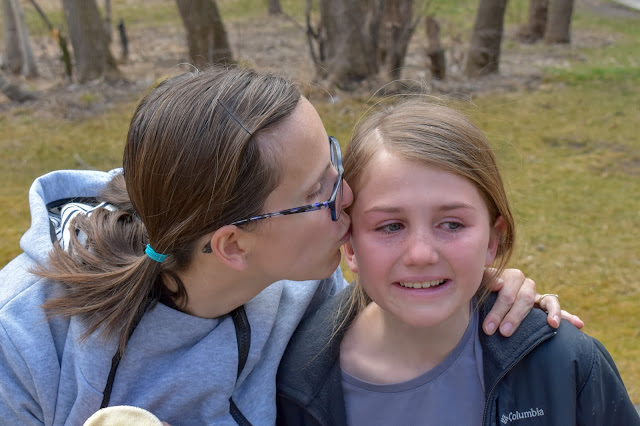 Anyway, heading to South Fork Canyon was a bit of an accident. Our original plan, such as it was, was to take the kids to see Bridal Veil Falls. We've been completely remiss in taking our kids out on Utah adventures (baby + winter = hibernation) and I realized this morning that they have never gone up Provo Canyon since moving here. Unfortunately, the trail to Bridal Veil Falls was closed due to undisclosed "danger" (seriously—the sign said "trail closed due to danger") and since the majority of our children read now, we couldn't very well disregard the sign (because we're genuinely nice people and that would have been setting a terrible example, right children?).

I think, maybe, the trail is still under construction. I remember that it was in the summer. Like, it was supposed to be open for Memorial Day but then it was under construction again or still when we moved here in August. And I frankly don't know if they're finished or if the trail is just closed for the winter.

Luckily, as I pointed out to the children, the mountains are huge so there are plenty of alternate locations to explore. Andrew picked South Fork, so South Fork it was.

Benjamin found driving through the canyon to be rather intimidating, and I remember feeling similarly at his age—these massive walls of rock looming on either side of the highway, threatening to come crashing down upon you at any given moment. All the avalanche warning signs don't help either.

He was pretty excited when we got out at the park. All the kids were, actually. They had icky tummies from the winding drive (which wasn't even that far up the mountain) and all complained about it when we parked. I assured them that the cool, fresh air and good romp in the woods would fix their tummy aches (and it did).

Here's Benjamin, our intrepid explorer, posing by the river: 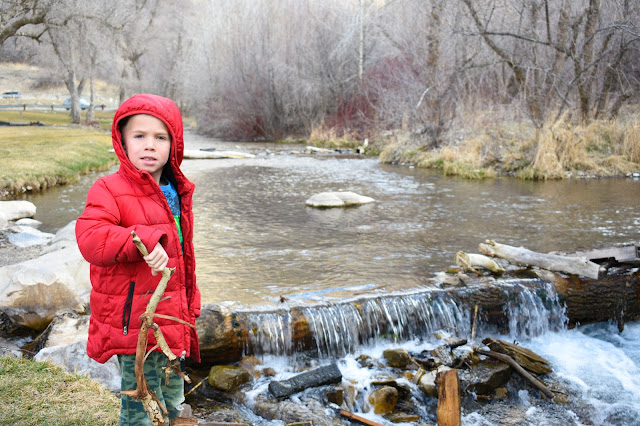 We told the kids not to get in the water because it's all runoff, so it's always freezing cold and it's not exactly summer yet...but he kept wading in it anyway (crazy kid).

Here's brave Miriam climbing up the mountain, following the course of a little runoff stream: 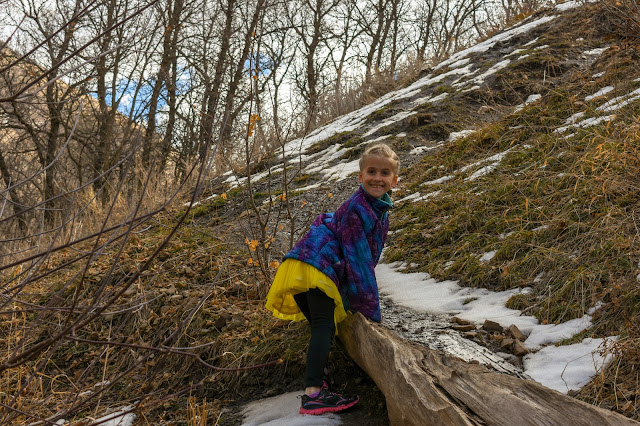 And here we all are following her: 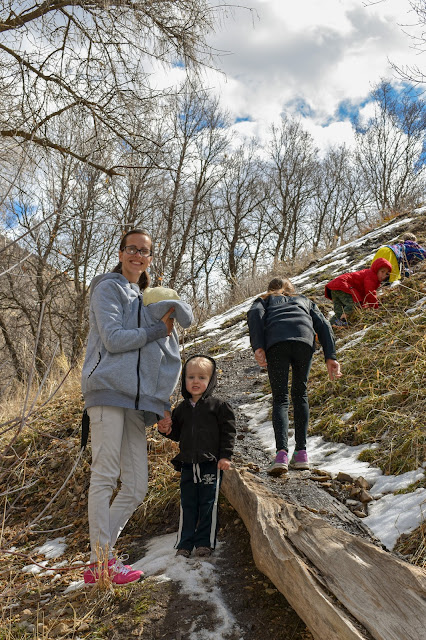 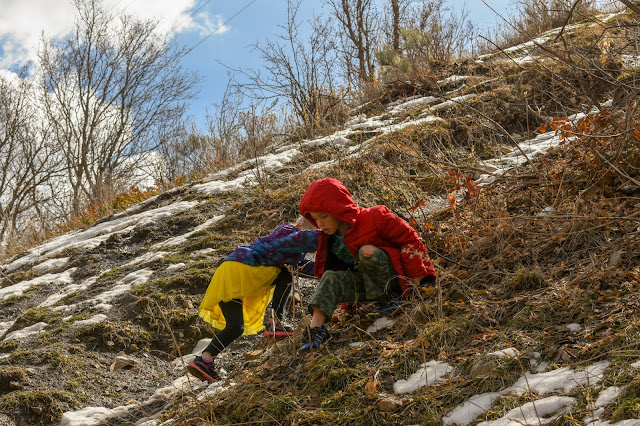 Eventually she forged so far onward that her bravery wore out and she sat there and cried until Daddy came to rescue her (he's a good Daddy): 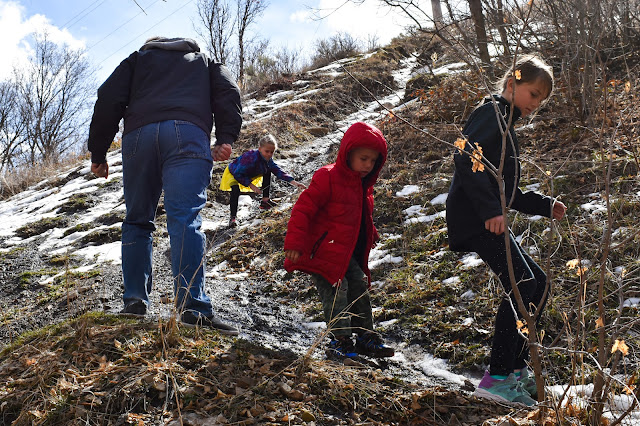 He's showing her how to brace herself by going down the slope sideways, to which she (literally) said, "No, thanks," and kept going straight down (crazy kid): 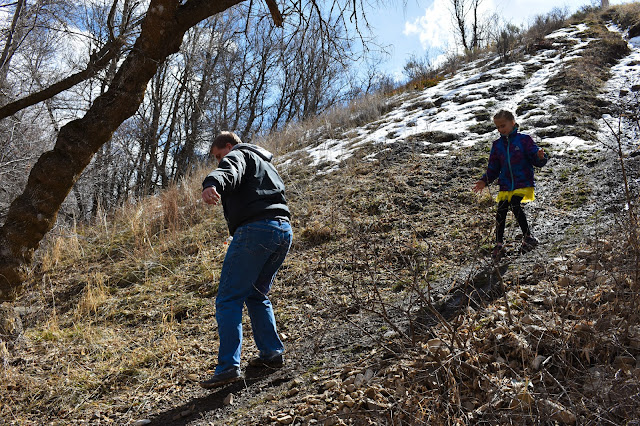 Here's Rachel out on a little island in the middle of the river/stream/whatever: 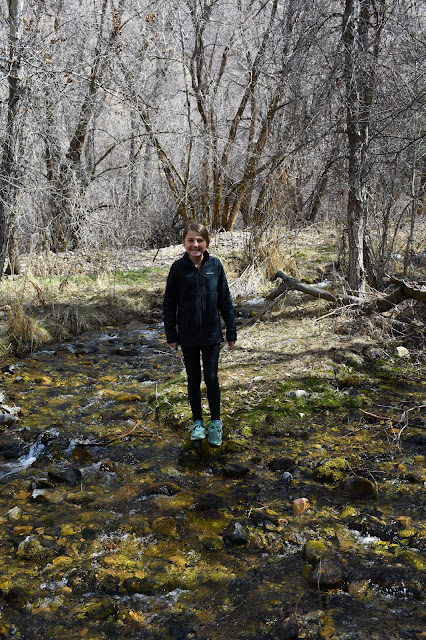 And here's Zoë beside the same body of water: 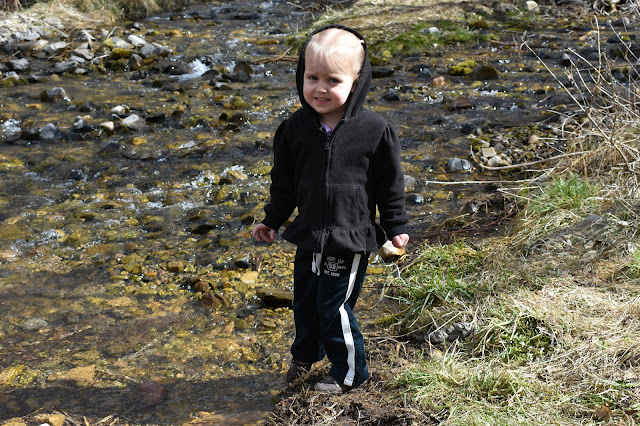 And here's everyone, excepting Andrew and including Alexander, who napped the entire time we were at the park because that's what he does in the front carrier; it's like he can't even help himself. He falls asleep within minutes of getting in the carrier. I honestly don't know if it's because he loves how cozy it is or if he hates it and is trying to pretend it's not happening: 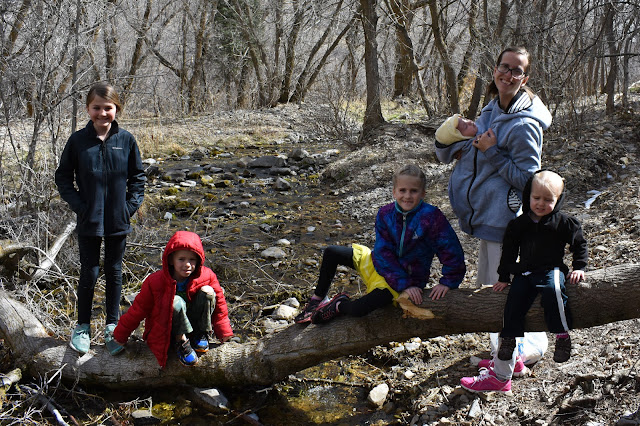 Here's Zoë and Benjamin up on a hill: 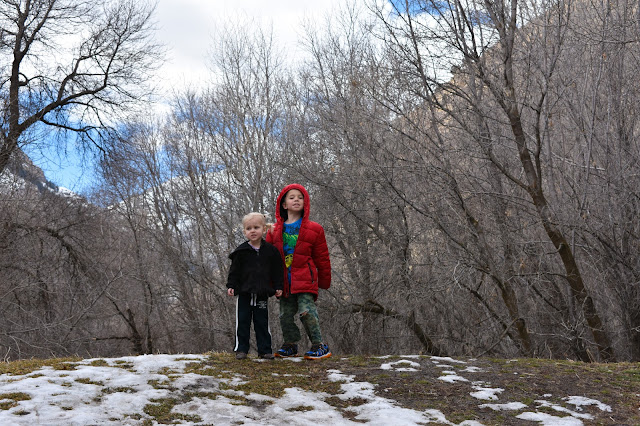 Here's Rachel and Miriam shimmying their way up a fallen tree: 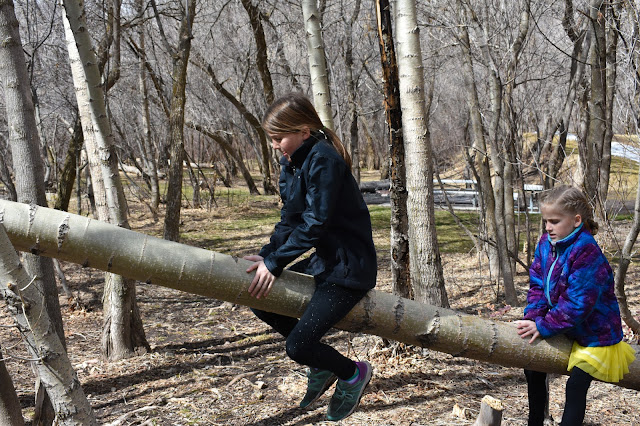 It looked like so much fun that Zoë decided to follow them. And then because she was there, we decided we should plop Benjamin down between them so the kids would be in birth order. Unfortunately, Benjamin was the straw that broke the camel's back, because while the tree seemed stable enough when all three girls were climbing on it, as soon as Andrew set Benjamin down the tree gave way a bit and settled a few inches closer to the ground. It completely freaked the children out. All four of them started wailing: 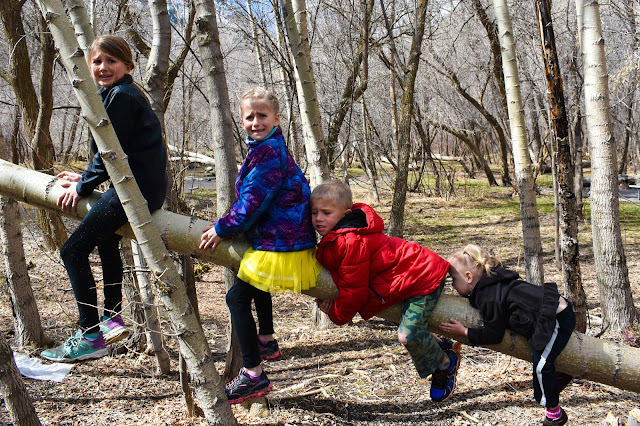 But then Rachel spotted a drone that some people across the river were flying. That helped her recover but the younger three were still not amused and kept crying to be lifted off the tree: 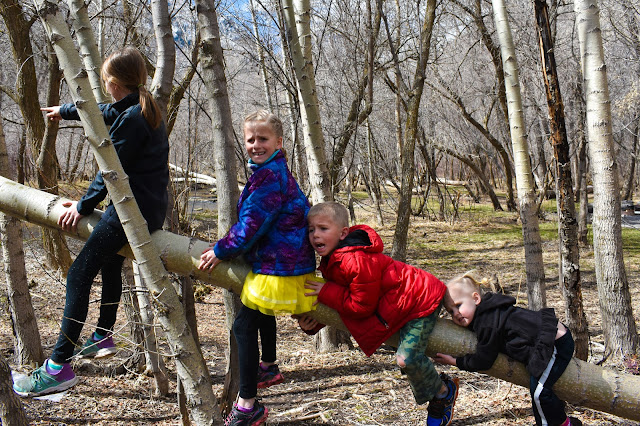 While we were walking around we found an empty grocery bag—what a find!—so we started filling it with trash as we hiked along. Plogging (or, in our case, pliking...I guess) is the latest trend, you know. While we were looking for trash we found a good-as-new, still-neatly-folded, factory-setting garbage bag—of all the luck!—so we decided to fill that, too. I suppose if we were real ploggers we'd have brought our own trash bags, but garbage bags seem to come to us when we need them most so we're in good hands.

Here's me (and Alexander) and Miriam with our collected goods: 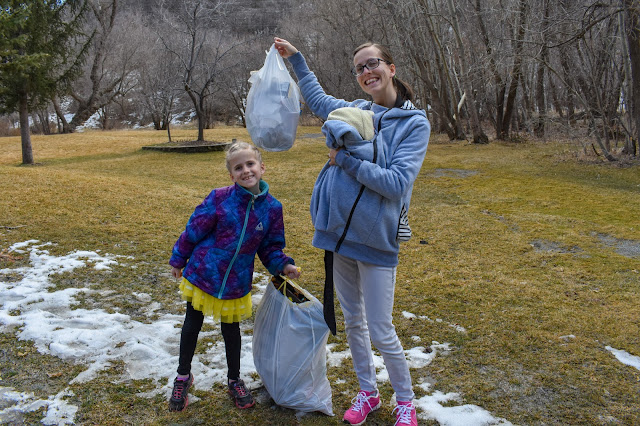 And here are a few pictures Andrew took while we were hunting for trash while hiking plogging: 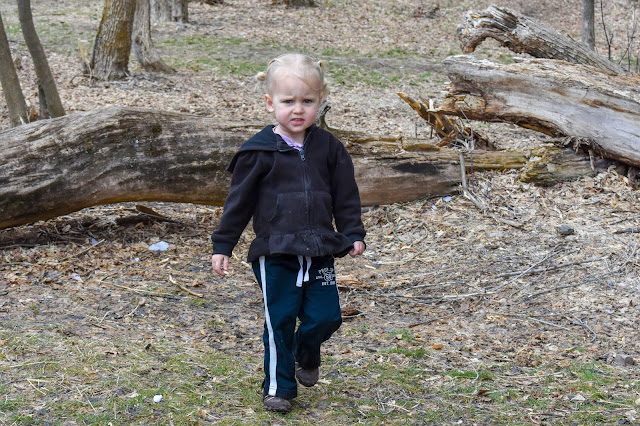 Benjamin wasn't the biggest fan of sitting on this stump: 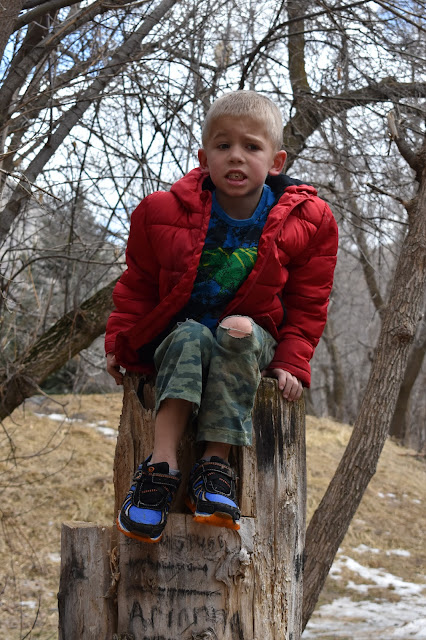 To his credit, it was pretty high up there: 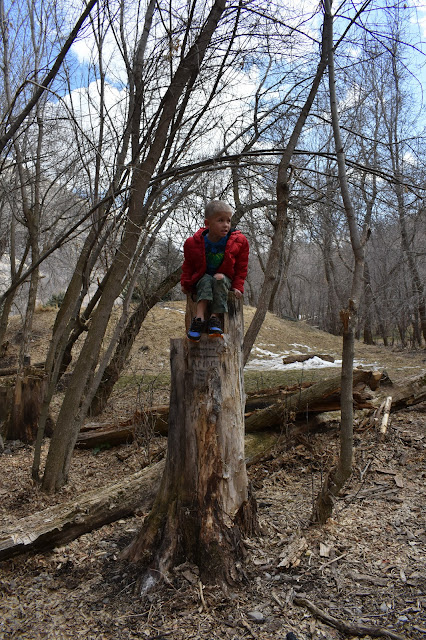 His sisters seemed to enjoy it, however (no picture of Miriam because she was too deep in the woods with me by this point (the other kids weren't as enthusiastic about plogging as she was (though when Zoë was helping she wanted to get every piece of trash; no one was allowed to touch anything but her (there was a lot of screaming, "No, me!"))): 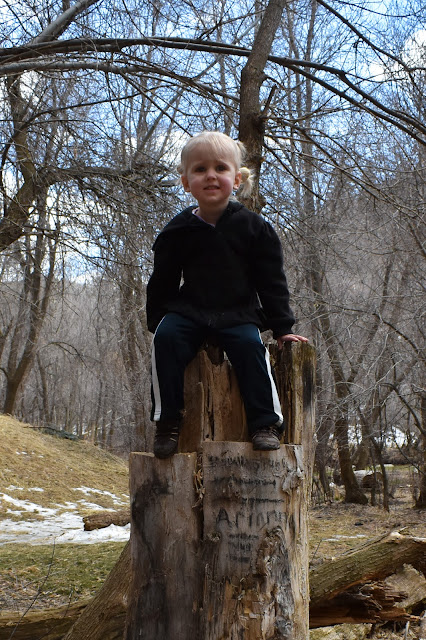 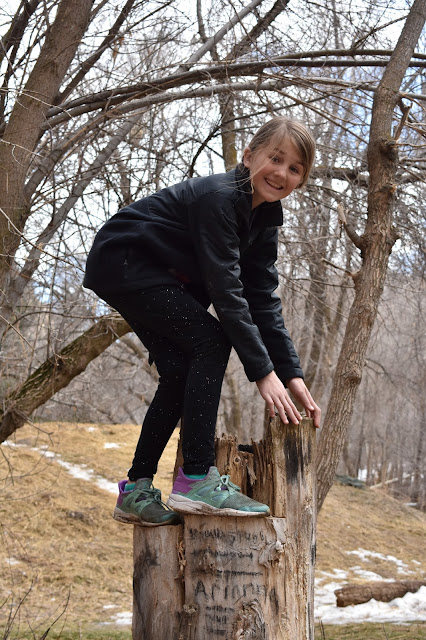 Until next time, canyon. And there will be a next time because we're coming out of hibernation. I can feel it! 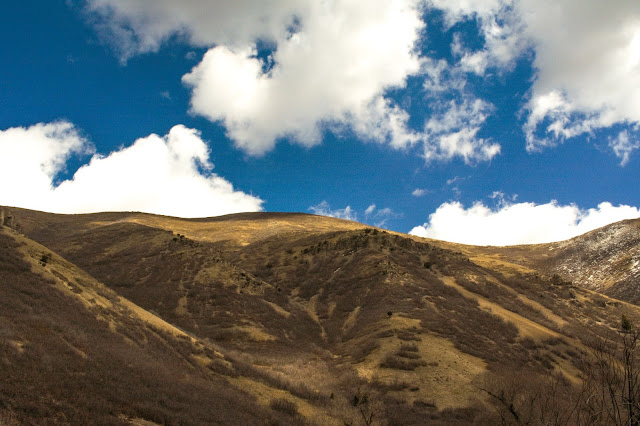 PS. Some moving was being filmed in the canyon while we were there, like a medieval film of sorts with knights and everything. We had to pass by a couple of knights—in chainmail and helmets with visors and everything—to get to the garbage cans and one of them said, "Did you come here just to pick up trash? Thank you!" And that was kind of cool because it's not every day that knight in shining armour thanks you for picking up garbage.

* And backed up various places.
Posted by Nancy at 3:20 AM