Tonight is the eve of Christmas Eve--thus, Christmas Adam. We had our ward Christmas sacrament meeting today. It was really nice, I thought. I sang a "barber shop" version of God Rest Ye Merry Gentlemen with the Lowrys and Brother Elkins. Having been sick all week I won't lie and say that I hit all my high notes because I didn't but the fact that I was actually able to sing was a miracle.

Andrew said that I looked like I was sixteen, standing by Brother Lowry--he's at least as big as Uncle Michael, if not bigger. I think his fingers are as big as my wrists (so I exaggerate some...he's not quite that big but he certainly dwarfs me). I felt kind of silly singing with this group of people. I'm no musical genius so I kind of get confused when I'm handed music and they tell me to sing it a third down from where it's written and then randomly decide to do a key change and all this other crazy stuff. It's a good thing I was singing the melody! We sounded good though, and it was fun.

Andrew, on the other hand, is a musical genius and he played on his clarinet (which he hasn't played since last Christmas) a flute/clarinet duet with only one rehearsal. He sounded wonderful.

Also, Sister Svendsen sang one of my favorite songs, Breath of Heaven. She cried all through the chorus. I always cry through that song. She did a fabulous job. I went up and told her so after the meeting and I said,

I just often feel that I need a breath of heaven to hold me together, especially being a new mother, and when I hear this song it reminds me of how many times I've been given heavenly help--the peace of the spirit, a can of soup from a neighbor, each offer someone gives to watch my baby when I just can't take motherhood anymore. The list of blessings goes on and on. Every little prayer I utter is answered in the most miraculous way--ways I would never dream up myself. Heavenly Father really does watch over us and cares about every desire of our heart, both the small things and the big things.

The song also reminds me that I should be praying and watching for opportunities to serve others and help them feel that breath of heaven. I can be an instrument in the Lord's hands. I just really like that song. 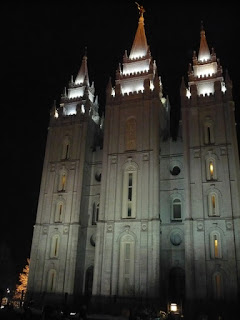 This evening we went up to Temple Square with Andrew's family to see the lights and to listen to Aunt Dorothy sing in the Assembly Hall. Rachel got a little restless, being bundled up inside and not walking around, so I fed her, which was a little tricky but we managed.

Aunt Dorothy, right in the middle 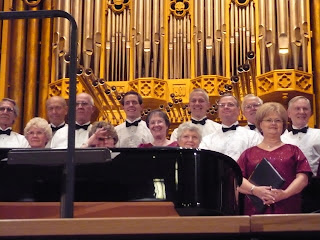 Aunt Dorothy sings tenor, which I think is cool because I have a voice like Minnie Mouse and can only sing tenor if it is knocked up an octave. Singing any note below middle C can be a challenge for me, which is pretty sad because I can't sing very high, either. My range just isn't very big, I guess. Oh, well. There's a part to be sung by everyone.

We were lucky that it was so warm today. We were able to spend quite a bit of time outside without worrying about getting Rachel too cold. We went inside the newly refurbished Tabernacle. The benches are a whole lot more comfortable now--you can sit down without banging your knees on the bench in front of you. 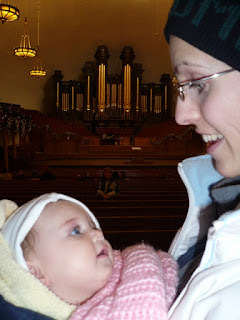 We then went and watched the Nativity story outside of the tabernacle. 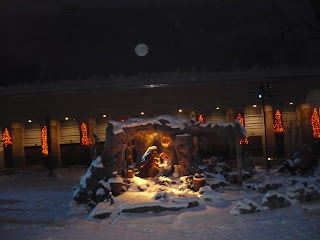 We went to the Visitor's Center and watched the movie of Luke II, which is just an extended version of The Nativity. Rachel couldn't sit through the seven minute movie, though. Grandpa took her out and walked around with her. She likes to walk around with Grandpa because he lets her touch everything: the flowers, the walls, the signs...everything. 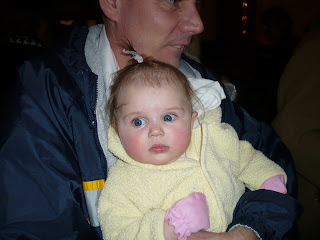 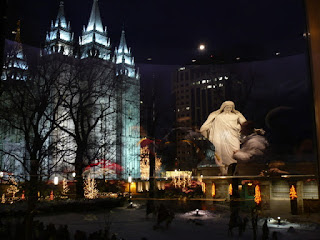 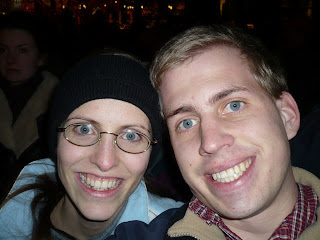 Happy Christmas Eve Eve, or simply Christmas Adam, whatever you prefer.
Posted by Nancy at 12:36 AM