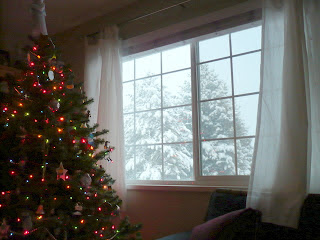 This morning we woke up and looked out the window (after answering the phone, of course) to find the first real snow of the season. It's snowed a couple of times before today--I believe General Conference was the first snow this year--but not good snow. This was a nice, thick snow that lasted all day. Therefore it's our official first snow of the season. One of five acceptable snows. The other four are Christmas and New Year's Eve and Day. I could live quite happily if it only snowed five times a year and it was nice and balmy all the other days. 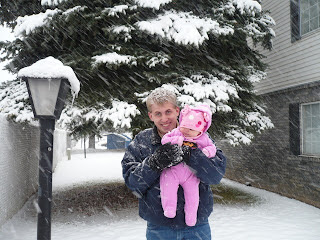 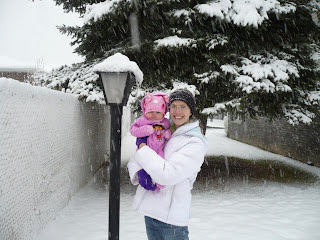 We couldn't resist going outside to plays so we got all bundled up and headed outside. 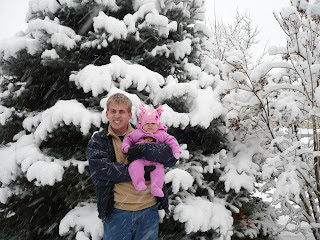 Rachel wasn't sure what to think of the snow, and she didn't really like how her hat kept falling over her eyes. She did enjoy, however, watching mommy and daddy roll around in the snow. We made a little snowman for Rachel--the snow wasn't sticky enough to make a big snowman--and she liked that. 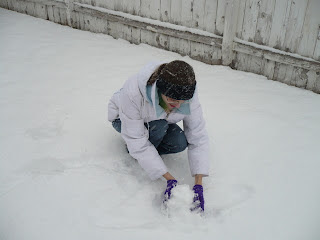 Daddy and Rachel finished it 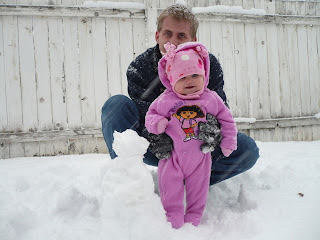 The snow was perfect for snowballs though. I pegged Andrew right on the back of the head. Since I was aiming for the middle of his back this proves how dreadful my aim is. Considering I actually hit him though...I guess my aim's not too bad. Oh, who am I kidding? I just poked a baby in the eye with a needle--what are the odds of that happening--so of course the very next day I'd hit my husband square on with a snowball. I swear both were accidents! 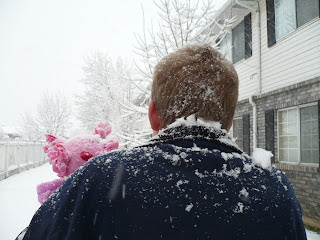 Right before coming in we had Rachel make a snow angel. She didn't like having the snow fall straight on her face one bit! 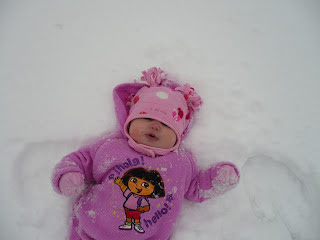 When we were all sufficiently cold, we went inside to get warm. I though Rachel would be freezing because she kept sucking on her mittens while we were outside, but she was warmer than I was. She's always warmer than I am. She takes after Andrew in that respect, I guess. While we were taking off our winter clothes, Andrew collected some snow that we tracked into the house and pelted me with it. Vengeful, isn't he? 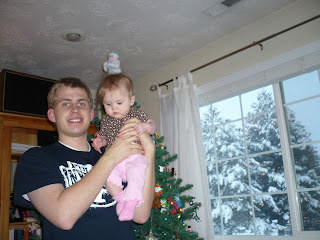 With our many layers set out to dry on various chairs and door knobs, we all settled down for some warm drinks. One of us had hot chocolate, another some warm milk, and another hot apple cider. Can you guess who had what? 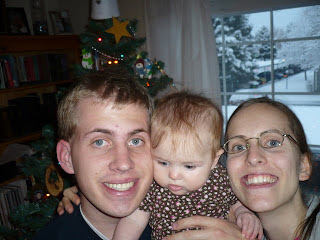 (apparently something on the floor was very interesting)
Posted by Nancy at 6:45 PM