Sing we now to sleep

I often sing softly to Rachel as she's falling asleep, but, boy, does the child ever take a long time to fall asleep! Last night we started trying at 8:00 and finally got her down for the night at 11:30! She's been sleeping in our bed for the last little while (2 months, maybe?) because she just wouldn't sleep in her crib all through the night and I was going crazy (lack of sleep will do that to a person). Since she slept so well with us we just kept her in our bed, giving us all a good night's sleep.

Rachel asleep in our bed, upsidedown 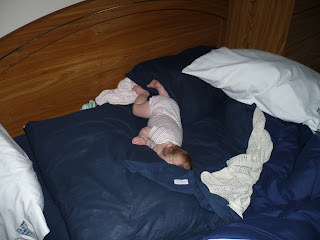 A few nights ago though she was so squirmy that I just couldn't stand it. She kept trying to eat me in her sleep and she was taking up the whole bed so I picked her up gently and put her in her crib. She slept through the rest of the night...and the next night...and the next. Three nights in her own bed! This morning I didn't hear a peep from her until shortly before 10:00!

Lately she's been pretty good at just falling asleep on her own but some nights she still wants me to nurse her to sleep. Either way though, she usually ends up with some lullaby songs from me which she'll sing along to. And when I leave her to her own devices, she continues singing herself to sleep. It's so cute! Rachel also likes to sing along at church (unless she's too busy eating the ward bulletin, that is).

This afternoon she started acting tired and singing at around 2:30 and finally fell asleep just a few minutes ago. She's been busy playing around and trying to crawl all morning and mid-afternoon. I don't know how many times I stacked that tower for her just so that she could knock it over again and again. She finds that hilarious. It gave us lots of practice with our color words (saying on my part, listening on hers) and practicing the sign for "more!" She loves it! She kept playing with it as she was drifting off to sleep. Her head would pop up off the floor after I thought she was asleep and she'd reach for another piece and then her eyes would droop and she'd drift off again only to wake up suddenly and try to get another piece. She's such a silly baby. 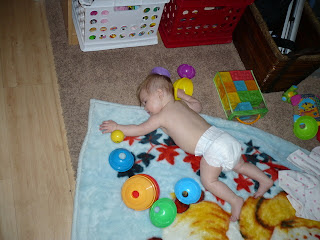 It's really the only way we ever get her to go to sleep: let her completely play herself out. This girl has so much energy!

(I'm planning on posting a video of her soon...as soon as it uploads...so if you want to hear Rachel sing, stay tuned).
Posted by Nancy at 5:26 PM