Christmas with the other Heisses

We headed over to Andrew's parents on Christmas afternoon to have some traditional potato pancakes and beef stew. It was actually my first time having them, but it's Oma's recipe--Andrew's great-grandmother. It sure was delicious. I'll have to learn how to make them because I'm sure Andrew will ask for them eventually. He's so funny.

He was explaining to me that potato pancakes are probably the only reason he still likes beef. He hates pretty much all other meat: chicken, turkey, fish of any kind, etc. He'll do beef though because he loves pancakes, so with potato pancakes the beef stew is like syrup and since he loved pancakes he had to love syrup and thus he loved the beef stew and never started to dislike beef.

Personally I enjoy the fact that Andrew isn't fond of meat. I'm not too fond of it either and I really hate cooking meat--he doesn't expect me to make meat at every meal because he doesn't really care for it. I certainly lucked out with my man!

Anyway, we had a wonderful time visiting with family: Aunt Nicki, Emma, Grandma Pat and Dave, and Richard and Diana...and the people who live in Andrew's house, of course.

Rachel and I doing what we do best 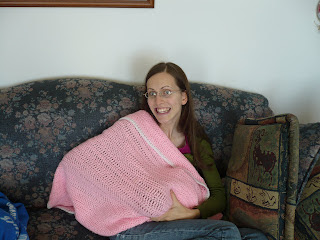 Rachel had a fun time snuggling with Grandpa. And she absolutely loved everything about Emma--her cell phone, her velvety shirt, her popcorn sock. Everything. 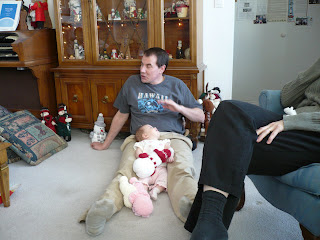 Still snuggling but transfixed by Emma 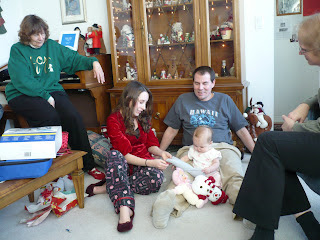 Hanging out with Grandma 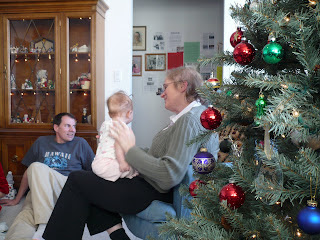 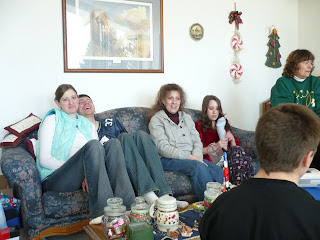 Emily was here, too...but I think at this exact moment she was in the kitchen trying to convince everyone to come and have some mint brownies. No one wanted any though because we were all stuffed on potato pancakes.

Steve, Andrew's BFF, was here visiting his parents with his wife and baby. They live just a few doors down from Andrew's parents so we headed over there to catch a glimpse of Adam. He sure is a cutie but we didn't get to see him very much. First he was sleeping...and then when Jodi finally brought him up, Rachel decided she wanted to eat. When I was just about finished feeding Rachel, Adam decided that he should probably had a snack. The visit just went downhill from there.

Andrew, Steve, and Richard decided that they should play Allies and Axis...or something...a strategy game based on WWII. I opted not to play. Games like this make me crazy. I cannot stand how slow they go and how long they last.

I stayed at the Gillespie's for an hour while they set up the game. It took a full hour to set up the game! I then decided that I should probably take Rachel back to visit with her real family. Adam was still eating anyway... 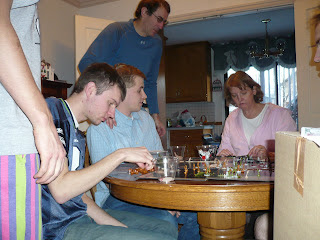 So I went back to the Heisses and had a wonderful time playing Backwards--a very, very challenging game. My head hurt when we were finished. You have a word read to you, either forwards or backwards, and you have to figure out how to say it either backwards or forwards. For example, stressed is desserts...but that one's easy because it's a saying. Sdrawkcab is backwards. Challenging would be gnignellahc--but someone would read "Gnig-nel-lahc" and you'd have to figure out that the word intended was actually "challenging" without writing anything down, while everyone in the room is laughing at you, while the timer is going. It's intense...

After we finished that game and everyone was gone, I phoned over to the Gillespies to tell Andrew that he, also, should come hang out with his real family. He's been over there for three hours...on the phone he said,

And that, folks, is why I didn't play that game. Three hours and only one turn? Ugh.

We finished off the night visiting with Andrew's family and then borrowing Ratatouille from them. We haven't seen any movies that were released this summer and need to catch up. We hear a lot of them were pretty good--Ratatouille definitely was!
Posted by Nancy at 9:11 PM