This morning Andrew brought out a shelf we bought ages ago to put up beside Miriam's bed. Ever since she started reading her bed has been full of books and it kind of needs to stop, but we've been a little slow in getting it put up.

"Today's the day," Andrew announced. "Do you want to find a stud while I get the drill?"

Sure. Yeah. Sure, I'll just find a stud. Because finding studs is easy.

I started hitting the wall with my knuckle, listening closely for any change of sound. Nothing really stood out to me. We've measured walls before so we could guess where the studs were but this time Andrew said, "Why don't we just get a stud finder? How much can they cost—like $20?"

He started getting ready to go to the hardware store and I said, "Why don't you take some of our Christmas money and get a power washer, too? Because I was looking at rental prices and, frankly, we can buy a machine with the same money we'd spend renting one a couple of times."

Andrew agreed this was a good idea. We have so much gross build up on our play set that our children have been refusing to play on it and—let's face it—life is better when they're out playing on it. We also just...we live in the south. Lots of humidity, lots of pollen. Things get yucky, fast; our swing set isn't the only thing that needs a good power washing.

Soon Andrew was home with a power washer.

"We should set it up right now!" he said.

"Right now?" I asked. "I thought we were going to do Miriam's shelf. All the tools are on her bed and..."


"But it's a beautiful day! If we clean the swing set really quick the kids can play on it while we figure out how to mount the shelf."

"Good point," I conceded, taking the manual he was holding out to me. "You're really excited about this, aren't you?"

We went through the directions and got the thing put together. We followed the directions to power it on. It turned on for a brief second and then switched off.

We moved the plug to the other outlet and tried it again. Again it turned on for a brief second before switching off.

I read a little deeper through the manual and found some words that were confusing on account of my not being an electrician. Words like "individual branch circuit only" and "GFCI" and all sort of things.

We got our extension cord and tried it in our GFCI outlet in the kitchen. No go.

We tried it in a few other outlets in our house. It didn't work anywhere.

What were we doing wrong? Did we really have to use an individual branch circuit—like the kind a dryer or oven? Because that's not at all what our plug looked like. The power washer had excellent reviews both on the store website and on Amazon, so why was it so hard for us to figure out?

Frustrated, Andrew boxed it all back up and went back to the store. He returned it without a problem and got another one...of the same model because surely it was just a fluke of sorts. Before buying it he asked someone in the store about what kind of outlet to use and the employee said just any old outlet should do.

He brought home the new unit and slapped the thing together in no time. Then he ran into the house hollering, "You have to come see this! We are such idiots! I just can't even believe this!"

I stood on the deck. Andrew switched on the motor. He grabbed the wand and, lo and behold, a beautiful arc of water blasted out of the hose.

"You have to pull the trigger!" he hollered over the noise of the machine, laughing wildly the whole time. "You have to hold it down!"

"Yeah. It makes that noise when it turns on, but then is quiet again until you pull the trigger!"

"We are so good at being adults!" I said, shaking my head.

Notice the orange slide on the far right before: 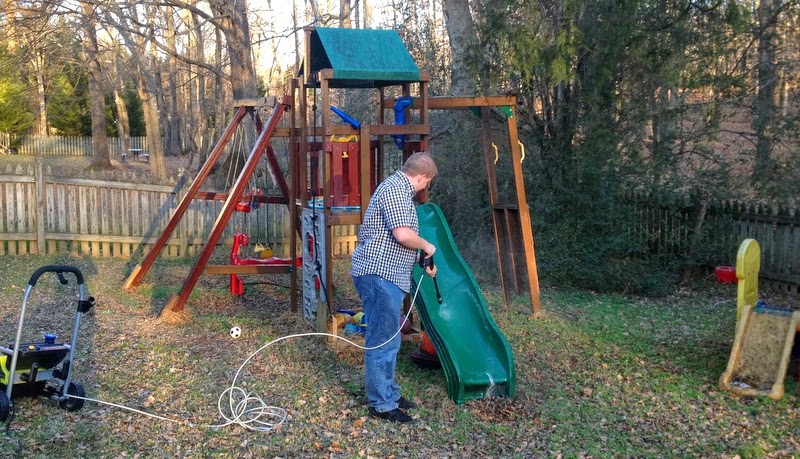 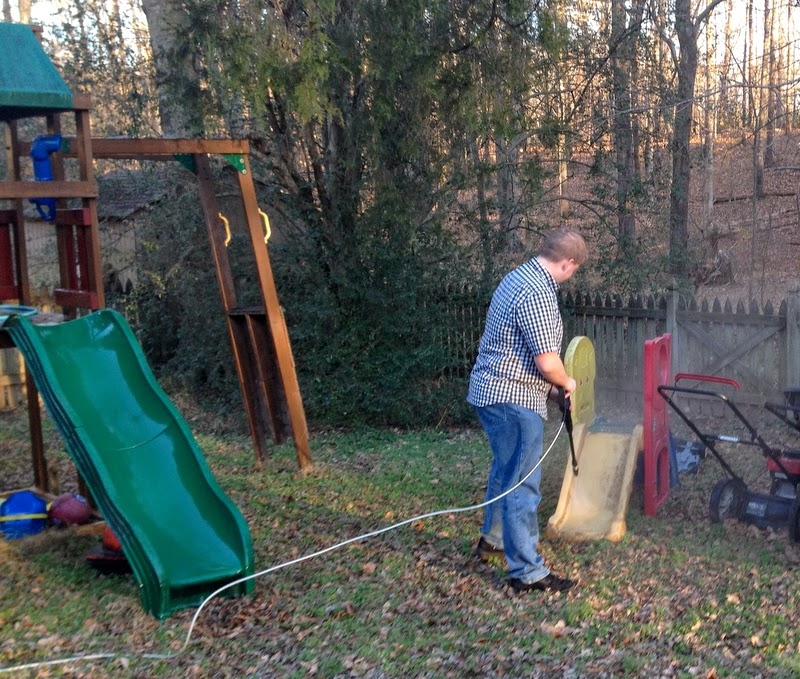 Oh, and we tried out our stud finder, too. It, apparently, isn't idiot-proof and worked on the very first try.

"Directions for use..." Andrew said, smoothing out the instructions.