Hey Everybody! It's Family Night...

During quiet time yesterday Rachel and Miriam put together an FHE lesson for today. It was quite elaborate and quite humorous.

The lesson started with Rachel dumping a handful of sea shells and rocks and stuff out of a bag.

"Who made these?" she asked.

Rachel had chosen some pictures of the Savior from the Gospel Art Kit. She'd covered one of the pictures with little squares of paper and she found a die my Aunt Judy made many years ago that has question words instead of numbers. We had to take turns rolling it and answering whatever question she asked us about Jesus's life and if we mentioned one of the pictures she'd chosen we got to hold that up.

Benjamin got to go first. He rolled "what" (and nearly pegged Rachel in the head with the die).

"What does Jesus do?" Rachel asked.

"Jesus 'oves me!" Benjamin said, giving himself a hug. "Jesus hugs me!"

"Yeah, but what does he doooooo?" Rachel repeated.

"Rachel, that's a good answer. He's two," I reminded her.


We answered questions like, "Where was Jesus born?" and "How did Jesus die?"

When we'd peeled off all the squares of paper we revealed a picture of the Savior in the Garden of Gethsemane. But Rachel still had two pictures left over! So we had to talk about those, too. It was super important because she also had drawn a picture of lips (and labeled them in case we didn't know) and we had to discuss why that was relevant.

One of the pictures left over was of the Last Supper. She wanted to talk about Judas Iscariot and how he betrayed Jesus with a kiss using his lips. See? Her picture was totally relevant.

Then she held up a copy of the Old Testament.

"The Old Testament," Andrew and I said.

"But what's it about? Whose life does it tell us about?"

"I think you were going for the New Testament," I said. "With Matthew, Mark, Luke, and John... The books that actually talk about the life of Christ..."

"That's before Jesus was born," Andrew said. "Adam and Eve. Abraham. Joseph and the coat of many colours. Noah."

"But the Old Testament talks about Jesus, too," I assured her. "Like in Isaiah."

It was pretty funny. In her defense most of the bibles in our house have the Old and New Testaments stuck together in the same book. She managed to find the one that was different.

When she was finished with her lesson Miriam jumped up and said, "I have the other!"

The "other" can be a game or a treat or a walk or whatever (sometimes it's nothing), but Miriam was well prepared with "other" activities.

Part one was a matching game. Miriam had written down words "about Jesus" and then had cut them up and we were supposed to match them together. This is what we had to work with:


I made the first match: jesos (Jesus). Miriam made the second match: tech (teach). And then we kind of got stuck. This is what we had left:
Eventually Miriam figured out that obay (obey) was one of the words but that still left us with l, e, e, and a blank piece of paper. We decided that she meant to have one of those e's be an o and the blank paper was supposed to have a v on it. Our last word was le_e (love).

"And that's not all!" Miriam announced. "Part two is a beanbag toss game!"

She "made" a beanbag by stuffing a baby blanket into a mini-pillowcase and we threw that around for awhile (and only almost knocked stuff down once or twice).

That was family night.

Oh, except I left out the part about Benjamin being the conductor. It went like this:

"Say, 'Welcome to Family Night, everybody!'" I prompted.

"Okay. Who do you want to choose the song?" I asked.

"You need to choose a church song," Andrew said.

"Like Jesus Wants Me for a Sunbeam," Miriam suggested.

So that's what we sang. And no one even crashed into each other when they were jumping around.

"Now who do you want to say the prayer?" I asked.

"ME!" Benjamin said, and he folded his arms and started praying.

"Now you need to ask Daddy to go over the calendar," I said.

"Me find mine phone!" Benjamin yelled, running into his bedroom.

And that's how conducting went. Other parts I left out were how Rachel randomly said, "Dad, do you know how male frogs attract females?" and then puffed her cheeks full of air and the part where Benjamin turned into a puppy and licked Andrew's face all over.

And here's a picture completely unrelated to anything I wrote...because it's from Saturday: 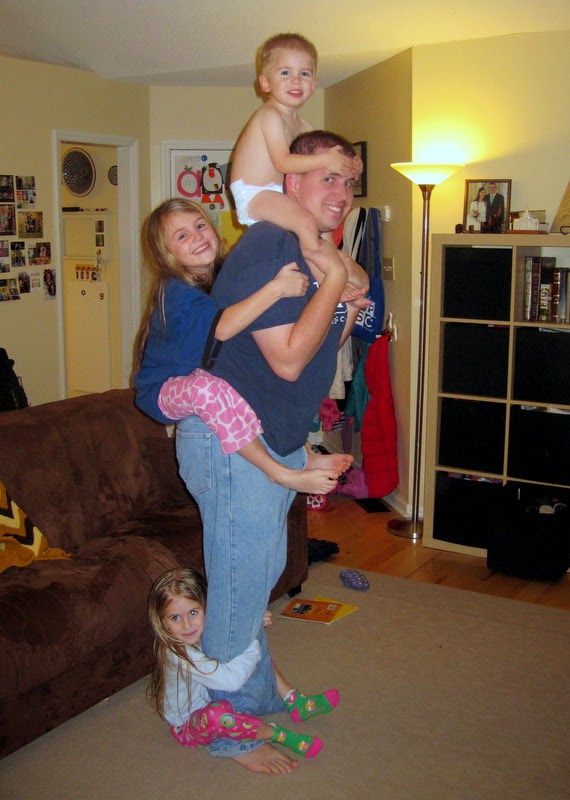