Sometimes I leave our Thankful Tree up until January. We started it mid-October (around Canadian Thanksgiving) and added leaves to it through late-November (around American Thanksgiving) when our celebrations gave way to Christmas. And now it's the end of January and I'm just getting around to taking it down. Thanksgiving was two months ago and Christmas was put away the first week of January so I'm really slacking.

But there was a perk! When we did our lesson on the Vision of the Tree of Life a few weeks ago for FHE (last week maybe?) we still had a tree ready and waiting for us. Add a broom handle held up by Dad for an iron rod and an afghan tossed on the floor for the filthy waters and we managed to put on a pretty good play.

Still, it's almost February so it's about time the tree got taken down. I pulled all the leaves off today before I realized that I didn't ever take a picture of the kids in front of it...at least not an official picture. This one will have to do: 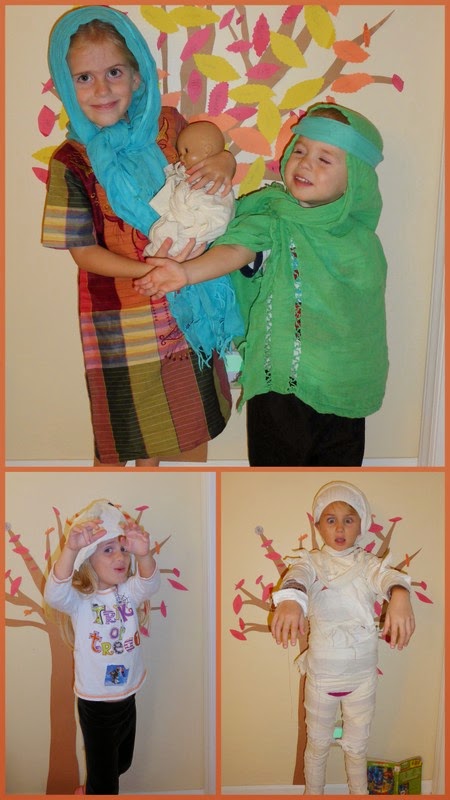 It illustrates how empty it was in October and how full it was by December.

I love this tradition but I wasn't really "in" to the tree this year. I helped the girls put together the tree but other than that I left it up to them. I just didn't have it in me to sit down with them every night and ask them what they were grateful for that day, though we did sit down as a family a few times and fill out leaves together for FHE. Mostly I was lying on the couch in the evenings saying, "Sure! Make as many leaves as you want. Help your siblings. You know where the stuff is."

And it's kind of nice being to that point in life—the point where there's actually a child old enough to take over projects like these when the only project I feel like doing is projectile vomit (Thankful Tree season lined up perfectly with First Trimester season and though I've never actually thrown up due to pregnancy I've certainly felt like it).

Anyway, here's the list of things we were grateful for this year (in no particular order and where "person" means the person whose handwriting I identified, not necessarily the person who was thankful for the item (because I'm sure some of these things were Benjamin's idea)):