I've been a little obsessed with a contest Auntie Em entered lately (and that might be an understatement). She's trying to win a trip to the Bleeding Disorders Symposium in St. Louis this March and she's been clinging—just barely—to first place for the past few days.

This morning when I first checked she was four votes ahead. Right now she's about 70 votes ahead. And I'm still a bit nervous even though there're only an hour until voting ends. Winning this contest would be so wonderful for them and though it's a "free" trip, I have to repeat the adage that nothing in life is free. This contest has been a lot of work! I really hope they win!

Here's the picture in the contest—it's my adorable nephew, Gavin, wearing a shirt that says, "I love someone with hemophilia": 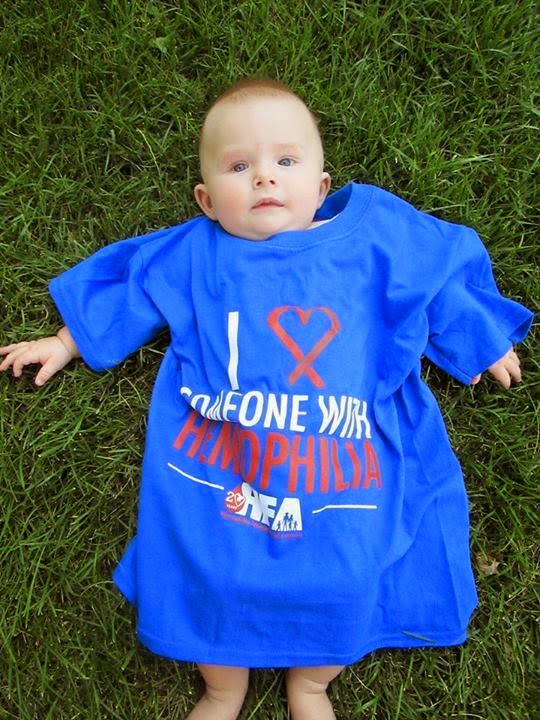 Uncle Morgan (Emily's husband) has hemophilia, which is a blood clotting disorder. And I actually also have an aunt with von Willebrand disease (but she's not a contestant in this game so my loyalty wasn't split).

I spent the bulk of the time Miriam was at preschool sending out messages to people, asking them to vote. It certainly rallied the troops, but poor Benjamin felt a little neglected. And somehow kept ending up with yogurt.

This was a thing yesterday, too. It was MLK day so Rachel was home from school and it was a beautiful day, so the kids spent most of the day playing outside but somehow I kept catching Benjamin with yogurt.

"I don't know how he's getting yogurt!" the girls insisted, but I didn't quite believe them until I caught him with his third yogurt when the only people home were he and I.

Apparently he can open the fridge, and peel those tricky foil lids off the yogurt containers.

He's consumed a lot of yogurt the past couple of days!

Because he was so good while I was messaging everyone in the world who knows Emily and asking them to vote I decided that I would make his wildest dreams come true—I'd take him to the Life and Science Museum.

We packed lunch, picked Miriam up from preschool, and instead of driving home we headed to the museum. Miriam didn't even notice until we'd turned down the street to the museum.

"GEE! Also, we need to have lunch. I only had a snack at preschool and I'm feeling hungry."

Fortunately for her (and everyone else), our first stop was the picnic tables for a picnic lunch. Then we headed into the museum for some fun outside time. They're doing a lot of construction right now (building a new outdoor park) so the usual park is...well...gone, so we headed on past all the construction and hit up the farm first.

Miriam was super excited about the bunnies because they were "so cute snuggled up together!" She took this picture: 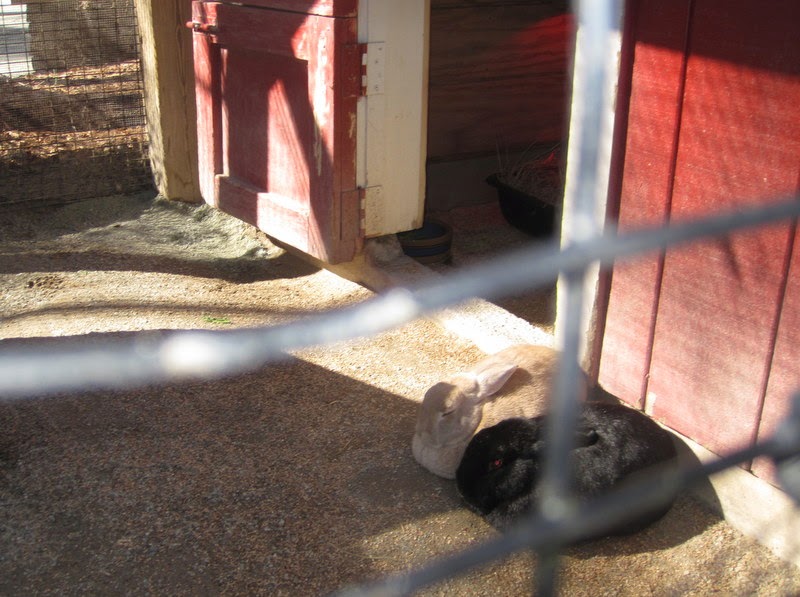 They had some new things at the farm—the kids were fans of the saddles on logs: 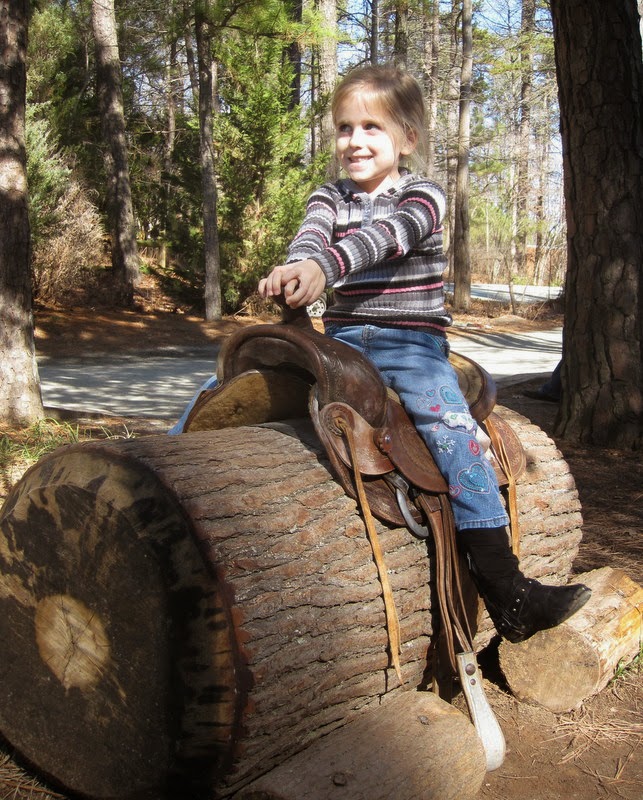 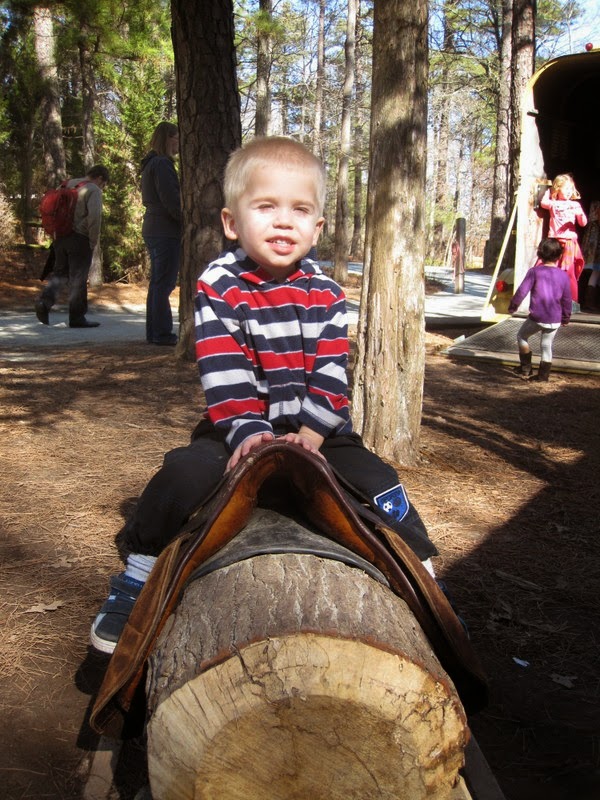 After we visited the farm we headed to the Dinosaur Trail (because that's what Benjamin has been dying to do the past couple of weeks). Miriam and Benjamin spent quite a bit of time climbing on this dinosaur (as they usually do): 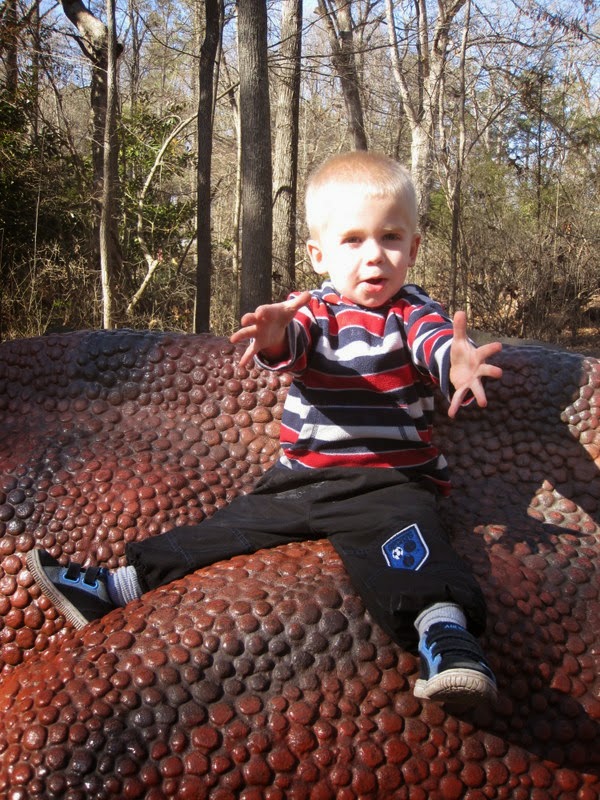 They spent even longer playing in the excavation pit. There were a bunch of children there and they all played together so nicely even though they were literally just thrown together. I think they were all charmed by the beautiful weather (high of almost 70°F today).

Both Miriam and Benjamin were a little upset when I told them that we had to head home because we'd "only" done the farm and the dinosaurs. Benjamin kept trying to join other families while we were making our way back to the front. He'd overhear a conversation about "let's go see the bears" and he'd say, "Me go see bears, too!" and would turn to run after whatever family was heading to the bears.

He did it a handful of times until I threatened to put him in the stroller and strap him down unless he just stayed with me.

We had a wonderful nap once we got home. When we woke up Benjamin said, "Me go moo-see-um again!" But I told him we had to wait for Rachel to get home from school and then we had to do homework and make dinner and... He wasn't entirely happy about any of this, but we spent most of the afternoon playing outside with neighbours and their dogs so he quickly got over his disappointment.

Overall it was a very good day...and I can say that even as I sit here biting my nails over this contest.*

* I don't really bite my nails; I just want to make that clear for Rachel who does bite her nails and is trying to quit.
Posted by Nancy at 11:04 PM