I had the ultrasound first thing in the morning yesterday. Everything looks good so far: all body parts were accounted for and are functioning and baby is much more active than I can feel, which I'm grateful for at this point.

The only potential problem is that my fluid is measuring "on the low end of normal," so I'm supposed to keep track of how much water I'm drinking. I'm pretty sure if my doctors had their way I'd just be eating and drinking ALL. THE. TIME.

I already feel like that's what I do but evidently my fluids are low and my weight gain is slow. So I'm supposed to eat more, drink more, and conserve energy. Doctor's orders. I was trying to do that before but apparently I'm not doing a good enough job. Whatever I manage to do will likely never be enough. But whatever.

After taking all the initial measurements we flipped over to the 4D ultrasound and snagged a few pictures of our baby's face. Regular 2D ultrasound pictures don't really bother me (though I know my mom thinks they're kind of strange to share) but the 4D ones kind of creep me out.

(4D is 3D + "real time" (regular 3D can be delayed, I guess, so what you see on the screen isn't necessarily what's happening right now).

I think it's because with the 2D image the baby is still mostly an idea. You have to kind of imagine what it looks like. When my sister was expecting Olivia and Sabrina, "the twins," my nephew Andrew looked at the ultrasound picture and said, "Oh, I know why they're taking so long to get here! God's still putting together all the pieces!"

Enter the 4D ultrasound and all the mystery is stripped away. 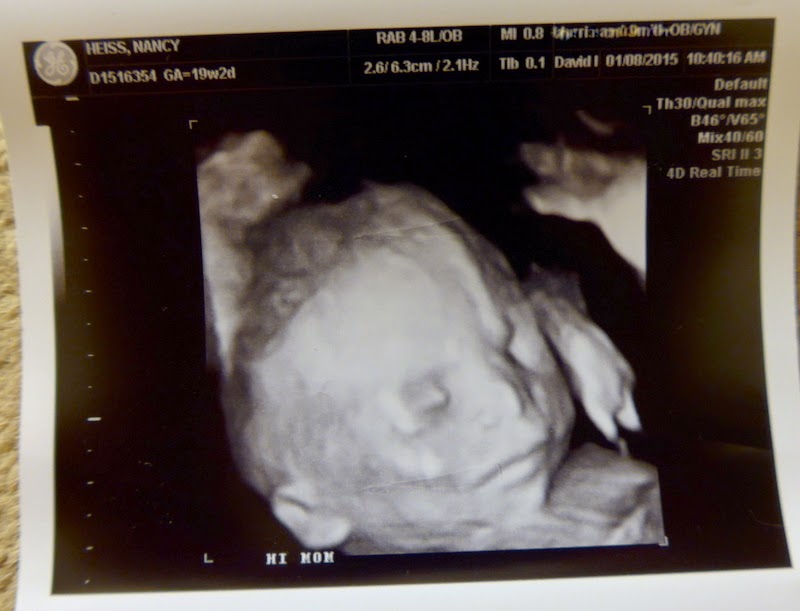 That's definitely a head. And that head is definitely coming out in T minus 20 weeks. And won't that just be fun? But look at that cute little face!


We flipped back to the 2D ultrasound for a few more measurements and the ultrasound tech asked if I wanted to know the gender, should he happen to stumble upon such information. I said that I definitely did (because Andrew refuses to seriously discuss names until we know the gender).

"This is your fourth?" the technician verified.

"Then you're probably almost as good as me at reading ultrasounds by now. Looking at this picture, what do you think the gender is?"

"Why do you think that?" he asked.

"Well, besides the absence of anything obvious, there's those three white lines right there between the legs."

"That's pretty good evidence," he said. "Sometimes it's not so much what we see; it's what we don't see. I don't see any boy parts and I also see those white lines so it looks like a girl to me, too."

And that's totally fine with us because we didn't have a preference going in. We hadn't been able to come up with any boy names anyway, so this makes it kind of a convenient, though we still have to finalize the name (we're debating between a few right now).

We told the kids that we're having another girl after we finished opening Christmas presents yesterday. Miriam was ecstatic because she needs a little sister to play with (she already has a little brother and Rachel's an older sister so she doesn't count). Rachel was a little disappointed because she wanted a boy to even out the numbers in our family, but she's fine with a girl. Benjamin's not disappointed now but I'm going to guess that he will be in a few years when he figures out that he's terribly outnumbered.

After my ultrasound I had my first 17P shot. I was a little nervous about it because the last time I got a shot in my rear end it was a steroid shot and it was so painful, but this one really wasn't so bad. Admittedly now I feel like I ran a marathon or something, but it's really not too bad. I wasn't very sore after my marathon, in case you were wondering. I mean, I was sore but not very sore. (My half marathon, on the other hand, had me hobbling for at least a week (it was downhill for miles)).

So that's how I feel today: sore, but not very sore.

After the shot I met with one of the doctors at my clinic. I'm supposed to rotate through all of them before I have the baby so that I'm familiar with whoever's delivering on any given day. I'll be going in every week from here on out so I'm pretty sure that won't be too much of a challenge.

She used the doppler to measure the heart rate even though I'd just come out of an ultrasound. I'm not sure why. But whatever. She said the baby sounds great.

Also...so far no one has measured my fundal height. Is that not a thing anymore? I remember that being fairly routine through my other three pregnancies—come in, get weighed here, pee in this cup, take your blood pressure, lie down, measure fundal height, listen to heartbeat, see ya!

While they've never measured my fundal height, my doctors here have spent a lot more time discussing possible complications with me and asking me lots and lots of questions. That's probably because I have that special "high risk" box checked on my chart now. But that's just a guess.

They sent me home with my glucose drink. I get to drink that next week before my appointment for my early gestational diabetes screening. If I pass that then I'll get to do it in a few weeks again anyway for my regular gestational diabetes screening. If I fail either of those then I'll get to do the three hour test. So basically no matter what I do I'm doomed to choke down that awful stuff more than once. But I suppose it's all for the best.

I'll probably do more baby posts from here on out simply because I'll be making weekly visits to the clinic...so what else will I have to talk about? (I'm excited for a new baby...but a little less excited about the shots and the tests and the appointments every. single. week.)
Posted by Nancy at 9:38 PM