On our way back up to South Jordan on Saturday we stopped by Thanksgiving Point to visit the Museum of Ancient Life (or, as Benjamin calls it, The Dinosaur Museum). We've driven back and forth from South Jordan to Orem so many times the past few weeks and every time Benjamin sees the big dinosaurs on the side of the building he wants to check it out.

We get in for free with our Life and Science Museum pass, so we dragged my parents along for the adventure.

In the lobby we ran into a familiar face. My friend Courtney (who was in my ward when we moved to Calgary when I was nine, and then was in my ward when we moved to High River shortly after she did, and then who was my roommate for a summer at BYU--which meant we were in the same ward again, and who's first baby was due around the same time Benjamin was (but who was born the day before Benjamin was discharged from the hospital)) had forgotten her daughter's coat and had come back to get it just as we were getting there!

It was so good to see her, especially since I didn't end up meeting with any friends this trip. (We were planning on it but then everyone got sick and...we just didn't). 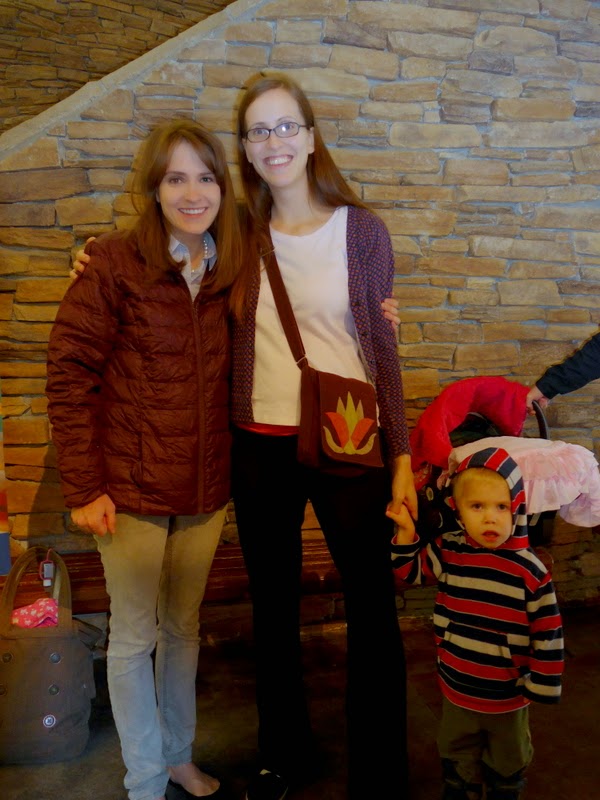 Andrew's mom had taken the girls and I to the museum on one of the $2 days a couple of years ago and I remembered it being a pretty cool place so I asked my mom if we were talking about the same place and if she'd been through the whole museum.

She said she had and it was just lame. But then we got inside and she said, "Oh, this is much different from when I brought Josie here!" 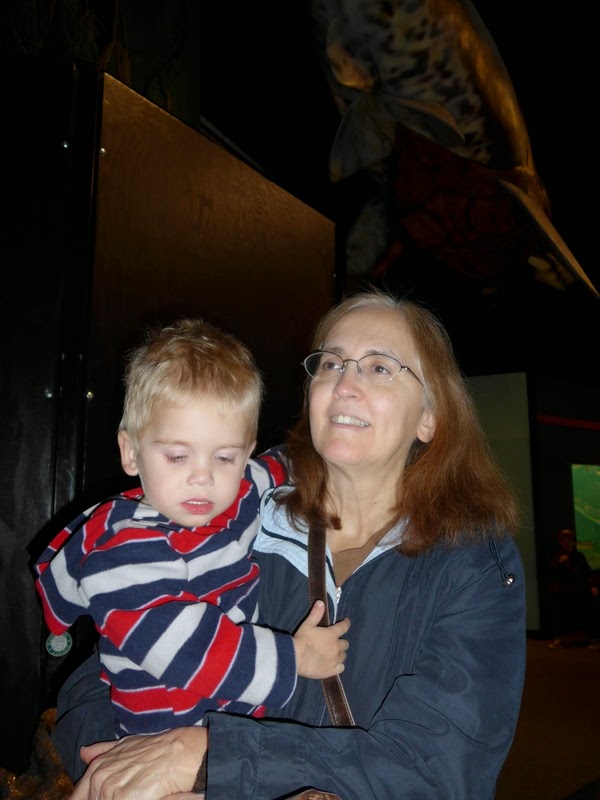 The kids had fun running around and looking at everything. There are quite a few things to touch, which is always helpful in a museum geared toward children. I think Bumpa would have preferred for them to slow down a bit, but that's hard to do when there's so much to explore! 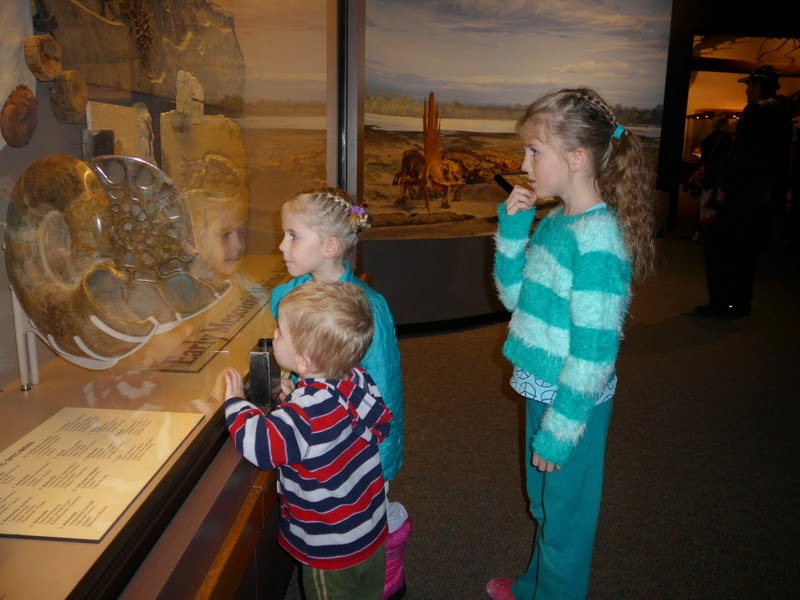 We did get to rest for awhile at the erosion table: 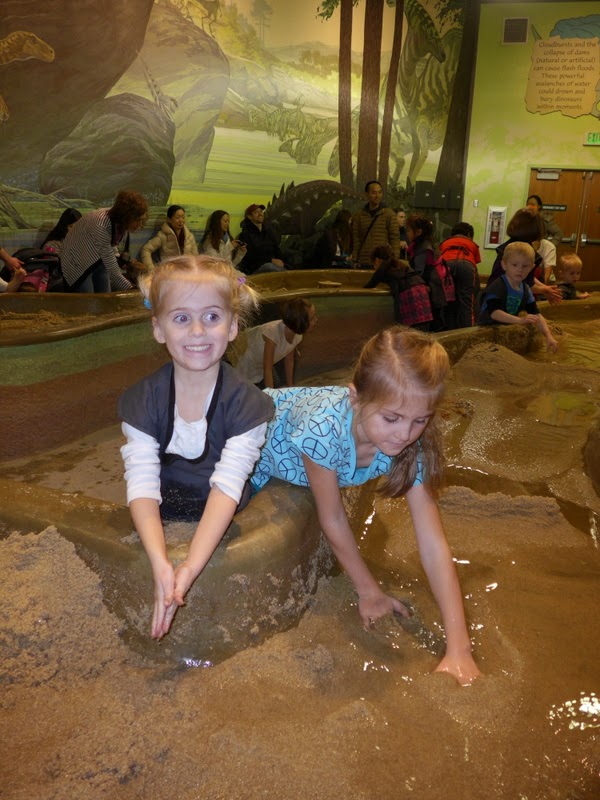 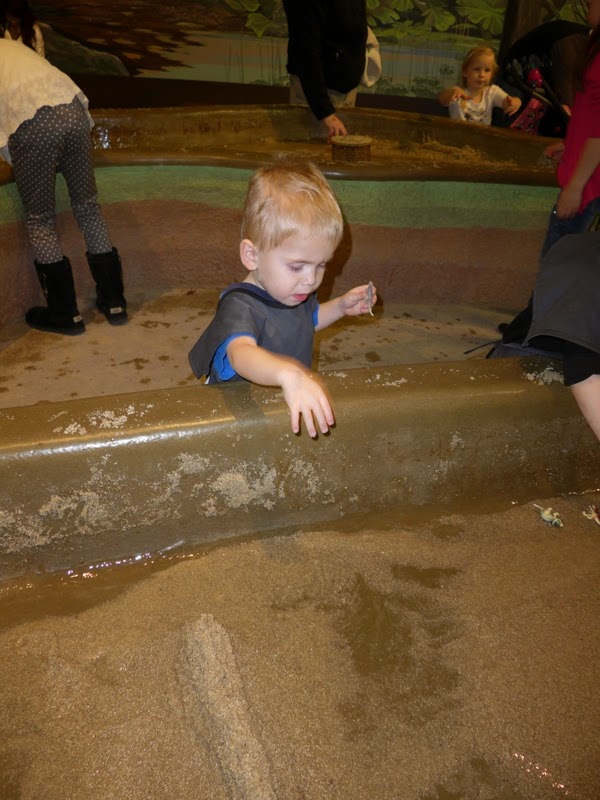 Once they were done with that, though, we were off racing through the museum again. 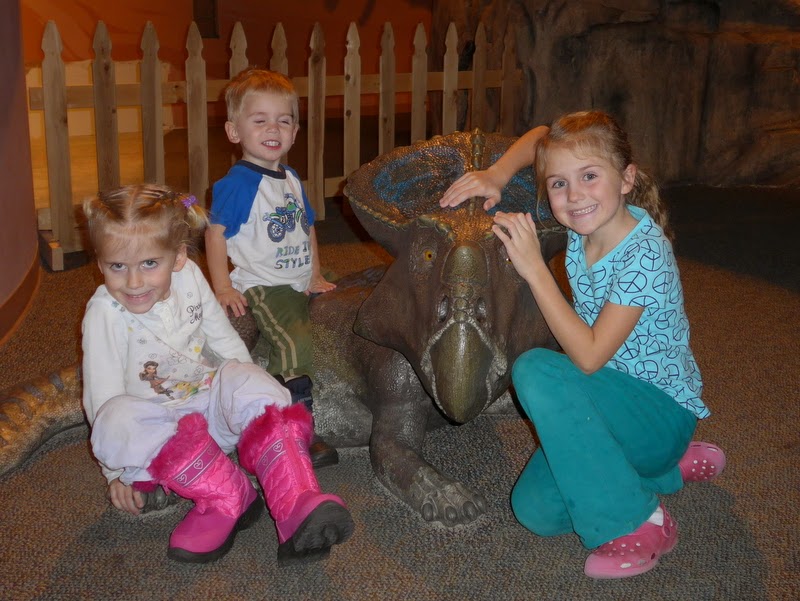 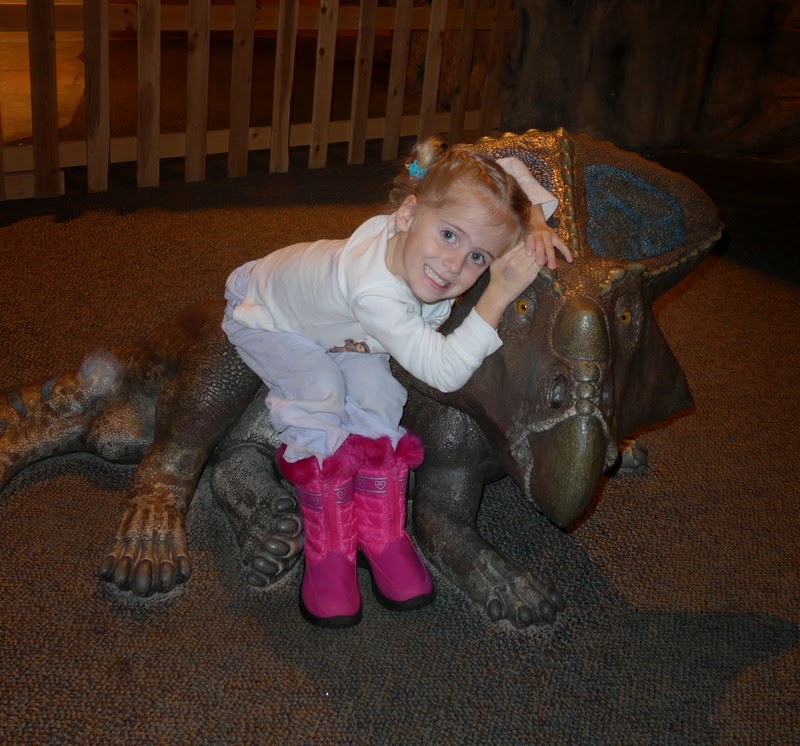 I have to admit that the "underwater" portion of the museum is my favourite. I love how they did the lighting--it almost makes you feel like you're under water. Here are some pictures of everybody posing with the megalodon model: 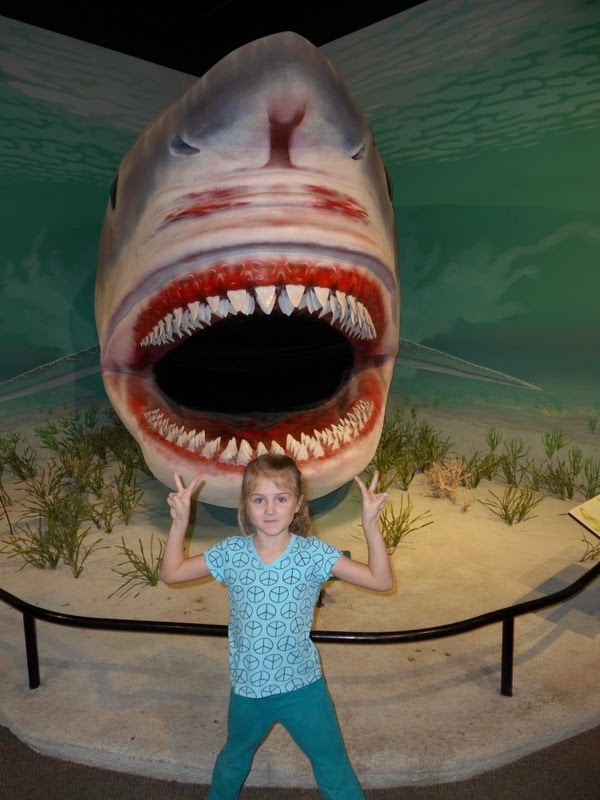 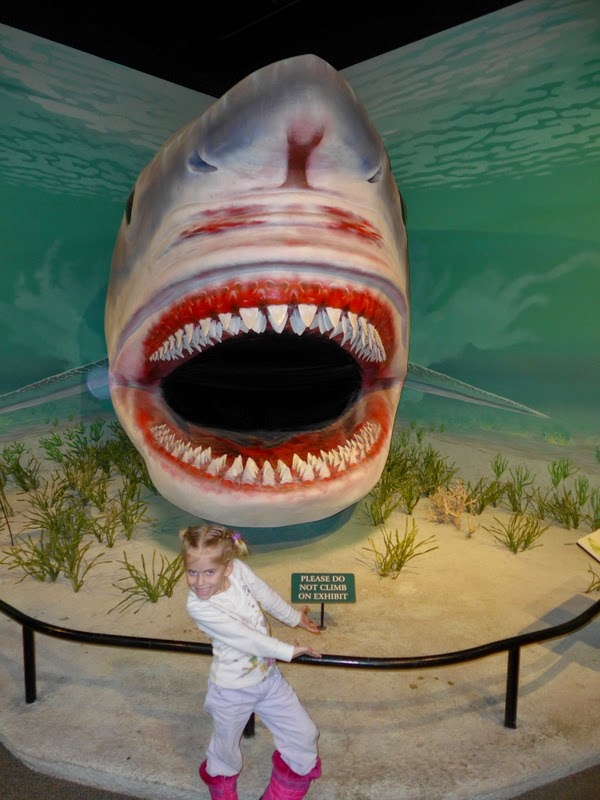 My dad stood beside it and said in his best sharky voice, "Name's Bruce!" which is funny because my dad's name is Bruce. 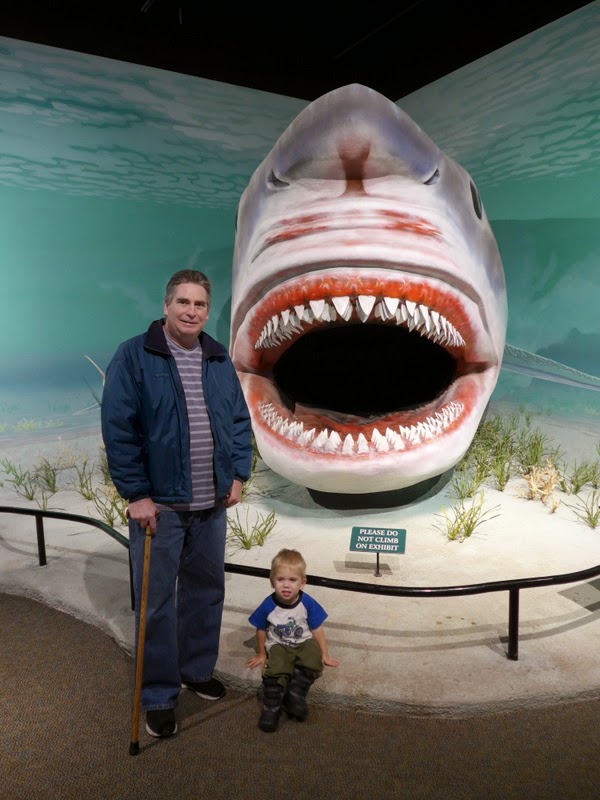 Benjamin was so funny about my dad's cane. He didn't think my dad should have it at all and kept taking it away from him and "putting it away." He seemed to think it belonged in some exhibit, rather than in my dad's hand. It was pretty funny. 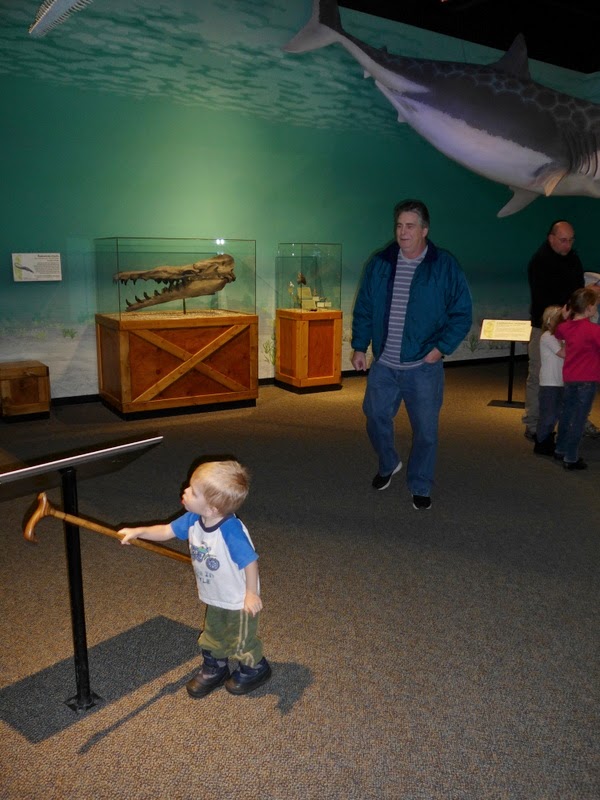 We made it just in time for the garfish feeding. The worker called out for anyone around to come and watch the feeding. Only one other family was in the area with us and their little boy was so excited because he has fish at home, too!

The worker poured some live goldfish into the tank and the garfish started hunting. 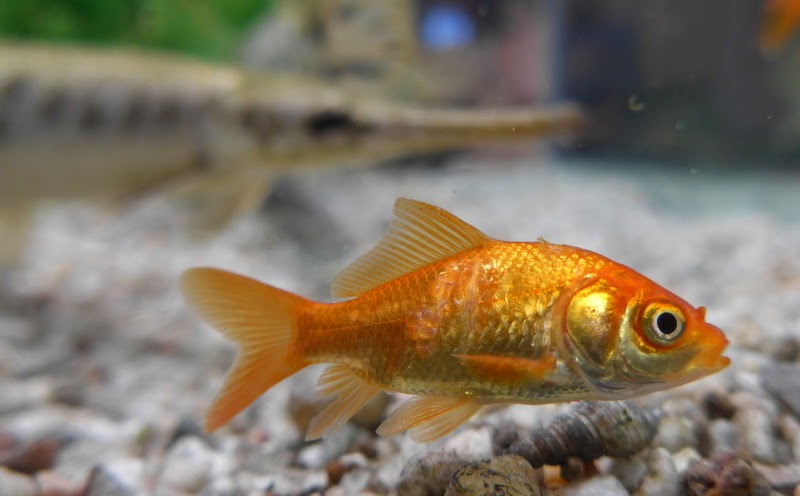 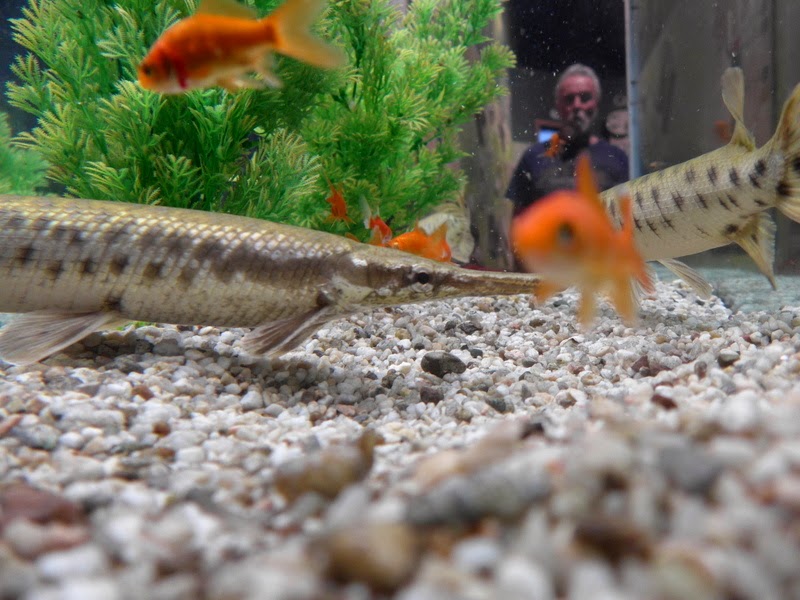 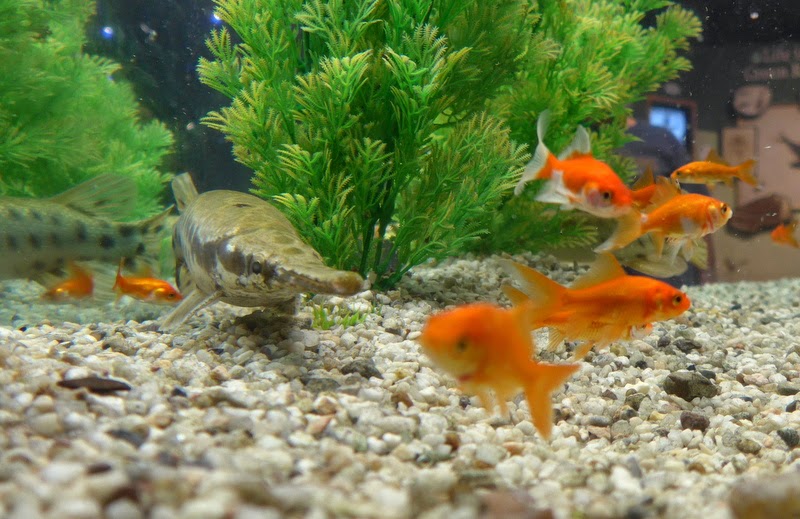 When the first garfish snatched a goldfish, the little boy gasped, "But it's eating the goldfish!" 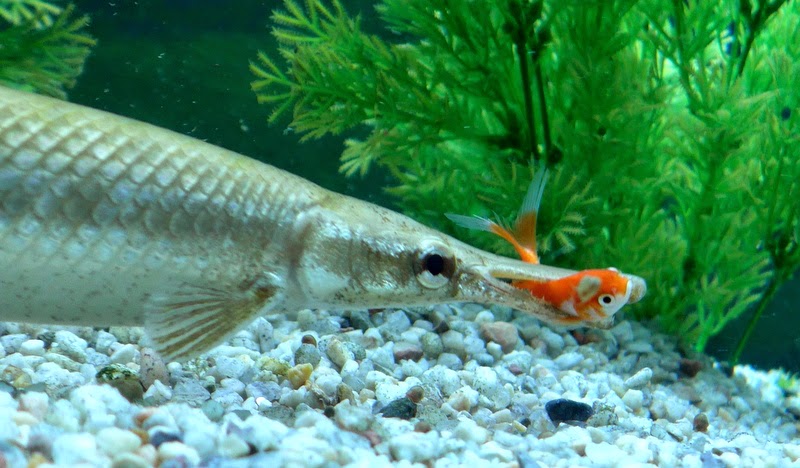 "I guess I should have warned you," the worker said. "They don't eat fish food."

"This is a lesson on the food chain," the boy's father said. "It's the circle of life."

It was pretty fascinating to watch.

Our last stop in the museum was at the excavation pit, where the kids get to use brushes to remove sand from dinosaur "fossils." 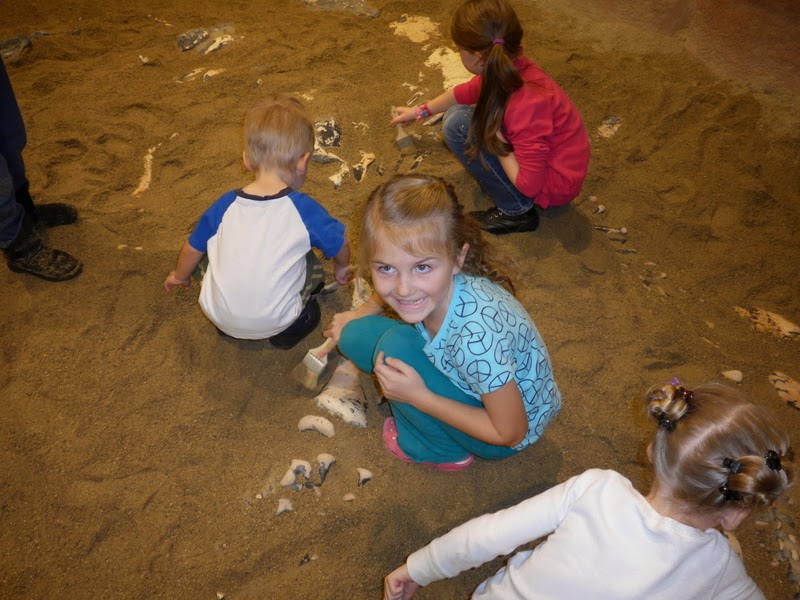 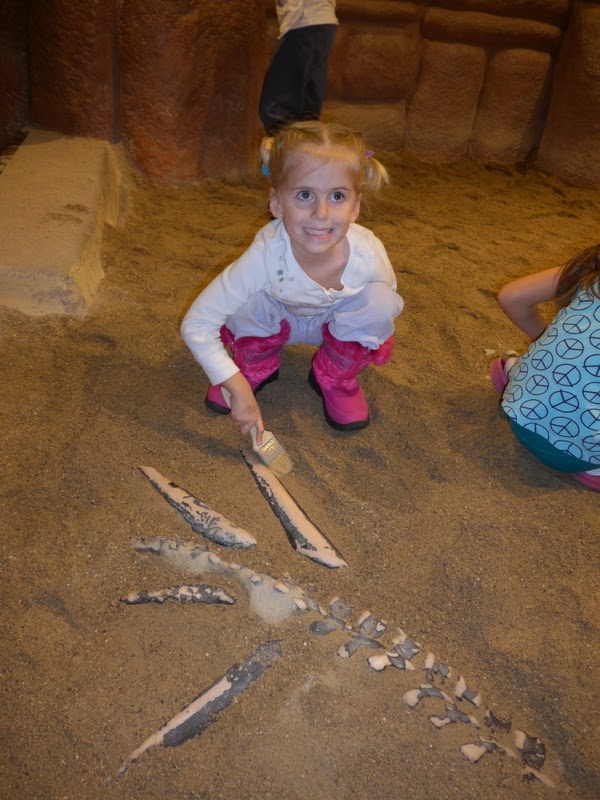 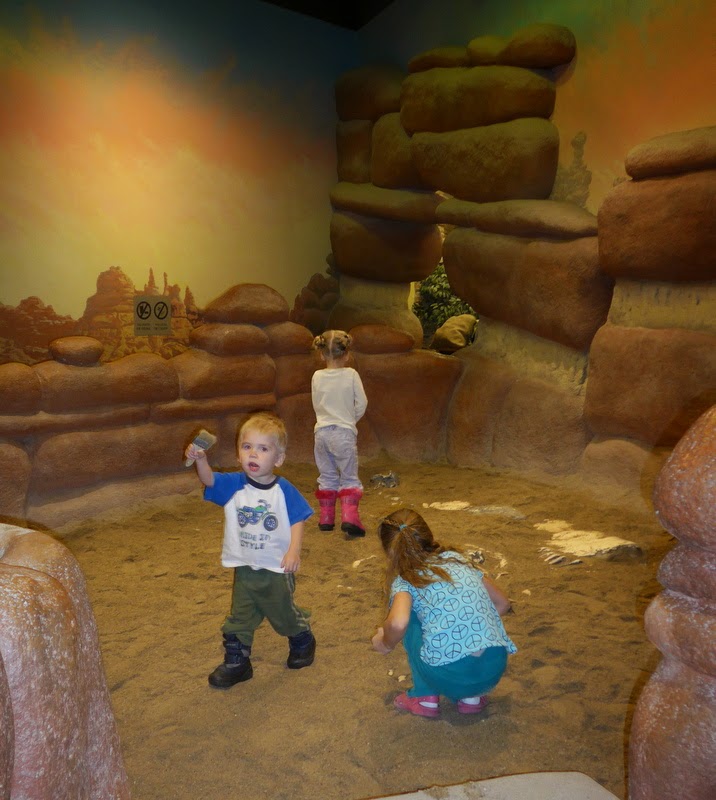 Oh, I forgot to mention that when we arrived at the museum and while I was busy chatting with Courtney, Andrew went up to the desk to get us admitted to the museum. He whipped out his card and handed it to the attendant. She looked at it, smiled, and said, "This is neat. But do you have one that's not expired?"

Andrew looked at the card--the same one that we'd used to get into Discovery Gateway the week before--and noticed that it had expired in 2013!

We'd just gotten our 2015 cards in the mail before he left to come out here and he meant to bring them so that we could use our cards the whole time, thinking our 2014 cards expired at the end of December. But all he had in his wallet was a card expired in December 2013! Fortunately, I had a card for 2014 in my wallet--and it doesn't expire until the end of January 2015 so we were still just fine for the dinosaur museum and for the rest of our trip. It would have been far more embarrassing if I hadn't had a valid card on me!

Here's a picture of the girls in the lobby just before we left: 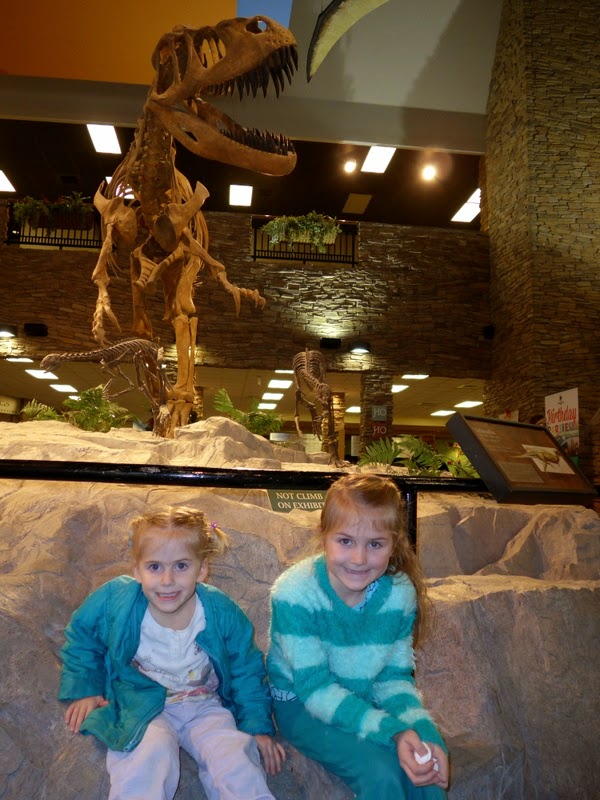 And here's a picture of everyone except for Andrew (because he was taking the picture): 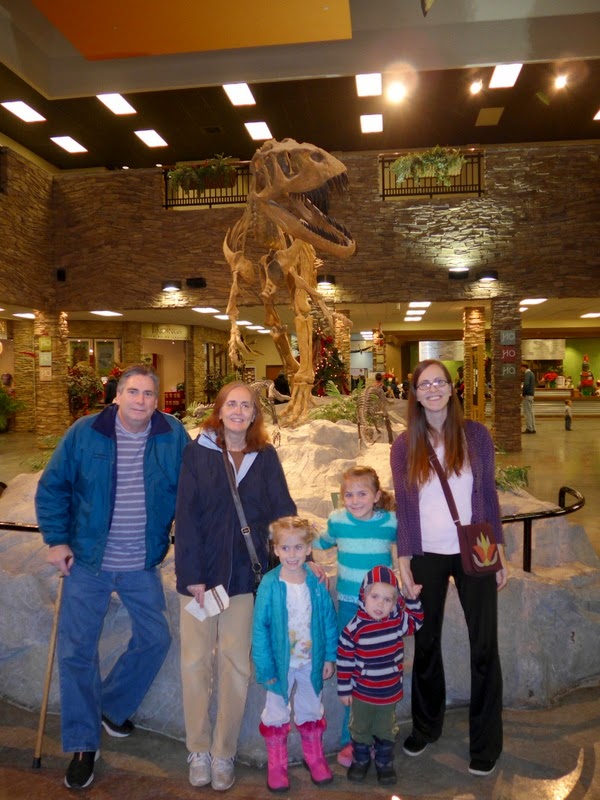