We may not have Benjamin sleeping through the night yet but we do have him trained to come quietly into our room and lie down on the floor. He used to wake me up and then cry about not being allowed in the bed. But I just can't be kicked from the outside while I'm being kicked from the inside. I just can't. So on the floor he goes. 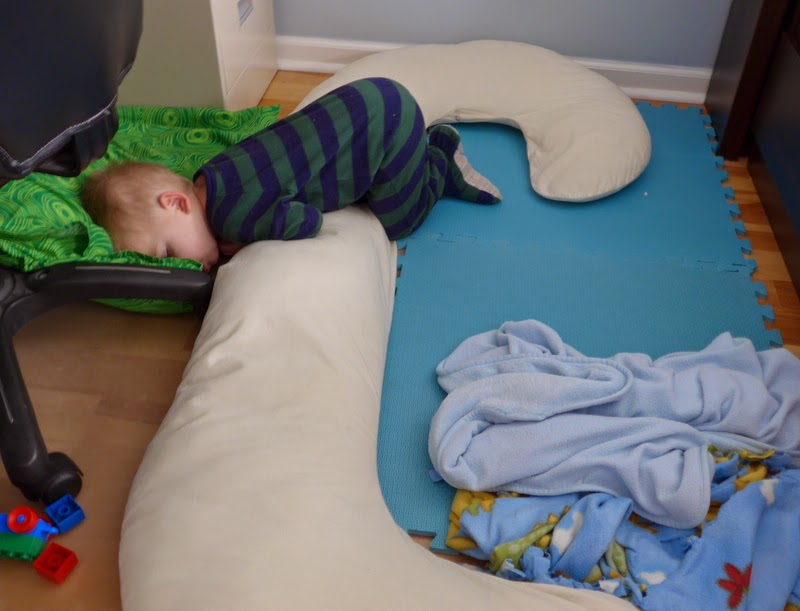 In theory he's supposed to sleep on that blue mat and the maternity pillow (which my friend Melissa gave to me because she doesn't need it anymore, but which I tried and didn't like as much as just my regular ol' body pillow) is supposed to keep him from rolling off said mat (he calls it his "nest" or his "puppy bed" depending on his mood). Obviously it doesn't work out like that in real life and he ends up either banging his head on a piece of furniture or sleeping on the hardwood floor, so I usually have to get up in the middle of the night to make adjustments to Benjamin's bed (such as lifting his poor wee head off the hardwood floor and wedging a pillow under it as I did early this morning).


I had an OB appointment today and almost started crying in the doctor's office. I've become one of those patients who tells my doctor everything. Everything.

Like, "I started having Braxton Hicks contractions strong enough to take my breath away. But not all the time. Just usually at night. Or when I really have to go to the bathroom. I'm not worried about it at this point because I'm actually having fewer contractions than I had in my previous pregnancies. Maybe because of the 17P shot? I dunno...I just thought you should know."

Or, "I feel pretty okay today but usually there are a couple of days a week where I can hardly lift my legs because my pelvis hurts so bad. But it doesn't feel like the baby's low; it's not that kind of pressure. I just thought you should know because I had a lot of pelvic pain with Benjamin and I didn't think much of it because everyone just said 'every pregnancy is different' and 'boys carry differently than girls' but what it really felt like was like I had a head between my legs. Because apparently I did. But it doesn't feel like that this time. At least not yet. But I just thought you should know in case it's a problem...I dunno."

And, "I've been super tired and emotional lately. Like, I think I cried every day this week. I just wake up in the morning wanting a nap. And I don't know if it's the shots or what but I'm just out of control emotionally, which is weird because I'm usually pretty okay after the first trimester."

My doctor this time around (we rotate through everyone who practices at the clinic, in theory) has an eight-year-old, a five-year-old, and a two-year-old at home and I almost asked her if she just wanted to be best friends because we had such a nice chat. But I didn't because that might have been weird.

She said that my uterus is probably a little more relaxed than it was with my other pregnancies because of the 17P shot, because that's what it's supposed to help do, but that it probably just gets irritable at night because it's tired of fighting gravity. Five contractions in an hour and she'd like a phone call. She also recommended a support belt, just because, "Four pregnancies is a lot." (She also asked if I'd always wanted a large family, which gave me pause because where I come from "large family" and "four kids" would never be put together in the same sentence).

She wanted to know how much rest I get, so I mentioned that Benjamin still wasn't sleeping through the night but that we'd recently trained him to just sleep on the floor instead of climbing in bed with us and she said, "Oh, I hear you. When I woke up this morning with my two-year-old's feet in my face I thought, 'It's time to try to get you to sleep in your own bed again.' I have the toddler bed in my room and everything but I cannot get them to stay there. They were just sick, which kind of puts you back in square one every single time, you know?"

She asked if I was getting a rest during the day as well so I told her that Benjamin usually goes down for a half-hour to an hour every afternoon, so I take a nap then as well.

"Your seven-year-old is at school?" she asked. I nodded. "And your five-year-old is..."

"Yes," I admitted with a sigh.

"No sighing. Doctor's orders. If you're getting up with a two-year-old at night you need a nap during the day," she said, and then whipped out her imaginary prescription pad. "If you want I will even scribble out a prescription: 'Take 1 hour of cartoon time, once a day, or as needed.' And how are you dealing with your emotions?"

"Well, napping helps," I said. "I think this week was especially hard because my husband wasn't home for dinner or bedtime at all. But he'll be home tonight, so..."

"Just looking for the light at the end of the tunnel helps?"

"Being at home with kids is hard," she said. "I don't stay home with my kids during the day, obviously, because here I am. But when I do stay home with the kids, it's exhausting. I think parenting is like [reference to some show I've never seen], where you're hiking in the cold and the rain all day long and you finally get to camp and you fall asleep right there on a big boulder because you're too exhausted to actually set up camp and then you wake up two hours later, strap on your soggy boots, and do it all over again."

Anyway, everything went smoothly. The baby is measuring fine (this doctor actually measured my fundal height) and her heartbeat is great, though she kept kicking and moving so we had a bit of trouble finding it, not that it was a worry because she was moving all over the place so very obviously alive.

"I can hear your placenta," the doctor said. "I just want to get a good listen at the baby's heart..."

I didn't even know you could listen to your placenta. But apparently you can, which I guess makes sense. I've just never had a doctor come out and say, "That sound is your placenta, not the baby's heart."

So, I'm supposed to just keep on keeping on, including being mindful of the number of contractions and pelvic pressure and everything else that I've ignored in all my past pregnancies. Because sometimes I've been known to accidentally ignore preterm labour (until I started gushing blood—that part was kind of a red flag, but if that hadn't have happened I don't know when we would have gone into the hospital).

Fortunately, my chances of going into preterm labour while on the 17P shot are lowered significantly, but unfortunately every little thing sends me into panic mode.
Posted by Nancy at 10:47 PM