I've been doing quite a bit of crocheting lately, so much that Andrew remarked, "It's like you're nesting...but without standing up."

I've made multiple pairs of booties and I even broke out the blanket I started just before Benjamin was born (thinking I still had two months to complete it—ha!) but never finished (I will finish it before Zoë is born). My most recent project has been a dress for Zoë. In theory it was going to be her coming home outfit but once I started working it up it became rather clear that it's not going to fit a newborn. Zoë will have to grow into it.

I found a free pattern on this knitting/crocheting website. It's literally just a scan of an article from an Australian newspaper dated 1888. It was quaint—they called it a petticoat—and used easy enough stitches that it gave me enough confidence to break away from the usual hats/booties/blankets that I make.

In order to work the pattern, though, I had to translate it from British to American terms (why can't we just agree on which stitch is which) and rework a few more things that simply didn't make sense to my brain. Oh, and I used remnant yarn that Andrew's aunt gave to me back when Miriam was toddling around so I had to throw some stripes in. I thought that the yellow I grabbed would easily work up into an infant dress...but when it ended up looking so big I knew I needed to make some adjustments.

Anyway, I finished it tonight! 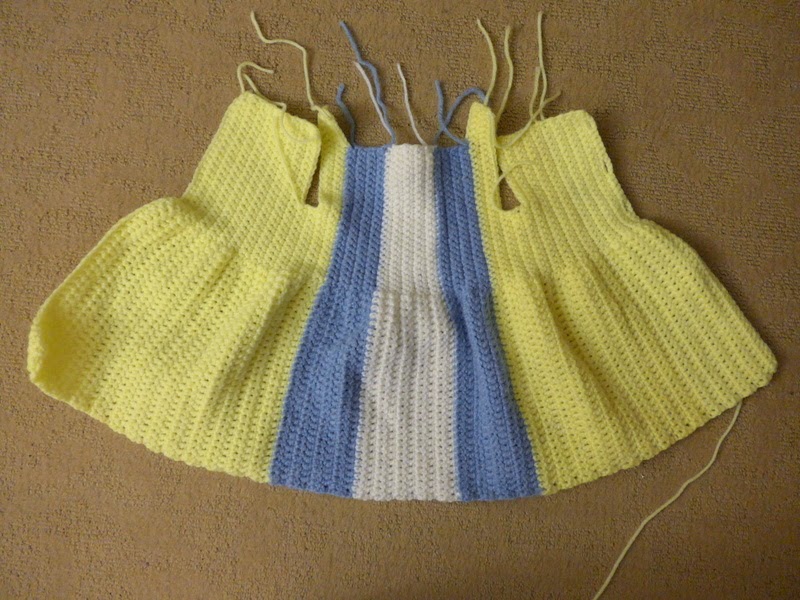 Well, almost. I just need to sew it up and add a border and then I should be finished for real. Here's what it'll maybe sort of look like when I'm finished: 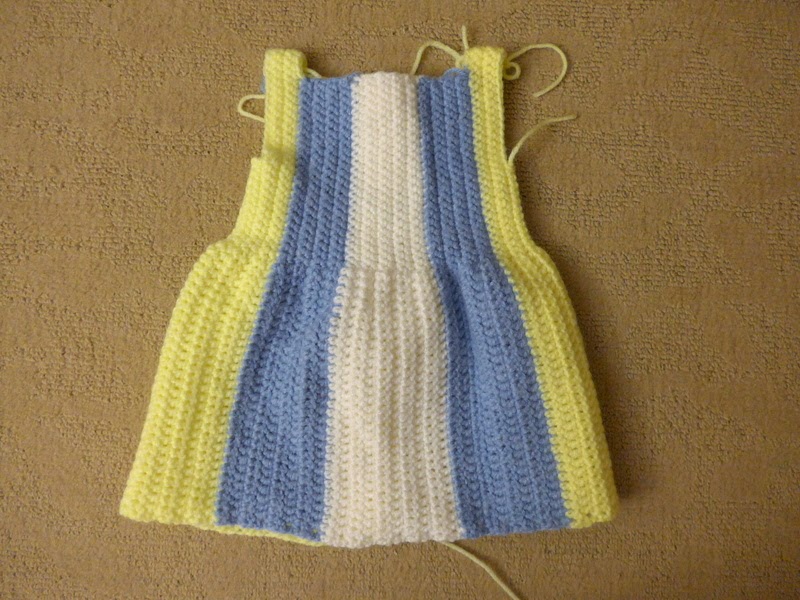 I'm not going to finish-finish it tonight but...I made a dress. How crazy is that?

I've been crocheting so much that my little crochet basket has gained a permanent spot by my desk and my chair has become home to my works-in-progress that don't fit in the basket. I've worked up two little pairs of booties from the blue/pink/white yarn and I'm planning on making a necktie as well. I'll keep one pair of booties, send a pair to Auntie Em for Maren, and send the necktie to Auntie Sarah for Baby Boy (whose potential name I know but have been somewhat sworn to secrecy). That way all these little cousins can have something matching to wear.

The booties have been hanging out in my chair along with some skeins of yarn. Because I'm organized like that. 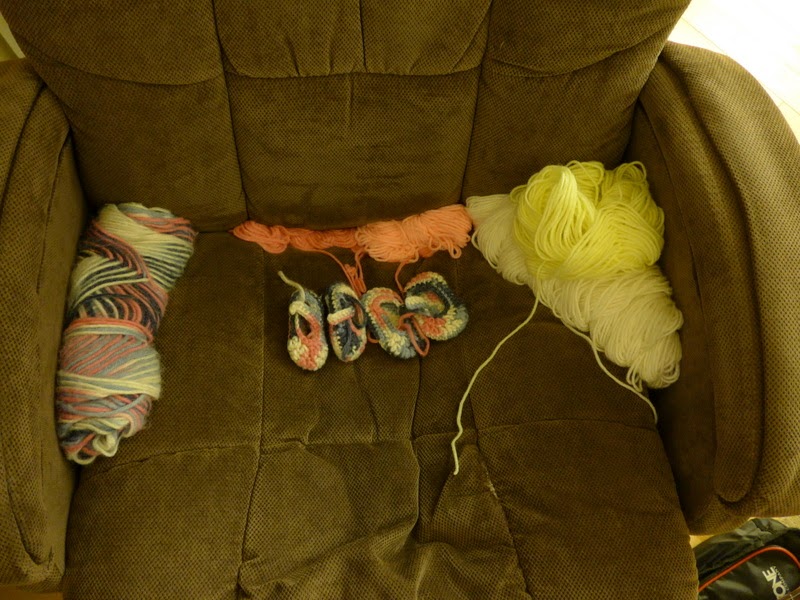 I got up from my chair this evening and walked into the living room. Andrew started laughing and said, "Hey, you have a, uh, little bootie on your booty."

I was wearing pants today that had flaps on the back pockets, secured with velcro tabs. One of the velcro tabs had picked up a little stowaway from my chair.

Andrew had a hard time recovering from his little joke. He was laughing so hard. And, to be fair, it was pretty funny.

In sadder news for my booty, my shot didn't go well this week. I thought it would because my nurse was all proactive. She instructed me to lean against the table and put my weight on my right leg, to take a deep breath in, and...and then she just jabbed me!

My brain was screaming, "Z-track method!! Z-track!" but I didn't say anything because it was a little late to change things. The needle had already been plunged into my rear end.

There was absolutely no "downward pulling on my skin and subcutaneous tissue" at all. She just jabbed me. So this week's fiery butt dart is feeling extra fiery; it's going to be a fun couple of days. And to think I had thought things so promising when she instructed me to put my weight on one leg...
Posted by Nancy at 11:27 PM