We've officially used up all our snow days, so today is our first snow day that wasn't built into the calendar. How we'll make that up (and the next couple that are surely coming down the pike) is yet to be determined.

At least we had a beautiful day (47°F!) to play with instead of being cooped up or out in the cold!

The kids spent most of the day playing outside after they managed to get dressed appropriately. Miriam had a tough time getting ready to go outside. She put on one pretty dress after another and I kept telling her to go back and change into something that could get muddy.

Finally she emerged from her room wearing a super old play dress that we grabbed for Rachel at a trading tables event years ago (so has been through at least three children, though I would guess more) and a pair of leggings (that came into our possession through similar means) that already had a small hole in the knee.

"Mom, these are old enough that they, like, have holes in them," Miriam said, coming out into the living room and twirling so I could see what she was wearing.

And that's where they stayed for hours.

We even had a picnic on the back deck. It was just that beautiful. The only reason Benjamin is wearing a hat is because he has been waiting for his turn for days but one of the girls is usually wearing it (because, as you can see, it's a little too big for him so he gets stuck with a smaller hat and one of the girls wears this bigger one). 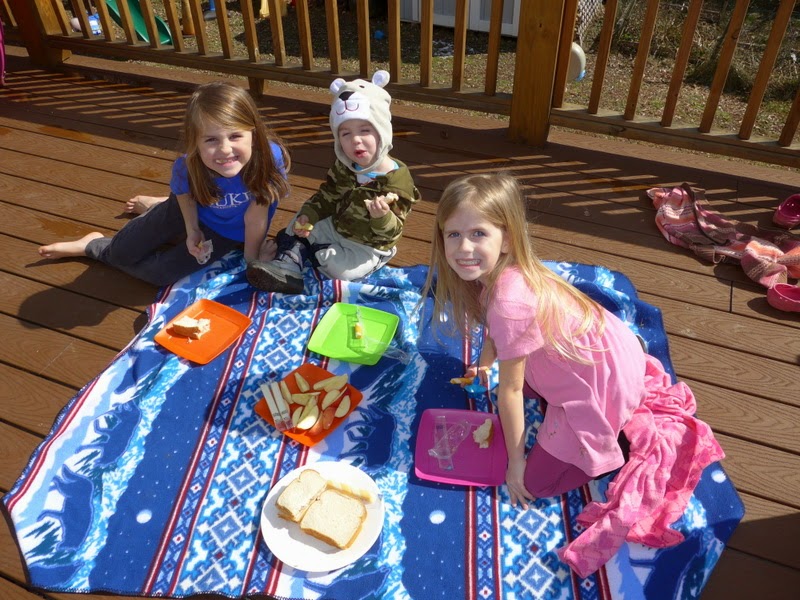 During lunch it was proposed that we go to the park.

"Can we go to the purple slide park?" Miriam asked.

It's not like it's terribly far, but it is quite the walk through the woods, which was a bit more of a commitment than I was willing to make at this point in my life. Andrew took the van to campus because we really do have a storm system moving in today (though they haven't cancelled school for that yet...they were bold enough to call a full day off school by 4:00 yesterday afternoon for today of all days when there was nothing alarming in the forecast at all). 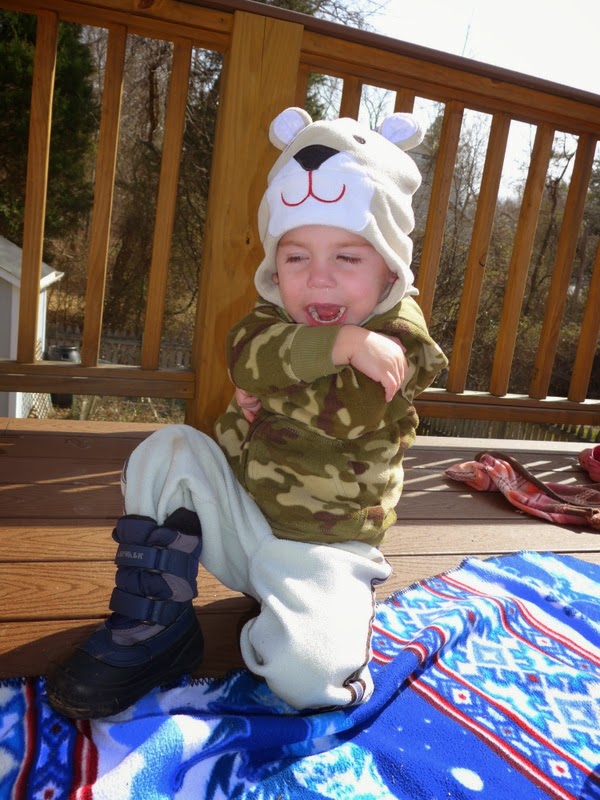 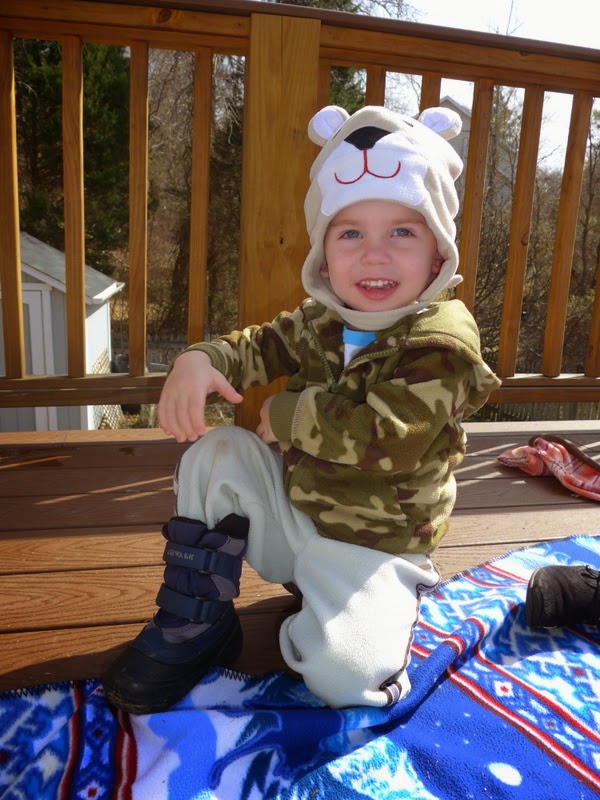 So we went to the tan slide park and played for a few hours. The girls rode their bikes and I pushed Benjamin in the stroller. He insisted he was going to walk the whole way until we got around the corner of our street and then he was begging for a ride.

While the kids ran around like wild, I sat in the sunshine and read my book.

We snapped a few pictures before we left, just so we could show everyone how badly we were snowed in today. 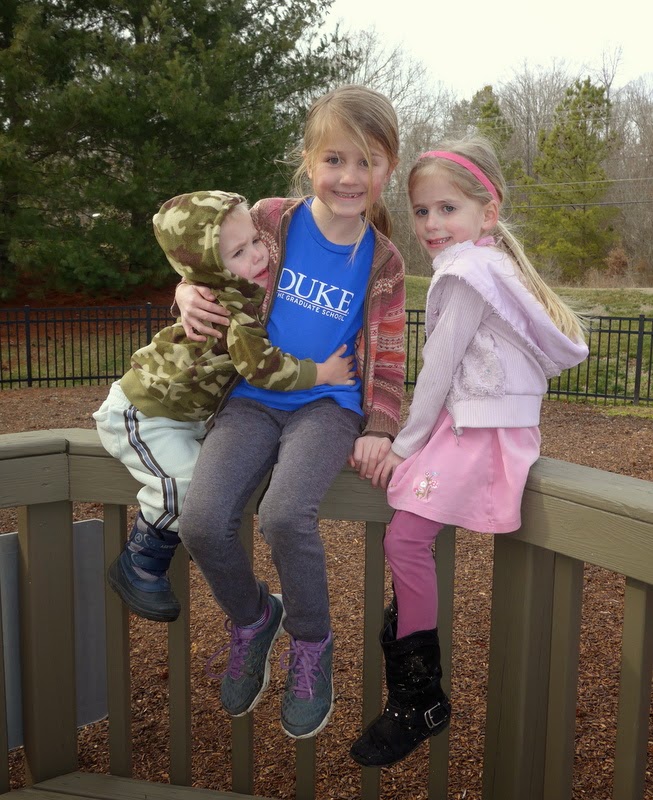 We even managed to find some snow that hadn't melted yet—the horror! 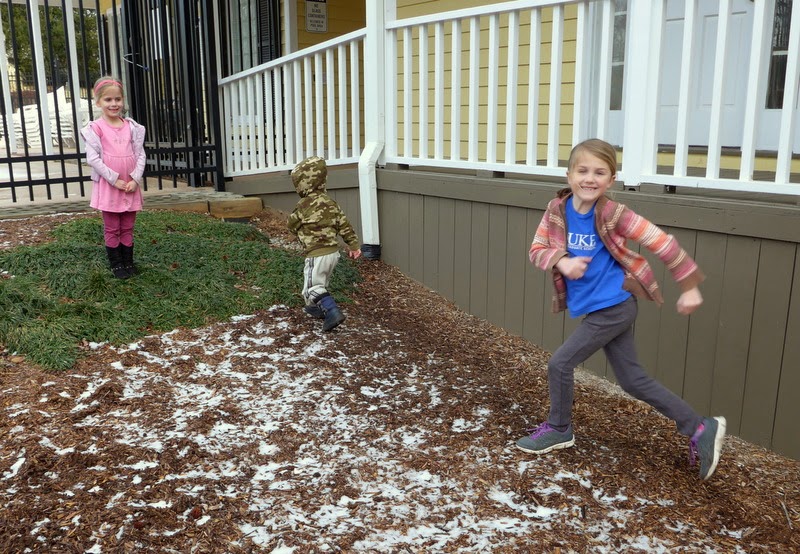 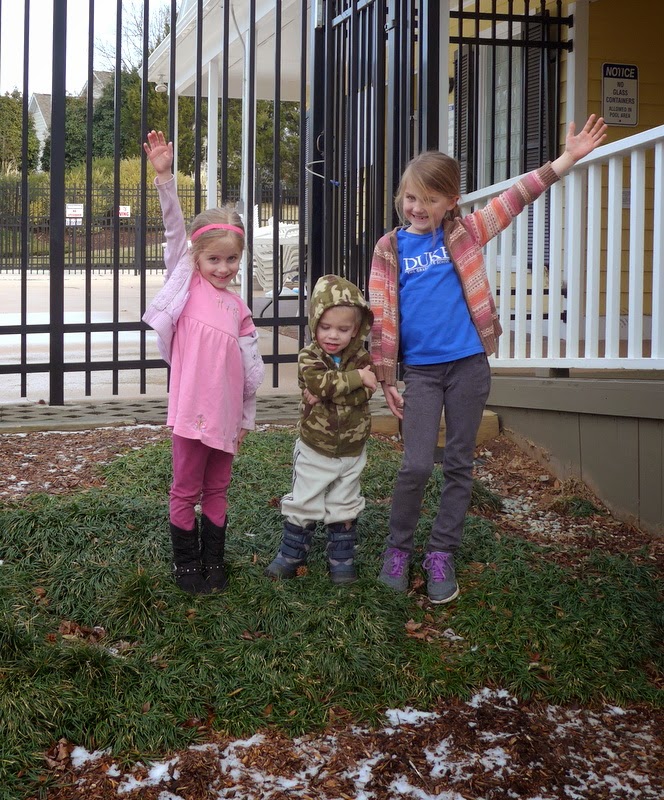 And then Benjamin decided he should probably get to swing before we left for home. 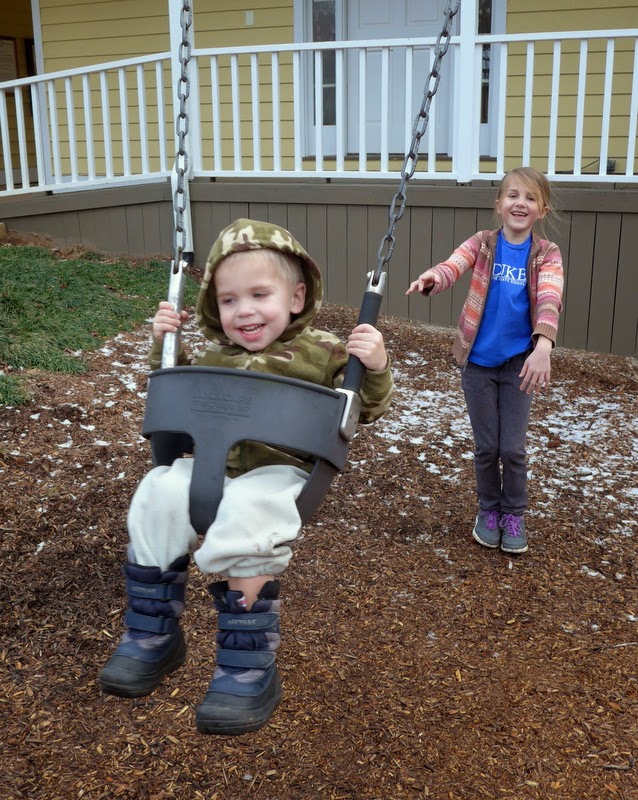 Miriam just wanted to rest for a while... 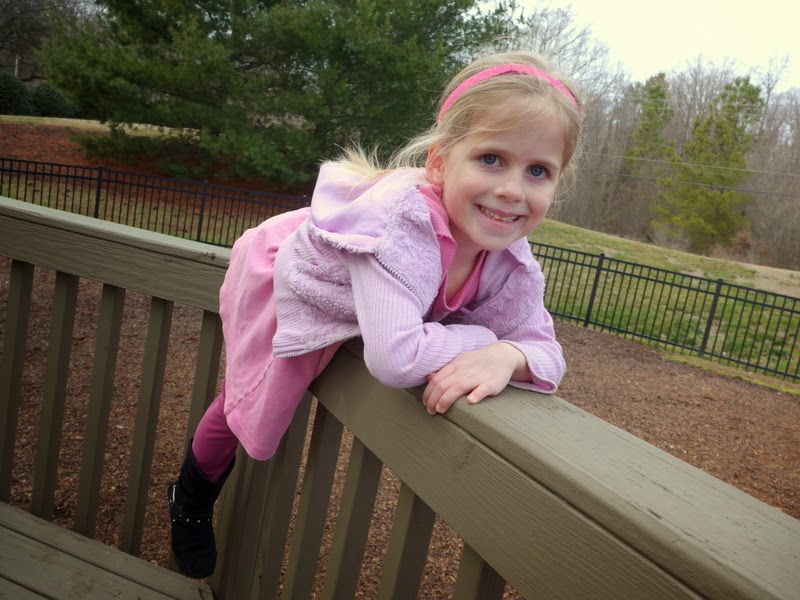 ...but in the end she couldn't resist the call of the swings. 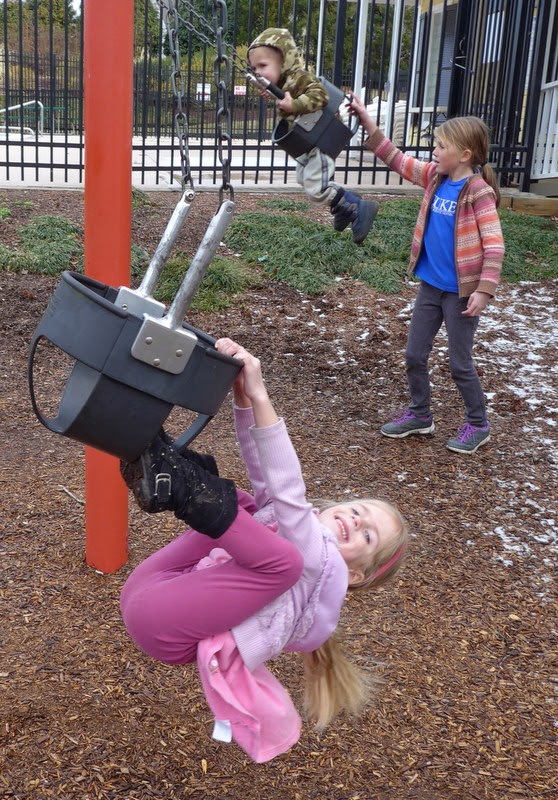 The walk home was a little chilly, but we survived. Miriam wasn't sure she could make it up the hill on her tricycle so Benjamin and I walked right behind her and Benjamin put his feet against the back of her tricycle so we essentially pushed her up the hill. She pedaled, too, so it wasn't too much work.

The worst part was that we were stuck walking beside the garbage truck for a while, but the good news is that the garbage truck came! Last week they skipped our collection day due to snow and then kept skipping and skipping days until they decided to start fresh on Monday. So I don't think anyone had their trash collected last week. It was nice to get that taken care of. We were in fine shape, really, until Andrew put his mangled suitcase inside our bin, but some of our neighbours' cans were full to overflowing.

Since arriving home, we've mostly been playing dress ups. The girls were trying out some new pioneer duds we got from someone in the ward. Rachel was especially excited about this because the bonnet Grandma got for her in Nauvoo (nearly four years ago) has gotten too small. 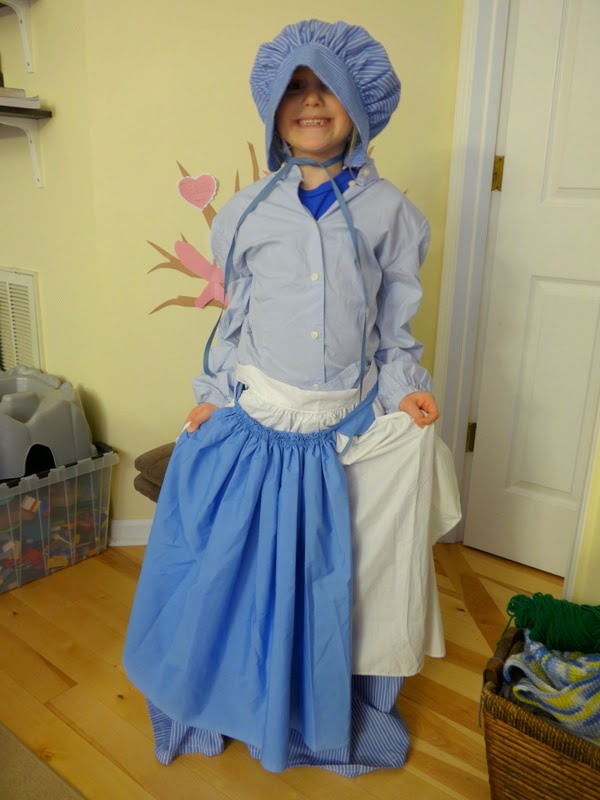 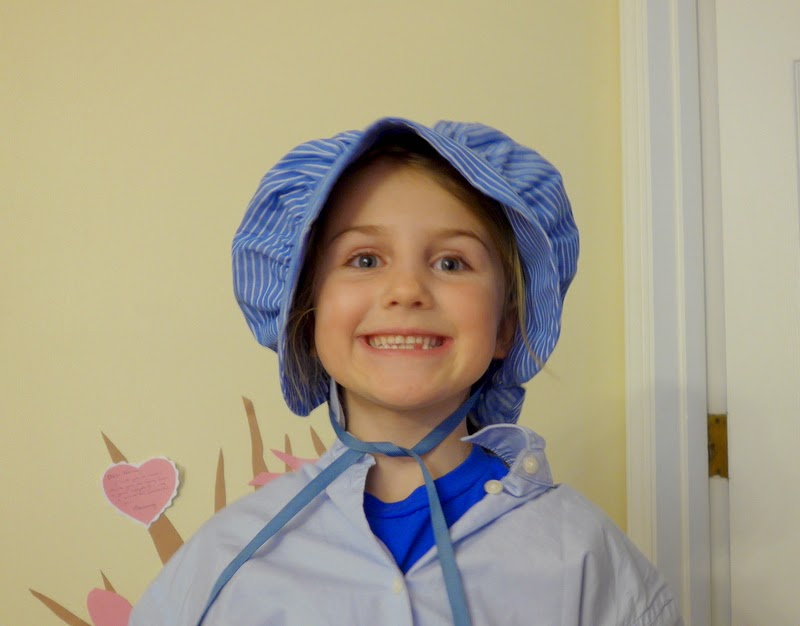 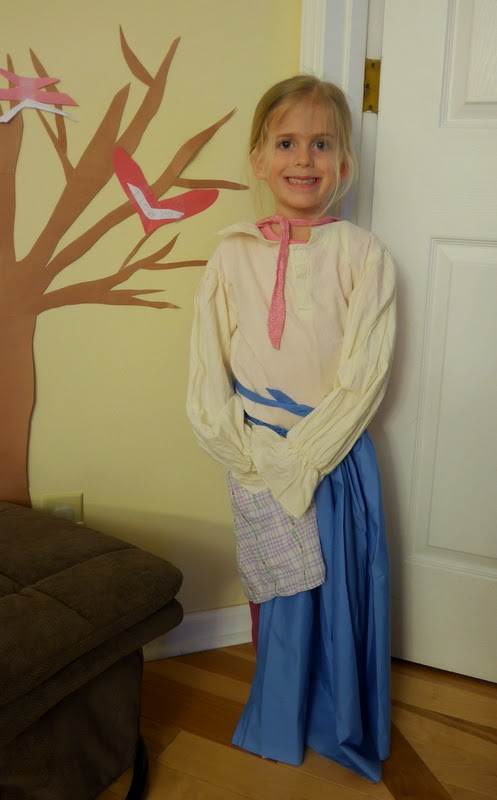 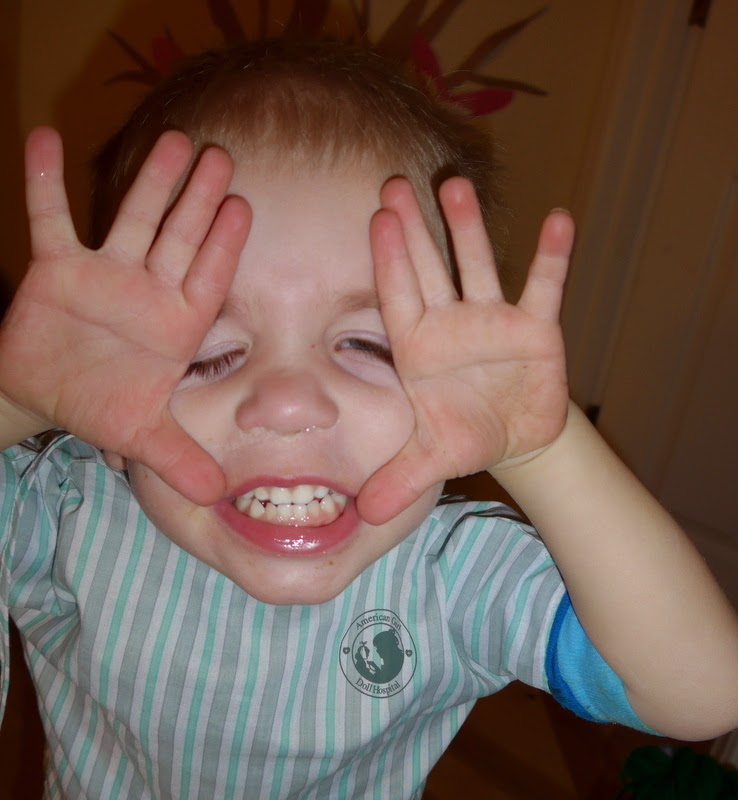 It wasn't too bad of a snow day, really. All it was missing was, you know—snow.
Posted by Nancy at 5:03 PM