Pretty much 100% of my knowledge of New Orleans comes from Disney's The Frog Princess. I'm going to guess that it's not entirely accurate information, given that people turn into frogs in that movie, but it is what it is.

Andrew, on the other hand, has been down to New Orleans a couple of times since we've moved here. Apparently it's a popular city to hold conferences in. Because that's why Andrew goes—not for Mardi Gras, even though this most recent conference lined up perfectly with this year's Mardi Gras celebration.

Due to last week's winter weather, Andrew had the option to change his flight to an earlier one (for free) or to risk having his flight rescheduled to a later flight, should his flight be cancelled. He opted for the earlier one because he had to be there to present a paper. So he changed his flight and was lucky enough to find another night in a hotel. He ended up staying in three different hotels, wheeling a broken suitcase all around the city as he was hotel hopping.

The first few days he did anything but conferencing. He read books and couldn't help but attend the Mardi Gras parade because his hotel was right on the parade route! He had to wear a special bracelet to prove he was a hotel guest (they were kicking out all the riffraff from the street, I guess). Here are a few more pictures he snagged of the parade: 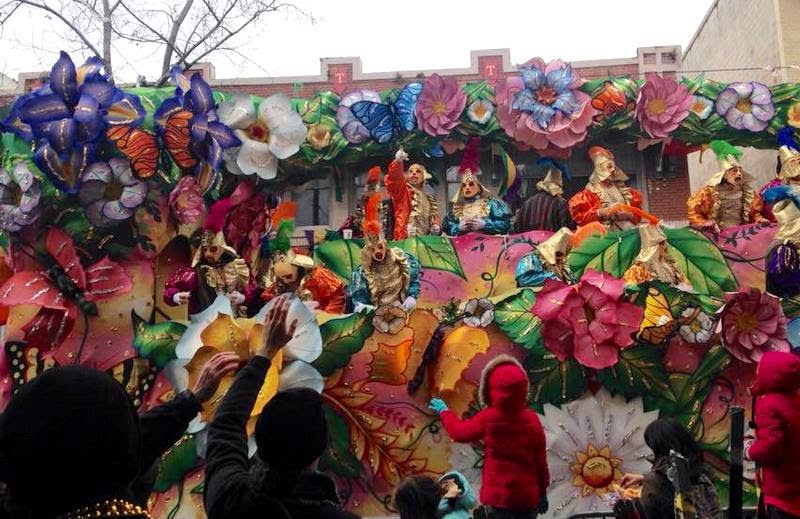 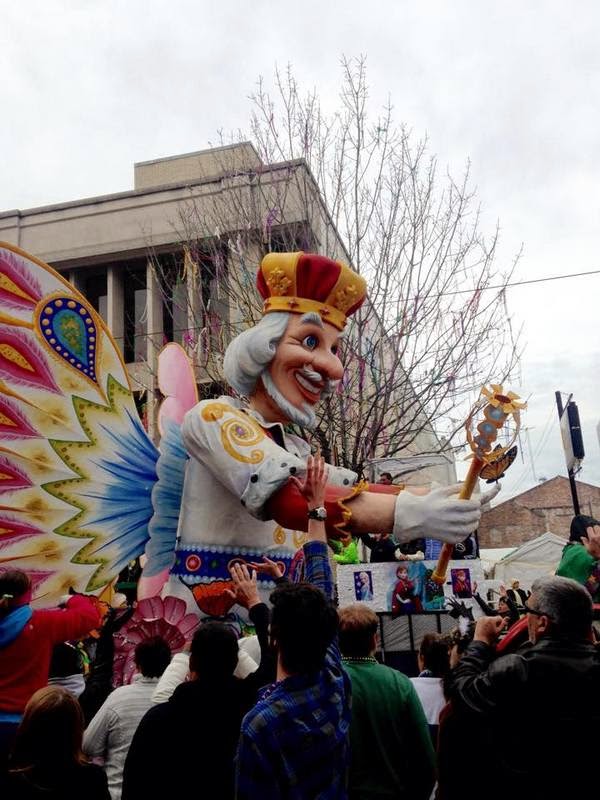 He said the whole city was partying hard. He said it was the weirdest bit of American culture he's seen to date.

He also sent me a lot of pictures of food, and I hardly cared this time because I was treated so royally by our ward.

Here's the beignet he got at Cafè Du Monde (a must-have in New Orleans, I hear): 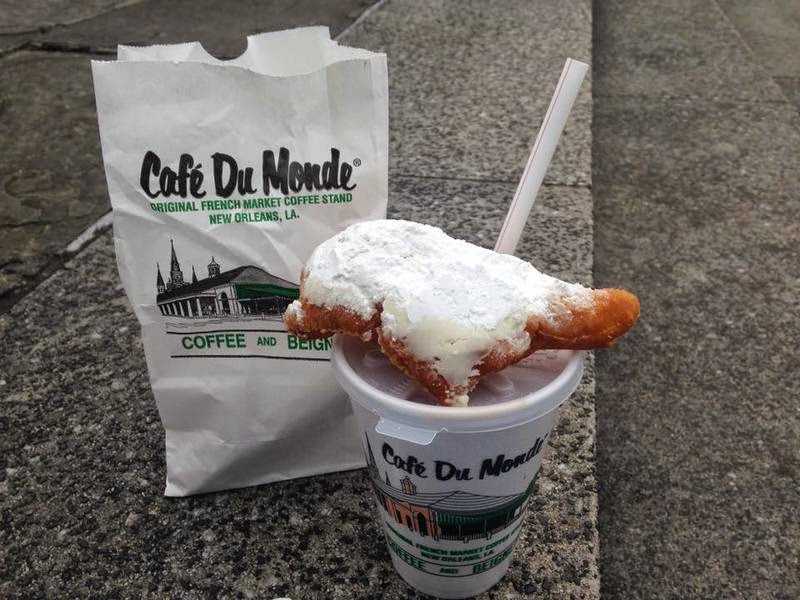 And here's a peanut butter burger he got at some place: 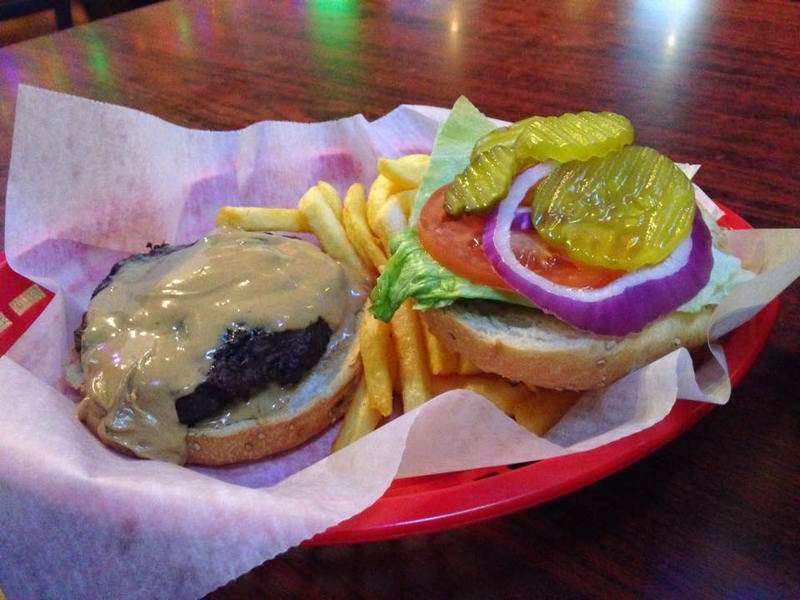 It actually has peanut butter on it. He said it was really good, but apparently they forgot the bacon.

He presented his paper on Wednesday morning and said it went over well. In fact, his exact words were, "Success. Nobody hated it, so that's good!"

When I probed him for more details he said that it was good, there were seven people in the audience, one was a political scientist from AUC (which was cool) and everyone had a lot of questions. I'm sure we skyped about it, too, but our skype sessions were, frankly, quite lame. My news was usually along the lines of, "No school, so sick, can't talk." The kids were unusually quiet, too, though they did have their moments of bouncing around in front of the camera.

On Wednesday night Andrew went to Ash Wednesday Mass at the St. Louis Cathedral, which is one of the oldest cathedrals in the United States (originally given cathedral rank in 1793): 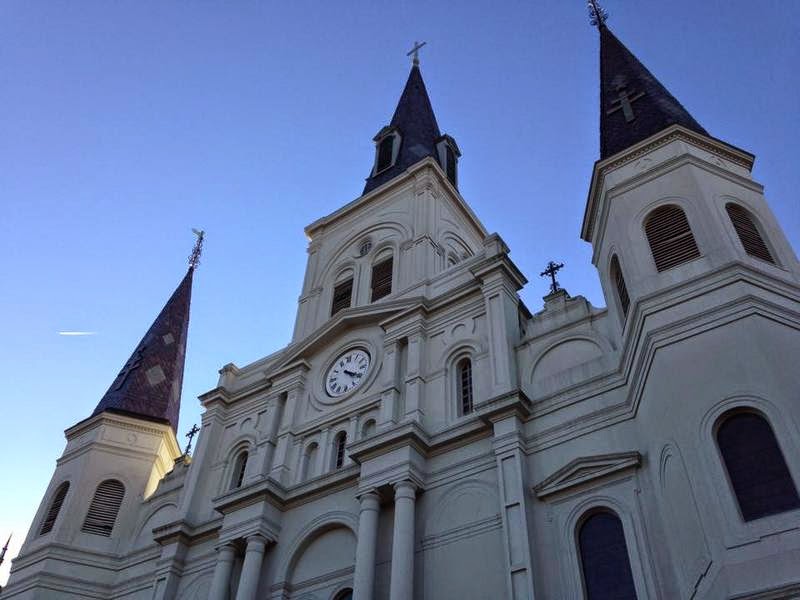 The rest of his time was spent conferencing it up. I'm glad he had a good time and that his presentation went well, but we were also certainly glad to have him come home! He brought a whole bag of Mardi Gras beads for the kids, though he didn't get a single one of them at the parade. Instead he was given them by a hotel clerk; they'd been left behind by a couple of international travelers who didn't have room in their luggage for all the beads they'd collected.

We haven't even counted how many he brought home. All I know is they've filled our jewelry box to overflowing so I made the kids weed through them today until we could shut the box again.

Here's Benjamin modeling some of the Mardi Gras beads: 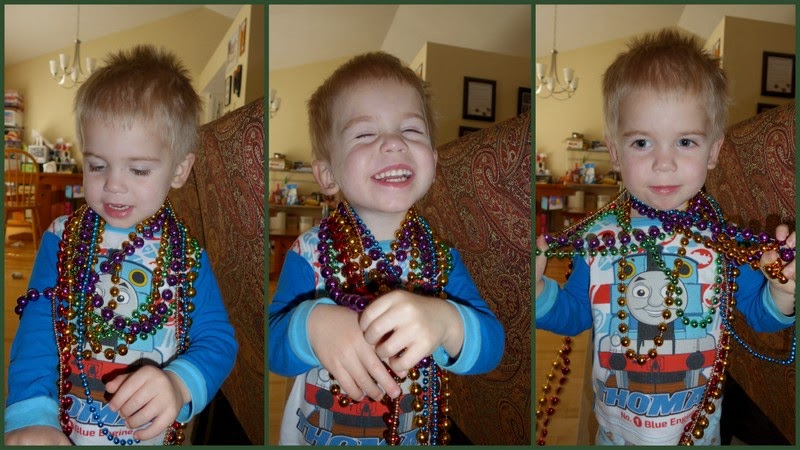 And that's my lame attempt at chronicling Andrew's trip for him.

It's not a very detailed account—since I wasn't actually there—but it'll serve as a reminder that Daddy spent a week in New Orleans when Mommy was 25 weeks pregnant with Zoë (which was far better than the three weeks he spent in Ghana when Mommy was 28–30 weeks pregnant with Benjamin (though we were living with Andrew's parents then, and my parents lived just a block or so away, which was convenient)).
Posted by Nancy at 1:09 PM