My comfort this week will be that Rachel spent twice as long in school than she did last week because she went the whole day on Monday. Last night I looked at the forecast and I started to see closures rolling in—not here, per se, but still. Andrew and I haggled over whether it would be a two-hour delay, and early-release, or a full day off for us.

When the alarm went off at 6:30 AM school was already on a two-hour delay, so we turned off Rachel's bus-rider alarm, and went back to bed. By the time we checked the news again school had been cancelled so we went ahead and turned off our alarm as well.

Not a flake had fallen from the sky when we dragged ourselves out of bed, but by the time Andrew left for school (at 9:30 AM) we could tell we were legitimately snowed in. 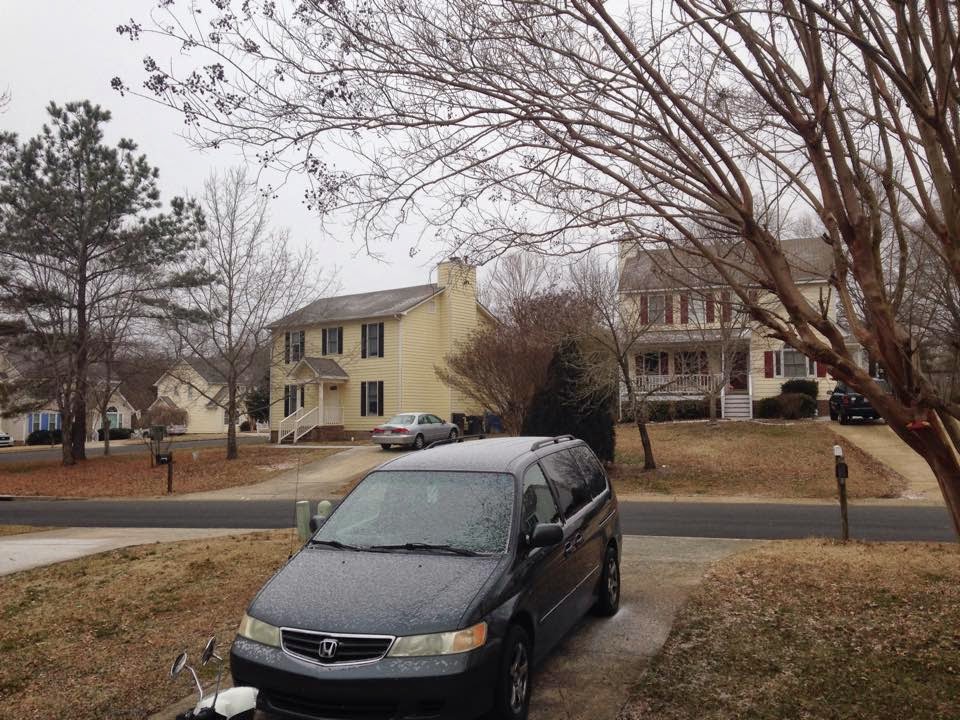 The kids were rather disgusted with the snow day announcement when they looked out the window and saw that, let me tell you. But lucky for them we did get a bit of a heavier dusting and I sent them out to play in the backyard for as long as they would stay out there (with subfreezing temperatures they did eventually get cold enough to want to come back inside but I bundled them up well enough to give myself enough time to regain some sanity while I cleaned up from lunch alone). 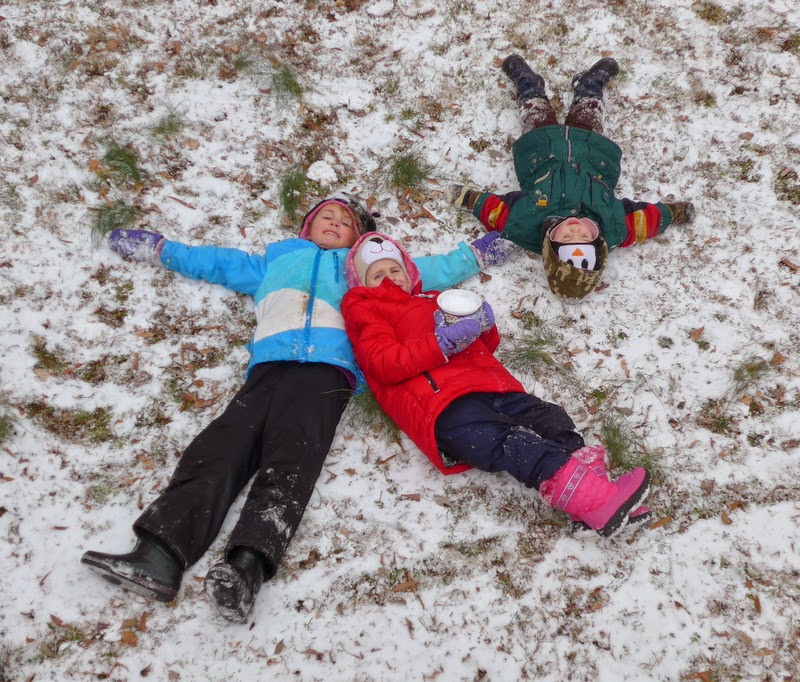 I took pictures of them from the deck before calling Benjamin in for nap time. He's been doing this silly thing at night where he screams and screams and screams that he wants his mom until I grab his face and say, "I am your mom," and then he's like, "Oh," and goes back to sleep. It's lame. And I made the mistake of making Andrew try to fix it, which only made it worse. So Benjamin definitely needed a nap this afternoon.

Here's Rachel being a goof: 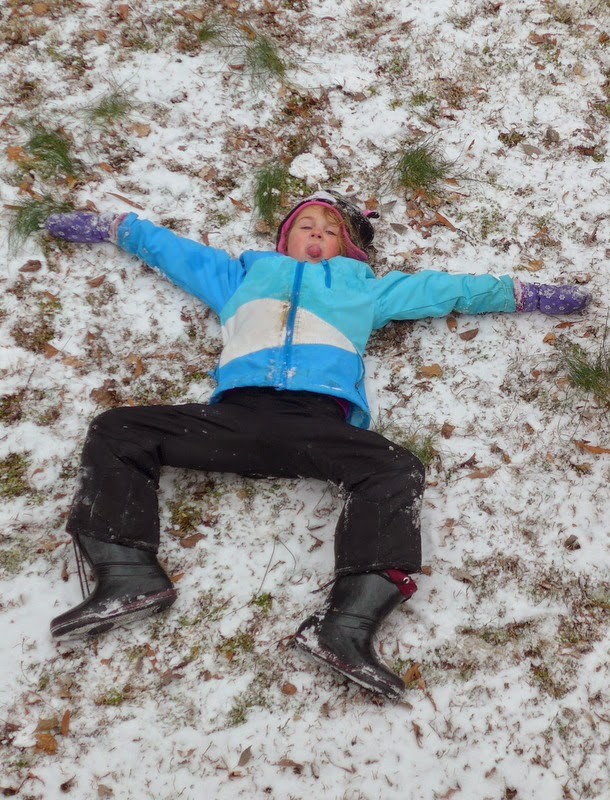 And here's a picture of our driveway after today's storm was finished with us: 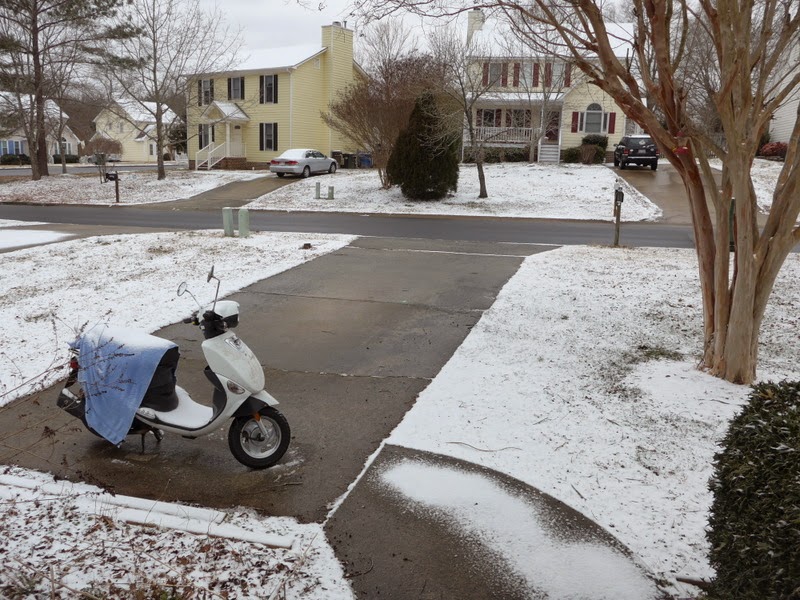 So it's a good thing they cancelled school! And, thank goodness, they've cancelled school for tomorrow as well (and probably the rest of the week) because we have a big storm coming in at 8 PM. It only makes sense to cancel school for the whole day because, as you can see, the roads are minimally wet and as it gets colder that wetness will turn to ice, which is slippery. We'd need at least a two-hour delay for that. But then with this storm coming in—at the same time that most kids are already in bed, mind you—we have to start bussing home early as well (so they can be home hours before the storm hits). With a two-hour delay and an early release there's not much point to going to school at all, is there?

It's okay. They just don't have the equipment to handle this kind of weather so we can't blame them for freaking out because in the north we have snowplows running all the time, right? Wrong. Dudes—we have standards.

It's pretty easy to find the snow (and ice—because that happens in the north, too) removal policy for any given northern city. I'm sure that southern cities have them, too; if they don't they should! Raleigh's got one, but I can't find one for Durham to save my life. Interestingly enough, Salt Lake City has about the same number of snowplows as Raleigh, though it has roughly half (44%) of the population. So there are more snowplows in the north but, uh, they also get a ton more snow (Salt Lake City averages 56.2 inches of snow annually while Raleigh averages 3.9 inches).

Anyway, I would be driven less crazy by this if there was any rational thought behind it—and maybe there is a little—but from my perspective it seems to be a weird superstition of the south. Ice is dangerous, but other things are, too (like rain) but they don't care about that at all and in fact brag about how well they handle hurricanes—even this far inland where we haven't really been hit by anything since Hurricane Fran in 1996! So I wonder how their walk compares to their talk.

Are residents of Durham really all that calm, cool, and collected when they're actually threatened with being hit by a major hurricane? Or do they just not remember whether they are or not because in 1996 they were, like, ten years old and they can't quite remember how things went down?

Like camping trips that are so much fun until you're the grown up doing all the packing and planning...lots of things were better when I was ten. Not that my family ever went camping. But I know that when I've gone camping when Andrew's mom is in charge it's a lot more fun and carefree for me than when I'm in charge!

Ice is, I swear, the colpo d'aria of the south! But that's okay, South. We'll make it through this horrific winter together (and then will spend all our glorious spring at school).

And because these snow day posts are getting old, I hereby promise I will stop complaining about snow days when it actually snows. That means I'll probably complain again tomorrow. But, I mean, if you're getting sick of me writing about snow (or the lack thereof) think of how it feels to be "snowed in" by...nothing. It's much more annoying than simply writing about it.
Posted by Nancy at 10:47 PM