I realize you're used to winter weather only being around for a day or two and then disappearing completely for a while until it decides to rear its ugly head again. But we've already missed five days of school this season and here's the forecast for next week (temperatures in Fahrenheit): 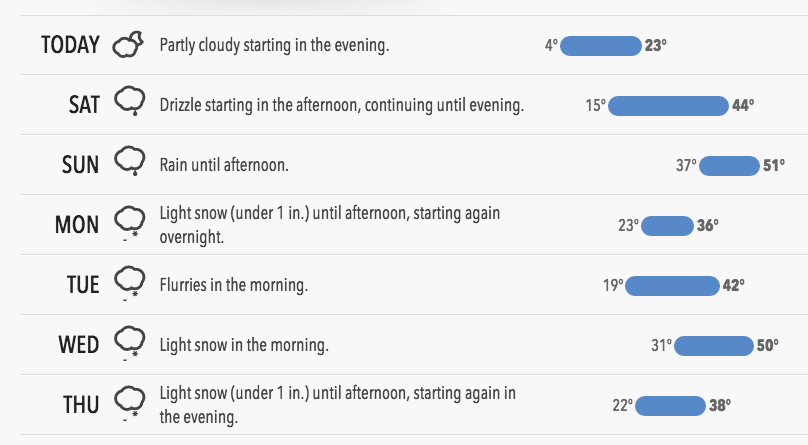 
That's your problem. You don't have a plan. You sit around waiting dependable Mr. Sun to make everything right again, which is usually fine except that this year Old Man Winter is being a little more obstinate than usual, isn't he? So, what are you going to do? Are we going to miss another week of school because of this?

I understand you're concerned about the safety of the children. I really do. I like to keep my children good and alive as well. It's one of my hobbies.

Now, I'm not an experienced driver. I learned to drive the summer before we moved to North Carolina. I used to cry before leaving the house to go anywhere. Then I got pretty comfortable driving in my bubble (which is still pretty limited, I'll admit) and driving on a nice day wasn't so terrifying. But I refused to drive in the rain...until I had to. And then I just did it (but I still hate it). But I refused to drive in the dark...until, again, I had to (to run a child to the ER in the middle of the night) and, frankly, it was awesome because there were no other cars on the road. But I still don't like driving in the dark during high-traffic times. Oh, and once I even had to drive in the dark in the rain. And I almost cried.

Winter happens every year. And every year the south freaks out about it. They put so much salt on the roads that they're white with salt residue when the snow and ice melts. Oversalting, coupled with some good ol' fashioned solar power is usually enough to get us past those few icy days we have. But when they're not, can we have some sort of contingency plan besides waiting it out?

If there are still icy roads, let's send a gravel truck out to give people some traction.

Surely the cost of doing that is cheaper or equal to the cost of shutting everything down for a week (or more—I'm banking on more unless next week's forecast changes), what with loss of business, employees missing work to stay home with their kids, and so forth.

But, see, where I grew up digging cars out of the snow was basically a national past time. But we didn't just have snow, either. Ice storms happen a lot of places. Oh, and then there were chinooks, which are warm winds that would sweep across the plains melting everything in sight...until they stopped and the temperature dropped back down to normal winter temperatures and then everything would freeze again.

It was great for the ice skating rinks we'd clear on the lakes. It was like a zamboni had come through and resurfaced the ice for us—it would be pristine again, not a track in it, nice and slick (unless it froze while it was windy because then the waves freeze into the ice and you have to wait for the next thaw/freeze cycle to smooth things out again).

Obviously it was not so great for the roads. They, too, would be as slick as if a zamboni had just come through, so the gravel trucks would come out again (we don't use salt very often up north because it's too cold for salt to work) and sprinkle gravel on the road and everyone would just walk and drive carefully to school and work. Crunch, slip, crunch, slip.

You get used to walking while gliding your feet along the ground, as if you were skating, so that if you slipped you'd be ready to glide instead of fall on your butt. But that didn't mean we never fell on our butts. We did lots of that, too. Because ice is just slippery.

Anyway, my point is that sitting at home for week(s) on end because of an inch of ice and snow is a hard thing for me to understand. That doesn't mean that I want buses to come roaring down the icy roads, slipping into a group of children huddled around a bus stop and killing them all. Nope. It just means that maybe if you live on an icy road you can walk (or drive if you're afraid of the cold) your kids down to the end of your road, to meet the bus on the main road because the main roads are bone dry.

Chances are you've braved the ice for one thing or another already.

Look, see? I've come up with two solutions. Are they ideal? Maybe not. Is staying home for a week ideal? Goodness, no. I'd much rather walk my kids to the main road in the freezing cold to meet the bus than to be cooped up at home with them only to later send them to school on a beautiful day they would have otherwise had off (because, yes, we just kissed an entire week of spring break goodbye).

Don't have appropriate winter gear? Layer up, baby. Fashion snow pants out of grocery bags. Wait for the bus wrapped up in a quilt. Shoot—when I lived in cold places I always had a blanket in the car to wrap up in. When I lived in Russia I had to sit on a whole stack of blankets in the car because my host family was worried that the cold would seep through my buttocks and creep up my fallopian tubes to my ovaries where it would then freeze all of my eggs and any hope of my ever having children would be dashed to a zillion little pieces. The upside was that I never had to sit on a cold seat. Oh, and apparently I kept my fertility intact.

I know there are poor people around. I know this. But odds are pretty good that they still have extra clothes laying around, trust me (we're poor (i.e. we live below the poverty level) and we're swimming in hand-me-downs (except for Rachel...)). But if they don't, open the coffers, people, because they should. We live in a land of plenty where we throw away so much good stuff.

If a child comes to school not dressed appropriately for the weather (repeatedly) surely the school could clothe them. How many coats and sweaters and other stuff go from lost-and-found to goodwill at the end of the year? Why not just keep them and let students who aren't dressed appropriately "shop" there for gloves or whatnot? If you can't store the stuff, let needy families go through the leftovers at the end of the year so they can prepare for the next year...before donating forgotten items to goodwill.

Maybe they already do that. I don't know. I do know that our school supplies "Christmas" to several needy families at the school—including gifts of hats and gloves and things. Surely we could do a coat drive of sorts, too.

Anyway, my point is that there are things we could do to deal with winter better...but we simply choose to not do much of anything. It can get better, South. Life can continue in spite of the cold and ice and snow. We just have to decide that we're not going to let Old Man Winter take us down because, as I mentioned, he visits every year.

This week off school has reminded me of the month of school we had off in Egypt due to the swine flu pandemic of 2009. They killed all the pigs in Cairo and buried them in a mass grave and no schools were open for at least a month (so all the kids were out playing in the streets). It was like that all over the country. Andrew's classes were meeting in secret to get around the closure (because universities were commanded to close too). And I was like, "Overreact much?"

Having pigs in the city wasn't doing anything to spread swine flu person to person. There wasn't even any evidence of the virus being in the country. But there go all the pigs. Oh, and a month of school, too!

Anyway, I just think there's probably something else we could do besides declaring a state of emergency and hiding in our houses. It's not that bad out there, folks. Yes, even if your street is icy...it's not that bad.

And there are things we could do to make it better. Why don't we?

And if next week is the same as this week...

Let's just say it's a good thing my husband will be around to calm my nerves.
Posted by Nancy at 2:33 PM