As promised, there will be no complaining about today's snow day being unwarranted because we actually got snow this time! And, boy, was it ever exciting snow!

Andrew had stayed up late working so we went to bed rather late. Benjamin came in while I was clearing some clothes off the bed (by putting them on hangers like a responsible adult) and grabbed my leg and I might have freaked out a bit, but we got over that and soon Benjamin was settled in his little nest on our floor and we were ready for bed, too.

I finished brushing my teeth, turned off the lights, and hopped into bed. As I was getting comfy I saw lights flashing around the room.

"Did you see that?" I asked Andrew.

"It's not lightning," Andrew said. "It couldn't have been lightning. It's probably just some animal outside setting off the light outside our window."

"Well, the light on the side of the house has been flickering lately..."

"There! Did you see that?!" I asked when I saw a brilliant flash again.

"It happened again!" I said. "How are you not seeing this?!"

We heard a boom and saw a green and orange flash and the power went out.

"Is it the transformer?" Andrew asked.

Somewhere behind our house is a transformer, we think, because that's where we hear the noise whenever the power has gone out before.

There was another boom and a flash and then silence. This time the power did not come back on (and wouldn't for over twelve hours).

"Guess it was just the transformer," I said. "But that was a really big flash! It lit up the whole sky!"

We got out of bed and fumbled around in the dark to find flashlights and extra blankets. In theory, I have a flashlight that I keep on my nightstand for emergencies such as this. In reality, that flashlight is often commandeered by the children for shadow puppets and ghost story telling and other official childhood business. In other words, it was not where it was supposed to be.

Fortunately, cellphones will do in a pinch and I was able to find one of our camping flashlights (that we keep on a shelf in our closet because with the number of thunder storms we get out here it's just smart to keep them handy) and then I went to check on the girls. They were having a "sleepover" in Rachel's bunk, along with a billion stuffed animals, so they were pretty roasty-toasty but I threw an extra quilt on them, anyway. When I did Rachel woke up and I explained to her that the power was out, but that she should go back to sleep. She made sure she knew where her little battery-operated reading lamp was that she got for Christmas, first.

Next I put some extra blankets on Benjamin—who we've been putting to bed in double layers of pyjamas anyway since he's incapable of staying under a blanket—and spread one on our bed as well.

We checked the carbon monoxide detector and researched things like how long food can stay good in a fridge without power and a million other things I was so worried about that I couldn't sleep and then we went to bed.

"Did you see that?" I asked. "That's not the transformer. The transformer is kaput. I'm pretty sure it's lightning."

"I didn't see anything," Andrew said.

"Were your eyes closed again?"

"It's two o'clock in the morning," he pointed out.

"Well, this is really cool. Will you just get out of bed and open the blinds a little so I can see out the window, because I'm not sleeping, but I'm also not getting out of this bed. I feel as graceful as a walrus; I'm not rolling over."

He did, because he's awesome. And then we just watched the lightning for a while, since we determined that that's what it was. Lightning during a snow storm is rather amazing. It lights up the sky and reflects on the ground and you can't even hear the thunder because everything is so insulated. But it's also rather freaky...because lightning during a snow storm? Who thought of that?

Anyway, we were eventually able to fall asleep and we woke up to seven inches of glorious white stuff. I'm only able to call it glorious because we've been waiting for it for so stinking long (did you see our picnic in the sunshine yesterday?). Ordinarily I feel rather meh about snow. 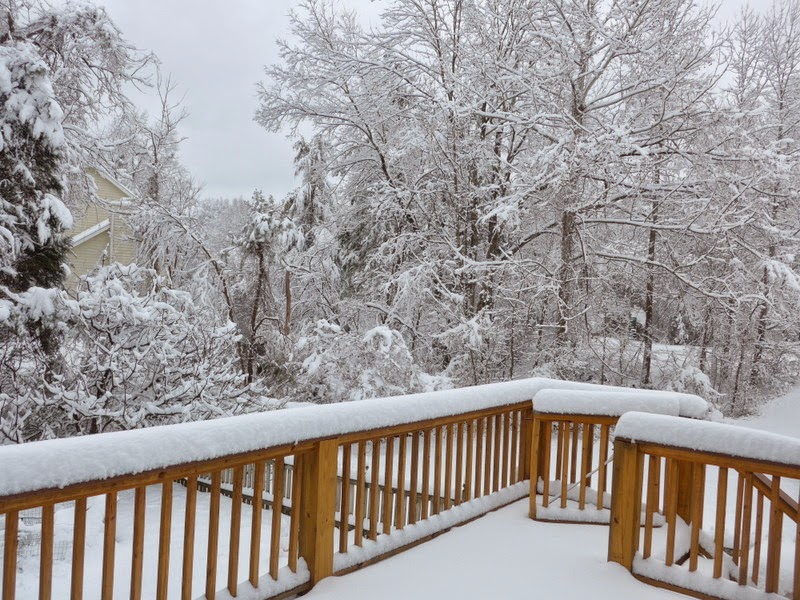 Our crape myrtle in the front was so laden with snow that it was touching our van! We were lucky none of our trees broke (others were not so lucky). 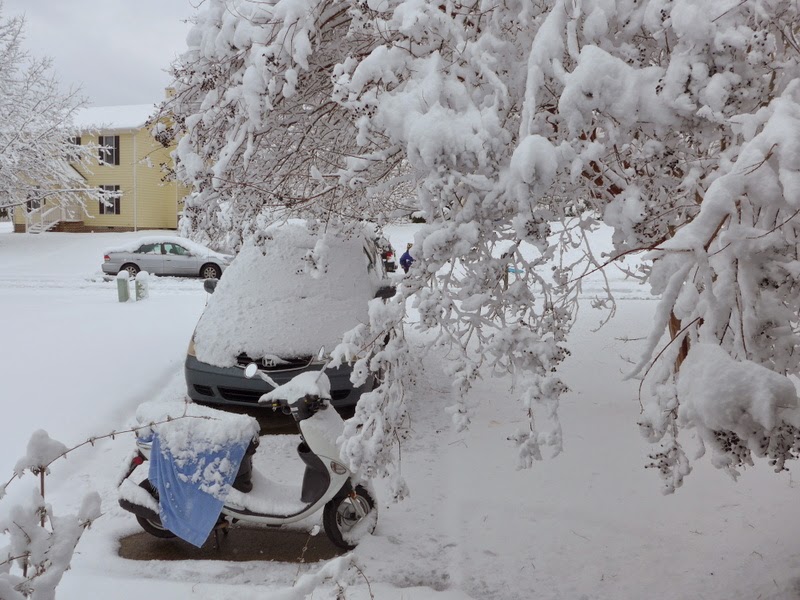 We boiled some water for oatmeal and had a nice warm breakfast together, in our house that was 10°F cooler than we were used to having it be in the morning (with the temperature still falling), before getting bundled up to go outside.

The girls wanted to play with their friends. Andrew borrowed a snow shovel from the neighbours, who'd just finished shoveling their driveway, and got to work. First he shoveled our driveway and then he shoveled our other neighbour's driveway... 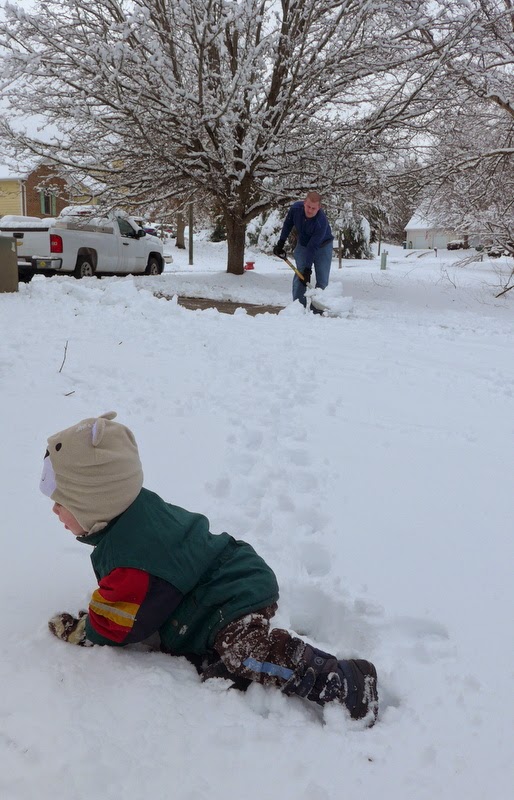 Poor Benjamin was having such a hard time navigating his little body through the deep snow. He kept falling down and saying, "Pick up me! Me can't 'alk in all 'is snow!" 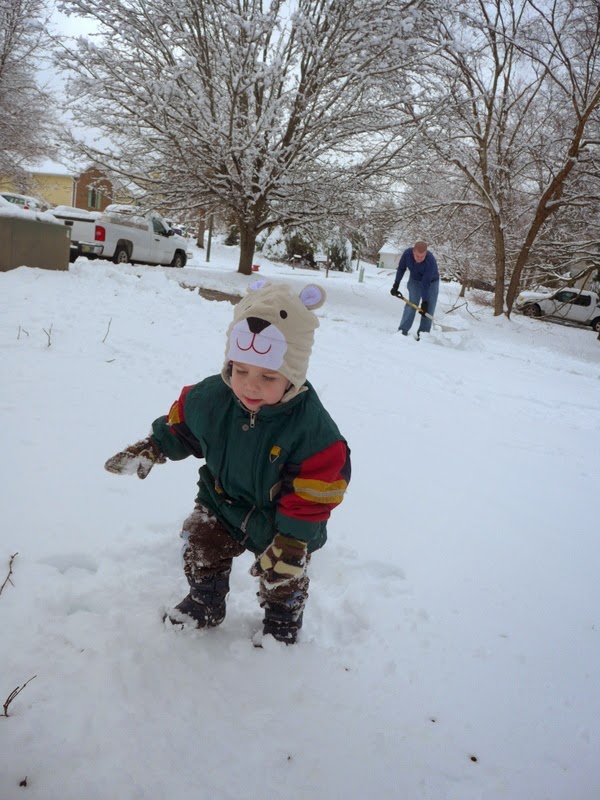 He and I built a little snow buddy together. It wasn't the best snow for rolling a snowball, but it sure was packable! 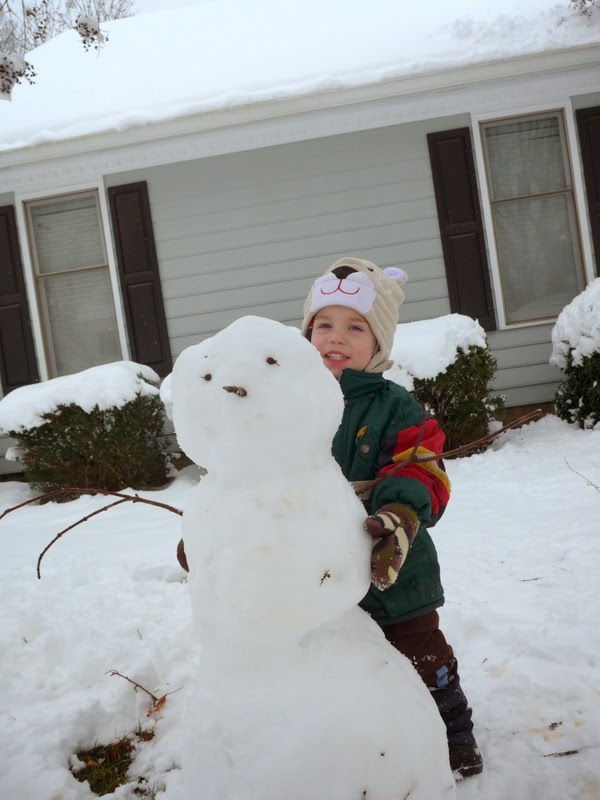 He loved his little snowman and started giving him spontaneous kisses: 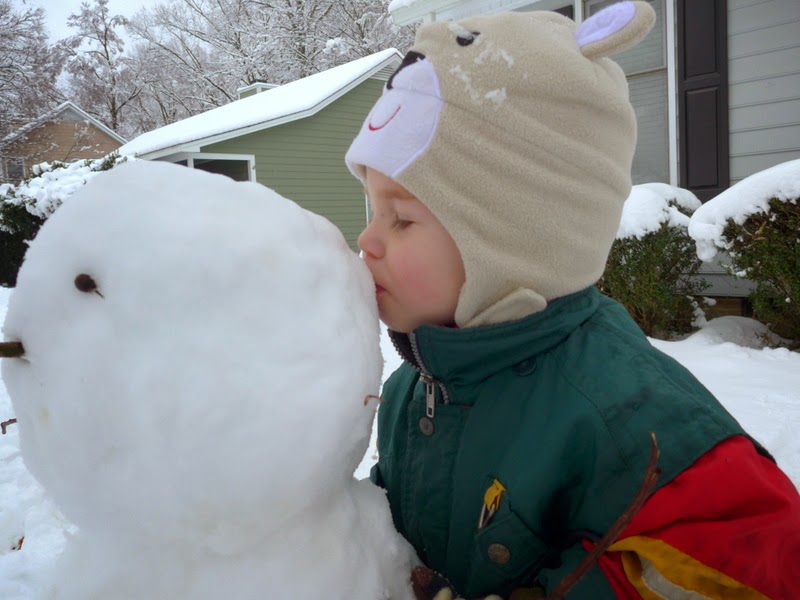 Here he is posing beside his snowman: 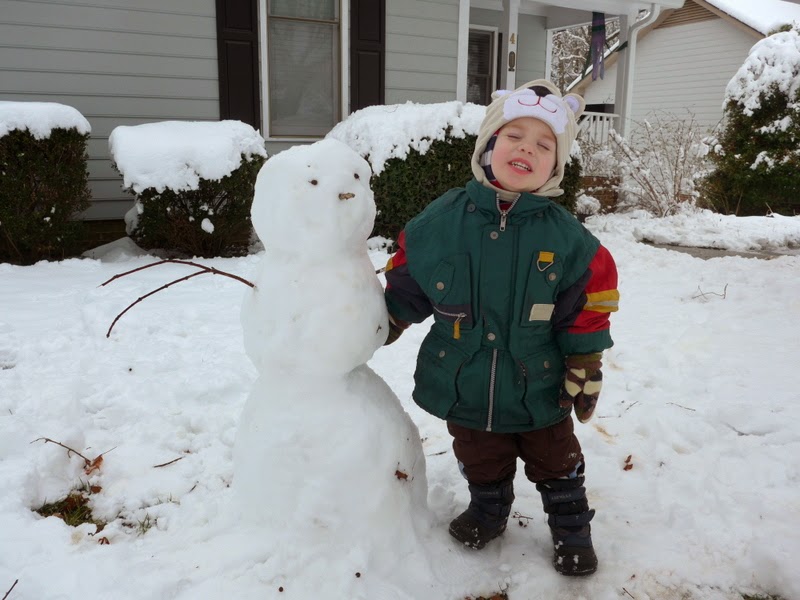 And here he is making his snowman wave his arms: 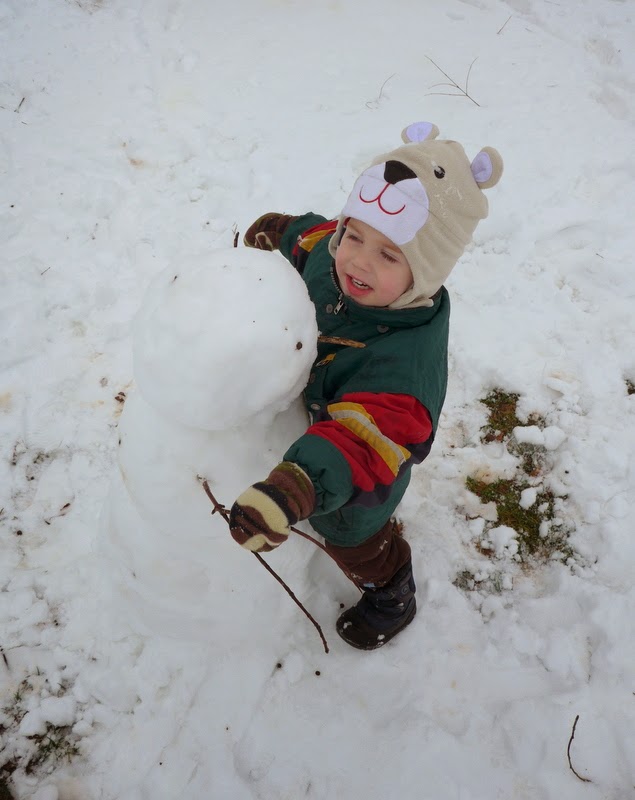 Benjamin named him "Baby" but the girls named him "Lightning" because they made a matching snowman across the street which they named "Thunder," for obvious reasons.

By the time we were finished with our snowman, Daddy had moved on to clearing a path in the gutter to lead all the melting water to the drain. This snow was so wet and heavy and it spent the whole day turning into slush. Our street was getting rather flooded with it; the water was quite happy to have a path to follow and we were quite happy to see it go because that's that less ice we'll have to deal with later! 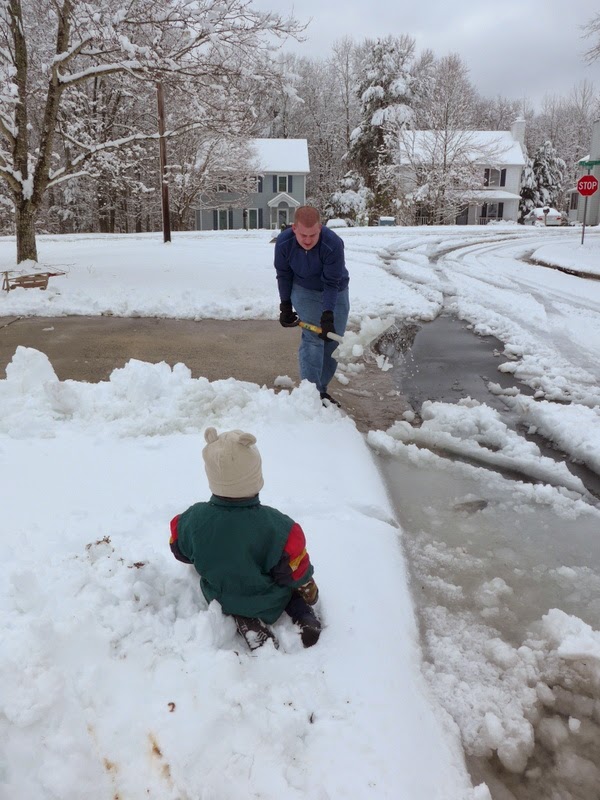 Here's more of Benjamin trying to walk in it: 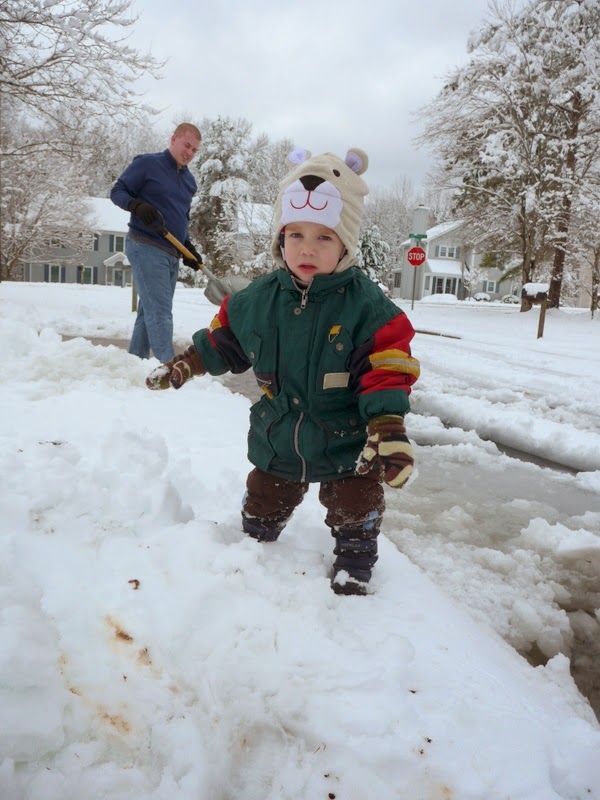 And then giving up and crawling to me: 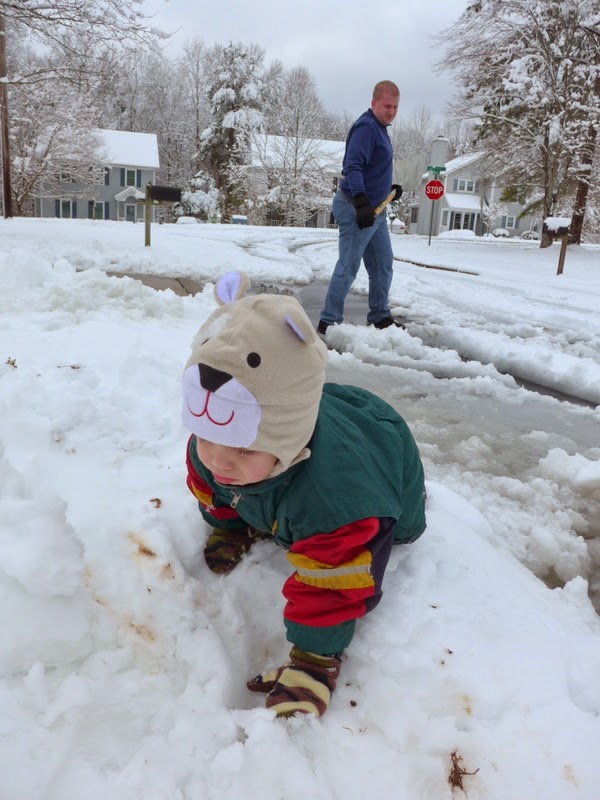 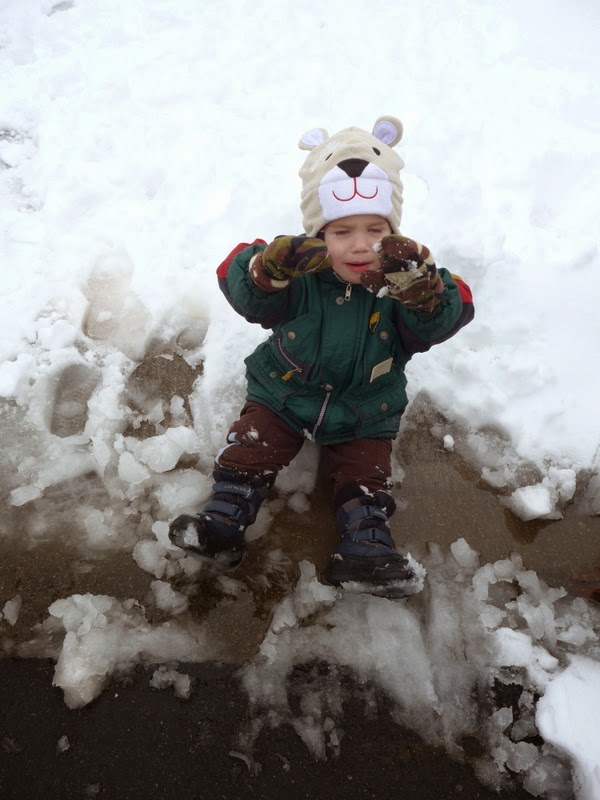 When Daddy was finished shoveling he was sweaty and exhausted and, much to my surprise, he plopped down in the snow. 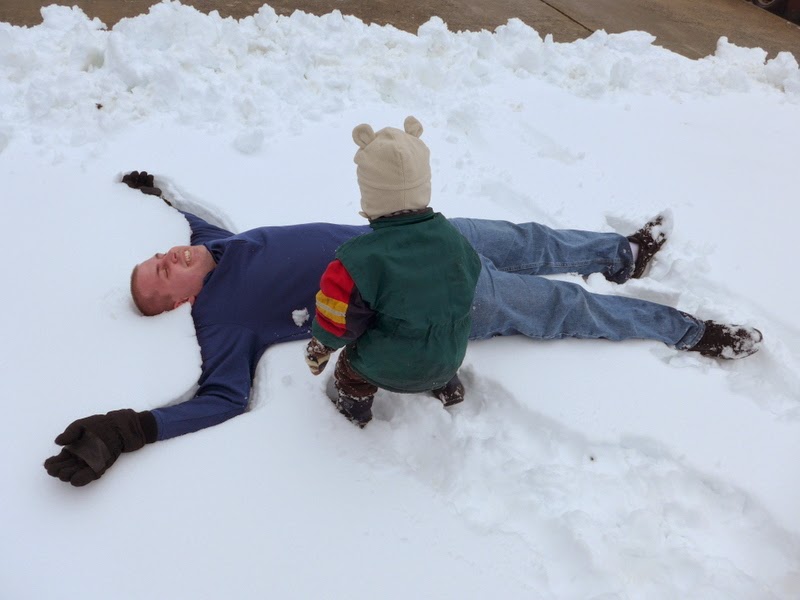 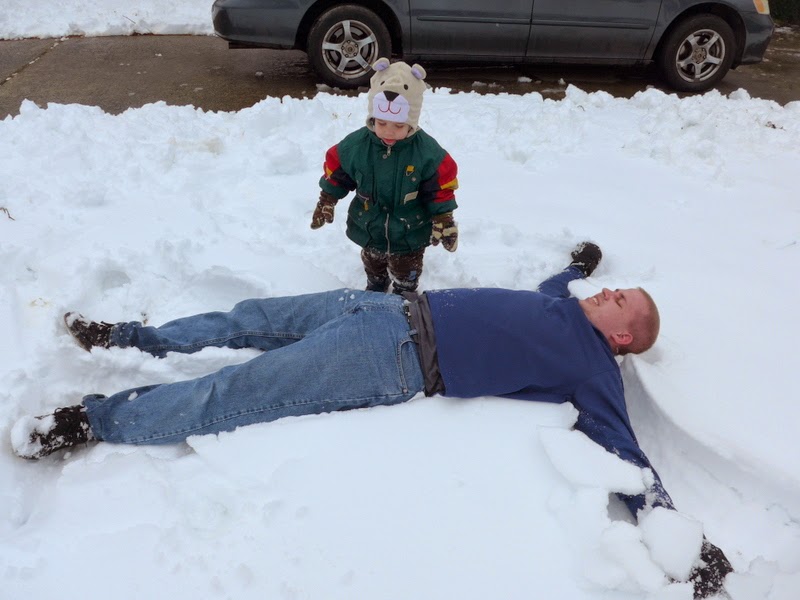 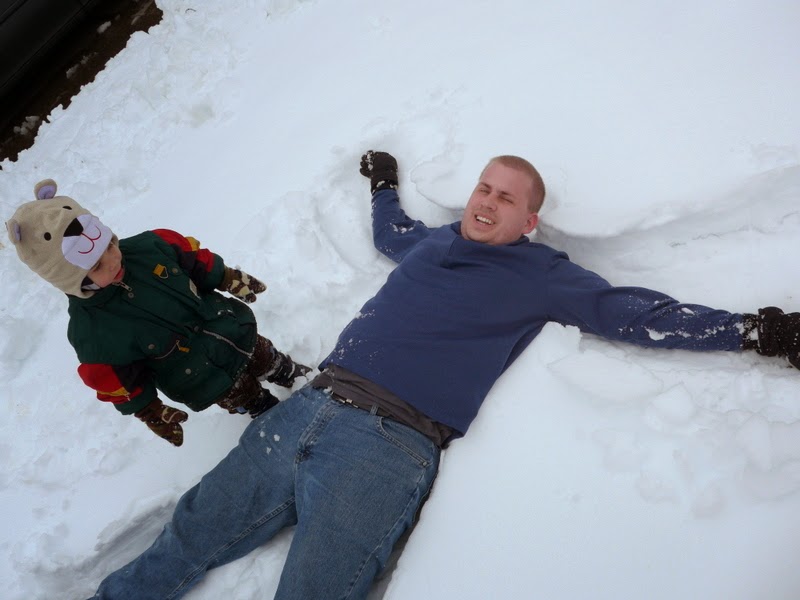 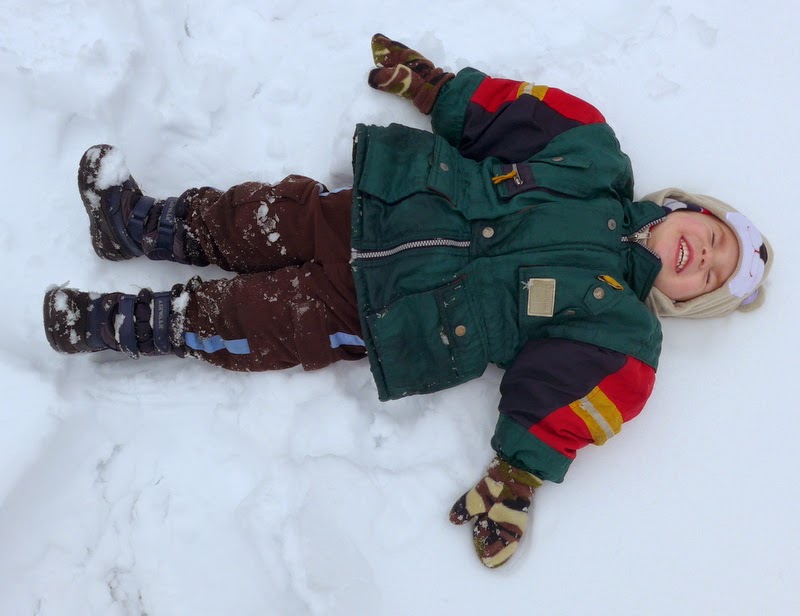 Getting back up was quite the ordeal for him. 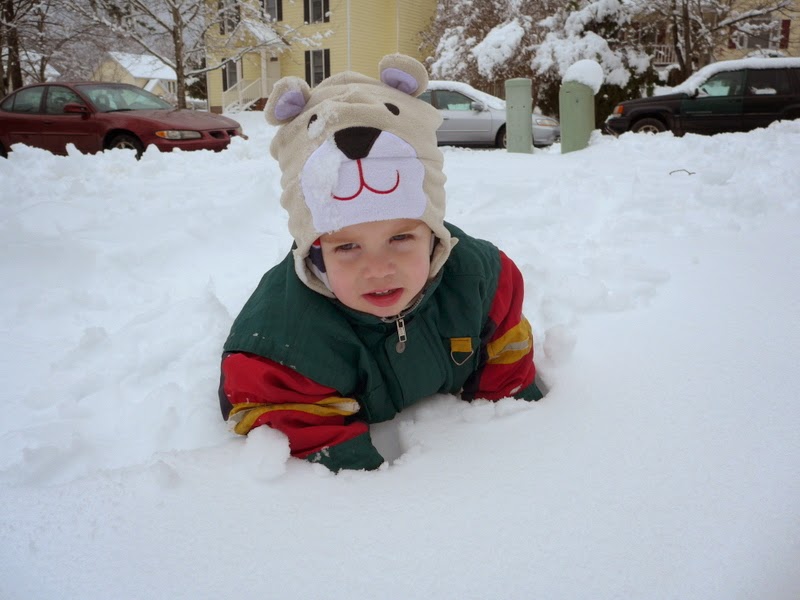 "Weren't you just laughing at me for making a snow angel?" Andrew asked. 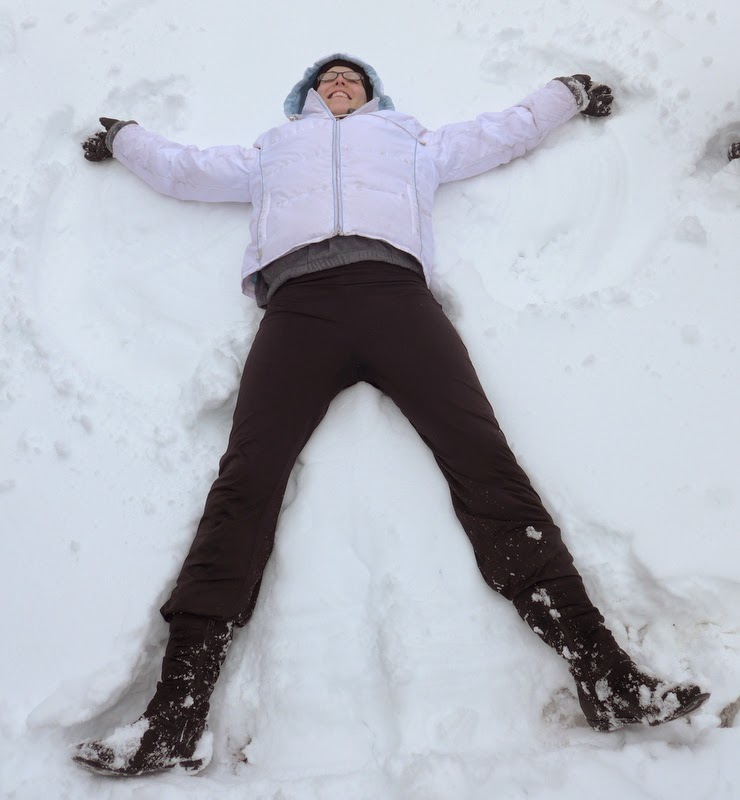 It was actually quite a lot of work. First I couldn't get down in the snow very easily without messing up my pristine canvas.

"I take like five minutes to get into bed and that's soft, too," I said.

Eventually I got down in the snow and then I had to go through all the work to move my arms and legs up and down. This was no fluffy little snow angel. It was a heavy duty fortress of an angel. 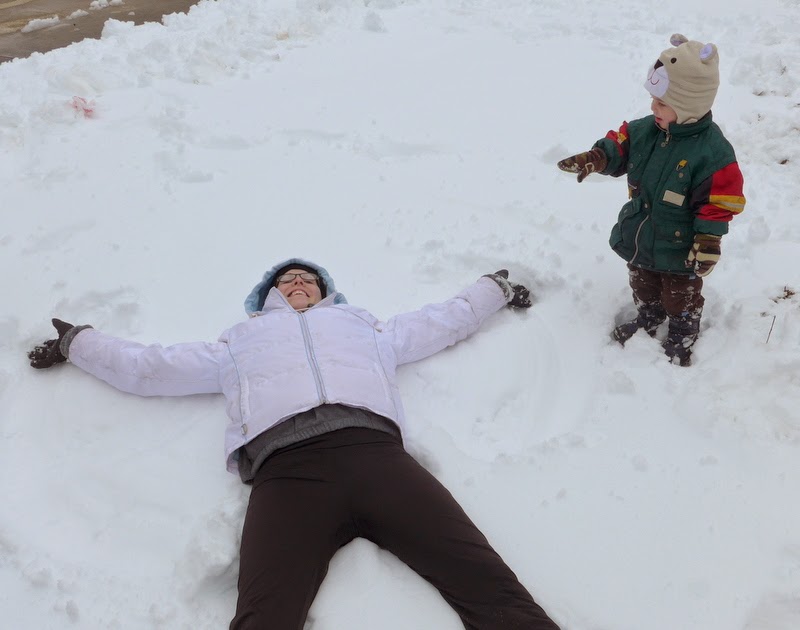 Here's a picture of my belly and the snow (Andrew gets a tad annoyed that I keep stealing his pullovers but they just fit so nice...): 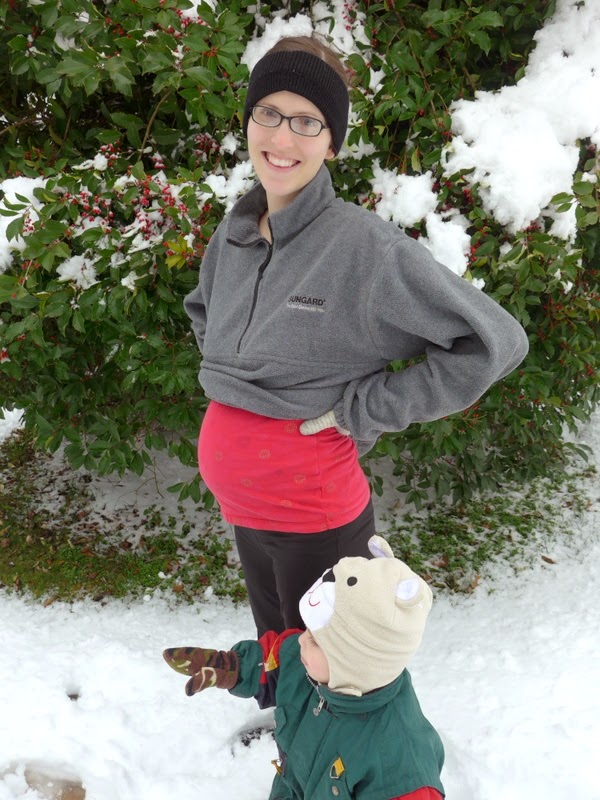 The three of us went into the backyard to play. Benjamin wanted help getting to the top of his "space ship." He can climb up there himself when he's not encumbered with winter gear, but when he's a little stay-puffed marshmallow man he loses a little of his dexterity. 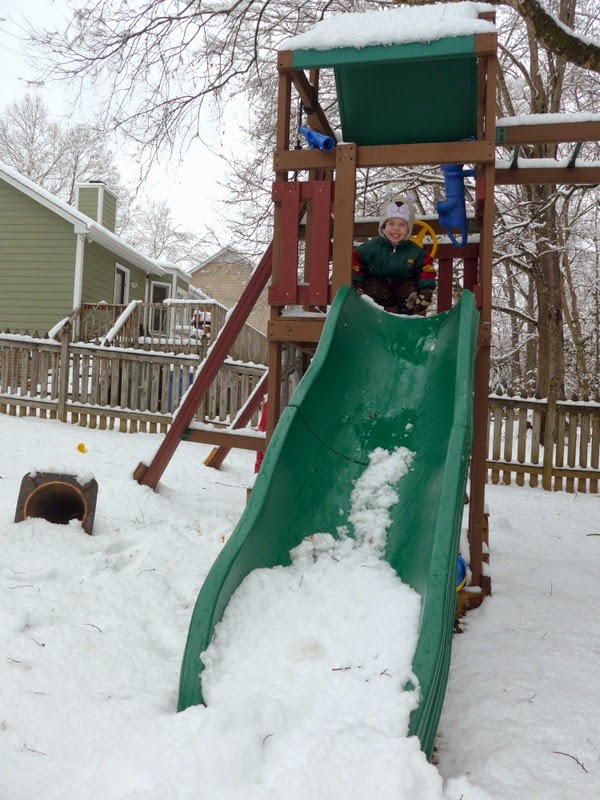 We tried to convince Benjamin to slide down but he wouldn't do it so Andrew eventually just pushed him down. 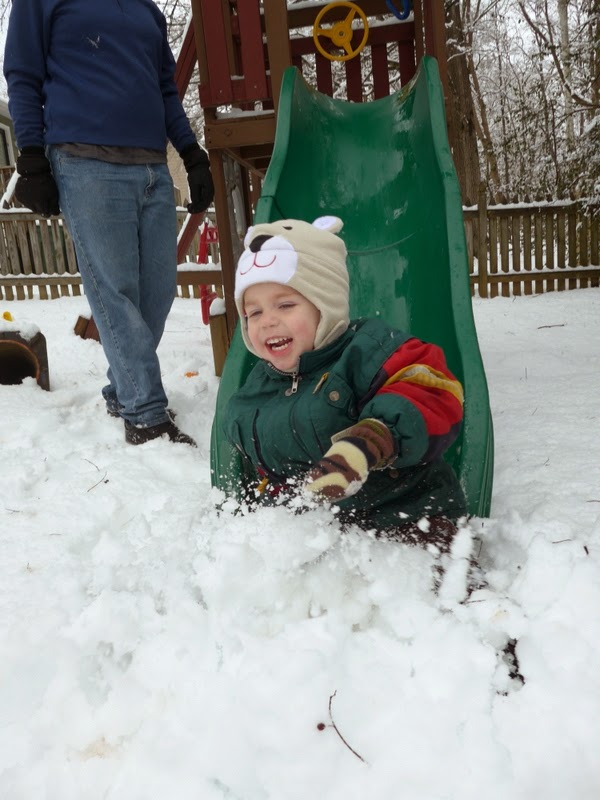 He was instantly converted to the idea and requested to go again and again. 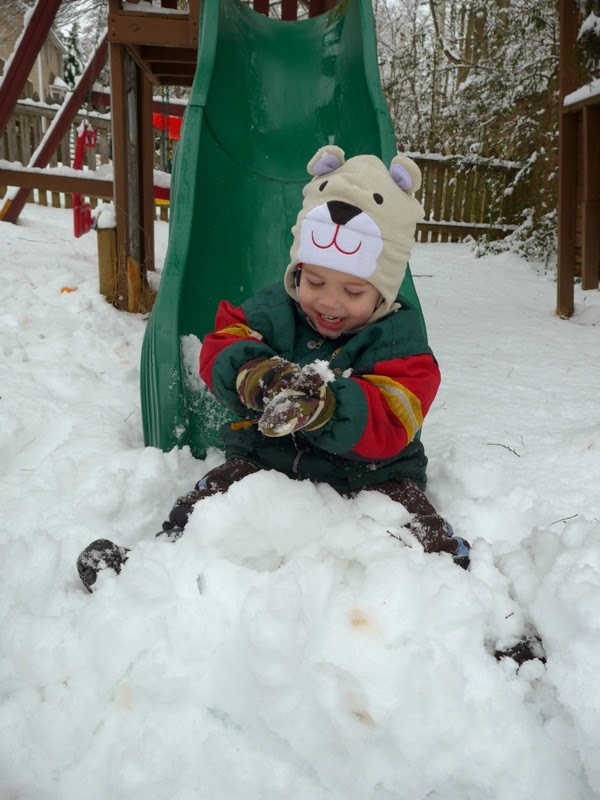 The only part he didn't like was the little push Daddy would give him at the top. Here he is admonishing Andrew to refrain. "Don't push me!" he said over and over. 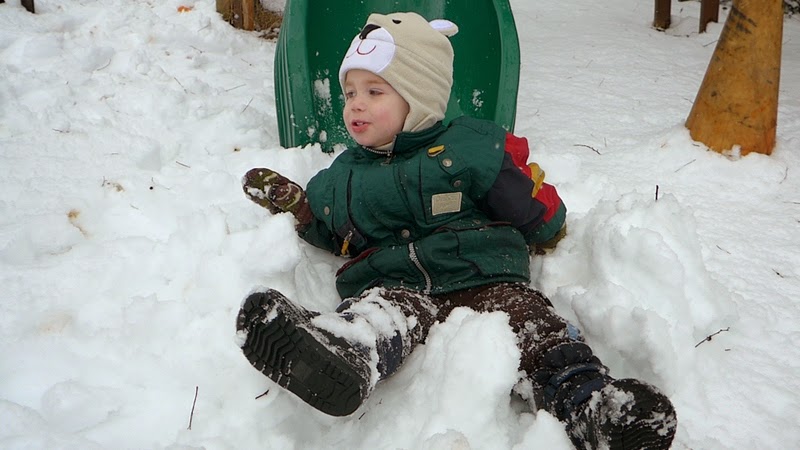 Here's a little video of him going down a few times:

I thought I should probably check in with the girls before going inside. They were in the middle of making Thunder the Snowman across the street (they'd been up and down the street the whole morning, playing here and there and everywhere):

Rachel wasn't willing to pose for any pictures; she was far too busy playing and I wasn't willing to chase her around. Miriam, though, was game for a few pictures. She showed me the snow bread she was having for lunch: 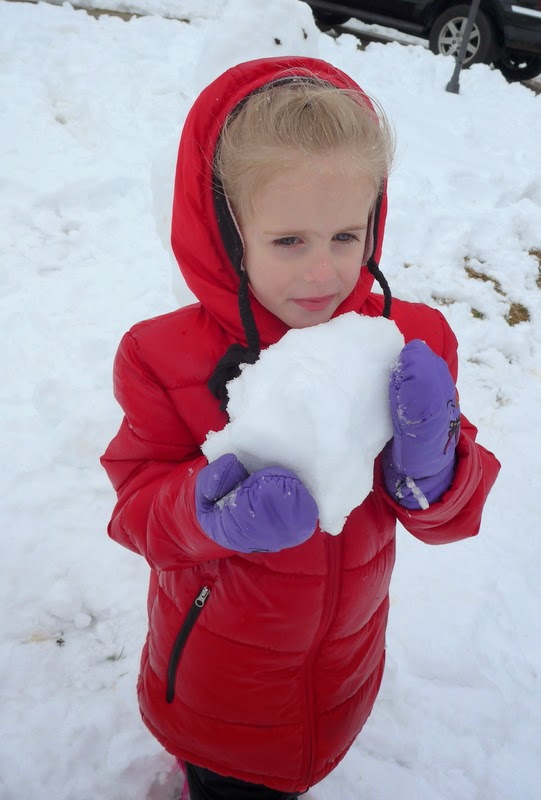 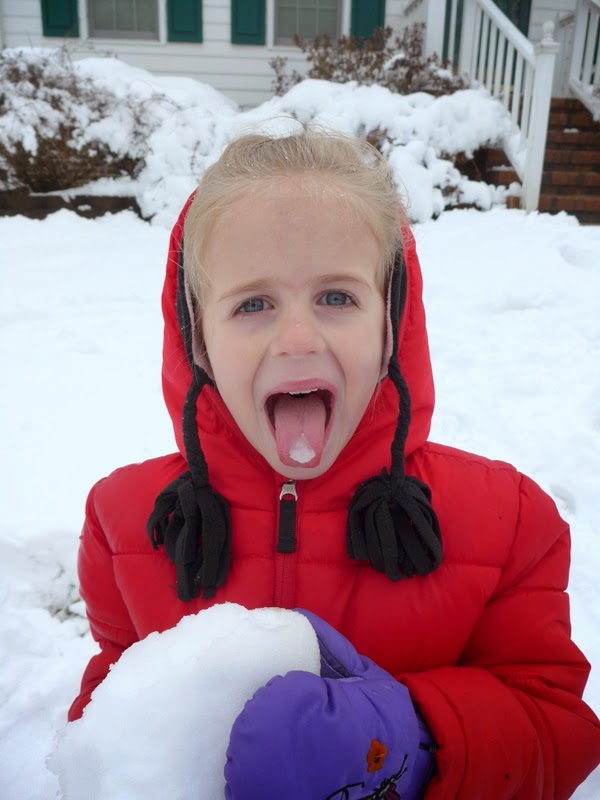 By the time I got inside Andrew had boiled a pot of water for hot chocolate/cider, which helped to warm us up since coming inside was a little bit of a let down (no heater, remember?). When the girls came in a few minutes later I put some soup on to boil. We were big on foods you could boil on the stove today. Thank goodness for gas stoves!

Just as Andrew was heading out the door to get some dry ice—since we had no idea when the power was going to be coming back on and didn't want to lose the entire contents of our freezer—I got a message from a neighbour a few streets away asking if the girls could come spend the afternoon with her daughter, who was feeling rather lonely (their street doesn't have many children on it while ours has a good handful). They were excited about that idea, so when Andrew came back with the ice he took the girls over there, where they spent a good three hours!

I napped pretty much the whole time. Andrew tried to but ended up getting up to entertain Benjamin. Lucky for him, the power came back on! By the time I woke up, Andrew had made a banana cake and had started the dishwasher, Benjamin was sprawled out on the couch watching Curious George, and the heater was busy warming things up again. It was a wonderfully quiet afternoon (for me). 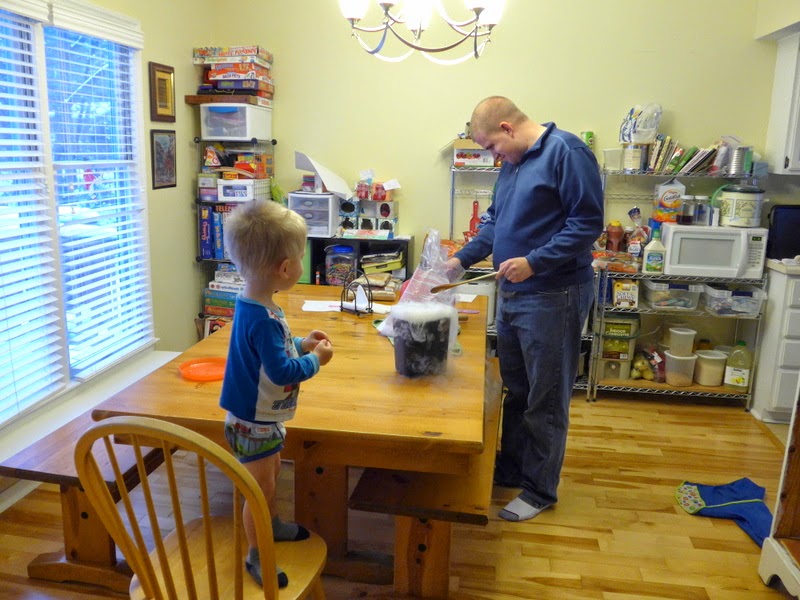 Benjamin was rather impressed by the magic of dry ice: 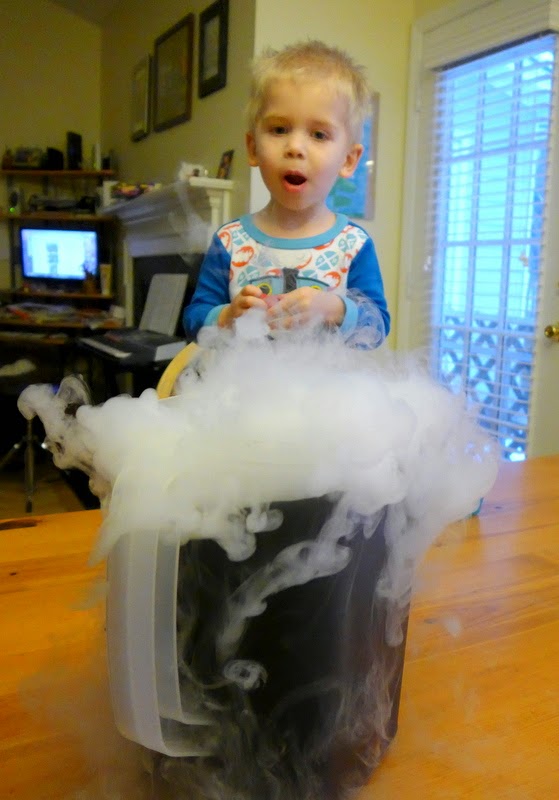 I'd like to take a minute to thank our linemen who worked so tirelessly to restore power to us and the thousands upon thousands of other families without power today, my friend Grant Thompson (the King of Random) for giving us some fabulous ideas of what to do with our leftover dry ice, my friend Natalie for offering to take the girls all afternoon, my mom for sharing her phone plan with us so we weren't entirely cut off from the world today (yay for data plans), my wonderful husband for letting me sleep for 2.5 hours, our neighbours for lending us their snow shovel, all the little kids on the street who helped keep my little kids happy today, and mother nature for giving us that brilliant display last night (even though it knocked out our power in the process).

It was a pretty good snow day. Tune in tomorrow for Snow Day #9.

Because obviously that's happening. Obviously.
Posted by Nancy at 7:35 PM