With a fever of 102°F and a constant cough, Miriam had to miss preschool yesterday (I think I already mentioned that) and she was a little bit distraught because it was her Valentine's Day party! Of all the day to miss preschool it had to be party day.

I, personally, believe that parties are an integral part of childhood education. Letting the kids break away from their ever-important daily schedule to just have fun together for an extended period of time? Super important. And she missed it.

Not that they don't have fun other days at preschool. But, honestly, this little lady goes to preschool solely for socialization. She already done learned her ABCs good enough at home that focusing on a letter per week is a little agonizingly slow for her. But she really likes seeing her friends every week and I think it's probably healthy for her to get away from me every once in a while.

Anyway, her teacher (who was actually Kiki this week since Annie's on maternity leave) dropped off her valentine bag this afternoon and Miriam was in heaven!

She went through and read each valentine and gave me the somewhat ridiculous candy count:

and 2 pencils and 1 little thing of bubbles (which are obviously not candy). 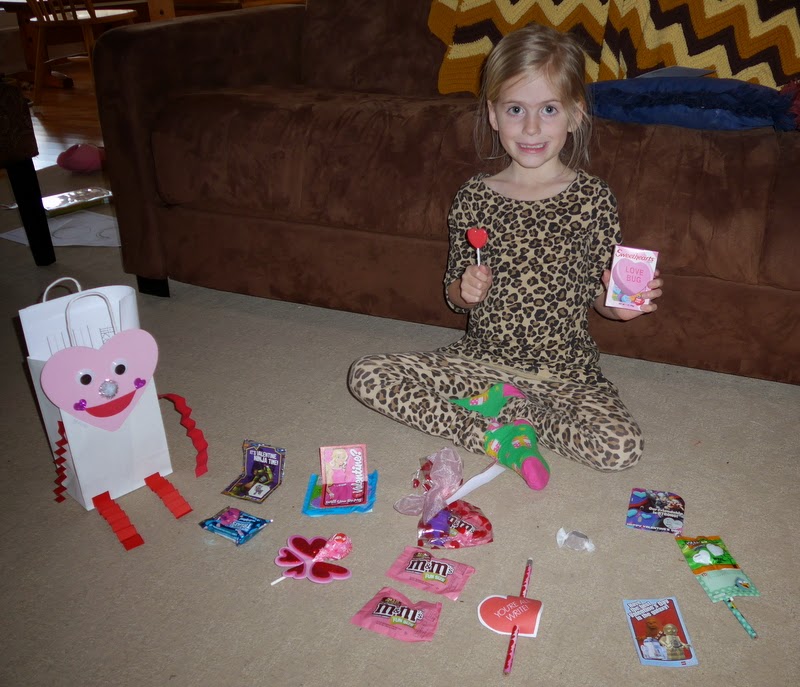 This is from nine children.

Two valentines were not taped to any candy and I thought to myself, "Yes! A couple of parents just had their kids write their names on their valentines and didn't do anything big. Miriam won't be the only one!"

But then I figured out the loose candy to loose valentine ratio was 1:1 and realized that, indeed, Miriam will be the only one in her class who didn't attach something extra to her valentine. I don't really care per se, I just was surprised that no one else just had their kids do something...understated.

Don't worry, world! We've got your back and are keeping understated valentines in the game.

She was so cute pulling everything out of the bag though. The valentine from her friend Rosie was pretty simple—just a paper heart that says "You're all write!" slipped onto a pencil.

Miriam brought it up to me, snorted with laughter, and said, "It's a joke. Get it?"

Then she counted up her candy and announced, "Mom! I got three packs of M&Ms! That's perfect! I can give them out! One for Benjamin, one for Rachel, one for me! 'Cuz there's three!"

Miriam very well may have been born with the biggest heart in the world and I love her for it.

Her fever is gone and she's feeling much better today. Well enough to do this, in fact: 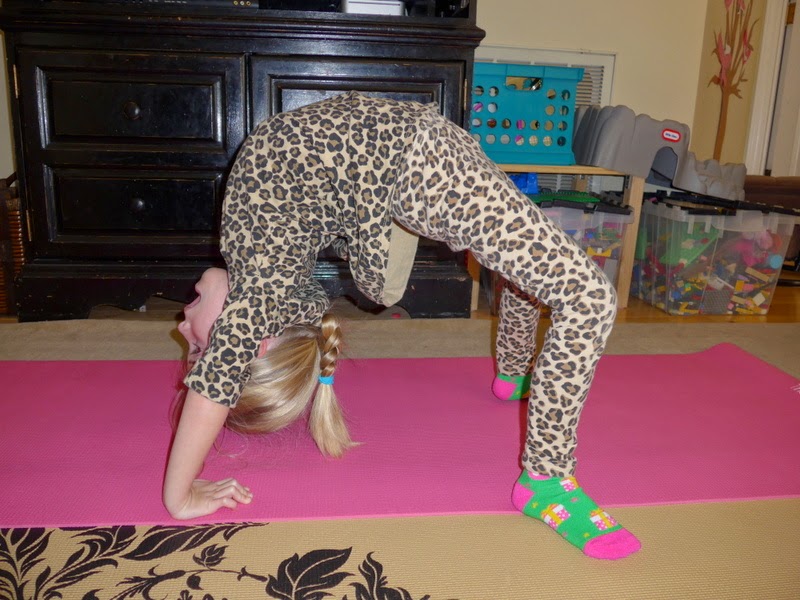 She was so excited that she got her head off the floor when we were doing upward bow during Yoga ABCs this morning (I actually am opting out of this pose at this point, along with downward bow and a few others—because Zoë—but I do other poses instead...unless I'm working the camera, which I'm obviously doing here).

We're still working on getting rid of her cough. And now Benjamin's battling that fever, which means he took another wonderful nap. Miriam didn't nap at all but she's been a wonderful nurse, forcing fluids into the boy all day. She just brought him his sipppy cup and said, "Here, Benny! I filled it up for you because you need to drink plenty of fluids when you're sick. Otherwise you'll have to go to the hospital and they'll poke you with a needle and give you a drink in your arm! And we don't want that, do we?"

She speaks from experience, but I don't think we're even close to that point with this sickness (which all in all is fairly mild).

Rachel's due home from school any minute now, so I'm wondering what valentine treats she'll be hauling home. She also took just plain, ordinary valentines to school, which is kind of funny because last year we bought a bunch of boxes of valentines at the grocery store a few days after Valentine's Day. Everything was 50–80% off, so we even picked up a few fancy boxes that came with individual boxes of stickers but the girls didn't want to use those ones.

Instead they were fighting over using some "pet pal" valentines—generic valentines with pictures of puppies and kittens.

"We're having a problem, Mom," Rachel said. "We both want to use these valentines. But you said I could choose one new box to open and that Miriam could just use the leftover valentines from family night!"

"This really isn't a problem," I said. "Unless you mean it's a math problem."

"What do you mean?" Rachel asked.

"There are 32 valentines in that box. Miriam needs to make 9 valentines. You need to make 19. Do you need to fight about this?"

So, they both got to use the valentines they wanted. And we blessed 28 homes with one fewer candy/junk item to deal with. You're welcome.

Happy Valentine's Day, one and all!

(PS. Zoë is really hoping there are some, like, jelly beans or starbursts or something she can have me confiscate from Rachel for her).

Rachel brought home mostly just pencils and origami paper (like, the origami paper is the valentine), so nothing for Zoë but that's okay. Apparently enthusiasm for extras-on-valentines wanes the older your child gets. Understandably so.
Posted by Nancy at 3:37 PM