Tomorrow and a tooth

The kids have been obsessing over the musical Annie. Rachel's been reading about it on wikipedia and looking up the words to songs. They've been turning on the soundtrack and singing and dancing in the living room. It's been a lot of fun!

Benjamin loves the song "Tomorrow!" because tomorrow is one of his favourite words. He's spent so much time practicing the song that he no longer says "tomowwy" and can mostly say it correctly. Here's a video of him singing to himself in the mirror (don't mind the noise of the girls fighting/apologizing in the background; they've been stuck at home with each other (snowed in!) for over a week):


Andrew didn't come home until around 10 PM today. He came bearing bo-berry biscuits (wise man). The kids were all still awake (even though I dragged them outside at 7:30 for a pre-bedtime walk, hoping they'd wear themselves out, get chilled to the bone, and be ready to stop jumping off the couch already so we could snuggle down in our nice warm beds but apparently they were just wired).

It was Rachel who answered Andrew's IM to me, asking me if I wanted bo-berry biscuits or anything.

She wrote back: "yeah! For Rachel to." and then tried to fix her mistake with this: "Oh oops. Rachel to?"

He wrote back, "Leaving now (to car). Toooo!" and she said, "Why did Dad type that? Toooo? That doesn't even make sense."

Clearly it's because she should have typed too and not to. Andrew knew immediately it was her and not me. And when he walked in the door, Rachel raced out to get a bo-berry biscuit, which she couldn't bite because her loose tooth hurt too much.

Andrew insisted on pulling it out. There were tears. But only a few. 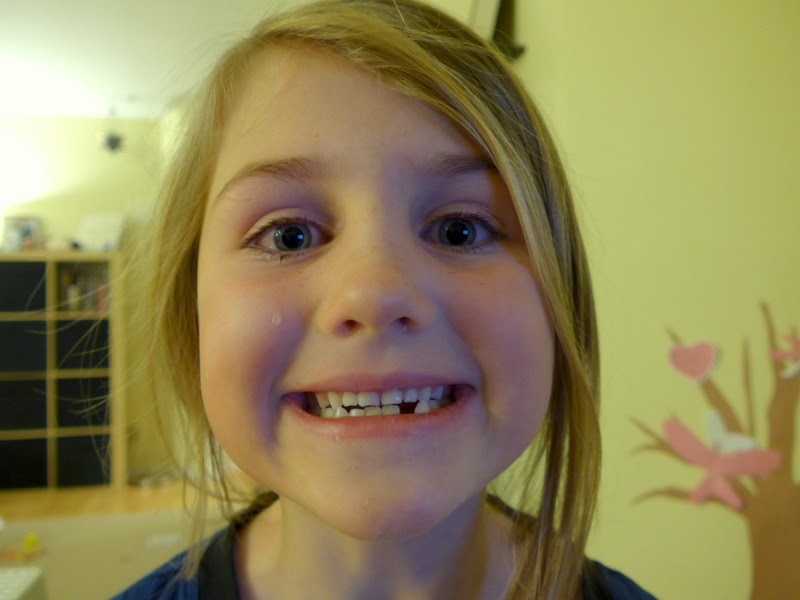 And she found that eating her bo-berry biscuit was much easier once it was out (and there was a little piece of broccoli stuck under her tooth, so it was a good thing we took it out; Andrew said, "I hope you had broccoli for dinner tonight!" We did).

There goes tooth #3 for this girl (finally—I think she's been waiting for another tooth to fall out since around this time last year). Growing up right before our eyes, dropping teeth into our hands. Parenting is awesome. And a little gross at times.
Posted by Nancy at 11:01 PM