I just about had a heart attack.

Benjamin knows our "routine," which is short and sweet (and doesn't include the pledge of allegiance because hearing children chant that creeps me out; I'm probably the only "preschool teacher" in the entire United States who doesn't include that in their morning routine but I just...can't). We start preschool with our alphabet song. This one, with sign language.

This morning I asked the kids to sit on the couch (to keep them from jumping around the room) but Benjamin was so busy doing something else (not sure what) that he couldn't come right away so he yelled, "Don't sing assabet song out me! Wait me! Don't sing out me!"

He loves the alphabet song. He's probably just about ready for a little joy school of his own...or at least more frequent trips to the library for story time. He couldn't stop gushing about the story time we went to yesterday. At dinner when Andrew asked him what his favourite part of the day was he said, "Go ay-bee." When Andrew asked what he did at the library Benjamin sighed happily and said, "Oh, sing songs! 'Ead stories! Make hearts!"

If he was a little more proficient of a speaker he'd probably have tacked on, "All in all, it was a pretty great day!" He had this aura of satisfaction about him the whole day, and in a similar way he just adored preschool this morning.


For our snack we made a smoothie (with spinach...because we eat that at our house (which might come as a shock to some, though less shocking news is that Andrew has never participated in spinach anything)). L. asked for his without spinach, "please," but he loved it with spinach and even asked me to give his mom the recipe. Unfortunately, there is no recipe. We opened our freezer, pulled out strawberries, dumped some in, threw in a few handfuls of spinach, put in the leftover canned peaches we didn't finish yesterday, emptied the container of almond milk, and threw in some frozen blueberries. I forgot to add a banana. But seriously, it's different every time.

Here's Benjamin trying to convince me that he doesn't need to be washed off because he kept his hands clean: 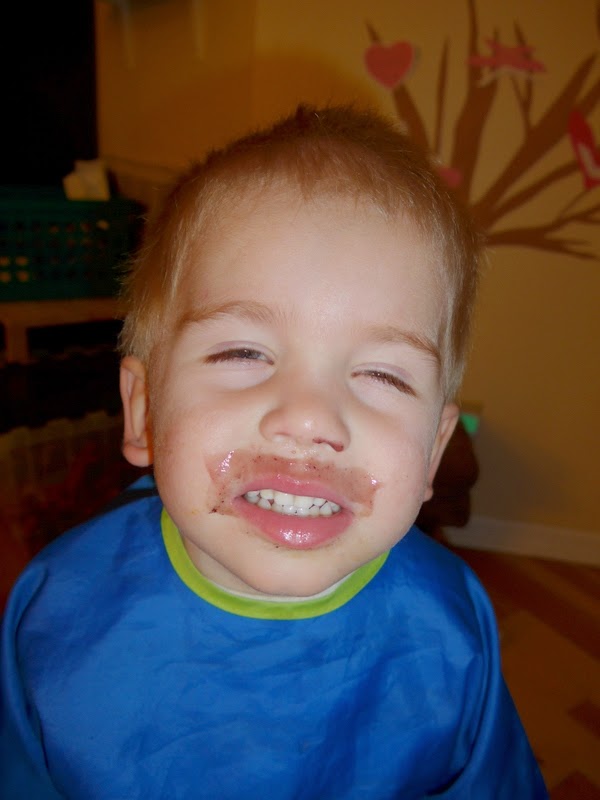 I was like, "Dude, you have smoothie all over your face!"

He kept waving his hands in my face and saying, "See? Me all clean!"

In the end I won. Because I'm the mom. And because I took a picture so I could show him his smoothie mustache (because selfies are the new mirror).

We did a lot of Valentine's Day activities, for obvious reasons, but spent the last bit of our time having "free play" because, honestly, that's what kids are good at. Benjamin and L. set up the train track while Miriam put together the wood farm. After L.'s mom picked him up Benjamin and Miriam continued to play with the blocks.

Miriam built a computer using the roof of the barn (that's behind her in the picture) and some alphabet blocks. She doesn't know about QWERTY yet—in her opinion the letters are thrown on the keyboard in random order (and, frankly, it's hard to blame her)—but I like that she at least put numbers on the top row and letters on the next three rows. 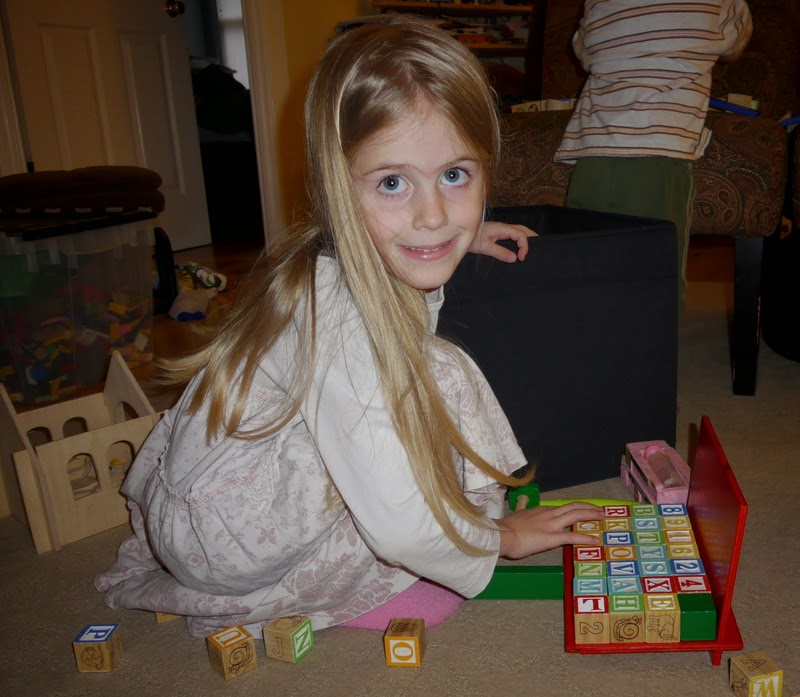 Tomorrow morning will feel so boring to these two after having two exciting mornings in a row, but it's also early release day so they'll be looking forward to Rachel coming home from school early. Rachel and Miriam are working on putting together a Valentine's Day show, so they've been quite busy together and are looking forward to having more time to rehearse. Even though I've watched more than one dress rehearsal already I can hardly wait to see the polished version of the show on Saturday (wink, wink).
Posted by Nancy at 11:30 PM