This is what Benjamin's room looks like every night after he falls asleep: 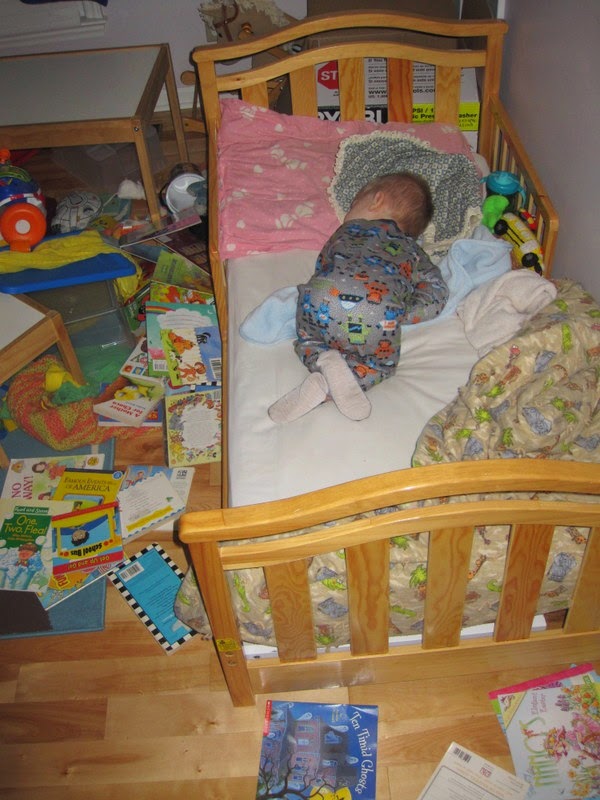 If I could get him to magically fall asleep, I would. But I can't. So he gets reading time like his sisters. He comes out to show me every book he chooses.

As much as I love story time it has to end at some point and the kids have to be sent to bed. I can only talk for so long before I just can't talk anymore. Or be touched anymore. And the kids just have to go to bed. They just have to.

It's not like I'm stingy with stories either. Tonight we read three picture books and finished Stuart Little (and we had so many chapters left that my voice was cracking by the end). And then the girls demanded to know if there was a sequel because, honestly, that ending in no way ties anything off at all. So I had to tell them, in the words of E.B. White,


"There is no sequel... A lot of children seem to want one but there isn’t any. I think many readers find the end inconclusive but I have always found life inconclusive, and I guess it shows up in my work."

The girls shuffled off to bed, hardly satisfied with that response. Benjamin went to watch the Super Bowl half-time show with Daddy (he really liked the dancing sharks) and then was sent to bed again but instead started playing the piano. He was quickly caught being out of bed because...piano....and was sent to bed again where he decided to "quietly read books by himself," which mean that he continued to get out of bed every two minutes to show me what book he's going to read next.


Reading on your own is a very important thing to learn in this family where sleeping is difficult (and so sleeping time is substituted with reading time) and Benjamin believes he can do it well enough. A few nights ago while everyone was getting ready for bed Benjamin brought me a book and asked me to read it to him. I told him that I couldn't because I was busy (I think I was flossing Miriam's teeth) but that he was welcome to read it to himself. He went and plopped himself down somewhere with the book and Andrew found him.

"Are you reading that book?" Andrew asked.

"I didn't know you could read!" Andrew said.

"Well, me am know 'ead!" Benjamin said proudly before returning his nose to his book.

He's a funny boy. I just wish he would sleep.

Anyway, it's no wonder Benjamin was having trouble falling asleep tonight. He was so wound up this evening. He finally quieted down a little after 10:00 and when we went to check on him we found a penguin resting on his head (in addition to his nightly pile of discarded books scattered all over his room). 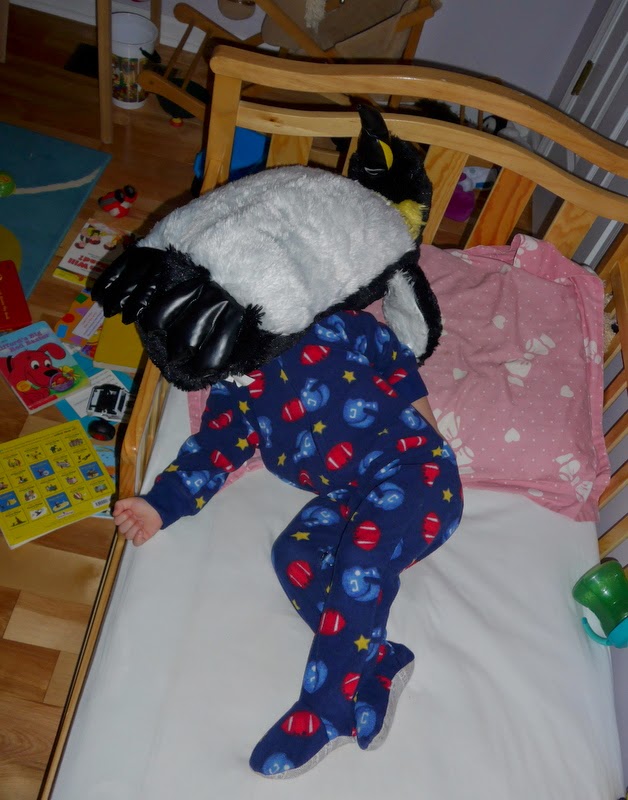 My friend Rebecca shared an article on facebook recently about kids who won't sleep (and how that doesn't make you a bad parent) and we had a refreshing talk about our kids and their ability to not sleep. It doesn't matter what we've tried. We have a well-established bedtime routine. We've swaddled. We've not swaddled. We've tried pitch black. We've tried night lights. We've tried just about any "method" you could mention. Music. White noise. Absolute silence. Rocking to sleep. Co-sleeping.

Sometimes nothing works. Sometimes you just get a baby who can stay awake forever.

I learned this when I had Rachel because she could stay awake forever.

I remember my friend Kim telling me once, "Now that the twins are in nursery I'm trying to transition them from two naps a day down to one nap a day. Do you have any suggestions on how to do that?"

And I was like, "Your girls take two naps a day?! Tell me all your secrets!"

Rachel didn't nap. She just didn't. I mean, when she was tiny she did. But even then she was a bit wild. She rolled over at two weeks. TWO WEEKS. It wasn't even like it was a fluke. She was rolling at two weeks. She was crawling at five months, folks.

When her peers were learning to roll over she was crawling.

Oh, and she never slept. Ever.

(Okay, so she slept sometimes, but only when she felt like it).

Soon after we moved to Egypt with our little one-year-old Rachel we had another little family who'd just moved to Egypt over for dinner and they left their two-month-old baby on the couch—which was across the room—when we went to the table. I was shocked.

"Are you sure you should leave her there?" I asked.

"She'll be fine," Lora laughed. "What do you think she's going to do—roll off the couch?"

Hahahaha. Yeah, actually. Because if she were my kid, she would!

Guess who was rolling before his due date (and not fluke-rolling, either, but consistent rolling). Benjamin. Five weeks old (aka -2 weeks old) and he was rolling over.

He, at least, was so top-heavy that it took him a little while to learn how to sit, crawl, and walk on account of...his head kept crashing to the ground. And he slept a little more than Rachel, especially when he was little because sleep is so important for growth. But honestly...I could probably count on my ten fingers the number of times he's slept through the night without waking me up.

Just last night he crawled in bed with me and I told him he had to sleep on the floor. He started screaming (not crying—screaming) and I said, "Wow. You'd better stop that if you want to sleep on my floor because I'll admit I'm not very motivated to get out of bed and drag you to your own bed but your screaming is very motivating and if you keep screaming like that you will find yourself back in your own bed."

He cut his screaming off immediately and plopped down on the floor, where he was awake for quite a while. I know this because when I got up to go to the bathroom like an hour later he called cheerfully from the pitch black darkness, "Hey, Mom! What'cha doing? Sun come up now?"

"No, buddy," I said. "It's still dark outside. I'm just going to the bathroom. You need to go to sleep."

I have no idea when he finally fell back asleep, but when I woke up this morning, there he was fast asleep, so he must have fallen asleep at some point.

This next baby had better be a naturally sleepy kid like Miriam. How many times have I said that? And how do I even have room to talk? I know the sleeplessness trait is from my side of the family.

Still, Miriam's quiet, peaceful, restful babyhood is a treasured memory (not that Rachel's and Benjamin's babyhoods aren't treasured...just that my memories of their babyhoods are a little more frantic and crazed). I'd like to repeat it. For reals.

Only this time I won't wonder what's wrong with her when she's "still not crawling" at eight months. I'll just sigh happily and say, "Baby, I'm so glad you're so busy sleeping that you haven't figured out how to move yet."
Posted by Nancy at 11:40 PM