Valentine's Day started bright and early with me taking the kids to a basketball game Miriam was cheering at and Andrew heading off to a scout merit badge training session. Benjamin's been looking forward to this basketball ever since we mentioned it during calendar on Monday at family night. Usually Andrew just gets up and takes Miriam to these Saturday morning games so we just don't mention the word "basketball" and Benjamin has no idea what he's missing. He loves basketball.

Anyway, before I even got out of bed Andrew said, "Oh! I can give you your present now!" and he opened the drawer of the filing cabinet.

He tossed me a box and I didn't even have to open it to know what he got me—because he didn't wrap it. It was a pierogi mold!

"You're not going to cry?" Andrew asked.

"No. Have I ever cried over a present?"

This has been a goal of his since we got married. He's done some thoughtful things—just not anything that would make me cry.

With dinner plans underway in my head, I forced myself out of my cozy bed and headed to the breakfast table. We managed to make it to the basketball game on time and Miriam did a cute little Valentine's Day cheer at half-time (and regular cheering throughout the game). 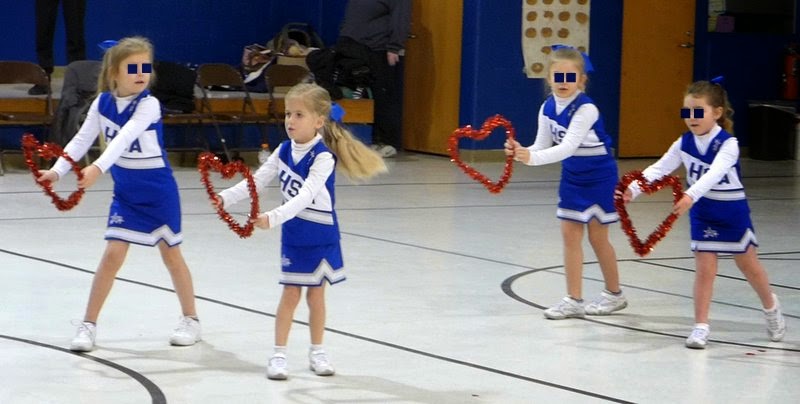 The rest of the day was pretty quiet. The kids played. We did a little cleaning. I worked on Benjamin's birthday poster (which I'm determined will be in the frame before this baby is born). Andrew worked on the talk he'll be giving at church tomorrow. Oh, and he went grocery shopping.

Seriously. I thought I had figured out how to avoid the lingering pain from these fiery butt darts by putting all my weight on the leg opposite the side receiving the shot (this week I got my shot in the left side so I stood with my weight on my right leg). I read about this trick on a forum about 17P shots (because apparently there are places you can go to just complain about these things). It's worked for me for a few weeks but this week I decided that the person getting the shot is only 50% of the equation. Sometimes there's nothing I can do to avoid being in pain after the shot. Sometimes I think the person to blame is the administrator of the shot.

That's right, nurse who left me a big, fat bruise. I blame you.

Oh, well. Just the luck of the draw, I guess.

After Andrew got home from shopping we had lunch and then Benjamin and I went down for a nap and I slept clear until Andrew had mashed potatoes and dough ready for making pierogi!

Now that I can make them six at a time things went a lot faster than they usually do. Andrew went to work cooking them in the kitchen while I kept filling and cutting them. He got a pot out to boil them but I asked him if he wouldn't mind "frying them up a little," too. So that's what he did in his own little American way. He boiled them and then he fried them. He boiled them and then he fried them.

He brought me a piece to try.

"It's so fluffy this time! It's because I sifted the flour!" he claimed.

I tasted it. It was fluffy. Much fluffier than it was supposed to be. I made a few more pierogi and then I went into the kitchen to get something (I can't remember what) and saw what Andrew was doing.

"What are you doing?" I asked him.

No wonder they were so fluffy. I'm not always a complete control freak, but you don't mess with pierogi day!

"Oh, well. Too late. I'll just keep doing them like this. They're turning out okay."

"Andrew," I choked from the table where I was working. "This is really dumb, but I need you to stop frying the pierogi that way. I need you to get out a new pan and put a little bit of oil in it and fry them just a little bit, like you're making a fried egg. I know it's dumb and I've been trying to tell myself that it's okay but it's not okay and...and...and I am going to cry about this."

Have I mentioned how emotional I've been lately? I try not to be. But I am, anyway. I mean, I know that ruining altering pierogi day isn't that big of a deal and I tried to tell myself that, I promise. But also, I'm pregnant and I was going to cry about it because you just don't mess with pierogi day!

So, we had two types of pierogi at dinner: fluffy deep-fried abominations and properly lightly fried perfection. And everybody was happy.

While we ate dinner we went around the table and said what we loved about each other. And we came up with some pretty good reasons, too.

I said I love Benjamin because he gave me a reason to laugh every day (Rachel pointed out that that's supposed to be Daddy's job but I can handle having more than one person make me laugh). Rachel and Andrew both mentioned that they love how cuddly Benjamin is. Miriam said that she liked playing hide-and-seek with him today and that she loves him because he's so nice. When she was really sick this week he snuggled with her, patted her head, and said, "Poor, Mimi."

"Mom," Rachel chided. "You said we were only allowed to say kind things."

She'd just gotten trouble for being passive-aggressive (for insulting her sister while she lauded her brother, saying, "I love Benjamin because he doesn't scratch me as often as Miriam used to when she was his age!").

"Pathetic?" she repeated. "That's not a kind word."

Cue discussion on the word empathy.

I said I love Miriam because she was always so thoughtful of others—sharing whatever she has is always the first thought that pops into her mind. Andrew loves how she loves to learn new things. Rachel said that she loves when Miriam plays hide-and-seek with her.

Benjamin was exempt from thinking of reasons why he loves people because he kept saying that he didn't love anyone but Daddy. We decided he's still in that stage of life where we love him simply because he exists and not because he contributes much to the relationship.

I said I love Rachel because she's growing up into a kind, helpful girl. She can do so many things and she can control her attitude so well now. It's been amazing to watch this transformation in her. Growing up is pretty cool. Miriam said she loves Rachel because she likes to play with her. They played pretty well today and it's always nice when that happens.

Andrew was loved because he's been doing so much to help around the house while I've been letting things slide. I mean, he's usually helpful anyway, but he's been doing more than his share lately. I can't remember what the kids said. That he's goofy, maybe? No. I think that was also me. I said that I love him because he's goofy and he makes me laugh. The kids said stuff, too, I'm sure. And Benjamin was sure to announce that he loved his daddy (and that he was finished with dinner and wanted to help washing off...now...but then Andrew said he picked up donuts for dessert so Benjamin decided to stay at the table).

All in all it was a pretty good Valentine's Day.
Posted by Nancy at 10:12 PM