My (second-) cousin and her son (my children's third-cousin) came over to visit while my mom was here. We weren't sure we'd be able to see her because she recently revealed that she is, at long last, expecting again and has been so terribly ill. But she was having a good day so she came to hang out and we had a lovely visit (me, my mom, and I) while the kids ran wild around the house.

Late in the evening, while I was making some grilled cheese sandwiches for the kids (because we'd completely neglected dinner), Alexander was hanging around in the kitchen and my cousin's son was kind of shadowing him. I tried to make some small talk with him, asking him if he's excited to have a baby at his house (he is, by the way, completely thrilled about it). Then he approached Alexander and said, "Hi, baby. Can I try holding you?"

Alexander looked him up and down, giving his request careful consideration, and then lifted his arms up. So little G. picked Alexander up and carried him around the house for a few minutes and it was the most darling thing ever! Alexander doesn't look particularly pleased here but I know he enjoyed it because he went over to G. several more times and latched onto him (and when Alexander said his bedtime prayers he was thankful for so many things—Daniel Tiger, and Naanii, and G). 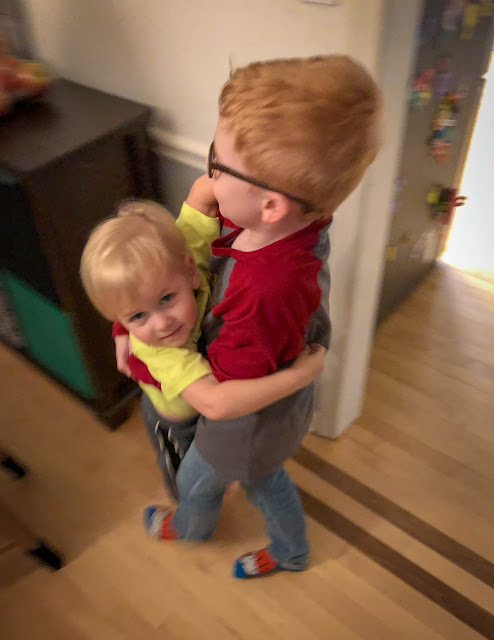