We didn't spend all day outside socializing (from a distance) with our neighbours. Just the afternoon.

We spent the morning hunkering down.

Andrew broke out an retro (1970s) version of Risk and played that with the girls. 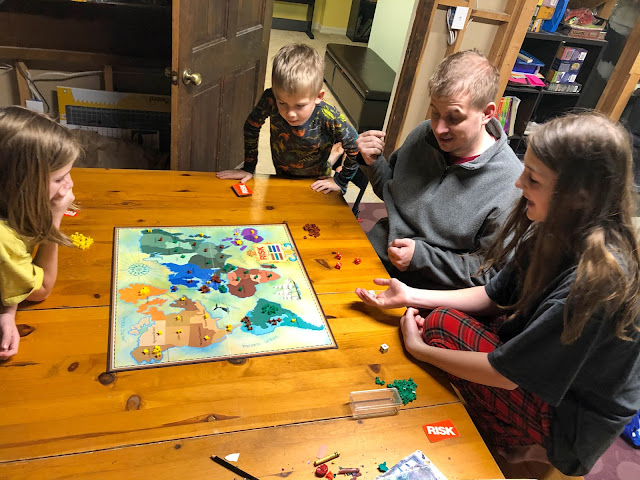 Miriam ended up taking over the world. Here she is taking her very last turn (the only place she had left to take over was Alberta and she took it): 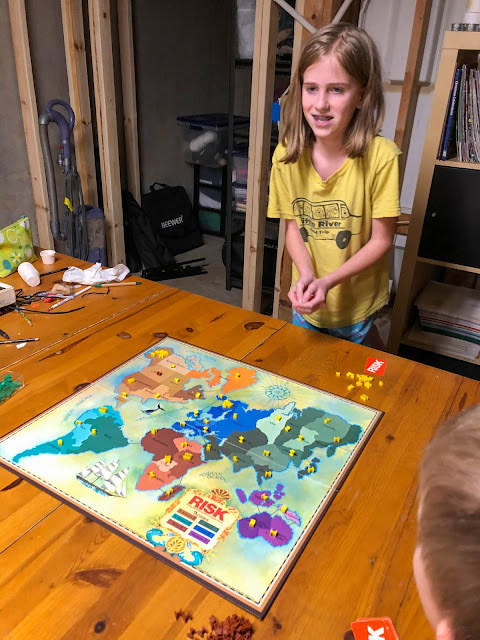 Here's Benjamin with his planets all aligned: 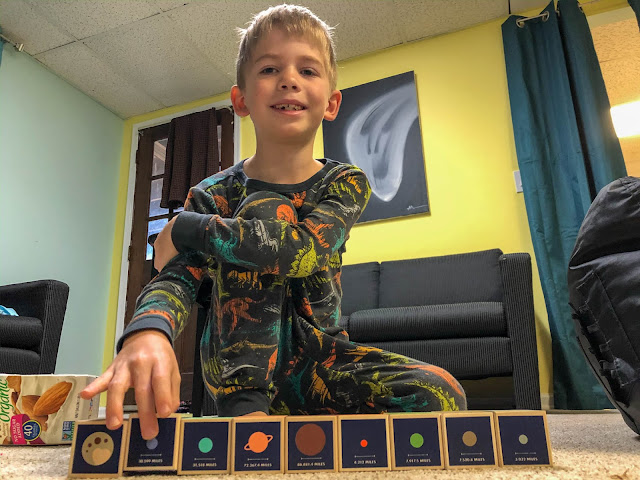 That's Uncle Rod's painting of Halley's comet behind Benjamin, but for the longest time I thought it was his take on Edvard Munch's The Scream. The kids are all actually rather freaked out by it (especially at night) but there it is...still on our wall.

The kids wanted to see if we could build a block tower as tall as Alexander: 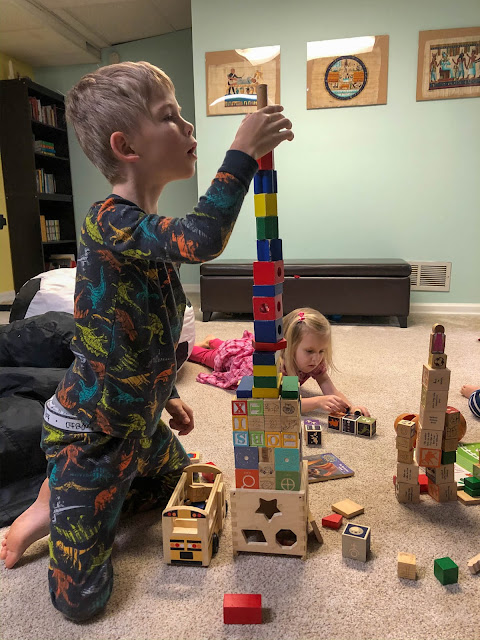 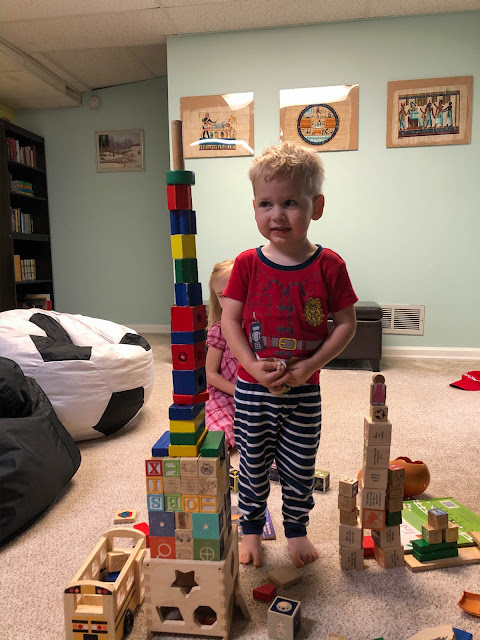 And then they wanted to see if we could build a block tower taller than Zoë: 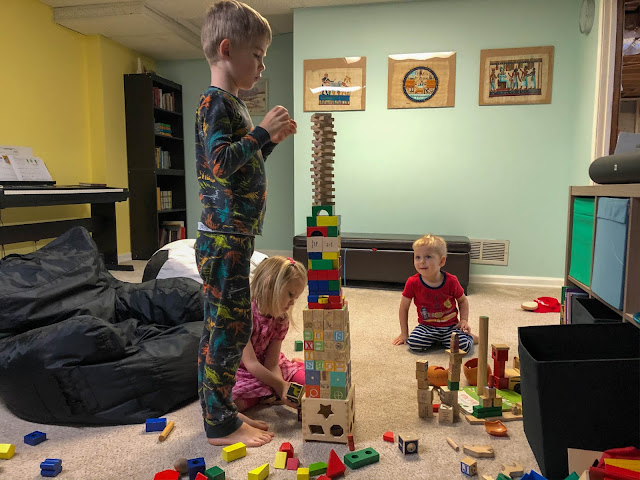 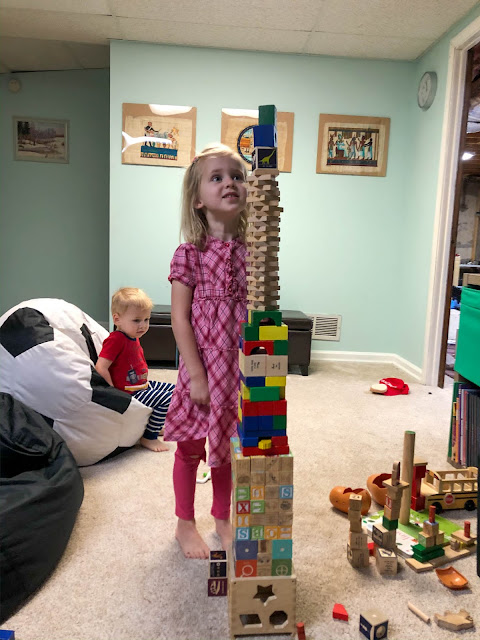 And then they wanted to see if we could build a block tower taller than Benjamin, which really was pushing the limit of our (1) supplies and (2) balancing skills: 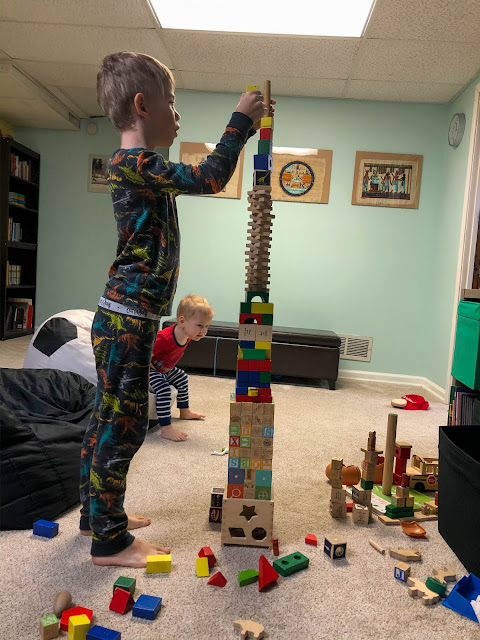 And as it turns out we just about could: 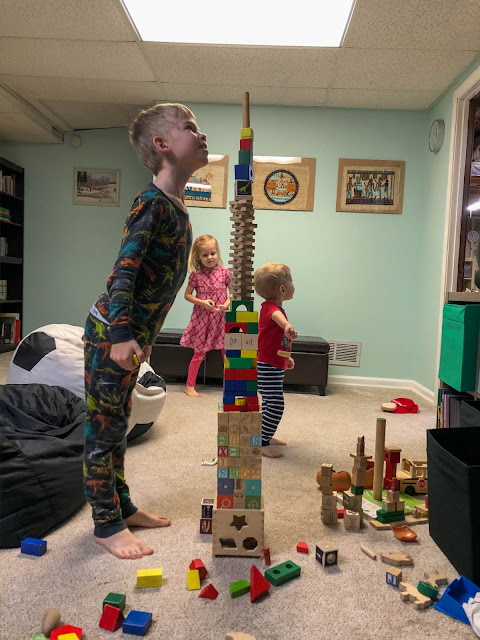 At one point they had another cylinder balanced at the very top, but I didn't get a picture of it. So at one point the tower was taller than Benjamin but it was mostly just as tall as he was. 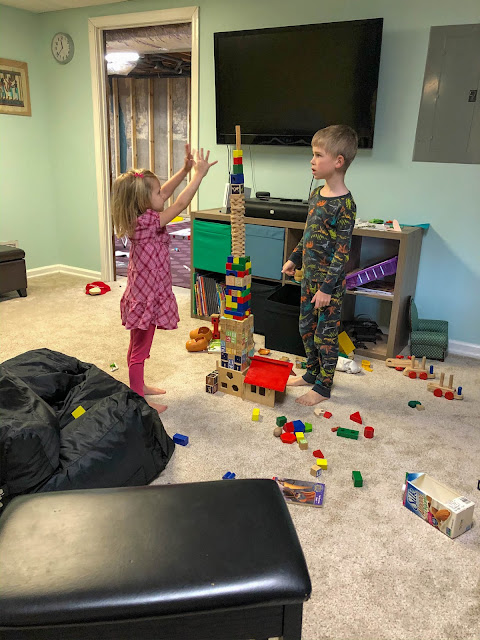 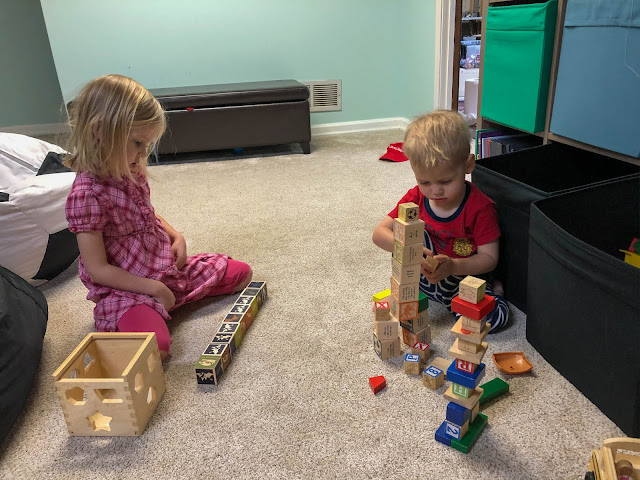 The kids were all going a little wild right around lunchtime, so Andrew told them to get on their shoes and head outside.

"But I just told them to get some lunch," I said. "They're hungry and it's time for lunch."

"Oh. Are we still doing that?" he asked jokingly.

"I know a lot of things are cancelled," I told him, "But I thought we should continue to feed the children."

So we had lunch before we went outside where I found this beautiful green spider (which looks to be a magnolia green jumping spider (even though it's sitting on our azalea bush, silly spider): 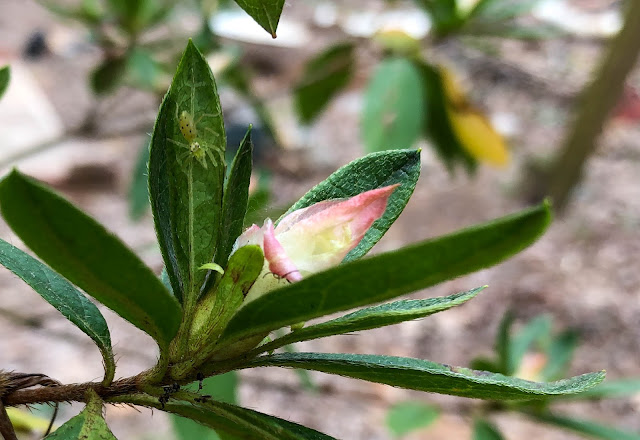 Alexander and Zoë built a boobytrap in our front walkway (it has since been removed, along with our obsequious pine tree that simply couldn't stop bowing at all who passed by (so they'd have to duck under it to get to the front door): 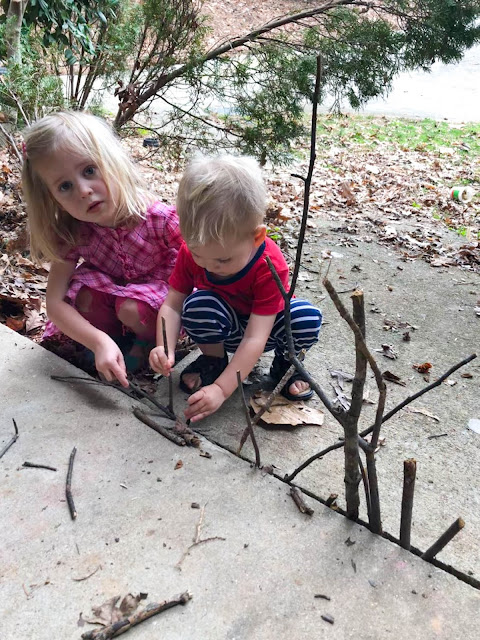 Here they are by the (spider-free) magnolia tree, enjoying the blossoms: 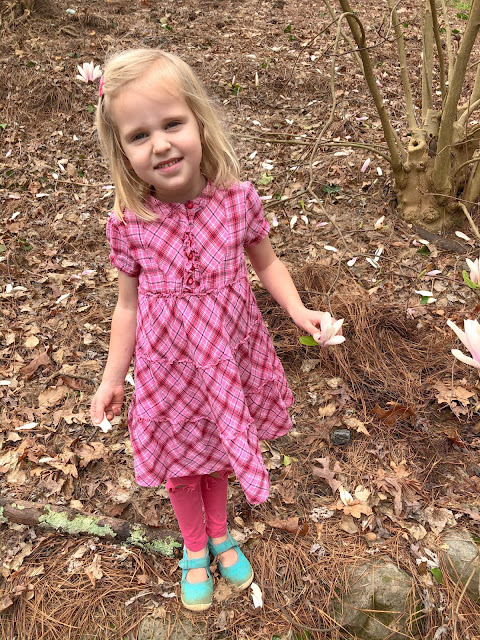 Alexander refused to look at me for a picture, but this one shows off his profile rather nicely, along with his sandals, which he "tied" himself. He loves his velcro shoes because he can "tie" them. I was wondering about this for the longest time because I usually just put crocs on him (because when I leave the house it's always with a billion kids and things and I don't have time to find socks and shoes) but Andrew usually puts his velcro shoes on when he takes him out shopping (which hasn't happened for a few weeks because pandemic stuff) and always Alexander comes home with his velcro straps crossed. I thought Andrew was trying to be all cool by crossing Alexander's straps, but it turns out that Alexander crosses the straps himself. And now he likes doing it so much that he will dig through his shoes until he finds velcro shoes just so he can "tie" them. 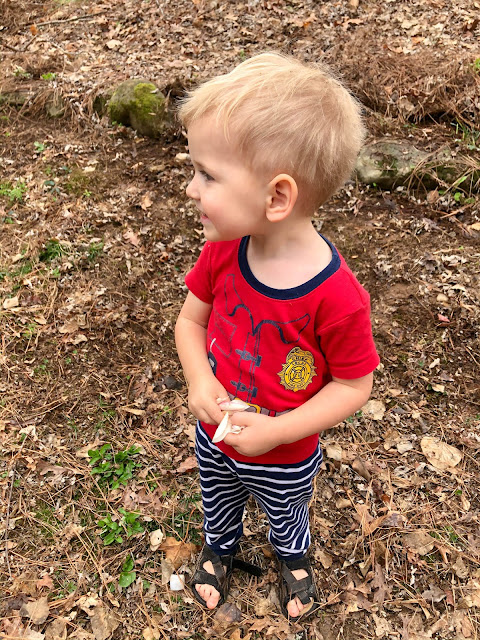 Here's Miriam with a snail she found: 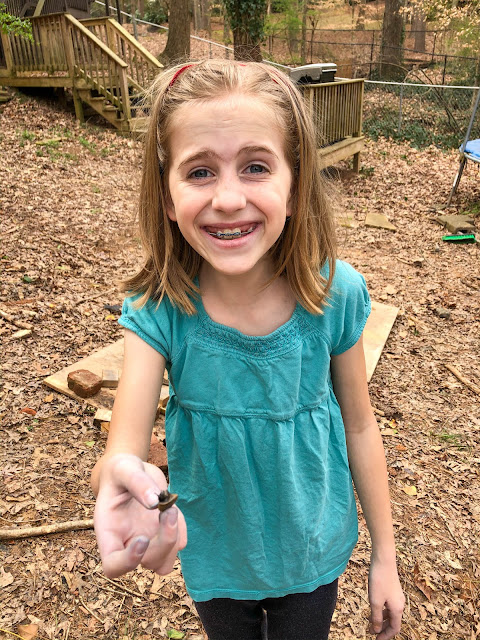 We found about six billion of these today, to be honest.

And here are the little kidlets enjoying their traditional Saturday evening bath because even though we'll be having church from home for the foreseeable future we should continue bathing our children somewhat regularly. There are some things you just don't give up in a pandemic—like eating and bathing. 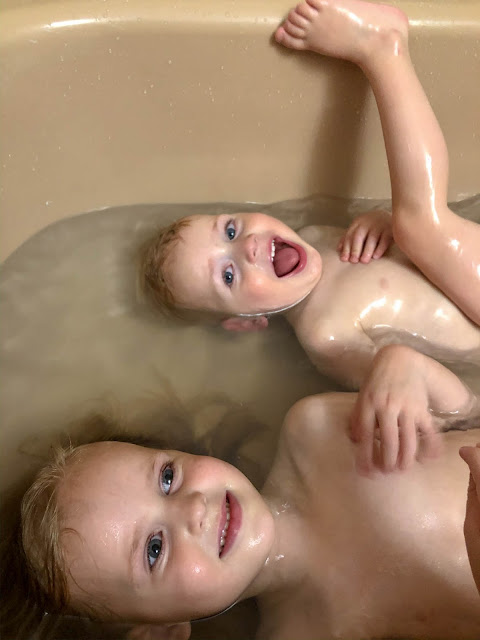 Alexander was a little naughty in the tub, making way too many splashes than was tolerable.* I was soaked, the floor was soaked, the toilet was soaked, everything was soaked. And he just wasn't listening, so I finally rinsed him off and lifted him out of the tub against his will, wrapped him in a towel, handed him his jammies, and told him to go find Daddy and ask him to get him dressed.

Later I asked him why he was being so naughty by not listening.

"When you're naughty you get in trouble," I said.

"Then why haven't you been listening to Mommy lately?" I asked him.

* When we were discussing social distancing with the children—the prospect of all of us being home all the time for weeks on end, without shopping or library or school or work or extracurriculars or church or activities to break up the days, I told them that if we were going to survive the pandemic we'd have to ROT in our house together. Respect. Obey. Tolerate.

We have to respect each other: listen to their verbal cues, mind their non-verbal cues, do what you can do to make everyone feel appreciated and cared for.

We have to obey Mom and Dad quickly because mutiny will make everyone miserable. So no unnecessary temper tantrums over chores or anything like that. Just pitch in and do your part and we'll all be happy.

We have to tolerate slightly obnoxious behaviour in others. This goes hand-in-hand with respect, but is slightly different. If someone is humming while you're trying to do your math work, go ahead and ask them to stop. But if they don't stop, don't bite their head off. Just find another place to work or ignore them or whatever. I mean, sure. They should respect your reasonable request, but if they don't can you just tolerate a little bit of annoying behaviour from them? Because we're all annoying sometimes. There's no need to bite anyone's head off over anything, really.

So we've been asking the kids if they're ROTten when they're getting up in each other's business, which has worked well so far as a gentle reminder to simmer their little attitudes down. But then Rachel asked when the -ten of rotten stood for. So I told her, "Well, it's respect, obey, tolerate...tickle everybody..." and I gave her a little surprise tickle attack and then gave her a double thumbs up and said, "Niiiiiiice!"

And she rolled her eyes at me. Can you believe it!?