Today's forecast (much like yesterday's and tomorrow's) was rain, rain, rain. But, mid-morning when the rain suddenly let up we decided we had better head outside for a quick walk around the block to cure us from our cabin fever. So we did. 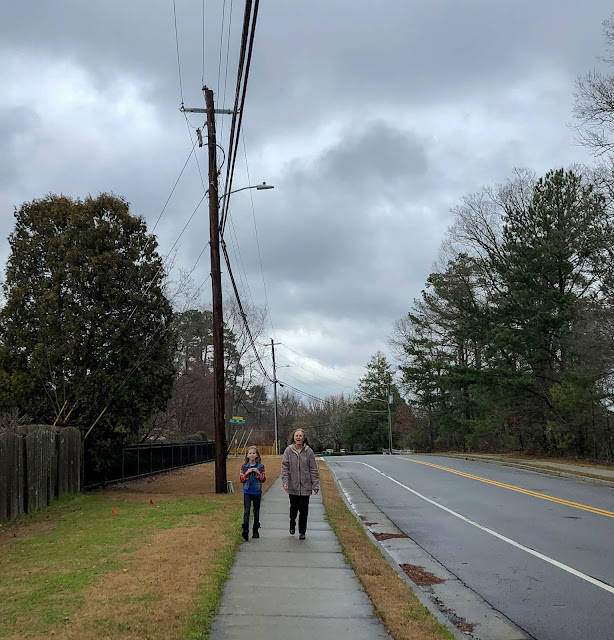 And then we came home and had lunch and did a little more schoolwork but then Miriam noticed that it had stopped raining once again and the forecast had changed! Instead of rain our forecast was simply for clouds! So we decided we'd better make another quick visit to the park. We brought along a towel, which Miriam sweetly used to wipe off every swing and slide at the playground, but it didn't even matter because her siblings played in the sandbox the entire time anyway. 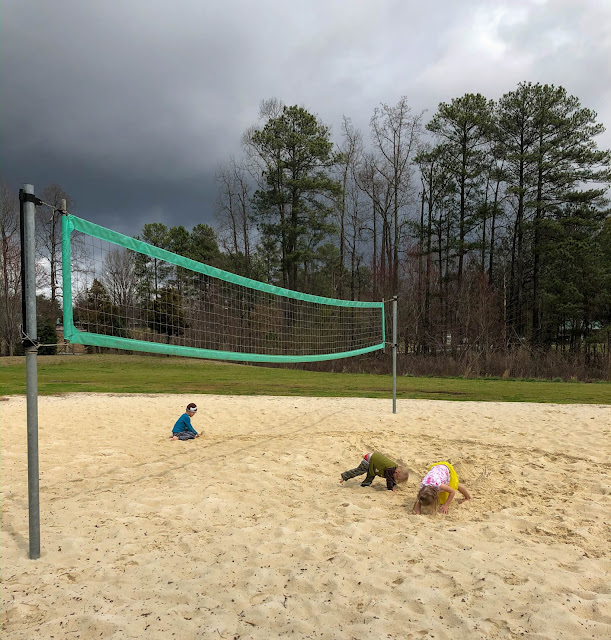 We stayed at the park for several hours and tough the clouds swirled darkly around us they didn't let loose a single drop of rain! It felt good to get so many wiggles out. Some of the children in our family were feeling particularly recalcitrant and/or ornery this morning, so an afternoon of fun and freedom was just what they needed. 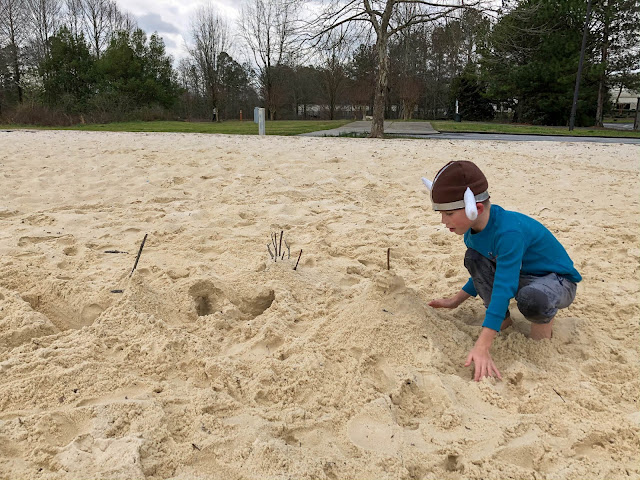 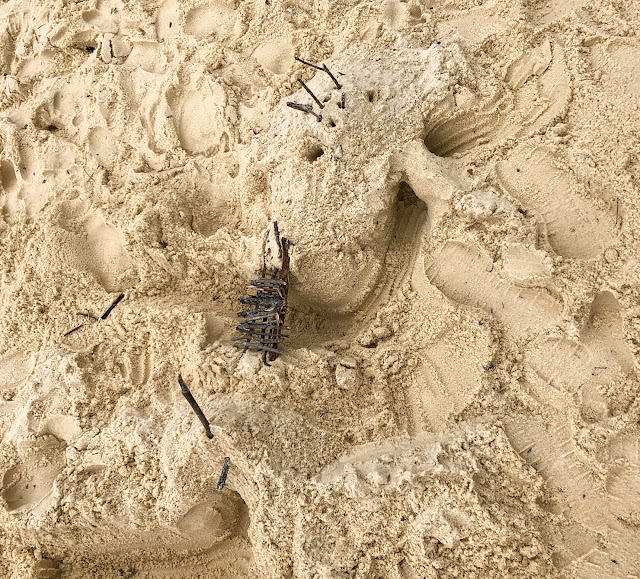 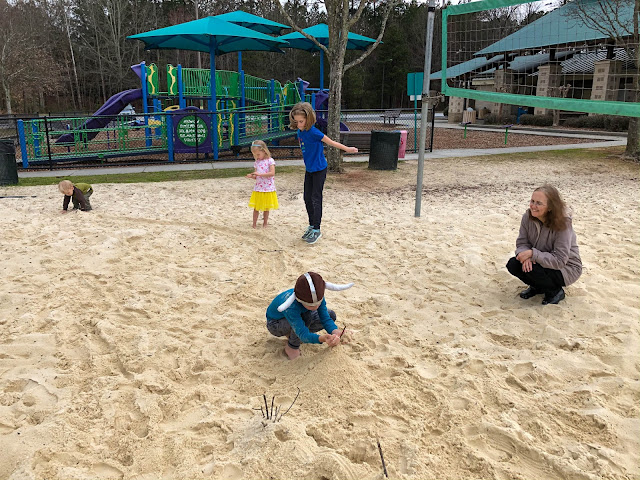 Eventually we were able to tear them away from the sandbox to go for a little scooter ride. The big kids zoomed around and around the pond while Naanii and Zoë completed the loop at a respectable pace and Alexander and I ever so slowly brought up the rear. 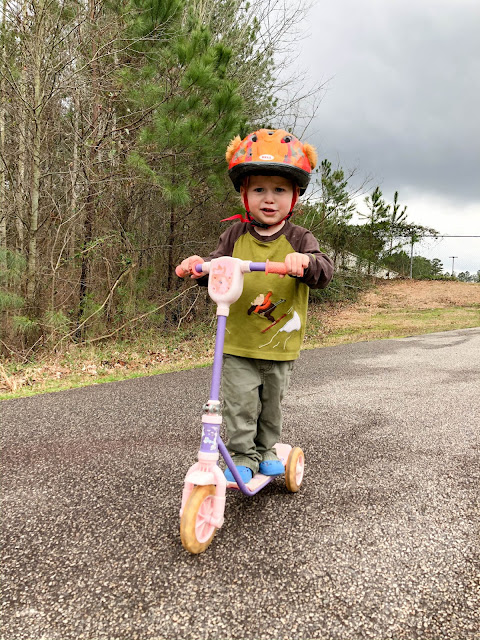 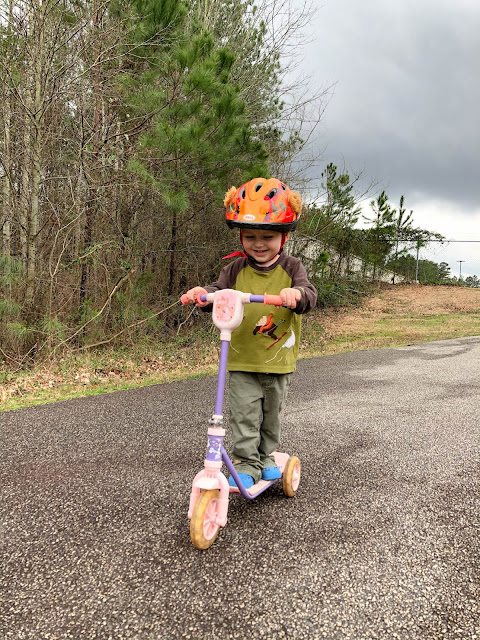 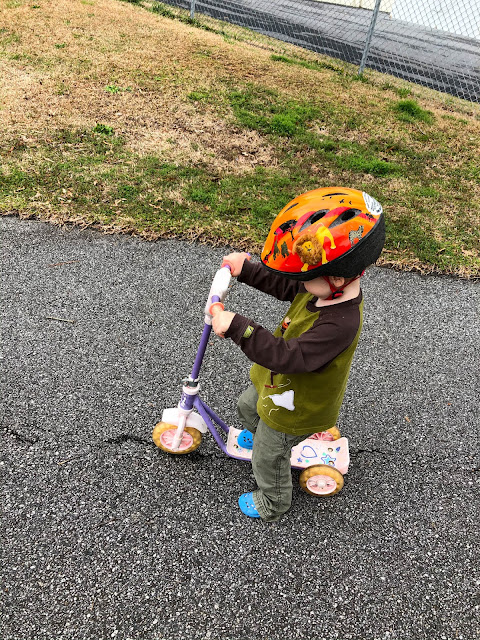 And that's not necessarily a bad thing—going slow, I mean.

After a few times round the pond (for the big kids...it was just once for me and Alexander), the kids decided they wanted to take the path through the woods to another playground. I decided Alexander would have to ride in the stroller if we were ever going to make it there, and then Zoë decided to hop on the three-wheeled scooter because it helps her feel a little more confident than the two-wheeled scooters. That left us with an extra scooter to cart around (though I suppose we could have just run to put it in the car?) so my mom suggested that I go ahead and ride it to keep up with the kids who wanted to go fast and she would push the stroller to keep up with the kids who wanted to go slow.

Benjamin and I ended up leading the pack.

Okay—if we're being honest—Benjamin was leading the pack and I was doing my best to keep up with him. But he had a helmet and I didn't so I was being extra careful of bumps and slopes, trying to make sure I was always in control, trying to make sure I didn't go too fast...and Benjamin had a helmet so he wasn't being as careful (plus, I mean, he's just Benjamin). Well, it's been very wet lately, as you know, and we live in a place where green things like to grow, so the path was—in places—covered in a fresh layer of (rather slick) moss. One such mossy area just happened to grow at the bottom of a slope that was also a turn in the trail.

Well, Benjamin took that hill with all the speed he could muster (he does pretty much everything in full-steam-ahead mode, often to his detriment) and when he got to the bottom where he had to turn the corner to stay on the trail he hit that layer of moss and—to make a split second seem exactly as long a split second is (I was going to say, "To make a long story short," but really this all happened relatively quickly)—his scooter went one way and his body went the other way.

He landed...somehow...and started screaming and trying to pull himself up off the ground and I ran to him (having abandoned my scooter because taking it down that hill didn't seem like a great idea (to be fair, the scooter user manual says to only use them on a level surface (which is silly because we live on a round planet last time I checked))) and helped him finish standing up. I wrapped him in a big hug and let him howl for a few minutes since nothing seemed immediately out of place and when he could breathe again I asked him to show me where it hurt.

I don't know quite how he managed it (I mean, other than the fact that he landed hard) but he has a decent-sized bruise on his thigh. Every other part of him seems fine, but his thigh is very sore. He says it feels like a dragon punched him (if that helps you know how he's feeling). But he soldiered on and managed to limp his scooter the rest of the way to the park with Naanii and Zoë and Alexander.

Miriam and I scootered back to our original playground so we could take the car to meet everyone at the second playground (since I figured Benjamin wouldn't want to make the long trip back to the car in his condition).

The good news, I suppose, is that he played very quietly this afternoon. He didn't run around the house like a hooligan or anything like that...so...there are perks.
Posted by Nancy at 12:11 AM