I'm reading them The Adventures of Tom Sawyer in the mornings, a book Grandpa began alluding to a lot when we lived with him, but a story my kids were somewhat unfamiliar with. We came across an interesting quote, all the way in chapter two (which is where we are).

Tom Sawyer learns that "in order to make [someone] covet a thing it is only necessary to make the thing difficult to attain."

We discussed that quote in light of Rachel foisting her jobs on her younger siblings (she is very good at this, which is why Grandpa started calling her Tom Sawyer in the first place), as well as how it's making people behave somewhat crazy during this pandemic, as well as how it made me need peanut butter when I lived abroad even though I can go months without touching it in the States, and how if I ask my children to play upstairs they will contrarily say, "OR downstairs!" but if I ask them to play downstairs they will, of course, say, "OR upstairs!" (And we also discussed Tom's little tricks to convince his little friends that doing his jobs was a privilege).

After this lengthy discussion, I told the kids to write a response. Benjamin was having a particularly unfocused day and this is what he wrote:

This does not really go into my life even though I am in a pandemic and toilet paper, hand sanitizer.

And that is...just it. That's what he wrote.

(Brains On is one of his favourite podcasts.)

He spent a few minutes amending his response and came up with this:

I am in a pandemic with COVID-19. People are racing to stores just for these simple things: toilet paper and hand sanitizer and food. What?! I know this can be funny but for the people doing it? No. Not for the people that are doing it. They think they are going to run out.

A much better response. And, really, he's always better at discussing answers than he is writing them down. He has excellent thoughts in his brain...it's just hard for him to get them down and toilet paper, hand sanitizer.

So, the kids were unfocused and fairly feral today and I decided we should go for a walk.

Alexander has reached that age where he doesn't think he should have to sit in the stroller all the time. He wants to walk! But he's also too little to walk the whole way sometimes. But he's also too big to carry all the way sometimes. So he often ends up walking while I push the empty stroller and then he climbs in for a few minutes and then he wants back out again and it turns into this whole in and out and in and out and in and out escapade. And I try to be a diligent mother and buckle the straps all the time but today I forgot to and before I remembered that I had forgotten to buckle his straps I got distracted by the children bickering behind me and wasn't looking where I was going (which was straight ahead on the sidewalk) and I hit a bump on the sidewalk and tipped Alexander out onto his face.

And I already feel super badly about it (it was more than silly to forget, I'm a terrible mother, etc; I've got this whole internal monologue going) so quiet on that front, please.

I scooped him up and he had blood pouring out from who even knew where. His nose? His mouth? Sure. Yes, his mouth. Maybe also his nose. But where in his mouth? His lip? His teeth? It was hard to tell what was going on, really.

I barked at the girls to check the stroller pocket for something—a tissue or whatever—and kept examining him. And I swear one of his front teeth was pretty wiggly. So I nearly started crying, but am trying to hold it together while he and I are getting bloodier and bloodier.

The girls finally produced a clean napkin and I held it on his face for a minute.

I pulled it back to look at it and he saw it and when I went to put it back on his still-bleeding face he screamed, "DON'T! THAT'S YUCKY! MY MOUF HURTS! WHY DOES MY MOUF HURT?!"

I was like, "My dude. Do you not recall? I just dumped you onto the sidewalk..."

I picked him up and carried him home, screaming all the way, while Rachel pushed the empty stroller and Zoë reluctantly skipped along whining about how mean I was for not letting her hold my hand. But honestly, my arms were full! And we were a good half mile away from home when we fell (I called Andrew but I wasn't thinking very clearly and instructed him to call our dentist rather than picking us up and calming us down first, so he did, and then realized that he should probably come pick us up, so he met us when we were just about home anyway) so it was quite a ways to go and I was trying to go fast and, frankly, this kid is quite a bit heavier than he was the last time I was forced to carrying him, somewhat injured, for a long distance (when Andrew and he fell off that little waterfall and our hiking backpack broke—man, Alexander has history).

We got home and find out Andrew hadn't been able to reach the dentist so I hand him Alexander and try to Google what to do when you accidentally knock your toddler's teeth loose but I can't because I'm shaking too hard and Alexander is still screaming and we're all covered in blood and it's just not good.

OH! I forgot to mention that we ran into some neighbourhood kids (who've been trying to get Benjamin to play with them—but we're social distancing, yo!) and they had their dog out and so when their dog saw our little circus bustling down the street it ran right at us.

It was probably the most unimposing dog I've ever seen. That or I was all hyped up on adrenaline because I was like, "I am not even taking this today."

Zoë ran shrieking up the street, just absolutely screaming like a banshee because she thought this little fluffy-doodle was after her and I just stood my ground, holding my still-wailing, still bleeding toddler in my arms while this dog was jumping up and barking at me and I snapped at the kids, "BOYS! I just can't even with a dog right now. You come and get 'em now."

And they ran over and chased that dog down...and then asked if Benjamin could play.

"He cannot," I said. "The baby is hurt and bleeding and we have to get home now."

And we left. And now they probably think I'm a crazy lady. But...I mean...it's fine. Can we all just be proud that I didn't follow in Zoë's footsteps and run down the street screaming when that dog came at me?

So I don't know if I was shaking from shock or exhaustion or both but by the time I got home I was a shaking, bloody mess. But Alexander was far bloodier. 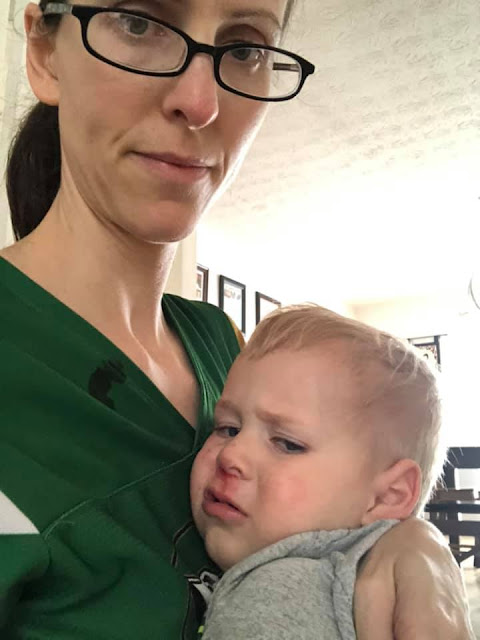 Here he is after we got him cleaned up a bit. We learned (our dental insurance had a rather informative site) that often teeth will reconnect on their own (but that we should still get him checked out). We scheduled an appointment online but weren't ever able to get ahold of anyone in the office so I was still fairly freaking out about things when my friend Jenni commented on Facebook to say that she went through similar things with most of her boys and that the tooth always reattached on its own. Every time she would be amazed because every time she would be worried about it until she was sick but all their teeth have been fine (and I'm just praying that's the case because I feel a little sick about it).

I think Andrew must have told him that the popsicle would help him feel better. Turns out, popsicles are not a panacea for dental trauma. It did not make him feel better.

The problem was that we had wiped his face. He has a bit of road rash from his fall. The area under his nose is particularly red. I took a picture of him and when he saw himself in the phone screen he said, "Ew! I don't like it! Don't show me me!" 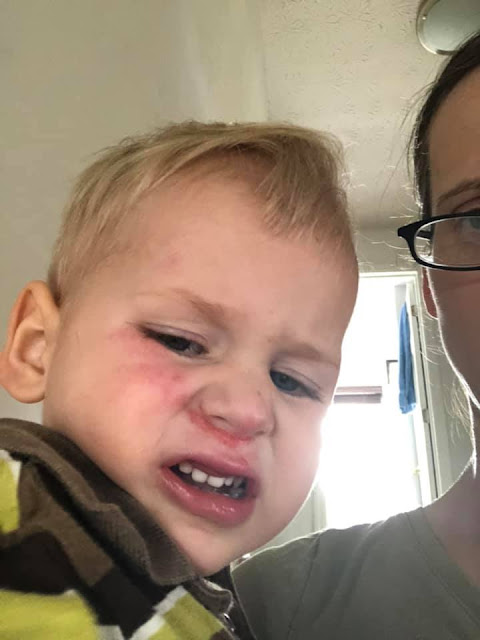 There wasn't much else to do for him so we sat on the couch and watch Daniel Tiger until dinner was ready. And then he only wanted applesauce (but also ended up eating a little bread and cheese) and left the table early, requesting more Daniel Tiger because his mouth still hurt.

He started to feel better after dinner, though. He perked up and wanted to play and run around a bit. He even smiled for a picture (of course, he didn't see himself in the screen this time and he was getting some pre-bedtime snuggles from Mommy, so that probably helped him not freak out at his reflection). 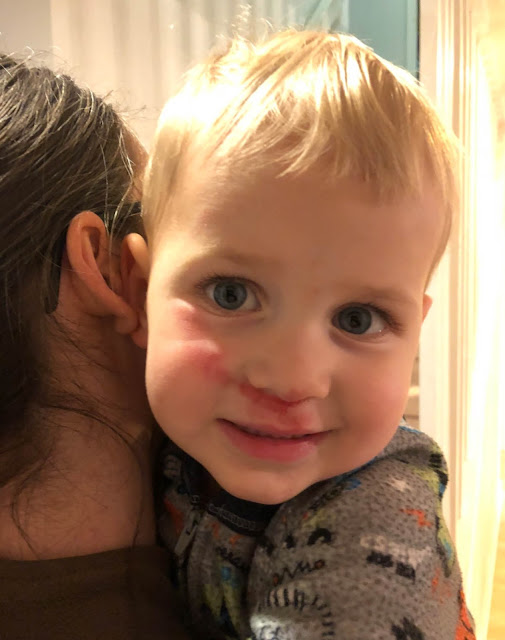 Miriam has started calling him Jo-Jo Rabbit (yes, we let the older girls watch that movie; I originally said no but then they pointed out that I let them watch Life is Beautiful and could Jo-Jo Rabbit really be worse than that (I can't remember if they ever got around to watching The Boy in Striped Pyjamas with Grandma...that was one I think she was waiting to watch with them when they got a little older)).

I am really hoping we'll get the all clear from the dentist tomorrow (though I really hate to be going out during this time of self-isolation, I feel like this is a somewhat necessary outing).
Posted by Nancy at 12:19 AM