Have you seen that prank going around called the "poop challenge" where parents ask their child to bring them some toilet paper while they are sitting on the toilet and then they "accidentally" wipe a brown substance on their child to see how they react?

Spoiler: they react by screaming, gagging, and sometimes even throwing up.

Are we really that surprised?

Anyway, Alexander pulled his own little poop challenge prank on us this afternoon! 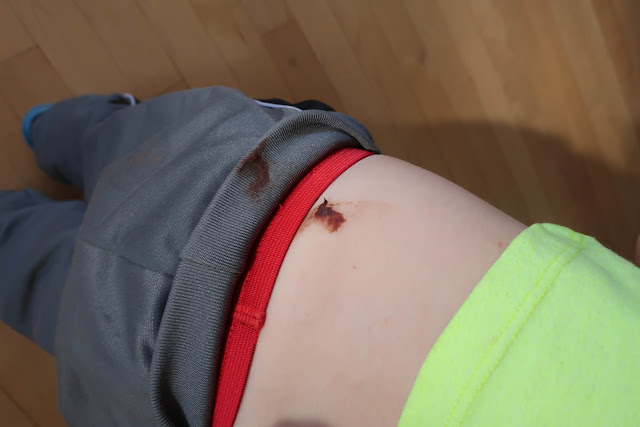 We were all a little worried about what we'd find in his pants after seeing this, but it turns out he only spilled a chocolate chip in his car seat (from the granola bar he'd had as a snack on our outing this afternoon) and it melted onto his backside. Phew!

He's been exerting his independence with the potty lately and it's been...a bit of a fiasco.

The other day while I was vacuuming the carpets in our living areas, Alexander disappeared and then reappeared several minutes later wearing no pants but new underwear...backwards. I didn't completely panic until he started climbing onto the piano bench, giving me a full view of his backside. His thighs were absolutely slathered with poop (real poop, not chocolate this time), so I started yelling things like, "No! Stop! Baby! Oh, no! Oh, no! Stop! Get down! Don't move!" And everybody came running (because everybody's at home these days) and we worked together to get things cleaned up.

We had to take him potty, find his dirty underwear, clean his baby potty, basically give him a bath, and spot clean the carpet where he'd sat down to put on his fresh undies and again where he'd sat down to begin his descent down the stairs (thank goodness he turned around to slide down on his belly because if he'd decided to slide down on his behind we would have had a much bigger mess on our hands)!
Posted by Nancy at 7:32 PM