We made some origami shamrocks last night while talking about allegories, such as The Olive Tree and the way St. Patrick is believed to have used three-leafed shamrocks to teach people about the godhead. Each shamrock is really made out of four origami hearts, so we talked about how Heavenly Father, Jesus, and the Holy Ghost work together to get God's work done (and work with other people as the fourth leaf—the prophet, us, etc—to further the work as well). We also talked about how we worked together as a family to put together each shamrock. 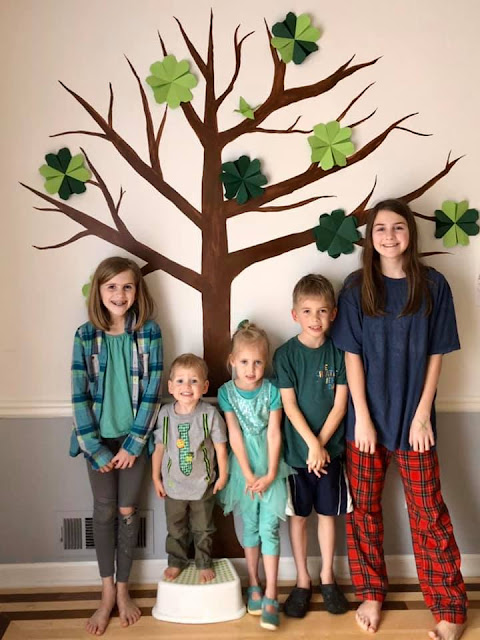 Rachel and Miriam stayed up late(r than the little kids) to make golden coins (from construction paper) and then hid them around the house for the kids to find in the morning. I think the kids had fun hunting them all down, but it also got them feeling a little fussy and competitive.

Zoë came storming into my bedroom about how Benjamin found six coins and she "only" found twelve.

"Well, if that's true then you found more than him. So why are you upset?" I asked.

"Because I only have twelve and he has six!"

And she counted out twelve coins.

"Alright. You have twelve. That's awesome. Twelve is a good number. It's twice as many as six. If anyone should be upset it should be..."

Then Benjamin stormed into my room and threw himself on the floor writing in agony.

"Zoë found twelve coins and I only found six!" he moaned.

"Would it kill you?" I asked (she'd been repeating all sorts of "finders keepers" lines before, which hadn't been helping matters at all).

"Doesn't matter," Benjamin said, brandishing a couple of crisp, green construction paper bills he'd clearly just made. "These bills represent five gold coins each. So that's a grand total of sixteen gold coins. Six and five are eleven, plus five is sixteen. I am so rich."

He carried them around in an actual, literal pot (like a saucepan from my cupboard) the entire day. And for some reason this fixed Zoë's attitude as well. I think she was only griping because Benjamin had been griping. She has no concept of numbers that big yet.

Alexander was happy to get any sort of anything at all and proudly carried around his little baggie of gold paper coins the whole day. "Mimi wrote my name on my bag," he told me every five minutes the whole day long.

I printed out some St. Patrick's Day activities for the littlest kids to do while the bigger kids did their school work and we tuned in to Mo Willem's Lunchtime Doodle (which he's producing specifically for all the zillions of children stuck at home during this pandemic (such a sweet gesture that so many big personalities are doing)).

And Andrew made bread bowls and soup for dinner, as he has done on St. Patrick's Days of yore, though Benjamin pointed out that he neglected to dye the bread bowls green this year. But with the news cycle as it is, we're lucky we're remembering to do anything.

So it was a pretty good day.

(Rachel is boycotting clothes and intends to stay in her pyjamas until we're finished social distancing; she would also like it noted that her pyjama bottoms have green stripes).
Posted by Nancy at 11:33 PM