In school and out of school

It's possible I've been pushing the kids a little hard this school year. It's possible Miriam has finished nearly 1.5 years of math and that Benjamin is a few short pages away from being finished with his curriculum as well. It's possible we finished our science textbook this week. It's possible to fit a lot of information (and work) into 4.5 hours every day and I've come to the conclusion that I've definitely pushed my children a little too hard. I just reviewed Georgia's AKS (Academic Knowledge and Skills—why, oh, why didn't they just call it Academic Skills and Knowledge?) booklets and although they seemed intimidating when we began this endeavor, I found myself nodding my head as I read through them. Yes, yes, yes. We've done that.

Admittedly there were a few things in the sciences that we didn't cover, but I think we went a lot farther in depth with life science this year and so didn't get to earth science at all. The kids have asked to do earth science next year, so we'll be hitting all of those milestones then. I'm not really worried about that part.

But I've learned that I can definitely chill a little bit as a homeschool administrator. I think next year will be easier for me to split my curriculum up so I can parcel it out throughout the year because I will be working with the full school year (rather than just...some of it). I'm considering doing a 4-day work week for the kids, and giving them Friday to just explore things on their own a little bit, which will mean extending hours a bit Monday through Thursday, but that shouldn't be too terrible (since I think we typically do more than the required 4.5 hours per day anyway, just because we get sucked into doing things like reading and identifying geodes and things like that). I'm also going to make more of a conscious effort to include physical education and music and art in our school days.

This school year I've been insisting that first we get our work done and then we can do whatever—play basketball or have a ukulele jam session or paint a picture. But really those things are part of a public school day, right? And an important part, too, I believe! I've just been so concerned with doing the academic portion "correctly" that I forgot about...pacing...and well-roundedness...a little bit.

To that end, we spent some time at the park this afternoon playing frisbee and painting and walking by the river...after we'd finished with our school work...because I'm a stickler.

Benjamin wanted to play frisbee when we got to the park. That the kids call Paradise Island even though it's not an island; they just like it because it's felt rather secluded when we've gone because no one else is ever there, though today we did have some curious walkers stop by to see what we were doing. The other kids all wanted to paint right away so I set them up with our paintings supplies before chucking the frisbee around with Benjamin. 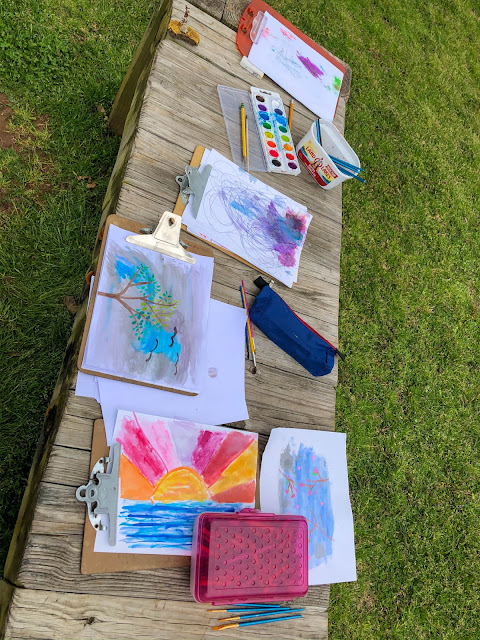 It was a rather blustery day and we were using a big "monster flying disc" and when I threw it it ended up soaring right over to my poor painting children and—naturally—knocked over their rinsing water. It was a pretty amazing accident!

Here's Miriam showing off the paintings she did: 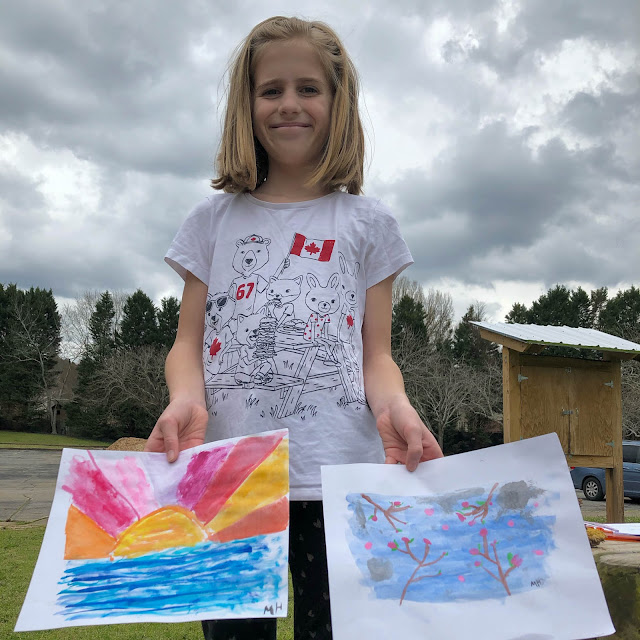 After playing frisbee we decided it was too windy to continue so Benjamin started bouncing around on one of our "bungee jumpers," but eventually tired of that activity as well.

"I want to paint, too!" he said, so I set him up with some supplies and...turns out he literally wanted to paint "too." I don't know why. 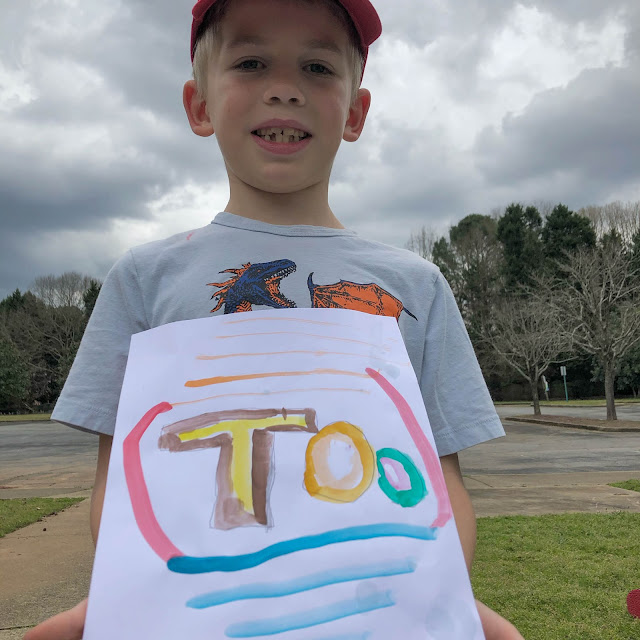 Here he is with a little moss world that he discovered/contrived (it didn't have the rock on there, but he added it for aesthetic purposes): 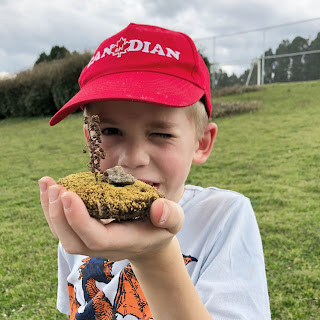 And here is just a cute picture of Miriam showing of her freckles: 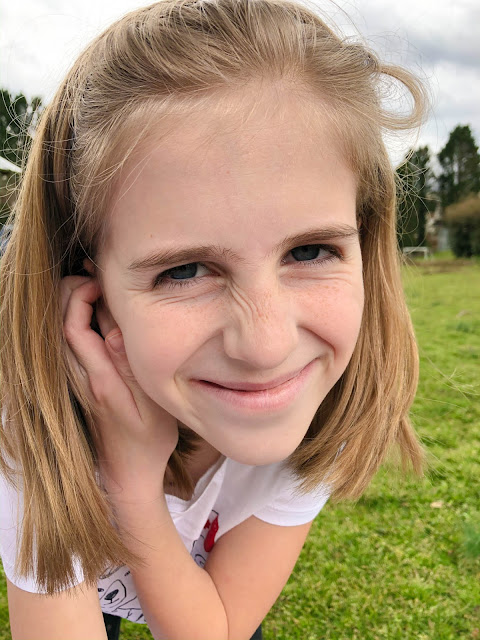 We can tell spring is coming because there are more and more bugs out every time we go outside (which has been quite a lot this week, hallelujah—even though it's still been raining every day it hasn't been torrentially pouring all day every day so we've been able to venture out of doors). Poor Alexander got a few ants in his pants (and shirt)—not so many that made me think he'd been standing on an anthill while he was painting, but just a few stray, angry ants. He wiggled over to me, pulling on his clothes, and crying, "Ow! Ow! Ow! My clothes are hurting me!" So I had to strip him down, basically, and pick a handful (meaning, like, five) of little biting ants off of him, poor thing. 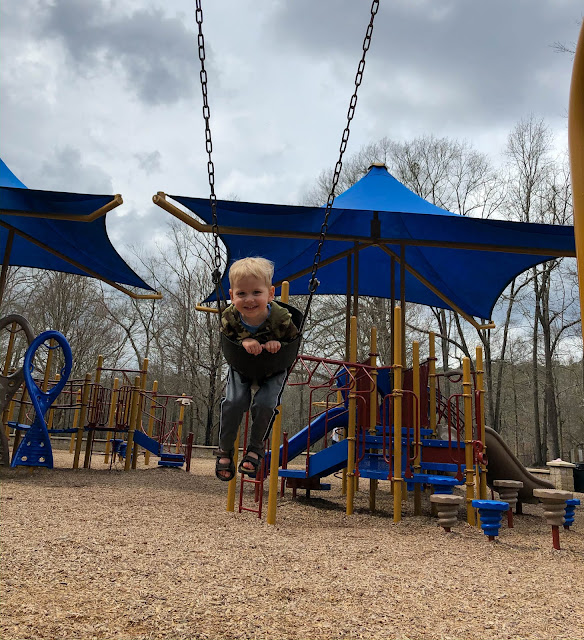 The playground was mostly deserted, which, is fair because it was raining off and on. Our neighbouring school district is out due to a confirmed COVID-19 case in their school system but our school district has yet to close anything down. They are opting to be reactionary rather than preventative (which is rather the way the American health care system likes to work (spoiler: preventative measures are an excellent way to avoid costly reactionary measures)). Still, the park was more or less empty so we didn't feel like we were really out mingling with the general population.

Here we are by the river; it's so high and swift these days. Benjamin keeps asking me when it will be low and slow but I honestly can't tell him (because I honestly do not know). I imagine, however, it will be whenever it stops raining so much.

These two little people got soaked, of course. They wanted to walk all the way down the stairs (you can see that several stairs are completely submerged) but I told them absolutely not. Still, they managed to get plenty wet. 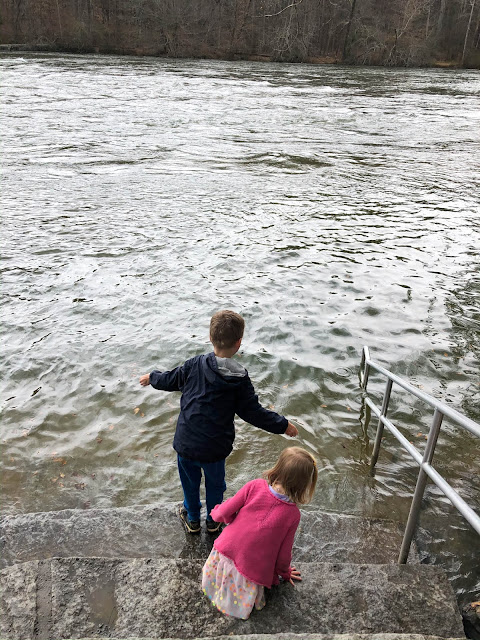 Miriam and Alexander were a lot more cautious (thank goodness, because I can't be mortally worried for too many people at once): 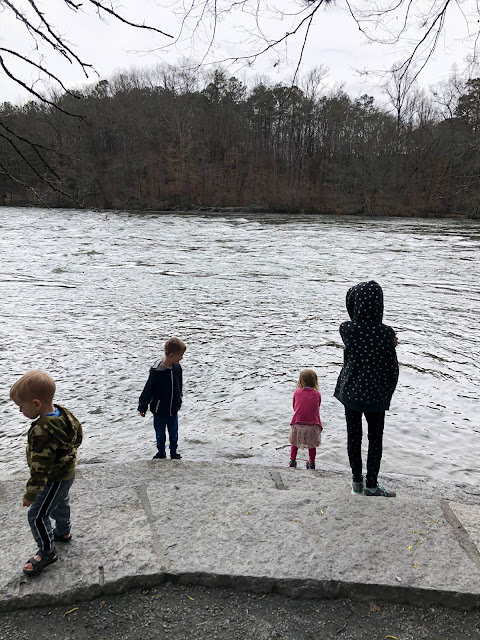 And there's our cue that it was time to go—big, fat raindrops falling into the river (and onto us). Benjamin wanted to stay until we noticed the level of the river rise...but I told him absolutely not. 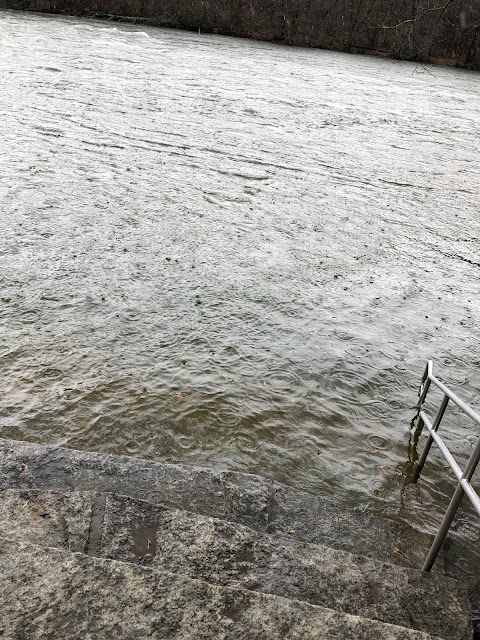 I probably say "absolutely not" far too often, but this time it came with an explanation about just how much it would have to rain for us to notice the river getting deeper. Any sudden noticeable change in the depth of the river would likely be from a change in the flow from the dam, not from a little rainfall (or even from a big rainfall). Plus, I say "yes" often enough. An "absolutely not" every once in a while (or even several times per day) isn't going to kill him.
Posted by Nancy at 12:25 AM