With 17,000+ new cases confirmed today, the United States has overtaken China and now leads the world with the total number of cases of COVID-19. I'm not sure that's a record we wanted to have, but there it is. So we're continuing to stay at home, with life looking normal (more or less) but feeling strange.

And so I bring you some of my favourite recent mispronunciations from my children:

Benjamin was talking about his Einsteins at dinner a few nights ago and it took us quite a long time to realize that he meant "intestine."

I suppose this only makes sense if you understand that, as a Canadian (4000+ COVID-19 cases there, for the record) I grew up pronouncing intestine as in-TEST-eyen (not in-TEH-stin, the standard American pronunciation (and the British one, too, apparently)). I actually still pronounce it this way and so my children also tend to pronounce it this way, which is how Benjamin came to confuse the word with Einstein's name. Had he been speaking a pure American dialect he never would have confused the two words.

Another night at dinner, Benjamin was talking about how it was ridiculous that Hitler had considered Jews to be an undesirable population. "Jews are anything but weak!" he said. "Like, once they got away from the gecko they actually fought against the Nazis. Did you know that?"

"They got away from the gecko!"

There's this one house way up the street that has continually drippy eaves which empty into the street gutters, so sludge tends to grow in the gutter between their house and the street drain. It's black and slimy and horrible looking right now, but sometimes it turns a pretty green colour.

Both Zoë and Benjamin consistently call it "allergy" instead of "algae."

"I have to be so careful balancing on the curb!" Zoë will say as she walks along. "I don't want to fall into the allergy!"

To be fair, spring has officially sprung down south and everything is covered in a healthy (or unhealthy, depending on how you look at it) layer of pollen, which is causing those with allergies quite a lot of grief.

The kids have been interested in reading about plagues lately. For...reasons.

Miriam wrote a paper on the ebola virus and one morning Benjamin announced that he had been reading "about the Black Plag-you," rhyming the word with "ragú," like a pasta sauce, or bayou, like a swamp.

We let him pronounce it like that for quite some time before we told him that it was just the Black Plague.

Alexander was drawing pictures while the kids were doing their schoolwork the other day. He decided that one of his creations was worthy to be hung on the wall, so he asked for some tape so he could put it in a spot of honour. Unfortunately, the tape is kept in Daddy's office.

Usually when we're home during the day, Daddy is not and we have free reign in the office. There's a second desk in there where Benjamin sometimes works. There are rulers and staplers and tape in there. That's where the printer is (we use that quite a bit). In short, we usually go into Daddy's office a billion times any given school day. But with Daddy working at home we've been trying to limit access to that room, so I explained to Alexander that the tape was in Daddy's office and we would have to wait to get some.

A few minutes later I caught him holding his paper against the wall, grunting with effort.

"It not 'erking!" he sighed, letting the paper drop to the floor.

"What's not working?" I asked him.

And then I snapped a picture of him, because he was so cute standing on his tippy toes, thinking such a thing would magically help his paper stick to the wall. 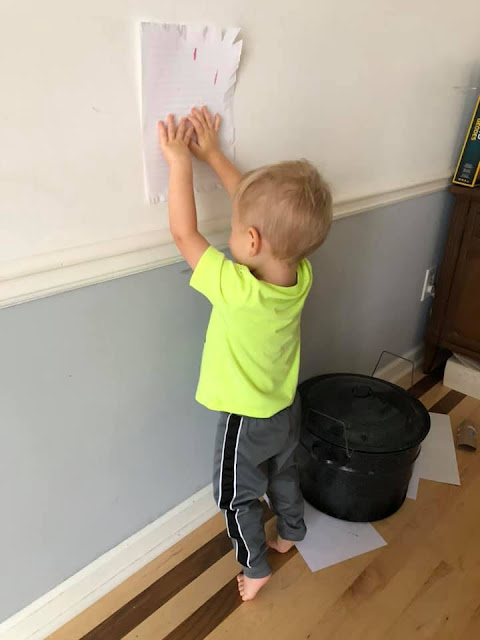 * His office completes one of the "loops" around our house, which the little kids often run around. But now that that loop is closed off they only have the kitchen/dining room loop open, which means they pass by the trying-to-do-schoolwork children twice as often as they used to during their loop-running time. Which is...lovely.
Posted by Nancy at 10:15 PM