An Ear Ache and a Visit from Friends

I knew something was wrong this morning when I put Rachel down on the floor after her first-thing-in-the-morning snuggles and she sat there, perfectly still, for about five minutes. Then she crawled listlessly to the shelf and, ignoring all of her toys, pulled a single volume off the book shelf and held it up to me.

I picked her up and read the story to her. When the story was over she didn't squirm to be put down or demand that I start from the beginning again--she just leaned back into me and cuddled.

She'd been feeling a little warm since yesterday afternoon, but nothing that really worried me. I first noticed she was hot when Uncle David took her out of her stroller in the library. I thought perhaps she was just warm because she had her pullover on top of a long sleeve shirt and had just been playing really hard. The fact that she was still warm when we got home, and then still when she woke up in the morning concerned me, but she'd been acting completely normal.

I thought, perhaps, that she was just teething because she constantly has her fingers or thumb in her mouth and she chomps away at it and has been the queen of drool lately...

But when she woke up from her morning nap, seriously like five minutes before Crys and her kids came over, she was burning up. She was so grumpy the whole time they were here--not herself at all, as anyone in our ward can attest. She spent most of her time on my lap, leaning back and resting her head. She hardly paid any attention to either of the kids and cried whenever the slightest thing happened. Completely out of character. It was nice to get to visit with Crystal--we haven't seen each other since Rachel was just a few weeks old!--I just wish Rachel had been feeling more like herself. 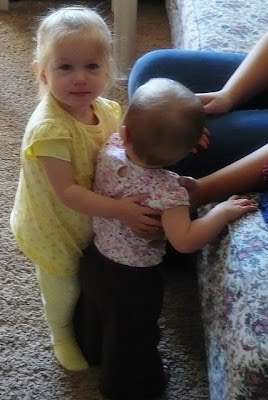 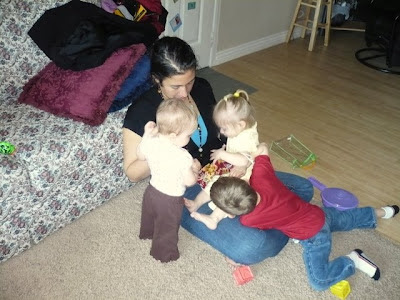 Everyone pile on Crystal! 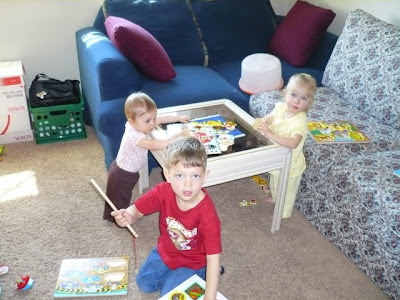 Playing with puzzles
After they left, we had a nap...from 11:30 until 3:00! It felt so nice because she had been up most of the night and, although she would stir around and whimper every few minutes, her nap was much needed by both of us.

That's what made me want to call the doctor's office. It was just so weird. Not only had I cuddled her more today than she's ever cuddled in her whole life...but her balance was off.

He told us she looks like she has an acute ear infection in her right ear. I had suspected such a thing, but it was nice to know which ear it was in since she was just acting like her whole head hurt, rubbing her hands all over her head. He said it will probably clear up on its own, but gave us a prescription to use in case she's still acting the same or worse in the next day or so.

The doctor also said that should sounded like she might have a little case of bronchiolitis, even though her oxygen levels were at 96%. It's probably left over from the runny nose that she's had for the past forever. I thought she was better because she hasn't had a runny nose for about a week, but apparently she's still suffering from that. He recommended a saline nasal spray to help loosen things up and help clear her passages. You'd better believe she loved having us use the bulb saringe on her nose after we'd filled it up with saline solution...since it takes both of us to blow her nose on an ordinary day.

I started putting the drops in her nose but kept missing and getting saline solution all over the place.

"You're supposed to put the nozzle in her nose," said Andrew.

"Oh? Ew! You do it!" I said. So we switched positions and I held her still while Andrew took over.

"How can you even tell if any is going in?" I asked.

So now she's in bed. Hopefully she'll feeling better soon. It was kind of nice to have a cuddly baby for a day. One that didn't mess up the entire house and demand playtime and lunchtime and so forth. But it was also rather sad. I missed my little happy Rachel. Today's Rachel was sad and pathetic. I mean, I only had to pick up her books and toys once--after Crystal and her kids left and they did half the work, anyway--I haven't had that happen since before Rachel learned how to play.

(PS: I'm sorry Crys! I didn't think she was actually sick until after we woke up from our afternoon nap and she was acting really funny! I hope she didn't pass anything on to your kids!)
Posted by Nancy at 11:26 PM