For playgroup today we headed out to Thanksgiving Point to play on the farm. Heather has a pass and any guests that she takes get in for half price, which was really nice for everyone who came!

When we came through the barn we immediately headed towards the nearest animal: cows. And of course, since there was a little baby calf we all crowded around it. It was a rather friendly and curious calf, staying close by the fence and poking its little head through to greet all the children. Rachel usually likes animals. She squeals with delight whenever she sees a puppy or kitty and loves to touch them or have them bark at her. The cow, however, was a little too scary for her.

I tried putting her close to the fence so that she could look at the cow, and touch it (if she wanted), but she just stuck her little bum out and put her arms straight in front of her, rather defensively. She kept scuttling away from the cow, trying to get back into my arms, all the while letting off nervous giggles. She wouldn't touch the fence, she wouldn't stand up. She was so scared, petrified might be a better word choice, she was almost shaking.

She just takes after her Great Grandma Conrad, I suppose. Poor Grandma had a hard life. You see, she, too, was afraid of cows. Now, ordinarily this wouldn't cause too much of an issue, but Grandma grew up on a dairy farm so it was kind of a big deal. She heard once that you could communicate with animals, so she started talking to them while she was out doing her chores. She would look the cow in the eyes and say firmly, "You don't want to come over here." And for the most part the cows listened and left her alone. Of course, cows were never really known for being very social...or aggressive. Mostly they just sit around and chew their cud and give milk. 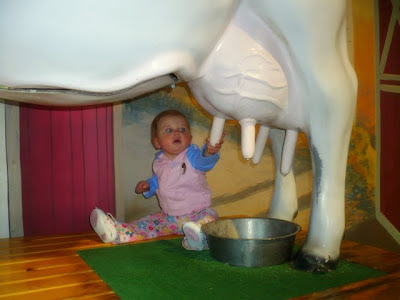 Rachel "milking" a cow--you squeeze it and water comes out...
But I suppose everyone has to be afraid of something. And cows are really big, I'll give you that!

She was a little leery of the llama as well, but she started to warm up to things after we'd been there a while. She got used to the fact that everything there was several times her size, excluding for the pygmy goats (two little kids were born recently and they are so adorable!). 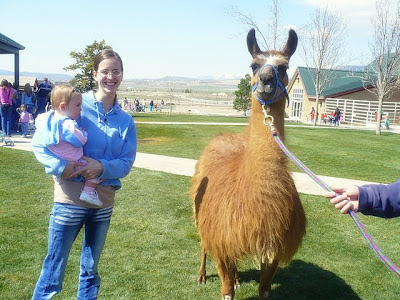 Rachel liked the sheep but she wouldn't go up to their pen until they went to see some visitors on the other side. Then she waltzed right up and grabbed onto the gate like she was the bravest girl in the world, which everyone might have believed had she not flipped out when the sheep came back. 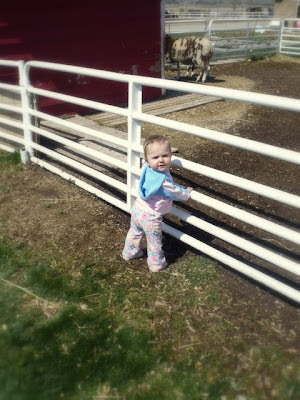 The goats were much easier for her to admire because of the link-type fencing that they had attached to the rails. I think she recognized that there was no possible way for the goats to get her. 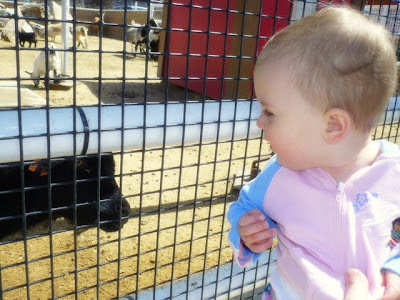 Rachel and a goat 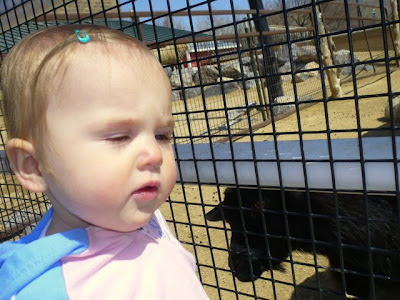 After we had lunch we went on a wagon ride, which I'm sure Rachel would have thoroughly enjoyed if she hadn't been sleeping the whole time. She fell asleep during lunch and napped right through the wagon ride, which was fine with me since it was well into the afternoon by this time and she hadn't taken a nap yet. 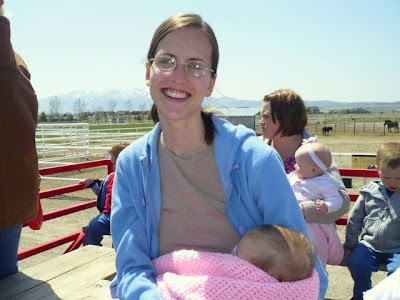 Rachel and me on the wagon ride
A couple of huge Belgians pulled the wagon, each one of them weighing close to a ton! In my opinion horses are much scarier than cows. Not only are they several hundred pounds heavier than a common dairy cow, they are a lot more curious about people. As a general rule, if you don't bother a cow, it won't bother you. The same thing cannot be said of horses. They are much more high maintenance than cows are, always wanting treats and to be brushed and other such things. They seek out company.

I don't know about you, but it's much scarier for me to have a 2000 pound animal sniffing me for treats than it is to have a 1200 pound animal lazing about in a field. Not that I'm really afraid of either...it's just that being afraid of a horse makes more sense to me.

Rachel, however, doesn't seem to agree with me. She thought the horses were much cooler than the cows, even though they were sticking their heads over the fence and socializing. One of these huge horses even licked one of the twins' head (I don't recall which one). 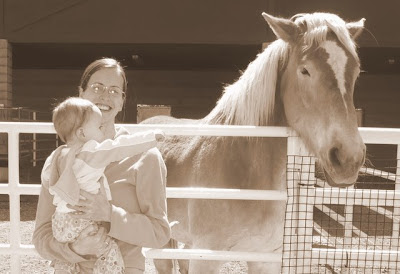 Before we headed back into the barn to learn and play some more, I took some pictures of Rachel with the tulips. Thanksgiving Point also does a little tulip festival, which we haven't gone to, and I think that this little bed of tulips was supposed to be an advertisement of sorts for that. Rachel thought they were very pretty. 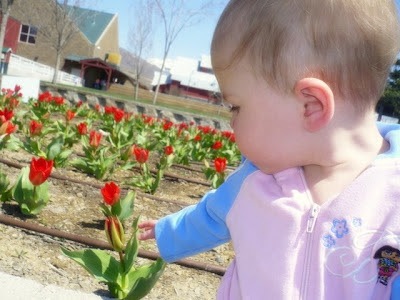 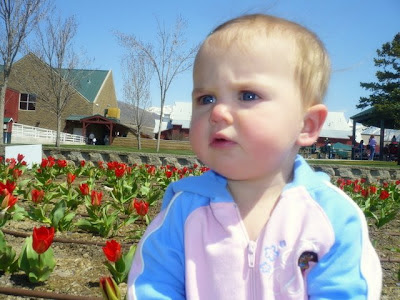